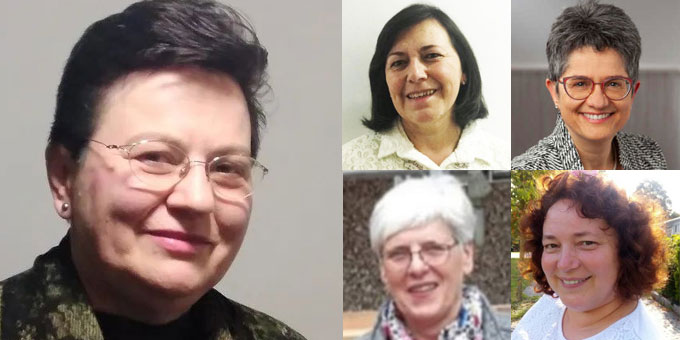 During the days of 27.12.2021-8.1.2022 the Chapter of the International Schoenstatt Women’s Federation took place. 25 representatives from 7 countries (Argentina, Brazil, Chile, Czech Republic, Germany, Poland, Puerto Rico) met and deliberated on the most important matters of the community. The meeting took place in a hybrid format: some members were able to be present on the spot in House Mariengart in Schoenstatt, Germany, while most joined via video conference – a new experience. —

A community in the process of re-founding

The Women’s Federation has been in the inner and outer process of refounding for years, and these concerns were the focus of the consultations.

An important sign on the way to the Chapter was the Decree from the Dicastery for the Laity, Family and Life of June 2, 2021, on the exercise of leadership in the international associations of the faithful, of which the Women’s Federation is one. It limits the terms of office for international leadership to five years, as well as the number of terms. In accordance with the decree, the chapter made the necessary changes to the constitution, and, out of the spirit of the decree, also addressed other structural and spiritual issues and concerns of the community in order to orient the community for the future.

In order to do justice to the tasks of the new foundation, the Chapter voted for the expansion of the Federation`s Leadership from four to five members. The new Leader of the Federation is Dr. Geni Maria Hoss (60), lecturer in bioethics from Curitiba/Brazil, the general course mother, Celia Etchegaray (56), Lic. social worker in the SOS Children’s Village network in Paraguay. The following were elected as council members, all from Germany: 1. Bettina Betzner (55), business economist for social work, director of an outpatient family care service from Nürtingen, 2. Magdalene Windoffer (69), em. social worker from Osnabrück and 3. Brigitte Krompaß (52), director of a day care center for children from Jägerwirth/Bavaria. We wish the new leadership much Holy Spirit for their tasks on the way into the future.

Thanks to the support of the chapter: translators, technology, moderation

The execution of the chapter in digital format was a technical challenge and demanded a lot of patience and concentration from the participants. The technical staff in the background worked hard to ensure, among other things, that the translation channels worked properly and that the voting tool was ready. The interpreters from the women’s communities of Schoenstatt, the Sisters of Mary and Institute Our Lady of Schoenstatt translated competently and tirelessly in German, Spanish and Portuguese.