Fundación 180° [Foundation 180°] – Education for Change is an institution based in Dr. Cocca neighbourhood in Calera, Córdoba Province, Argentina. It is made up of young professionals, belonging to the Schoenstatt Movement and who work on missionary solidarity projects: providing support, generating action for change, creating programmes and activities that promote, stimulate, and facilitate education for change and progress in all sectors of society. The premise for their work is that that education is the fundamental pillar for change. They strive for a more just and inclusive country and society, through participation, striving, dedication and the commitment from all sectors of society. In this regard, Fundacion 180° – a lay organisation – is thought of as the “social arm of Schoenstatt.”

Fundación 180° is involved in several projects: 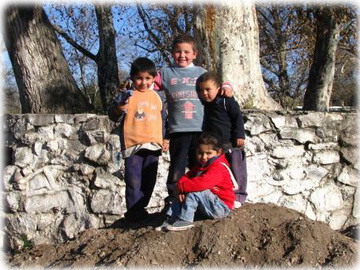 Fundación 180° coordinates a series of educational projects such as the Joseph of Nazareth Complementary Education Centre [Centro de Educación Complementaria José de Nazareth” (CECJN)] in Dr. Cocca, La Calera. In the mornings, the centre runs a crèche and works with children and their families. In the afternoon, it runs a Children’s Club. There are plans to create a workshop where young people can learn a trade, thus providing a comprehensive response to the main problems in that area.

The Centre nurtures and complements the personal and holistic development and formation of young people, giving them a safe place and tools for self-improvement so that they can become free and autonomous people. The Schoenstatt pedagogy also helps them to develop a strong work culture and ethic.

“The main goal of CECJN is to complement the formation of children and young people in the area, giving them tools for self-improvement to further their educational and employment opportunities,” commented the Fundacion 180° director.

Fundación 180° works to form and equip students, and through them, their families. “We are certain that it is only when the institution and families work together and collaboratively that it is possible to develop holistic people who are able to adapt to the changes and demands of society.” This is therefore a community project that actively involves parents in the education of their children.

Steps in the project 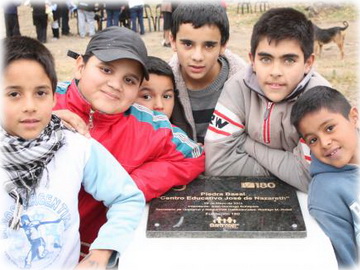 The crèche “Garden of Bethlehem” is the first phase in the work of the Complementary Education Centre. It currently has two salaried teachers and a small group of volunteers who provide wide-ranging support to ensure its success. They work as teaching assistants, giving English and Physical Education lessons. They also work on other once-off projects within the creche, from organising workshops for parents to collecting clothes for the community.

The second phase, which began operating in 2013, is a Children’s Club that provides art, music, body expression and theatre workshops. Soccer and basketball classes, among other sports, are also offered. These activities provide stability for the children and give them the possibility to develop themselves to their full potential through physical education and team sports. The Centre also responds to the needs of the community by providing a school support and a reading club to deal with the biggest problems in the area: the high drop out and failure rates.

The third part of the project hopes to offer trade skills to facilitate comprehensive technical skills, employability, as well as formative and personal skills, so that they can enter the job market and have stable income by working for themselves or for others. 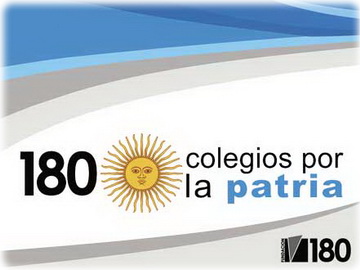 Another project run by Fundación 180° is “180 Schools for the Nation.” This is an educational project that consists of a congress for students in the fifth and sixth year of their secondary education who are selected by their schools. The objective is to reawaken a belief in a new and renewed Argentina. Its mission is to encourage young people to dream beyond their personal goals and work with others to create a more just and human e country, by asking young people to present their experiences about creating and working on projects that generate societal change. In August, a competition in which all the projects are presented takes place and is extended to all schools that want to participate, thereby encouraging each group of students to do something that generates change in a particular area.

This incentive, together with other dynamics, aims to equip young people – together with their class – to develop and implement a plan to improve their surroundings, relationships, the environment or a situation that they, their school or some sector, institution or vulnerable group is experiencing. Through this, the project aims to create awareness among the participants that it is our responsibility to build the Argentina we want and everyone, in the place he finds himself, can do something for their nation.

Awards are given to the students who dream further than their personal goals and implement a solidarity project to build a world around them that is more just and human. The projects are evaluated on the basis of which project effected the greatest change, social impact, and participation of the school and environment, and those with the greatest potential to be expanded in the future.

The project is already in its third edition. So far, there have been 12 speakers, 125 participating schools, 1,500 participating high school students and 75 projects that were presented at the competition.

The Schoenstatt Movement and the foundation jointly carried out several solidarity projects aimed at generating economic resources to collaborate in the formation of children and youth, looking to generate and give a holistic answer to the problems of a lack of resources and education. One of the events was the Solidarity Marathon “Running with Francis.” This is a beautiful initiative that emerges from Pope Francis’ message to “go out to the peripheries,” opening new spaces by announcing the Gospel to “shake things up” in the dioceses, as he asked the young people at the WYD (World Youth Day) in Rio de Janeiro.

Some of the other tasks carried out by the Schoenstatt Movement and Fundación 180° was “What will you do for your nation?” The intention was to find a way for the Argentinean people, on the basis of values, freedom and excellence, to mark the bicentenary of the May Revolution [pre-cursor to the Argentinean War of Independence].

A 180° change through education 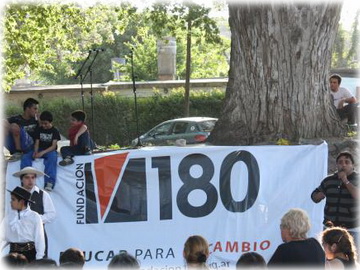 The team coordinator for Fundación 180° explains: “We are a group of young people who dream of a better country. We will not accept anything less. We believe in effort, dedication and commitment by all the people of Argentina to create change in our country. This is how we give thanks for the trust and the permanent support of the people. Thanks for taking the time to listen to us, to take us seriously, for believing in us, and most of all, thanks for putting your faith in a 180° change through education.”

The foundation’s dream is to give life to projects that respond, from within the Schoenstatt Apostolic Movement, to the needs of society, putting the huge treasures we have received throughout our years in the Movement at the service of others. We are able, through God, to change and improve our Argentinean reality, creating tools to promote and improve people’s quality of life through education and a generation of leaders in the various social environments.

To find out more about the Foundation’s work, go to www.fundación180.org.ar (Spanish).