Fortalecimiento Matrimonial [Marriage Enrichment] — FM — is an initiative by the Family Branch of the Schoenstatt Movement in Monterrey, Querétaro and San Luis Potosí in Mexico. The first edition of FM took place on 16 December 1985. Over the next two years, FM held three editions per year, but this was soon changed to two per year. The editions in Mexico are a kind of tradition and date back more than 20 years. From Mexico, it spread to other countries, the first being Costa Rica.

In early 2005, the Costa Rican Movement Director, Fr. Guillermo Muzquiz, invited the members of the first Family League groups in Costa Rica to attend an FM edition in Mexico.

In order to host the first FM in Costa Rica, they invited two couples from Mexico who nurtured this desire and supported the Costa Rican Internal Group. This is how in March 2006, FM I for Costa Rica took place and was limited only to Schoenstatt couples. From the second FM onwards, non-Schoenstatt couples were also invited. The FM editions were held twice a year and by November 2012, 14 FMs had been held. About 30 couples attend each FM edition.

Strengthen couples to revitalise, renew and become aware of the qualities of their marriage partner that they fell in love with and to find a marriage ideal together.

Recognition that this is a different kind of spiritual retreat. A retreat that begins with the positive: what each couple has achieved throughout their shared history. It is a spousal encounter that allows them to deepen, value and improve their marriage relationship.

An enriched family; a united family that grows.

FM is a weekend activity that allows marriage partners to re-encounter each other and God.

It is not a therapy session for couples with serious problems, but a retreat for normal couples with normal problems and tensions.

It also aims to strengthen the couple’s partnership so that they can once again be enchanted with one another, thus renewing their marriage by strengthening it, starting with what they have conquered and understanding that all couples have problems that can be overcome.

Its desire is that the participants can bring God and the Blessed Mother into the daily life of their marriage, as another member of their family.

FM introduces them to Fr. Kentenich’s pedagogy by means of example and the formation of couples, showing practical ways to unite faith and life in the midst of the world.

All of the consecrated members of the Movement in Costa Rica find and recommend possible couples who might want to participate in this special weekend experience. The participants’ group, which in the case of Costa Rica never exceeds 32 couples, due to limited space and the activity occurs twice a year. Up until now, all of the FM editions were full, where people are placed on a waiting list for subsequent editions. Once inside the Retreat Centre, the participants begin a cycle of self-analysis into themselves and their marriage. This is accompanied with input from talks and testimonies, as well as topics for the formation of the couple which are of great use and value to the participants.

This all comes together with a subtle but direct relationship with God and the Blessed Mother, who make the participants understand that their marriages must have God in the centre and that life and faith in marriage go hand in hand.

The creative outcome is that the couples find the things they want to change to substantially improve their relationship, incorporate God into their lives and grow together, with the consequence that many of the participants became more interested in the Movement and joined the family groups.

To date, more than 350 couples have attended FM, a high percentage of which have joined the Movement and are actively participating in the groups, and the different commissions attached to the various apostolic projects within the Movement in Costa Rica. Without doubt, FM has been a huge blessing for the growth and the strength with which the Family League has grown in Costa Rica.

It was powerful to see FM implemented and to live it in another country, see the results of lots of work, great sacrifices, but everything was done with such love and that the result was so extraordinary, it was a real gift from the Blessed Mother for us. 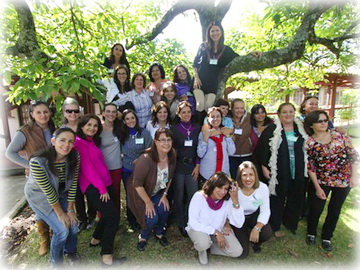 FM has been exported to Costa Rica and Italy. It was also recently implemented in Paraguay, where Mexican panellists participated.

Costa Rica has played a key role in exporting FM. In August 2012, the first FM edition took place in Quito, Ecuador where several Costa Rican couples worked as part of the support group in the Internal Team. In May of the same year, five members of the Family in La Paz, Bolivia, together with Fr. Rafael Fernández took part in the 15th FM. In November 2012, the 14th FM included participants from Guayaquil, Ecuador and Miami, USA. In May 2013, the FM once again went to Bolivia, and this time one of the couples from the previous edition was part of the Bolivian Internal Group. This means that Bolivia will soon prepare their own FM.

Once the contact is made, we recommend that couples who are interested in implementing FM in their country, should attend an edition in Costa Rica. When seven couples have done this, the team will give them a manual that will equip them to host a edition in their own country.

Ecuador is an example of this process. The first FM took place in Quito in October 2012. Various members of the Costa Rican Central Commission went to work in the Internal Support Group and one was a speaker.