A Movement within the Catholic Church 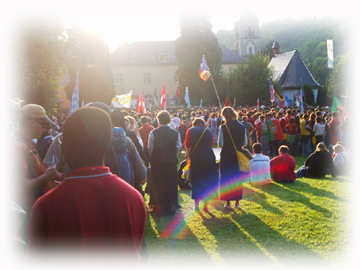 The Schoenstatt Movement is counted among the oldest of the movements and new communities of the Catholic Church. It was founded by Father Joseph Kentenich (1885-1968).

Its name is derived from the place where Schoenstatt began, a neighborhood of the city of Vallendar close to Koblenz. The foundation took place on the 18th of October of 1914 in the “Original Shrine”, a modest chapel dedicated to the Blessed Mother.

Schoenstatt interprets that foundation as a “Covenant of Love” according to the biblical model of God’s Covenant with man. The Blessed Mother, the woman who is close to God and all people, plays a central part in that Covenant of Love. Through that Covenant in which the mutual responsibilities of the covenant partners are very important, the Blessed Mother is petitioned to work especially in Schoenstatt as Mother and Educatress of Christians, that She leads them to a profound and vital love for God and man which is capable of projecting itself into daily life.

The Covenant of Love with the Blessed Mother and the ensuing attachment to the “Original Shrine” became the axis of Schoenstatt as a spiritual center and the spiritual axis and home of the International Apostolic Schoenstatt Movement.

Today, Schoenstatt is international and spiritual center of the Schoenstatt Movement which is present in more than 110 countries. Throughout the world there are some 200 Schoenstatt Centers with their respective “Schoenstatt Shrine” which are replicas of the Original Shrine erected in Schoenstatt/Vallendar.

Schoenstatt accompanies and forms several million people on their journey of faith, especially through the “Campaign of the Pilgrim Mother” (Schoenstatt Rosary Campaign)  which began in Brazil in 1950. Through this Campaign, Mary, and with her the Church, in “seeking pastoral” and committed to new evangelization, reach out to men and women of all walks of life.

The spirituality of Schoenstatt is decidedly marked by a practical faith in Divine Providence in daily life and by faith in the organism of attachments to persons, places, and ideals.

Schoenstatt considers that one of its main tasks is to keep alive the spirit of the Council and to take it to the life of the Church. Its specific work deals with creating pedagogical conditions which promote a faith which can be applied to daily life. Along with other practical means for the education of the personality, the Schoenstatt spirituality offers above all formation supported on life itself; through events, persons, and encounters, the God of life calls us to act.

In the Covenant of Love and in the attachment to the different Schoenstatt Shrines, men and women find a home in the merciful love of God which is a firm foundation for apostolic activity. They surrender themselves to the redeeming love of Christ which urges them toward evangelization.

Father Kentenich emphasized this in harmony with the Council. The objective is to form the world from within and in the Holy Spirit to carry within oneself a religious atmosphere directed toward one’s surroundings. In this way, Schoenstatt secures the creation of a climate in which men and women, Christian men and women, decide freely, take initiatives, treat each other and the world with responsibility and rejoice in the variety of vocations and charisms.

The members of Schoenstatt work in great numbers in educational projects, healthcare, missionary activities, culture and politics, and especially collaborate with other religious communities and initiatives of the Church.