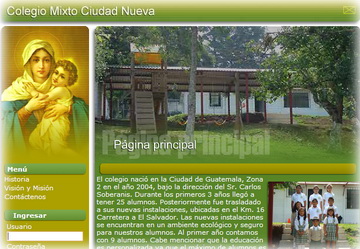 The school emerged in Guatemala City, zone 2, in 2004, under the direction of Mr. CarlosSoberanis.  During the first three years, there were as many as twenty-five students.  Later it transferred to its new campus, located on Km. 16, on the highway to El Salvador.  The new campus is located in an ecological environment, and the students are safe there.  It is important to mention that they have a personalized curriculum and the maximum number of students per grade is ten.  Mayra de Vallendor, a coordinator for the Pilgrim MTA and daughter-in-law to Mr. and Mrs. Vallendor from Argentina – members of the Schoenstatt founding generation, had the idea of offering the community a new educational alternative based on the pedagogy of Father Joseph Kentenich, and on her experience as a teacher in other educational institutions in Guatemala.

The education center came forth with the idea of fostering values and convictions in Guatemalan youths, projecting the school as a recognized institution for forming youths with a broad vision of life capable of achieving their objectives.  It seeks to favor the student with an academic formation that allows him to develop his capacity, ability and skills with moral and civic values in an ecological environment. 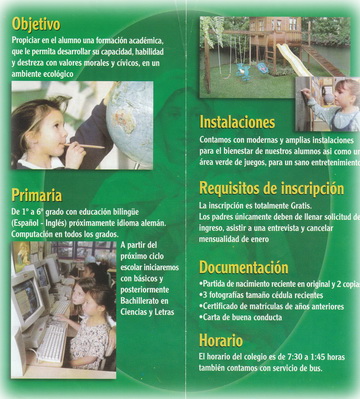 With an awareness that it is a developing country, it needs people who are capable and prepared with all the tools necessary that a formal education can offer.  We are an educational institution, educating and preparing children and youths for the future, so they may have civic knowledge and awareness of the environment in which they are growing.  It is hoped that this will allow them to change the social context, politics, economy and environment of Guatemala, seeking a better future knowing the history and analyzing the causes of present problems.

“We form students in a system of personalized education whose educational activity is centered on the cultivation of human and Christian virtues; a high academic level with the mastering of a foreign language (English), through the development of innovative projects.  We prepare the student to be capable of forming and fulfilling a personal life project which is coherent and competitive.”