Schoenstatt, a popular Movement of Pilgrims 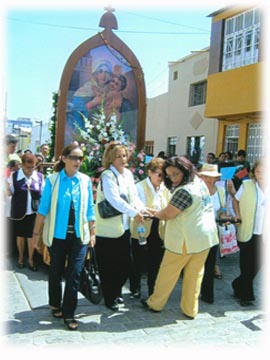 This also had its demands, that is: the serious effort to strive for one’s holiness. During its first phase of history, during the years of the First World War (1914-1918), Schoenstatt developed from a Marian Congregation that was founded on April 19, 1914. That was the time of Joseph Engling, the sodalist, who lived a heroic life during his years as a soldier. This was the time of the “sodalists heroes”. The ideals of the Marian Congregation spread among the soldiers, on the battlefields and the different fronts.

After the conflict and during the conference that was carried out in Horde (1919), the Apsotolic Federation was founded; its objective was the “apostolic education of Catholic leaders, in the spirit of the Church.” In 1920 the first women were admitted into the Schoenstatt Movement, and from these beginnings, the Community of the Schoenstatt Sisters of Mary was founded in 1926. During the first twenty years of its development (1914-1934) Schoenstatt was a marked movement of Catholic leaders at the service of the organization of the masses that existed at that time in Germany.

But at the end of 1933, Father Kentenich promoted a fundamental change of strategy. In a letter written on December 21, 1933, he urged the Movement from then on to also convert itself into a movement of the people: “We should step from a movement of leaders to a movement of the people, without neglecting the training and organization of the leaders.” What was the reason for the change? Father Kentenich perceived the voice of God through the new circumstances in Germany. In 1933 Adolph Hitler had taken over power and he began to mobilize the German people with great impetus by seeking their incorporation into the National Socialist Movement. He even tried to form a new religion. It was necessary to give a concrete response. “Now we should mobilize all available forces.”

This is where his idea – strength for 1934 – came from: a Year of Schoenstatt, Marian, and of people. Let us analyze some of the tasks that Father Kentenich pointed out to the Movement a little more closely. It was about bringing people to a believing, spiritual contact with the Shrine. At the same time, before the situation in which the state held all the power, he wanted to change the fundamental values of the German people. Everything possible had to be done so that the people would “feel at home” in the world of Schoenstatt values. In order to do this, the great ideas -strength or ideals of Schoenstatt had to become popular and spread to the people.

It is about a concrete believing and spiritual contact.

The presence of the Virgin Mary in the Shrine is an invaluable gift. She, as Mother, wants to be close to her children. At the same time, every gift implies a task. It is up to us to give testimony of this maternal presence, and to help, so that many can have an encounter here with the Virgin Mary. “That all those who come here to pray shall experience the glory of Mary,” Father Kentenich said on October 18, 1914.

It is about a concrete believing and spiritual contact. Many times it will not be possible to physically go to the Shrine. But it is always possible to go on a spiritual pilgrimage. If we do this, we will receive the same graces that we would have obtained by being present. To clarify this even more: It does little to be in the Shrine, if faith is weak. We will leave with empty hands. On the contrary, no one can measure the graces that we can receive if we go empty, open, and confident. “He has filled the hungry with good things”. (Lk. 1:53)

But this is not enough. A stream should come out of the Shrine, a great wave of graces, of life and of ideas that will reach the people. In the first place, we should make the person of Mary known. Not only as the powerful “Mother of the people”, rather as the great model or the great, living, mold of the catechism of which is a “profound Christian life.” (Father Kentenich, 12, 21, 1933).

During Father Kentenich’s trips to the continent of Latin America, he discovered that the Latin American people possess a natural openness to the person of the Virgin Mary. Gifts are tasks. Through the Schoenstatt Rosary Campaign, Schoenstatt became popular in Latin America, which obviously was already the desire in 1933.

His Holiness John Paul II said that the Virgin Mary belongs to the “identity of our people and it characterizes the devotion of the people.” (Zapopan, 1, 31, 1979). It is necessary to show the true image of Mary in a profound, simple way. In addition, it is also important to portray her as a real person, and to share the response that she offers to the problems of our time.

Simultaneously, we should make the great ideas-strength that the Schoenstatt Movement stresses popular and spread it. Such excellent examples are: the importance of the father in the family and in the entire social structure, the face of God as a merciful Father, the sanctity of the workday, and the image of man as a son of God- his dignity and personal value, the vision of human society as a great family, the reality of the mystery of Christ- in his dimension of the Cross as well as his resurrected condition, and the vision of a victorious future….

In this chapter, we have reflected on an essential dimension of the Schoenstatt Movement. It is worthwhile to conclude it with a quote from the text of the Puebla Document: “the religion of the people has the ability to gather multitudes. For this reason, in the realm of devotion of the people, the Church fulfills its imperative of universality. In effect, we know that the message is not reserved to a small group of initiators, of the privileged, or the chosen ones, rather it is destined for everyone (In 57), the Church accomplishes this ample gathering of the masses in its shrines and religious celebrations. This is where the evangelical message has the opportunity, which is not always taken pastorally, to reach the heart of the masses.” (Ibid) (DP 449).