The world pilgrimage of the Father Symbol 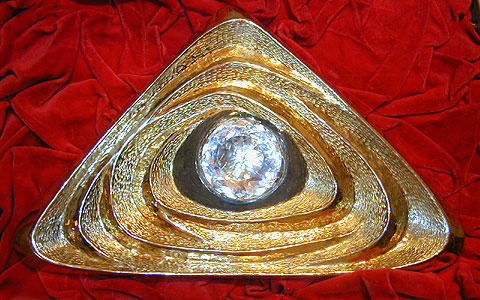 “The General Presidium joyfully accepts the desire from Conference 2014 that the Father Eye Symbol which our Father and Founder gave to the Original Shrine begins a world-wide pilgrimage. On July 8, 2009 (the 99th anniversary of the ordination to the priesthood of Father Kentenich), at the celebration of the Eucharist at 9:00 A.M. in the Original Shrine, it will be sent out to visit all national Schoenstatt Families. With this symbol which reminds us of the loving care and direction of God the Father, all are invited to the 2014 Jubilee in the Original Shrine…..” With these words, at the beginning of May, Father Heinrich Walter invited the entire Schoenstatt Family to join in the beginning of a pilgrimage which will conclude on October 18, 2014.

On October 15, 1967, Father Kentenich gave this Symbol of the Father – a symbol of the loving care and direction of God the Father – to the Schoenstatt Family of the Diocese of Treveris in representation of the entire Family, for safe-keeping. Only one year later, unexpectedly, the Symbol of the Father began an unforeseen world-wide pilgrimage with the death of Father Kentenich. It went on pilgrimage to the countries which had for so long awaited the personal visit of Father Kentenich after the long years of separation due to the exile which had been imposed on him by the Church. After several years of pilgrimage, it returned to Schoenstatt where it remained as a precious legacy in the safe-keeping of Father Heinz Künster, a priest of the Federation.

In February 2009, Conference 2014 suggested “that shortly the pilgrimage of the Father Symbol which was a gift of the Founder, begins its pilgrimage throughout the world. We wish that with its presence, our Family purifies itself and grows in unity to strengthen us in our mission at the service of the Church and society.”

At the beginning of May, Father José María García and Sister M. Luciane Machens (in charge of the pilgrimage of the Father Eye Symbol), wrote to the Directors of the Movement throughout the world, inviting all countries to petition for the visit of the Father Symbol. In summary, 33 countries were represented at Conference 2014 and there are more countries where Schoenstatt is present which means that the Symbol can be in each country for shortly less than two months.

The countries which want to sign up can write to [email protected] and ask for a date or to see which dates might be available for the visit of the Symbol in their countries.

With the world-wide pilgrimage of the Father Eye Symbol, the count-down to October 18, 2014 has definitely begun.

“May this Symbol help that Divine Direction motivate us to be in vital contact among us,” says Fr. Heinrich Walter, “and may a life current come forth which we may introduce into the Church in the Jubilee Year.”

Photos of July 8, 2009 – The Father Symbol sent forth to its World Pilgrimage