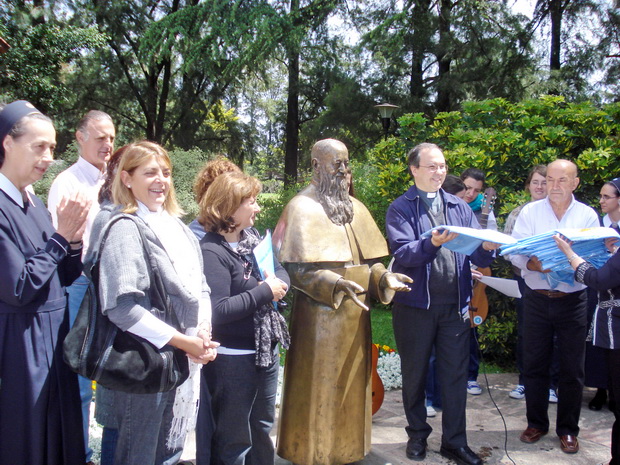 The Schoenstatt Family in Argentina decided to offer the Church an active commitment to the country as true citizens and to spread the Bicentenary Pact as citizens who love their country and are committed to it. They decided to do this by forming a chain of crowning Mary as the “Mother and Queen of a nation for all,” a celebration that will take place in many parts of the country simultaneously on 8 May 2010. We recall that in the most difficult moments of his life and his country, Schoenstatt’s founder, Fr. Joseph Kentenich, crowned Mary so that she would reveal herself.

What is the Bicentenary Pact? In actual fact, this agreement should not be necessary because these are standards we all follow. However, in a society that has lost its values to such an extent as Argentina, it becomes necessary to make people aware of many things that seem normal and correct because they’ve become daily habits. “As Schoenstatters, as the Family of the Father, we have a duty to do these things loyally and to make them known by educating our families and those around us. In this way, we will be able contribute our grains of sand to the construction of a new country, with other values and with committed citizens who are more than mere inhabitants of this beautiful Argentina,” they explain.

It is the Ten Commandments of civic values that are necessary in order to knit the social fabric of each notion – from saying ‘no’ to bribes to making a commitment to keep public spaces, roads, squares and parish churches clean. Can we change a country by picking litter up from the ground? Yes, we can. Sociological studies show that crime rates in New York decreased dramatically when a joint effort was made to clean the squares, roads and metro stations. And when an entire Movement is present in each of the country’s dioceses and everyone according to the pact, makes the commitment to “carry out social actions of solidarity by giving money and/or their time, participating in rallies for the biggest victims in great calamities and praying a daily Our Father, Hail Mary and Glory Be for our leaders,” then it’s possible to change an entire country.

The Bicentenary Pact is spreading in the Movements and in many parishes.

Text of the Bicentenary Pact