Ministry of Hope, Paraguay – Reaching out to Divorced couples in new relationship 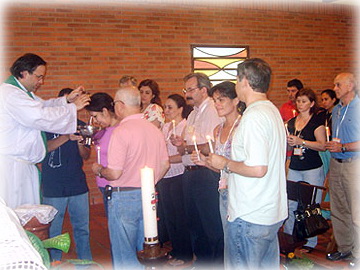 Ministry of Hope, a Christian project for life is the initiative of the Family Work in Paraguay. It wants to be a response from the Church to welcome and retain the couples in which one or both have partners has separated (or divorced) and has formed a new relationship. It is a ministry for the Church as Mother and Teacher to fulfill its mission of leading all baptized persons to salvation and can help them find their place within the Church. Later they will be able to offer service in one of its areas.

The objective is to welcome them truthfully, with respect, and warmth…..to accompany them with hope to overcome the difficult impact of a separation or divorce and to assume the challenge to build solidly the basis for a new life. Schoenstatt wants to show them how to continue being children of God (as they were before the separation or divorce) and to have the attitude of children who know they are loved. This will help them to experience a healthy forgiveness and will open unheard of ways to spiritual growth. 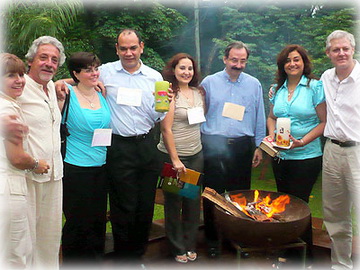 Toward the end of 2005, Víctor and Stella Domínguez from the Schoenstatt Family Work in Paraguay (then Executive Secretaries of the Paraguayan Episcopal Conference) attended a CELAM Conference in Cochabanba, Bolivia where each country contributed something on the topic of irregular families. With the hand on the pulse of time and the ear at the heart of God, they asked themselves if Schoenstatt is for everyone…..do we not also have to do something (based on the richness of our spirituality) for these children of God who find themselves in this situation? They later shared their concern with the Movement.

At the same time, Karen and Bernardino Portillo (former members of both the Boys’ and Girls’ Youth who were single at the time) presented themselves to Fr. Antonio Cosp in Tuparendá, Ypacaraí on Sunday, November 20, 2005. The Portillos now separated/divorced, living in a new relationship and are now interested in taking forward an apostolate for couples who are in the same situation. They were contacted by Otilia and Federico Acosta, members of the Family Branch.

Later, there was an interview in the Youth Shrine with Fr. Antonio Cosp on Friday, November 25, 2005. Karen and Bernardino Portillo presented the idea to Fr. Antonio who seemed interested and proposed presenting the topic to the leaders of the Movment.

Following was an interview at the Youth Shrine with Fr. Antonio Cosp on Tuesday, November 29, 2005. Participating were: Fr. Antonio Cosp, Magdi Cosp, Lourdes Ortiz, Ada Centurión, Sonia and Eduardo Morales, and Karen and Bernardino Portillo. The foundation for the structure of Ministry of Hope, a service for separated/divorced persons in a new relationship, was established at this meeting.

Presentation of the project

On May 2, 2006, the project was presented to the Family Work and the Board of Advisers (Sr. Edna and Fr. Antonio), the Mothers’ Branch of the Movement (Sr. M. Marta), and to the leaders of the Family Branch (Margarita and Alcides González). At this meeting, the leaders and advisers approved the basic document of the project presented which is the Founding Document and is also the basis for future invitations to parishes, Movements, etc. At least once a year, the team should review this document to renew the objectives, ideals, activities, and renew the dreams, etc. At this meeting, the leaders of the branch promised the important economic support of the Family Branch for the costs which this ministry will require for its implementation. In addition to those mentioned, participating in this meeting were the Ortiz and Domíguez families who are already functioning as coordinators of Ministry of Hope.

Tuesday, May 30, 2006, marked the beginning of the activities of Ministry of Hope in the Youth Shrine.

On January 2, 2007, an important meeting in the Archdiocesan Family Ministry Office took place. Participating were: Fr. Antonio Cosp, Stella and Víctor Domínguez, Sonia and Eduardo Morales. The coordinators of the Archdiocesan Family Ministry Office (Rosa and Tomás Cáceres, Elodia and Felix Alfonso) were informed that the Schoenstatt Movement has started Ministry of Hope, a service for persons who are separated/divorced and in a new relationship. The idea was approved and it was asked that this new ministry be taken to the parishes; nevertheless, with the recent beginning and the lack of means for its undertaking, the coordinators for Ministry of Hope ask that those interested in taking the project to the parishes help with the cycle of talks open in the Movement. The coordinators asked the Archdiocesan Family Ministry Office to be in charge of the invitations through the deaneries and spreading these activities through posters, etc. Subsequently they will assign representatives to attend the meeting of the coordinators for Ministry of Hope so they can learn the methodology and topics which are focused in these talks. 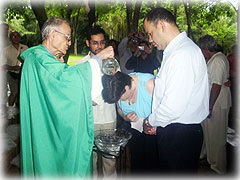 The Schoenstatt Movement wants to show these brothers and sisters the ways to live united with Christ, living their Christian commitment within the Church…..assuming they have rights and obligations and participating in the activities and means of salvation which the Church offers us or reincorporating them into the bosom of the Church if they have left.

The meetings (talks) take place on the first Tuesday of each month in the Youth Shrine. The topics which are developed are related with self-knowledge…..of the couple…..mutual relationship with each other and with the children…..knowledge of the Movement…..some of Father Kentenich’s pedagogy.

In addition, they are offered the possibility to participate in an annual retreat as a couple for a profound encounter with God both personally and as a couple. This also gives them the opportunity to share with other couples who are in the same situation. They can also share their life experiences by means of workshops and other activities.

They participate in some activities which are organized in the Movement like: guardians of the Shrine, 18th of October celebration, and vocation circle among other pastoral activities.

Four couples (pioneers of Ministry of Hope) who by their own initiative form a group named “Tembiaporá” – mission underway – prepared themselves by the team Alianza del Movimiento (Covenant of the Movement) to seal their Covenant of Love with the Blessed Mother and this took place in November of 2008. To seal the Covenant of Love with the Blessed Mother is to give ourselves to Her just as we are…..with our limitations, mistakes and imperfections…..so that She may use us as instruments. The group Luz en el Camino (Light on the Way) was formed in January of 2009. Eight couples are participating and a permanent deacon is also participating as an interested observer to learn the methodology in order to later apply it in his community.

At the present time, the leading team is composed of: Fr. Antonio Cosp (spiritual adviser), Lourdes and Alberto Bogarín Ayala (coordinators), Víctor and Stella Domínguez Ayala, Carolina and Alejandro Duarte (lay advisers), Karen and Bernardino Portillo (executive secretaries) and Martina and Rolf Huber (collaborators). There are other couples who work closely with the ministry.

At the present, there are three groups in formation of separated/divorced persons in a new relationship. They are a result of the fruitfulness of the open talks and annual retreats which have taken place. Likewise, in the city of Encarnación, the coordinating team has been formed to fulfill the initial tasks in order to offer this service to those interested in this city. It is also foreseen that in this year, a coordinating team will be formed in Ciudad del Este with the aim of extending this apostolate to this location.

We would like to invite all of these couples who find themselves in this situation so they may come and participate in these meetings. May these brothers and sisters experience the joy of feeling wanted and loved by a Father who is so loving, of infinite goodness and mercy and whose mystery is infinite and unexplainable.

Among other things, Ministry of Hope intends: