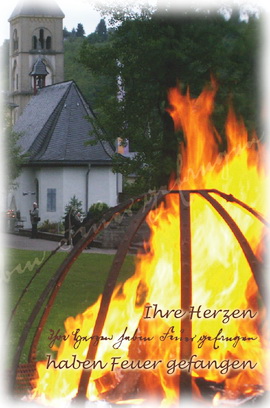 In depth, christianity means to follow someone. It is no first embracing an idea. This is a consequence and comes later. The first that the apostles discovered was the person of Jesus. And this Jesus caught them and changed their lives.

God comes to man through man. In this case, the initial principle was the Son of Man. God continues to follow this incarnational principle through the history of the Church. The great saints attracted and created other great saints. This is the case with Frances of Asis and Claire, or with Don Bosco and Domingo Savio, or with St. Ignatius and St. Frances Xaverius. St. Ignatius shared that he worked a full year to conquer Frances Xaverius whi was studying in Paris. As good Basque, he was stubborn, but once conquered, he caught his heart and soul and knew – with this man I will conquer a whole continent. And he was right: Frances Xaverius conquered India. But what hat Frances Xaverius been withour Ignatius? And Ignatius without Frances Xaverius? Both were used together as instruments in the hands of God to fulfill a great work of evangelization.

Their lives tell the Founder’s story

The spiritual sons and daughters of Father Kentenich, modeled by him and matured to an outstanding Christian life, are to be witnesses of their spiritual father. The lives of persons who in an model way have lived to the ideals of Schoenstatt’s spirituality tell the story of Schoenstatt, and tell the story of the one whom they owe the guidance to this ideal and the tools to achieve the goal: next to God and the Blessed Mother, the founder of Schoenstatt. The jewels in Schoenstatt’s collection are to highlight the master jewel.

With the Schoenstatt persons already beatified or with their processes in progress the Founder and his charisma begins to “shine”; his concept of a new community of free, firm and apostolic persons gets a face, a history through them.


The lives of Karl Leisner, the first Schoenstatt member beatified, and the six Schoenstatt members “on the way to beatification” – Sr. Emilie, João Pozzobon, Mario Hiriart, Gertraud von Bullion, Joseph Engling, Franz Reinisch – , and of many other “jewels of Schoenstatt” whose life have made a difference to Schoenstatt branches, countries, groups, tell the story of the Covenant of Love that is able to transform a person totally, however also tell the story of individual persons who with their mission, background, mentality strengths and weaknesses have marked the destiny of Schoenstatt.