The Unity Cross in Schoenstatt

“Standing by the cross of Jesus was his mother,” says John the Evangelist.  The symbolic representation that the author, Father Ángel Vicente Cerró took of an old picture of the German abbey of Maria Laach –  shows her close to her crucified son, gathering the blood from his side in a chalice.  In Father Kentenich’s words, “She is ‘the permanent Helpmate and Companion in his mission to redeem mankind’ ”. (Fr. Benjamin Pereira, The Unity Cross Comes to the Original Shrine, p.7) 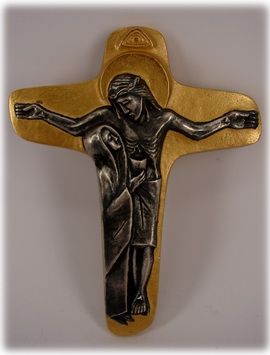 The Unity Cross has become one of the most characteristic symbols of the Schoenstatt Movement.  Three symbols can be seen on it:  the image of Christ, the image of Mary and the Father Symbol.  The Unity Cross expresses the bi-unity that Schoenstatt wants to proclaim:  Christ is inseparable from Mary and Mary is inseparable from Christ.  The Father Symbol at the cusp of the cross illuminates everything:  Christ and Mary rest in the Father, in the cross that the Father has determined in his plan of love, as the way of redemption.  Moreover, Christ and Mary have a unique posture:  they are alive and they are mutually looking at one another in a profound dialogue of Mother and Son.  The blood that Mary gathers with his chalice emanates from Christ’s side.  The fact that they are alive is not only symbolic; rather, it further makes a truth of faith evident:  On the cross, Christ and Mary, as well as in reality, are presently alive in a glorious body.

The Unity Cross is the image itself of the ‘Christ of attachments’, whose most profound desire is that “all may be one,” as He and the Father are one.  It shows Christ, the Son, deeply and intimately attached to Mary his Mother, permanent Helpmate and Companion in his mission to redeem mankind.  It is the Christ of Unity, in the strength of his sacrifice and giving of self, extending his arms widely, uniting heaven with earth and earth with heaven.

Why was the “Unity Cross” designed?

This cross was conceived as a symbol of the first generation of Chilean priests, who studied in Brazil and Switzerland.  Between 1958 and 1959, when the first Pallottine seminarians were about to be ordained as priests, they wanted to give something to the Shrine of Bellavista, which had given birth to and nurtured their faith, a cross that would express the image of the “priestly Christ.”  This is how the idea emerged to represent Christ in the “Christ of Attachments”, that is the power of the Holy Spirit which is profoundly and intimately attached to the Father as a Son, and also to Mary, his Mother as permanent Helpmate and Companion in his mission to redeem mankind.  It is the “Christ of Unity” who unites heaven and earth; it is “Christ, the Good Shepherd” who, reflecting the Father’s love unites man with God and man with fellowman making them sons and daughters of the same Father. (Fr. Benjamin Pereira, The Unity Cross Comes to the Original Shrine, p.7). The original cross is a Trinitarian Cross: as well as the symbols of the Father and the Son, the background is red, symbolizing the Holy Spirit.

On the back of the cross there are three phrases in Latin that express ideals and reality:

“Unum in sanguine”:  One in the blood (of Christ)

“Tua res agitur”:  It is your redeeming task.

“Clarifica te”: Glorify yourself (in our smallness and helplessness) (Ibid)

The first image is installed

The Unity Cross was born at a time of great tensions in Bellavista, when mistrust and mis- understanding reigned among the members of the Movement. Father Humberto Anwandter placed the original Unity Cross in the Shrine of Bellavista on Christmas of 1960.  This event was called the “Miracle of Unity”, beginning a new period of unity in the Schoenstatt Family in Chile, after a time that had been marked by difficulties in the internal relationships.

On November 16, 1965, when Father celebrated his 80th birthday in Rome, the children from Bellavista gave him the original Cross as a present, with the desire that it would be returned to the Chilean Shrine.  Father Kentenich already knew it because a wooden replica had accompanied him for almost five years in Milwaukee.  When he received the “original” one and the intention was manifested, he asked:  “Is it a present or not?”, and when an affirmative response was given, he said:  “A present is a present,” and he in turn gave it to the Province of the Institute of Our Lady of Schoenstatt in Stuttgart, Germany.

The Unity Cross for the Original Shrine arrived as a gift from the international Schoenstatt Family in 1997, during the “Year of Christ”, after it had traveled to the shrines on the five continents, gathering the life that flourished in them. 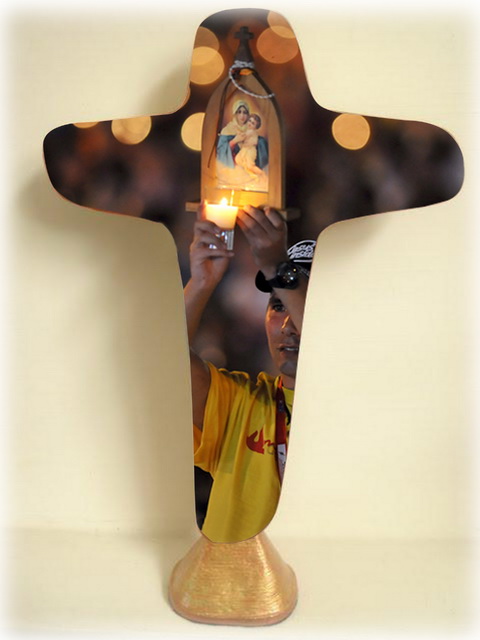 Without intending it, the Unity Cross spread throughout the entire Church.  The cross that began with a handful of priests became a cross for the entire Family and it was extended throughout the world.  In the Movement outside of Chile, it was first called the Cross from Chile.  It is found on the grounds and on the altar of many Schoenstatt shrines, in wayside shrines and in home shrines.

Later, because of the depth of its symbolism, Christ and Mary, it began to appear on the pectoral cross of cardinals, bishops, archbishops, priests and religious communities.  This was the case of Mother Teresa of Calcutta, who decided that her entire congregation would wear it.  In this way, many communities and many people in the entire world assumed it.

The Unity Cross is present in many circles of the Church as a great announcement of the image that Father Kentenich gave departing from the Covenant of Love with Mary.  For Schoenstatt, it is a constant call to the mission of taking Jesus and Mary, in covenant, to the world.

Along with the Pilgrim MTA, the Unity Cross, as a missionary cross, is the symbol of the Year of the Missionary Current in preparation of Jubilee 2014 and the jubilee itself.