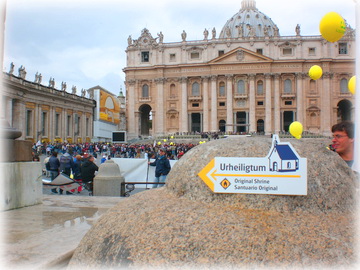 The Schoenstatt Movement is deeply attached to the Catholic Church. As a movement of renewal, its main task is to draw closer to the local and universal church, enriching it with its charism while simultaneously allowing itself to be fed by the Church. The International Schoenstatt Centre in Rome with the Matri Ecclesiae Shrine is a visible expression of this commitment to the Church.

This is why Schoenstatt is keen actively participate in the Universal Church’s activities and support them, such as the Year of St. Paul and the Year of the Priest, World Youth Day, or the Year of Faith. By working together strengths and charisms are united  to promote enriched growth.

For Schoenstatt members and groups it is important to work in conjunction with parishes, other communities, the laity, couples and the public sphere at all levels. Schoenstatt supports initiatives that already exist and in which it sees potential and also suggests new possibilities in the area of pastoral work.

In addition to its work within the Catholic Church, the Schoenstatt Movement is in close contact with other faiths and many new communities (such as “United for Europe” in Europe). Sometimes we work on joint projects that serve the church and the community.

Courses in spiritual direction and the formation for couples, making their commitment to pastoral work within the family possible, have been very well received. This year, work has been done to develop a pastoral course for the German-speaking countries.

Either personally or in groups, many people commit themselves to their parishes and dioceses via religious circles or sacramental catechesis. They participate or lead church programmes on radio and television. The family pastoral work and the support and care of immigrants are activities where Schoenstatt offers its experience and potential.

Whether spiritually or in the collection and sharing of material goods, priests, communities and international bodies support on another through their numerous international relations.

Searching for and finding God in life 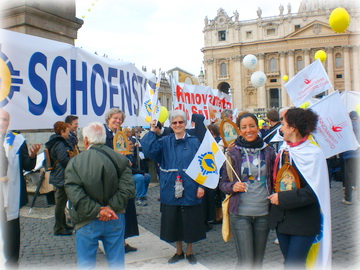 The spirituality, school of prayer and concrete forms of expression developed in Schoenstatt help modern man to unite their daily life with their faith. “The search for footsteps,” “the pitcher,” “the illuminated rosary” and the “1000 Hail Marys” are some examples of Schoenstatt’s charism which it uses to build the church from within and without.

Places of grace in the heart of the world

Schoenstatt extends the “geography of faith” (John Paul II). This means that it provides places where people can feel the presence of God. These places include the 200 shrines around the world which are exact replicas of the Mother Shrine in Schoenstatt, thousands of wayside shrines, chapels, prayer chapels and home shrines. The carefully organised pastoral works emerging from the Shrine create a space and atmosphere in which people can have religious experiences.

Pilgrimages around the 18th of October by workers, cyclists and youth to the shrines, transforming it into a modern pilgrim movement, generate deep experiences which lead to increased faith in community, which for many becomes an opportunity to experience God in a personal way.

The shrines celebrate feast days in the church and special seasons in the liturgical year with activities such as open retreats during Holy Week, “Ten minutes at the crib,” “the school of Mary” (for the children) and Corpus Christi processions all of which help to transmit religious experiences and are a form of evangelisation.

In the heart of the Church: The Pilgrim Mother Campaign 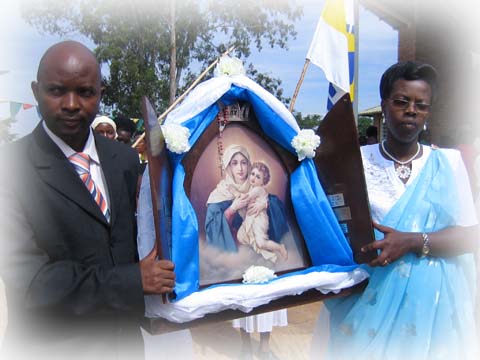 The Pilgrim Mother Campaign is a mission within the Church, a modern version of pastoral work, the specific aim of which is family evangelisation.

It is an apostolate that reaches out to everyone, promoting Christian values. The strength radiating from the Campaign is rooted in the Shrine as a source of grace and reaches out to people, rescuing them in their needs and worries.

It can touch everyone because it is so simple. It is bolstered by a solid spirituality and an efficient pedagogy that makes the proclamation of the New Evangelisation practical.

The aim of the Campaign is to cultivate close contact and collaboration with parishes so that the parish priest can count on an evangelising environment that draws in families, promotes sacramental life and helps the parish become a “community of communities and movements” (Holy Sunday Document, 58)

The parish priests’ openness – which in many cases is amazing – owes to the way it has conquered the laity, inspired by the example of João Pozzobon. He visualised the Campaign as Schoenstatt’s instrument in the service of the Church. “All of João Pozzobon’s work and his Campaign was geared towards the service of renewing the Church and society. (Santa Maria Document, 89, p9).

Being a Christian missionary, here and now: Missions 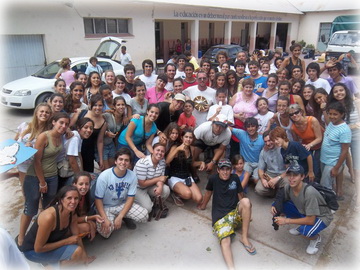 The missions, carried out by the Schoenstatt Youth, who go alone or are accompanied by families, form a concrete contribution that adds life to the Church.

To go on mission means visiting to an unknown community for an entire week, living in basic conditions, transmitting their own experiences of faith, living Schoenstatt’s spirituality intensively and allowing others to experience it too. To go on mission means expressing the things that have happened in my life which have touched me the most deeply. It means going from house to house like Mary, being prepared to listen, taking time to understand what motivates people, helping them to deepen or restore their self-esteem, showing them how God acts in their lives. To go on mission means speaking about God through people, helping in an active way regardless of the need, whether this is helping to build a house in a poor neighbourhood, supplying free medicines or shoulder the worries of both young and old. To go on mission is also a renewal through the testimonies of faith. The missions are structured in an individual way and according to the needs of each place, but the fundamental principle is always the same.