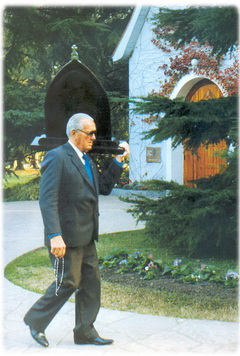 John Louis Pozzobon (1904 – 1985), a member of the Schoenstatt Apostolic Movement in Brazil, father of seven children, in 1950 was asked by a Sister of Mary to take a picture of the Mother Thrice Admirable of Schoenstatt to families so that they could pray the rosary together.

John Pozzobon assumed this task and for the following 35 years until his death made it his personal mission. He walked more than 87,000 miles with this image, taking the Blessed Mother to homes, hospitals, schools, and jails, inciting in all these places the attachment to her, and the prayer of the rosary.

This “Campaign” – as John Pozzobon liked to call it – had a humble beginning, like each work of God; since 1984, it spread across South America to Central America and North America as well as to countries in Europe, Asia, and Africa, altogether 85.

John lived his life to the unconditional YES of Mary. He lived a simple and humble life, dedicated completely to his family, to Schoenstatt and the Marian mission; the social commitment of the Campaign was essential to him. In faithfulness to Father Kentenich, whose “small student” he loved to call himself, he continued his mission also in times of being questioned and misinterpreted. Thanks to his faithfulness, hundreds thousands of families throughout the world receive the Pilgrim Mother, are united in prayer, discover Jesus in a deeper way, and are blessed by the graces of the Schoenstatt Shrine.

On the morning of June 27, 1985, deacon John Louis Pozzobon was run over by a truck, in midst of a thick fog, while heading towards the Shrine of Our Lady of Schoenstatt to attend to Mass, as he did each day, a few days after he had offered his life that the Campaign would become international.