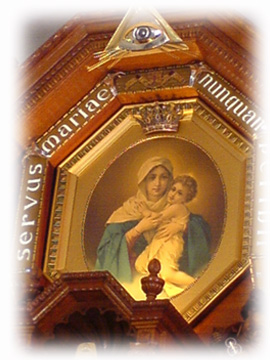 We are now going to explain the name of “this” Virgin. Let us begin with the end. The fact that it is a foreign name, in German – a difficult language for us Latinos – creates a problem right away. Sometimes there are questions as to whether it would not be possible to translate or to eventually change the name “Schoenstatt.” Such reactions are understandable, but the name cannot be changed. Why?

Because it expresses a concrete and fundamental attachment to the place where the Blessed Virgin has wanted to manifest herself. Every name also has its history. That is how it is with “this” Virgin whose official title is “Mother Thrice Admirable, Queen and Victress of Schoenstatt.”

How then did this come about?
We must go back to the foundation of Schoenstatt, to the time of the First World War. Through the Marian Sodality in Schoenstatt, the name of “Mother Thrice Admirable” was introduced since the sodality had been inspired by the famous Marian Sodality of Ingolstadt (where Mary was venerated under the title “Mater Ter Admirablilis,” Mother Thrice Admirable, preferred title of the holy inspirer, Father Rem, S.J.) During that time, among the young sodalists, a prayer composed by Father Kentenich circulated which began thus: “Mother Thrice Admirable, teach us to do battle as your warriors…..”

Later, the word “Queen” was added to the official name of the Virgin of Schoenstatt. It was during the time of struggle with national socialism. As it happened to all of the Catholic Movements and Institutions of Germany, Schoenstatt was persecuted by the nazi dictatorship. On a very human level, it was a very uneven battle. Father Kentenich compared it the struggle between David and the giant, Goliath. The Schoenstatt Family, gathering strength from within itself, became aware of the consecration, of the covenant of love which united them as a family to the Virgin Mary. From within its ranks, a crowning current arose not only in Schoenstatt but also later among the Schoenstatt prisoners in the concentration camp of Dachau. Here she was crowned “Queen of the concentration camp.” With this act of Marian piety, they wanted to acknowledge before Mary their human helplessness, and at the same time acknowledge the real power of the Blessed Virgin by expressing their total disposition at her service. Upon his return from the concentration camp, Father Kentenich solemnly renewed this crowning in Schoenstatt on October 18, 1946, proclaiming the Virgin Mary as “Queen of the world.”

The title of “Victress” is more recent and also comes forth in the history of the Schoenstatt Family. A few short years after the liberation from the concentration camp, Father Kentenich and Schoenstatt began to experience difficult trials. This time the difficulties were with the Church and resulted with the Founder’s exile of fourteen years (1951-1965, the majority of which took place in Milwaukee/USA from 1952-1965). The exile concluded with his rehabilitation in Rome during the fourth and last session of the Second Vatican Council with Pope Paul VI. They were very hard times for Schoenstatt. Humanly speaking, at times there were no glimmers of hope for a solution to the problems. Amid much darkness, Father Kentenich maintained an unperturbed confidence in the final victory of the Blessed Virgin. The events of 1965 (his going to Rome and his rehabilitation which culminated with his return to Schoenstatt on Christmas Eve of that year after an absence of 14 years) produced a decisive change in the situation. Acknowledging the specific action of the Virgin Mary in his liberation, Father Kentenich, during a crowning of the Blessed Virgin in Liebfrauenhohe (May 31, 1966) wanted that in the future “Victress” be added to the title of Mother Thrice Admirable and Queen of Schoenstatt.

Before concluding, an explanation is worthwhile. We began by explaining the official name of “this” Virgin. How to respond to the question: Why does the Virgin Mary have so many different titles? What does this mean? The answer is simple: It is not that there are different virgins even though we speak of the Virgin of Luján, the Virgin of Itatí, the Virgin of the Valley, the Virgin of Fátima, the Virgin of Lourdes, Mary Help of Christians…..or whichever other of the many advocations or existing titles. It is a matter of changing the preposition “from” to the preposition “of” in which case the question is cleared up. There is only one and the same Virgin Mary, Mother of God and Mother of mankind which has manifested herself – and continues to manifest – in different places: in Luján, in Itatí, in Lourdes, or as Mary Help of Christians. Upon speaking of the Virgin of Schoenstatt, we want to say the same: it is the Virgin Mary who has manifested herself in Schoenstatt.

We have explained the official title of Our Lady of Schoenstatt. This does not mean that it must be used formally every day. Each person also has his “official” name (it appears on your official documents) but normally, in daily life, more familiar or shorter names are used. That is why one hears in Schoenstatt “Blessed Mother”, MTA, Our Lady of Schoenstatt, or other names. All are valid possibilities.