Love for the Church 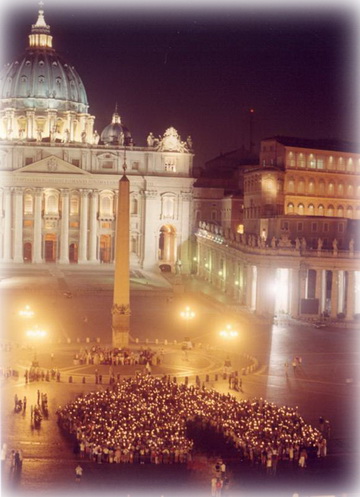 Concern for the renewal of the Christian message has always been central to Schoenstatt’s history. Father Kentenich’s two audiences with the Holy Fathers, Pio XII (1947) and Paul VI (1965) became opportunities to renew this commitment. In his audience with Pope Pio XII, shortly after the proclamation of the Encyclical “Provida Mater Ecclesia” on secular institutes, Fr. Kentenich promised his collaboration so that today, secular institutes hold the same importance for religious and moral renewal as did the religious orders of his day. In his second audience, immediately following the conclusion to the Second Vatican Council, the Schoenstatt Founder promised to concentrate all of his efforts in applying the letter and spirit of the Council.

Father Kentenich had an image to describe the aspirations of the Council: the Church “on new shores.”

This vision presupposes a form of Christianity based on individual choice,  l love and apostolic victory. Such Christianity has the ability to energise the least enthusiastic and most apathetic of people and uses leaders for whom religion is a vital, meaningful and active component:”There is an irreversible process that is inclined towards secularism and pluralism. The cogwheels of history will not turn back. It is senseless to transform life and action into a medieval situation. All retrogressive processes will be radically overcome by forward-looking tendencies; otherwise our efforts will disintegrate; our battle will be utopian and we will hand over present and future battlefields to enemy forces without a fight.”

This vision of the Church coincides with the wish of Pope John Paul II who highlighted the responsibility of the Church “in the newest of times,” that is, a Church that takes up the challenges of the 21st century.

The Church on “new shores” has specific characteristics:

It is a dynamic Church which is always in the process of internal conversion and renewal in its encounter with God and man. It is from there that its pilgrim and traveller conscience, expressed in the symbol of the boat, or the pilgrim rock that St. Paul speaks about (1 Cor. 10:4) emerges. In his December 1965 conference (the symbolic laying of the foundation stone at the Matri Ecclesiae Shrine in Rome), Father Kentenich said:

“In order to explain the thoughts we have summarised schematically at greater length, we recall that the Church has recently used other images to describe itself. We therefore happily return to the image of the boat: a boat that was tossed about by the waves on Lake Gennesaret, the boat in which the Lord appeared to be sleeping, as he appears to be doing today, a boat that does not fear the fury of the waters and bravely sails the uncertain seas of modern life. This once again gives us a dynamic view of the Church which expresses a strong desire for the whole world to be touched by it. It is a great risk to be a member of the Church today! It requires great audacity! It makes enormous demands! It requires enormous trust that the boat will not be shipwrecked by the storms, immense trust so as to accomplish its task. Clearly, it will be necessary to rescue as many of the shipwrecks as possible and bring them to shore. They will not be the ones to save other wavering and vacillating ships. In midst of the storm, the Church wants to reach out to all continents and all places in search of those called by God who desire a permanent place in this boat.”

The Church is a family consisting of the people of God where each discovers the value of brotherhood and its members are called to develop a sense of community:”A fraternal Church…what was the image of the Church in the past? A Church that was completely authoritarian. Yes, we can say this now without fear of contradiction – it was a dictatorial Church. And now…we know that John XXIII was considered to be the brother of all. He wanted to be brotherly so that the Church would also be brotherly…This puts an end to the Church’s dictatorial leadership. This has been replaced a focus on brotherhood and co-responsibility for one another and the need to work together for all of God’s people.”

“But we also express our objection to certain modern views that speak of ‘companionship and brotherhood.’ In light of such a concept, we seriously, firmly, clearly and decidedly believe that there can be no brotherhood without fatherhood.”

A Church guided by the Holy Spirit, the source of our trust and our hopes.

Stability and security cannot be found among men, rules or structures, only in the strength, activity, life and guidance of the Holy Spirit. The Church therefore heeds the words of the Apostle Paul: “Do not put out the Spirit’s fire; do not treat prophecies with contempt. Test everything and hold on to the good” (1 Thess. 5:19).

“A Church ruled by the Holy Spirit, that is, a Church that does not rely on the State or laws capable of offering security …The Holy Spirit which governs everything is at the centre of the Church. These place high demands on us. We should educate ourselves so that we are able to accomplish them. When the foundation rooted in the three theological virtues have been perfected by the gifts of the Holy Spirit, then the individual receives a special kind of security. We have called this kind of security “pendulum security” because it comes from above and not from below. This security shelters us in the heart of God and his love.”

It is a poor and humble Church that acknowledges its human limitations and even asks forgiveness for its faults. The consequence of such an experience is an attitude of service, humble and modest witness.

The Council has told us that the Church should, more and more each day, become a poor Church; a Church that goes out in search of poverty for itself, a Church that each DAY increasingly distances itself from grandeur and instead, becomes the friend of the poor and does not constantly ask and beg for the good-will of the State.

“A humble Church… that confesses its own faults and has the courage to ask for forgiveness.”

This Church wants to become the soul of the world and create a new human culture that is humane, dignified and liberating. Without interfering in party politics, its spirit influences all human areas like yeast affects the dough. An ancient Church writer used to say that “what the soul is to the body, Christians should be to the world.”

The Church should be, as it was in ancient Christendom, as it always should have been, the soul of culture and present in every corner of today’s world. Divisions between the Church and culture and the Church and the world should be overcome. The Church should reach out to all aspects of present-day culture which has become so confused and routine; of its personality that has been so deeply influenced by the actions of the devil…Go out to the whole world! What does this mean? It means activity in the broadest sense. Do not seek refuge the world, nor become caught up in the world or its worldliness. It is not possible to overcome the world without the penetrating influence of the Church in the world. The Church should work for greater understanding until it becomes the soul of the world.”

The Church’s actions should not be merely theoretical, but must also be put into praxis. This action is found in the proclamation of the message and characterises apostolic activity. Schoenstatt will often be misunderstood and rejected for upholding these goals. It will not refrain from living and proclaiming the truth, even at the cost of having its fidelity, obedience and love for the Church tested, as did its Founder. It is not always easy to fulfil Father Kentenich’s hopes for all those who are called to build the Church on new shores and which he wanted to see take root in all of his children:

“The Church needs prophetic leaders who, in their teaching and living, preserve that which holds important value beyond its times without taking shortcuts and these in turn, are flexible and receptive in order to creatively fill these new shores with the original spirit of Catholicism and be responsible for preparing the Church of the future and grant it solidity.”