A Shrine with a Movement – A Place of Pilgrimage 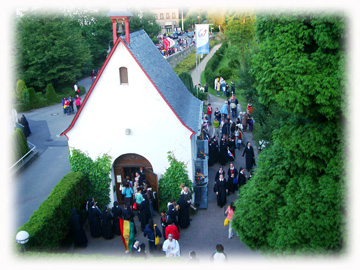 “You gather what I am aiming at: I would like to make this place a place of pilgrimage, a place of grace for our house and for the whole German province, and perhaps even further afield…..” This was the bold plan which Father Joseph Kentenich, Spiritual Director of the Minor Seminary of the Pallottine Fathers, proposed to his young students on that 18th of October of 1914, in the Schoenstatt Valley in Germany.

He was inviting them to work with the aim of transforming the old Chapel of St. Michael into a Marian Shrine (“this sanctuary which has stood more or less neglected, desolate and bare for as long as we can remember, has been – because of us and at our instigation – restored and given to the Mother of God.”) It had been two months since the great European war which would become the First World War had exploded.

Since that October day, more than nine decades have transpired. Father Kentenich died on September 15, 1968, but his words from that time have become a reality. The prophet was right. Or better still, the prophet detected God’s plan for that place. He discovered a source of grace – at that time there was a mere trickle of water – which today has become a powerful current of graces, of life and ideas reaching many countries and all continents.

The word Schoenstatt is pronounced in Paraguay, Australia, the USA, the Caribbean, South Africa, and India…

That little chapel dedicated to St. Michael the Archangel is actually the “original” Shrine which has multiplied itself in Germany, Europe and the world through a web of more than 200 “daughter” Shrines. It was officially recognized by the Church as a Shrine in 1947.

Schoenstatt, a place of pilgrimage.

Many people asked themselves if the Virgin had appeared as usually happens in other holy places, for example, Lourdes or Fatima. No, in Schoenstatt there was no apparition of the Mother of God. But she has certainly manifested herself from this small place. There, she has taken a divine initiative through a priestly instrument, Father Kentenich. “All those who come here to pray – he said in the talk on October 18, 1914 – shall experience the glory of Mary.” There, where the Virgin Mary makes herself present, there, life comes forth. There, where she is, we find peace.

There, where she has established herself, she gives her treasures in abundance, her graces. She always favors mankind, her children, and as all good mothers, she does it in such a way that she is especially concerned for those who suffer the most, those who are in greatest need, those who are the weakest. That is how a mother works, that is how Mary works.

Schoenstatt, a place of pilgrimage for today.

There are many and varied Marian Shrines throughout the world. Many are the graces which Mary dispenses from each place. Why would she have also wanted to manifest herself in Schoenstatt? To answer this question, what better than to turn to the witness of her main instrument, Father Kentenich and to the history which resulted from the foundation.

With a keen perception of the problems of his age and with a deep intuition of the future, Father Kentenich perceived that we were facing a radical change in the world. And, in the center of the problem, he saw mankind. He could see a growing massman process. He could perceive the danger of the uprooting of personal and traditional values. He could perceive the growing phenomenon of atheism which was already developing. He understood that the new times required a new type of man. The Virgin Mary should be his Mother and anew give birth to Christ in the hearts of mankind. In Schoenstatt and from Schoenstatt , she wanted to especially show herself as Educatrix of that “new man” and of that “new community.”

We should also question the history, question what occurred since that 18th of October of 1914. The facts speak an eloquent language. Thousands of persons have found a spiritual home in Schoenstatt. There, they have received special graces.

From that small chapel in the valley, a strong movement of spiritual renewal has come forth, a great religious current which increases and increases according to the measure in which it advances. It is seeking the “new shores” of the future. It is a movement which seeks the transformation of men into Christ through a Covenant of Love with Mary. It is a current of heroic surrender and sanctity (this was one of the demands of the original plan: “Accelerate the development of our own sanctification and in this way transform our Chapel into a place of pilgrimage.”) Six Secular Institutes have arisen, communities of Catholic leaders, contemplative communities, a vast lay movement, a movement of the people and of pilgrims.

Where the Virgin Mary is, there the Lord is present and there the Spirit is active. We will never be able to understand or to fully value the marvelous works of the Lord. Sufficient is it to perceive His nearness in order to experience a profound awe and to feel gratitude arising in us. That is how Father Kentenich expressed it prayerfully.

Thank you, Father, for choosing Schoenstatt as the place of God’s rebirth and the place where you radiate into the world the glories of our Mother, so that streams of love may pour forth to warm cold hearts.

If you want to understand something in depth, you should ask about its roots. If we want to grasp what Schoenstatt is, we have to investigate the founding act from which it has developed.

This takes us to a place – Schoenstatt – in the valley of Vallendar (Germany) and to a date, October 18, 1914. On that day in the old chapel of St. Michael which had been recently restored, Father Kentenich sealed a Covenant of Love with the Blessed Virgin. The talk he gave on that occasion to the young seminarians was acknowledged by him, many years later, as the founding document of the Schoenstatt Movement. His testimony is decisive.

Upon comparing the history of the Schoenstatt Shrine with other places where the Virgin Mary has also manifested herself, we confirm likenesses and differences. Something common to all: God always seeks human instruments through which he comes close to mankind. In October of 1914, the Mother of God takes a new initiative in Schoenstatt, Germany and now the human instrument is a young 29 year old priest, Father Joseph Kentenich. Up to here are the likenesses.

On that 18th of October, Father Kentenich tells his listeners of “a secret and favorite idea,” a “bold thought,” something he had been chewing on for quite some time. Would it then not be possible for our little sodality chapel to likewise become for us the Tabor on which the glory of Mary would be revealed? Three months earlier, on the 18th of July, he had received an article written by Father Cipriano Frolich telling the story of the Shrine of Pompei (Italy). It had come forth, not as in other places by an apparition of the Virgin Mary. God chose a human instrument there to fulfill his plans: a lawyer, Bartolo Longo (recently beatified by His Holiness John Paul II). The parallel was convincing.

What had taken place in Pompei, could it not also take place in Schoenstatt? His proposal was truly daring. But – he told the young seminarians – “How often in world history have not small and insignificant beginnings been the source of great and greater accomplishments! Why could that not also hold true in our case?”

The history of Schoenstatt since that day – a day like any other, but at the same time, a different day – proves that those desires became facts.

The little Schoenstatt Shrine has multiplied itself throughout the world through the “daughter” Shrines (the first was erected in Nueva Helvecia, Uruguay). The presence of Mary and the manifestation of her glories has multiplied through the numerous Home Shrines in the families. In all of these places, Mary wants to manifest herself as Mother and Educatrix, working great things. But in all she also demands, according to permanent laws of salvation history, human cooperation. It is thus expressed in the motto: “Mother, nothing without you, nothing without us.”