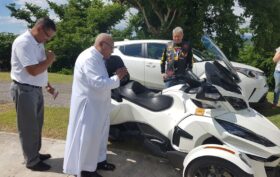 PUERTO RICO, Edgardo L. Rivera and Juan González • “If two or three of you on earth agree on any matter, whatever you ask, it will be granted to you by my Father in heaven.” (Mt 18,19) This was the spirit with which Catholic motorbike riders in Puerto Rico visited three Schoenstatt shrines to pray to our Blessed Mother Mary for the health of our sick brothers  and sisters. — Under the heading: “Three Shrines, One Prayer” the Catholic motorbike riders, the Lobos Riders, L.A.M.A. (Sections Arecibo, Cabo Rojo, LaresRead More 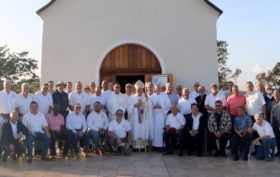 PUERTO RICO, Luis Enrique Ojeda • The Madrugadores de Maria (Dawn-breakers of Mary) is a current of life that emerged in Rancagua, Chile on May 28, 1989. It’s a men`s movement that has grown throughout Chile and fifteen countries internationally. Puerto Rico has eight groups, ours being, Cabo Rojo, the second to be formed, which on February 19th, celebrated its tenth anniversary.— A modest initiative As Madrugadores, we experience a torrent of graces in response to a very modest initiative, getting up early to pray in the Shrine. This simpleRead More