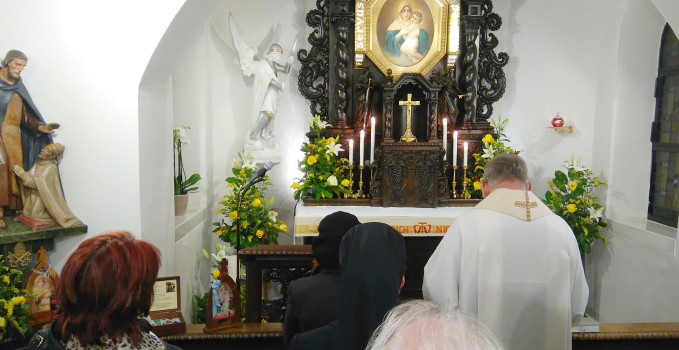 Thursday, 14 October, at the Original Shrine, “Who does not understand German?” asked Fr. Egon Zillekens at the beginning of the night blessing. Although this tradition is not established in Germany, it is something known and valued in other countries in the midst of the novena for 18 October: For many, who gathered in the Original Shrine on this night, there is a tradition that night after night for many years now has gathered youths and adults from different countries who happen to be at Schoenstatt – as pilgrims or as residents.

This night, Ana Lucía Ivaldi, from Villa Ballester, Argentina, placed her Pilgrim Mother on the communion rail. A young girl inspired by this places hers there as well.

Approximately 2,000 letters to the MTA in the jar

I had already quietly placed about 150 sheets of paper tightly printed on both sides in the jar. They contained emails/letters sent during the last month via schoenstatt.org directly to the Mother of God in the Original Shrine. They came from almost every country where there is a Schoenstatt family. They even came from countries that are mentioned often when speaking about the spread of Schoenstatt: Singapore, Qatar, El Salvador, Guatemala, Belize, Canada, Holland…Petitions, expressions of gratitude, prayers, commitments, gratitude: and now they fill the jar in the Original Shrine.

“Who does not understand German?” Hands are raised… “Where are you from?” “Argentina, Costa Rica, Paraguay, Chile…” There was also someone from India, and yes, there were also some Germans, so it was decided to pray the simple texts of the “Night Blessing” in Spanish and German. A young girl from Costa Rica read the text in Spanish, and Fr. Egon read them in German, and at times he guided them in both languages.

Tonight we want to renew our Covenant of Love once again.

We do it reflecting on what has happened during the day…

Thinking about the people that we have met,

Which has allowed us to make the covenant with you and with others,

In what did not turn out well and also in how we have failed.

This night we do not come with empty hands

And in a moment of silence we place everything in the jar. 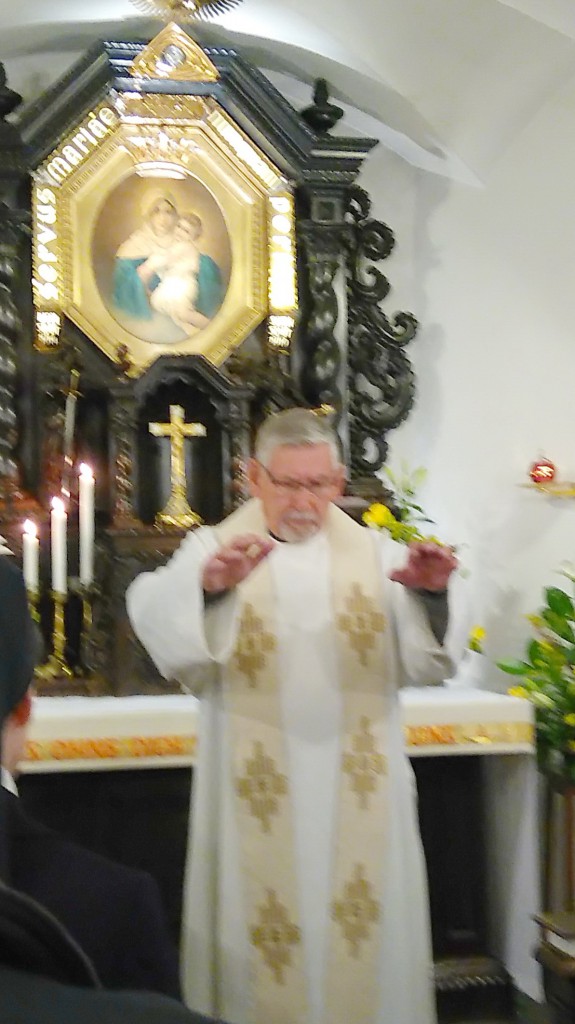 The Covenant prayer is recited, and then the moment everyone has come for –the Night Blessing is given. It is a blessing of solidarity and a blessing of encounter since Fr. Egon Zillekens asked the participants to name whom should be included in this blessing. And they did – the youths who are preparing Covenant Night, all the pilgrims who are coming for 18 October, refugees, all those who will renew their Covenant of Love at some Shrine on 18 October, a sick person, Pope Francis, the synod fathers, Dequení children and collaborators…

Good Father God, bless all those who are here on this night and who feel the grace and commitment of being in this place where so many want to come on pilgrimage.

Bless now and from this place every one of those who have left their suffering in the jar of the Capital of Grace on this day.

Bless now and from this place every member of our family who is seriously ill.

Bless now and from this place the people who are in most need of our solidarity.

Bless now and from this place every member of our family who you will call to your side this night.

Bless now and from this place the person who we especially entrust to your Covenant on this night.

Bless now and from this place the people who suffer from violence, terrorism, and natural catastrophes.

Bless now and from this place the ecumenism of Christians and the dialogue among religions.

The Original Shrine seems to become larger, filling itself with hundreds and hundreds of people.

“Many people have already requested the texts,” Fr. Egon Zillekens commented upon returning to House Marienau on a rainy, cold night a few days before 18 October.

Yes, this Night Blessing is a blessing.