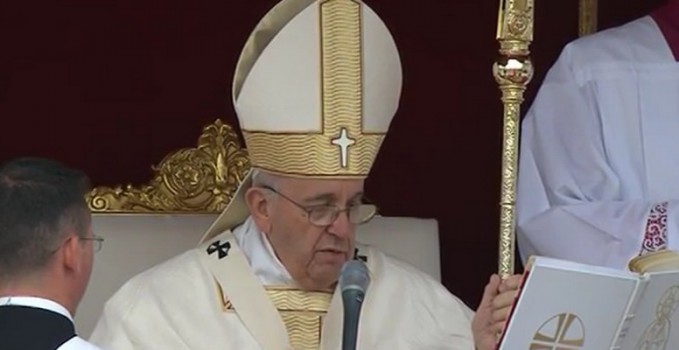 True power is in service

“The radiant witness of these new saints inspires us to persevere in joyful service to our brothers and sisters.” These were the Pope’s words during the homily during the Mass for the canonisation of St. Mary of the Immaculate Conception, St. Vincent Grossi and Sts. Luis Martine and Maria Celia Guérin on 18 October during the Synod of Bishops.

In his homily, Francis gave particular emphasis to one of the key phrases of his pontificate: True power is in service. “Jesus is the Servant of the Lord. His life and death, marked by an attitude of utter service, they were the cause of our salvation,” reminded the Pope, who took for himself the image of Jesus standing in front of his disciples as they asked who would be at his right hand and his left hand in the Kingdom they imagined. Jesus gives them the possibility to “fully partake of his destiny of suffering, without, however, promising their sought-after places of honour. His response is to invite them to follow him along the path of love and service, and to reject the worldly temptation of seeking the first place and commanding others.”

Faced with people who seek power and success in order to be noticed, who want their achievements and efforts to be acknowledged, the disciples are called to do the opposite,” said Francis, indicating that it is Christ himself who shows that “service is the way for authority to be exercised in the Christian community. Those who serve others and lack real prestige exercise genuine authority in the Church.”

Complete text of the Pope’s homily:

Today’s biblical readings present the theme of service. They call us to follow Jesus on the path of humility and the cross.

The prophet Isaiah depicts the Servant of the Lord (53:10-11) and his mission of salvation. The Servant is not someone of illustrious lineage; he is despised, shunned by all, a man of sorrows. He does not do great things or make memorable speeches; instead, he fulfils God’s plan through his humble, quiet presence and his suffering. His mission is carried out in suffering, and this enables him to understand those who suffer, to shoulder the guilt of others and to make atonement for it. The abandonment and sufferings of the Servant of the Lord, even unto death, prove so fruitful that they bring redemption and salvation to many.

Jesus is the Servant of the Lord. His life and death, marked by an attitude of utter service (cf. Phil 2:7), were the cause of our salvation and the reconciliation of mankind with God. The kerygma, the heart of the Gospel, testifies that his death and resurrection fulfilled the prophecies of the Servant of the Lord. Saint Mark tells us how Jesus confronted the disciples James and John. Urged on by their mother, they wanted to sit at his right and left in God’s Kingdom (cf. Mk 10:37), claiming places of honour in accordance with their own hierarchical vision of the Kingdom. Their horizon was still clouded by illusions of earthly fulfilment. Jesus then gives a first “jolt” to their notions by speaking of his own earthly journey: “The cup that I drink you will drink… but to sit at my right hand or at my left is not mine to grant, but it is for those for whom it has been prepared” (vv. 39-40). With the image of the cup, he assures the two that they can fully partake of his destiny of suffering, without, however, promising their sought-after places of honour. His response is to invite them to follow him along the path of love and service, and to reject the worldly temptation of seeking the first place and commanding others.

Faced with people who seek power and success in order to be noticed, who want their achievements and efforts to be acknowledged, the disciples are called to do the opposite. Jesus warns them: “You know that among the Gentiles those whom they recognize as their rulers lord it over them, and their great ones are tyrants over them. But it is not so among you; but whoever wishes to become great among you must be your servant” (vv. 42-44). These words show us that service is the way for authority to be exercised in the Christian community. Those who serve others and lack real prestige exercise genuine authority in the Church. Jesus calls us to see things differently, to pass from the thirst for power to the joy of quiet service, to suppress our instinctive desire to exercise power over others, and instead to exercise the virtue of humility.

After proposing a model not to imitate, Jesus then offers himself as the ideal to be followed. By imitating the Master, the community gains a new outlook on life: “The Son of Man came not to be served but to serve, and to give his life as a ransom for many” (v. 45). In the biblical tradition, the Son of Man is the one who receives from God “dominion, glory and kingship” (Dan 7:14). Jesus fills this image with new meaning. He shows us that he enjoys dominion because he is a servant, glory because he is capable of abasement, kingship because he is fully prepared to lay down his life. By his passion and death, he takes the lowest place, attains the heights of grandeur in service, and bestows this upon his Church.

There can be no compatibility between a worldly understanding of power and the humble service which must characterize authority according to Jesus’ teaching and example. Ambition and careerism are incompatible with Christian discipleship; honour, success, fame and worldly triumphs are incompatible with the logic of Christ crucified. Instead, compatibility exists between Jesus, “the man of sorrows”, and our suffering. The Letter to the Hebrews makes this clear by presenting Jesus as the high priest who completely shares our human condition, with the exception of sin: “We do not have a high priest who is unable to sympathize with our weaknesses, but we have one who in every respect has been tested as we are, yet without sin” (4:15). Jesus exercises a true priesthood of mercy and compassion. He knows our difficulties at first hand, he knows from within our human condition; the fact that he is without sin does not prevent him from understanding sinners. His glory is not that born of ambition or the thirst for power; it is is the glory of one who loves men and women, who accepts them and shares in their weakness, who offers them the grace which heals and restores, and accompanies them with infinite tenderness amid their tribulations.

Each of us, through baptism, share in our own way in Christ’s priesthood: the lay faithful in the common priesthood, priests in the ministerial priesthood. Consequently, all of us can receive the charity which flows from his open heart, for ourselves but also for others, and become “channels” of his love and compassion, especially for those who are suffering, discouraged and alone.

The men and women canonized today unfailingly served their brothers and sisters with outstanding humility and charity, in imitation of the divine Master. Saint Vincent Grossi was a zealous parish priest, ever attentive to the needs of his people, especially those of the young. For all he was concerned to break the bread of God’s word, and thus became a Good Samaritan to those in greatest need.

Saint Mary of the Immaculate Conception, drawing from the springs of prayer and contemplation, devoted her life, with great humility, to serving the least of our brothers and sisters, especially the children of the poor and the sick.

The holy spouses Louis Martin and Marie-Azélie Guérin practised Christian service in the family, creating day by day an environment of faith and love which nurtured the vocations of their daughters, among whom was Saint Therese of the Child Jesus.

The radiant witness of these new saints inspires us to persevere in joyful service to our brothers and sisters, trusting in the help of God and the maternal protection of Mary. From heaven may they now watch over us and sustain us by their powerful intercession.