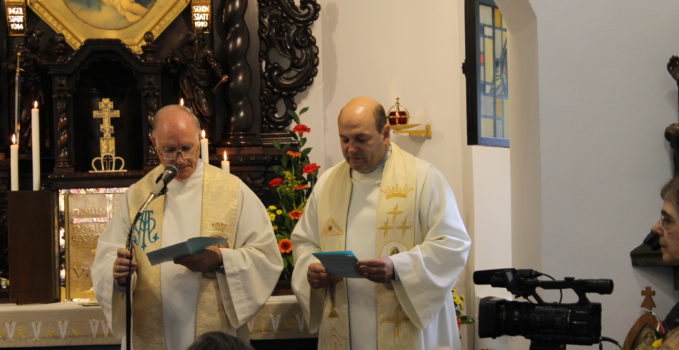 The Shrine is a mission, always

“The Shrine is a mission, always” – the phrase from Fr. Juan Pablo Catoggio, Superior General of the Schoenstatt Fathers, in the introduction, hangs in the air during a simple, multilingual celebration on the afternoon of 15 August for the feast of the Assumption of the Blessed Virgin, with a small crowd from many countries and languages, under the gentle drizzle of the German summer. The shrine is a mission, always – and especially when it comes to the Original Shrine, whose new rector, Fr. Pablo Pol, took up his position and mission in that celebration. —

At this moment he was accompanied not only by many brothers from his community, from his native Argentina and his beloved Nigeria, from Congo and Burundi, but also by his mother and his younger brother, and many Schoenstatters from Chile, Paraguay, Germany, Puerto Rico, Spain and Brazil. 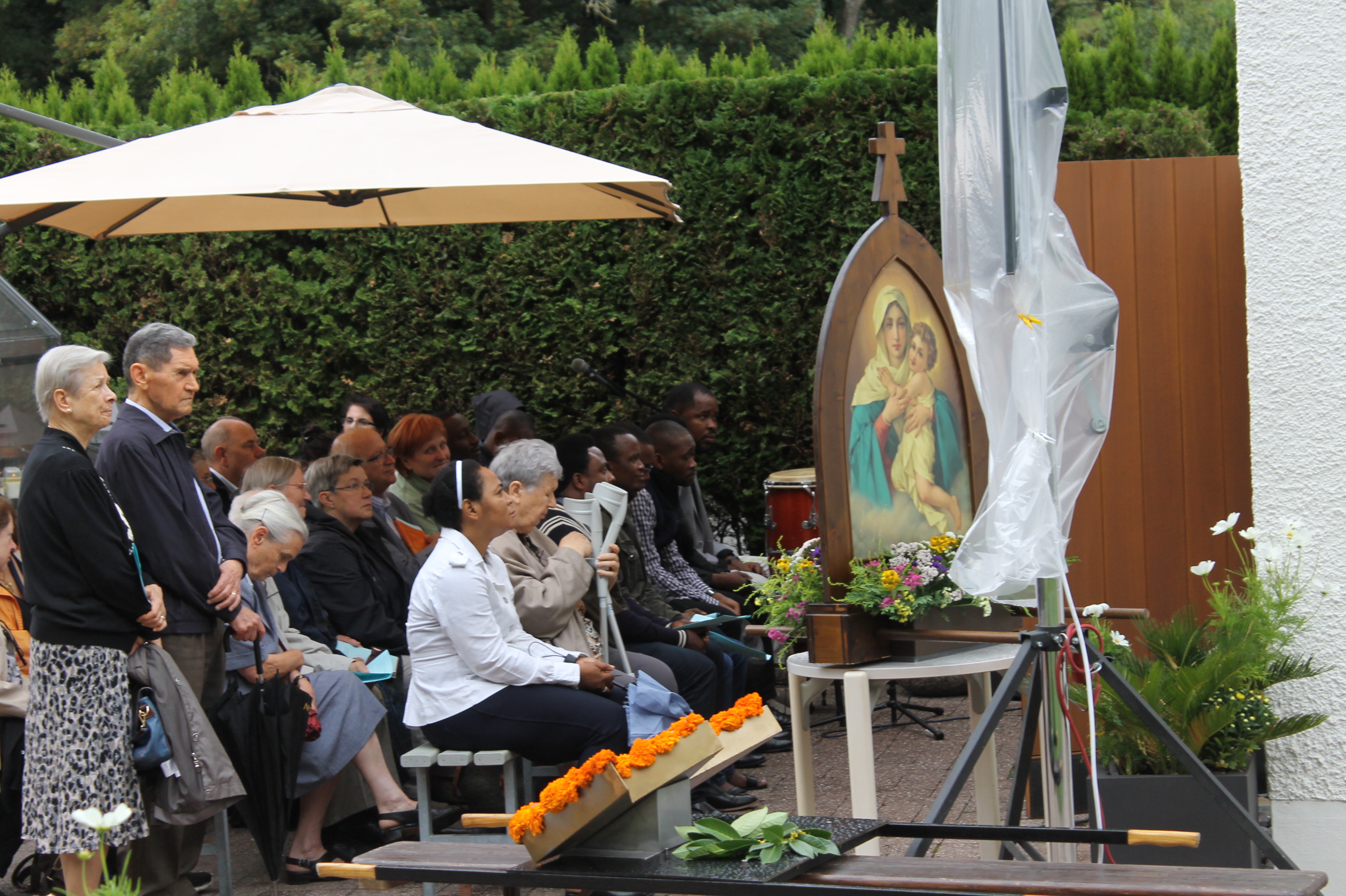 The transition, amidst surprise and special gifts

It’s a moment of transition. After five years, Fr. Antonio Bracht from Brazil, a member of the General Council of the Schoenstatt Fathers and the spiritual director for the Women’s Federation, concluded his task as the rector of the Original Shrine, which has now been taken up by Fr. Pablo Pol, from Argentina and the general treasurer of his community. “It’s a suprise to find myself here at this time, because I dodn’t expect to arrive in Germany a few months ago,” he admitted during his brief greeting in Spanish and English.

Fr. Antonio Bracht received sincere thanks with words, gestures, and a special gift: a slate from the roof of the Original Shrine (yes, one of the famous slates from the renovations done many years ago, which at the time were sent to many of the shrines being built); and a stone from the inner side wall – where the chimney used to be and where, during other renovations, they placed thousands of paper letters and thousands more are stored on a pen drive.

The Shrine is a mission, a mission for those who have the gift of living nearby, the gift that becomes a task for many who cannot always or may never be able to visit it. “Were you at the Original Shrine?” Catalina Hutt, from Costa Rica asked me when she saw a photo of the moment on Instagram. “Yes, a fleeting visit, I came straight from my office in Cologne…”. “Don’t forget to pray for us”, she tells me. Like so many more. “I showed the Blessed Mother my cellphone, where I have have all of you,” I told her. “I’ll go to the shrine on your cell phone,” she answered. The Shrine is a mission, always. 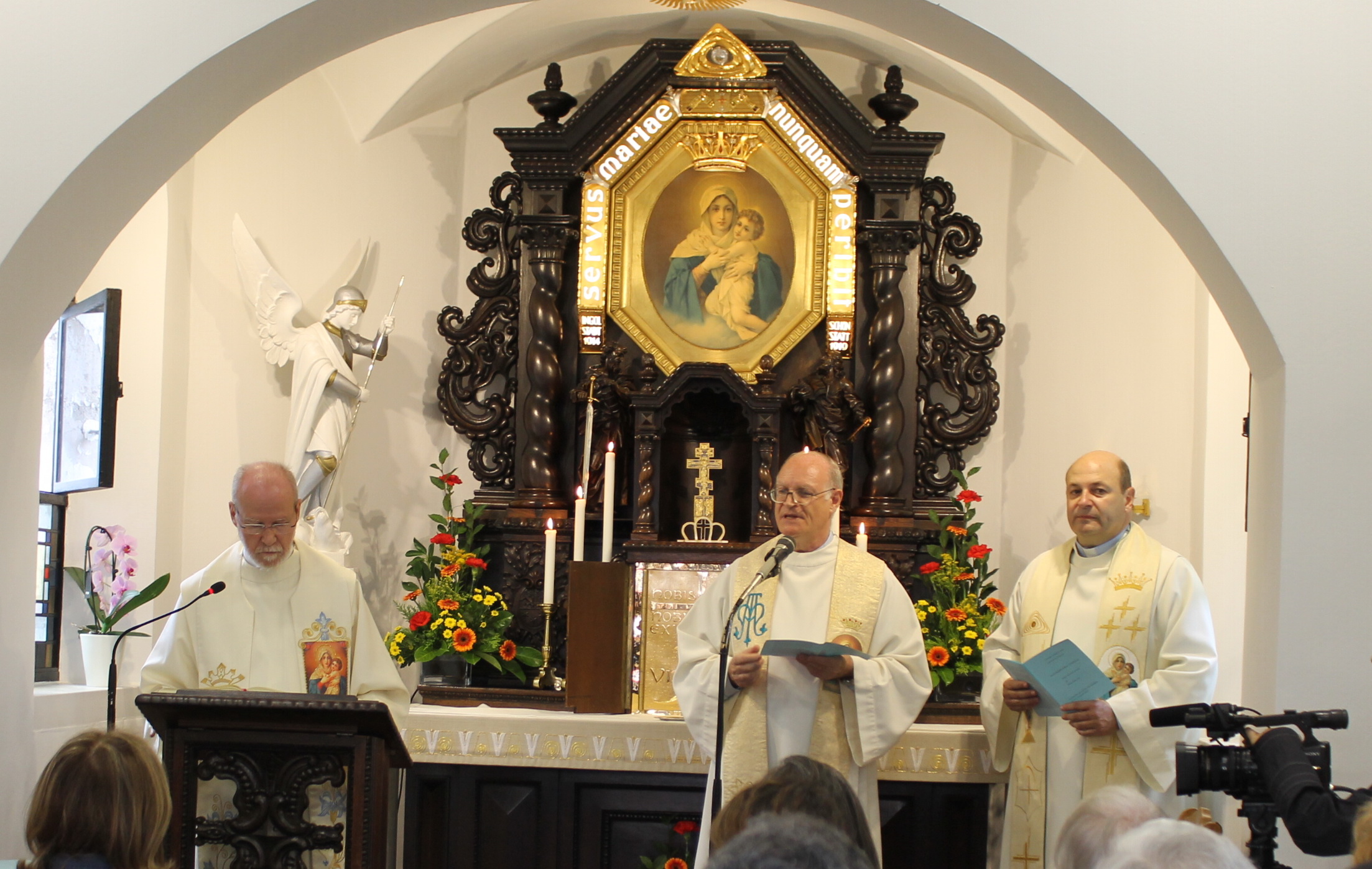 All together for the Original Shrine

Symbolically, Fr. Antonio Bracht handed the key of the Original Shrine to Fr. Pablo Pol. It is a small key, for a small shrine. So small that it’s always too small; so small that even among the first congregants there were those who thought of tearing it down so that they could build a bigger church for the Blessed Mother; so small that sometimes we must remember that it is the holiest and the most important thing we have in Schoenstatt. For this reason, our collaboration with the Original Shrine is to show and reveal that, vitally and apostolically, this small place is our common place and our special source of grace. Without the shrine, we are not and cannot be the Family of the Father, nor as the Apostolic Movement at the service of the Church and society.

Fr. Pablo clearly expressed his wish that we all collaborate to make our Original Shrine shine, in this place and throughout the world, among those who visit it as pilgrims, both physically and spiritually. “I’ll go on your cellphone…”.

After the celebration, everyone was invited to gather for a light dinner in the Pilgerheim. Earlier, Fr. Pablo personally greeted many people; Fr. Juan Pablo Catoggio did the same. He began to greet and share with those present, and the numbers and the noise increased when someone from Argentina and Germany appeared, who met a few months ago at the WYD in Panama, and then some participants of the Hoerde Meeting from Spain and a pilgrimage from Paraguay that arrived at that precise moment. A network moment.

The Original Shrine is a mission, an international mission, a mission for everyone and for always, as was engraved anew in the heart, yesterday afternoon, in listening to the words of the Founding Document in the Shrine: 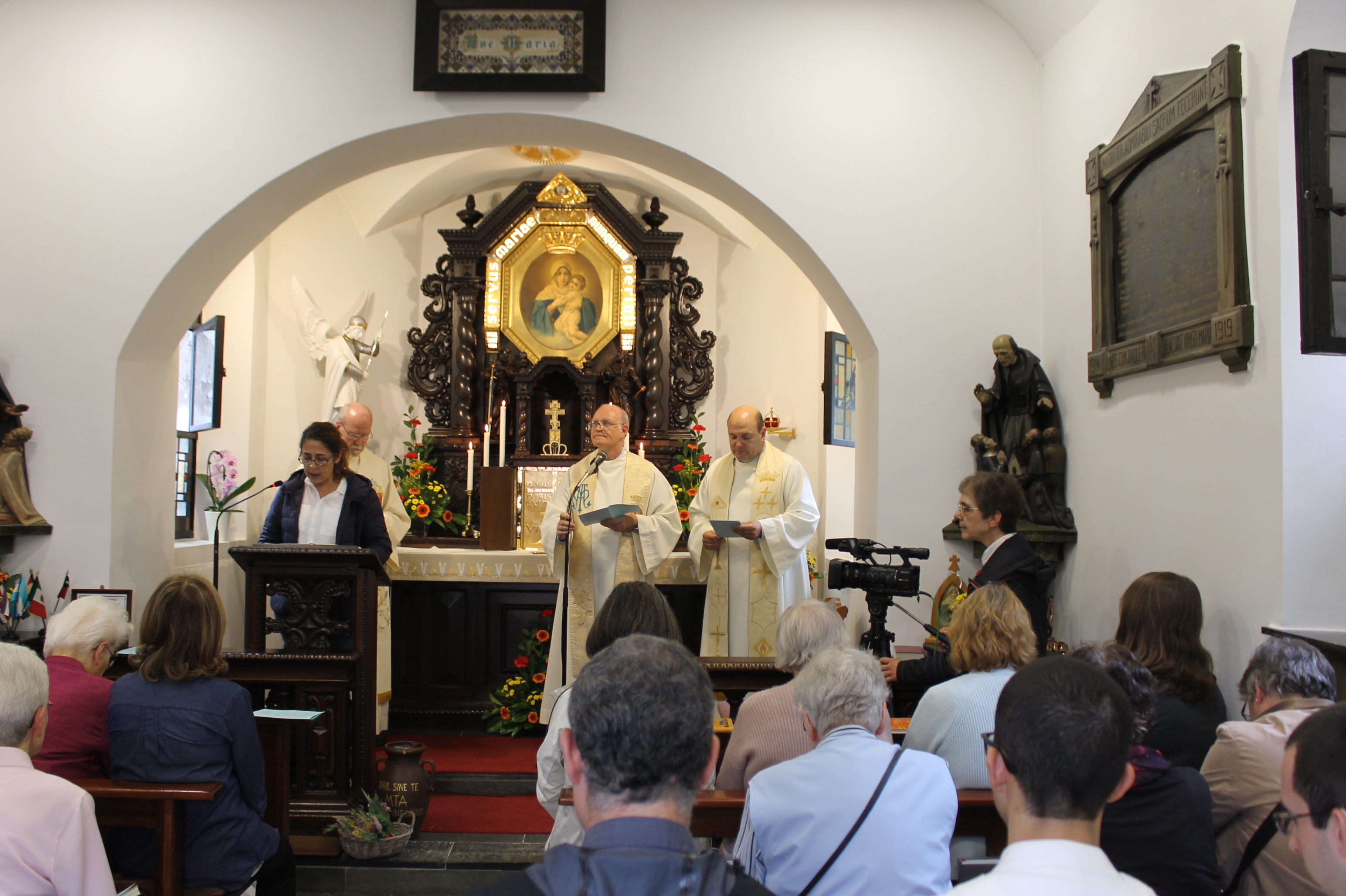 Would it not be possible for our little sodality chapel to likewise become for us the Tabor on which the glory of Mary would be revealed? Undoubtedly, we could not accomplish a greater apostolic deed nor leave our successors a more precious legacy than to urge our Lady and Queen to erect her throne here in a special way, to distribute her treasures, and to work miracles of grace. You gather what I am aiming at: I would like to make this place a place of pilgrimage, a place of grace for our house and for the whole German province, and perhaps even further afield. All those who come here to pray shall experience the glory of Mary and confess: “It is good for us to be here. Here we will build our tents! Here our favorite place.” A bold thought, nearly too bold for the public, but not too bold for you. How often in world history have not small and insignificant beginnings been the source of great and greatest accomplishments? Why could that not also hold true in our case?” 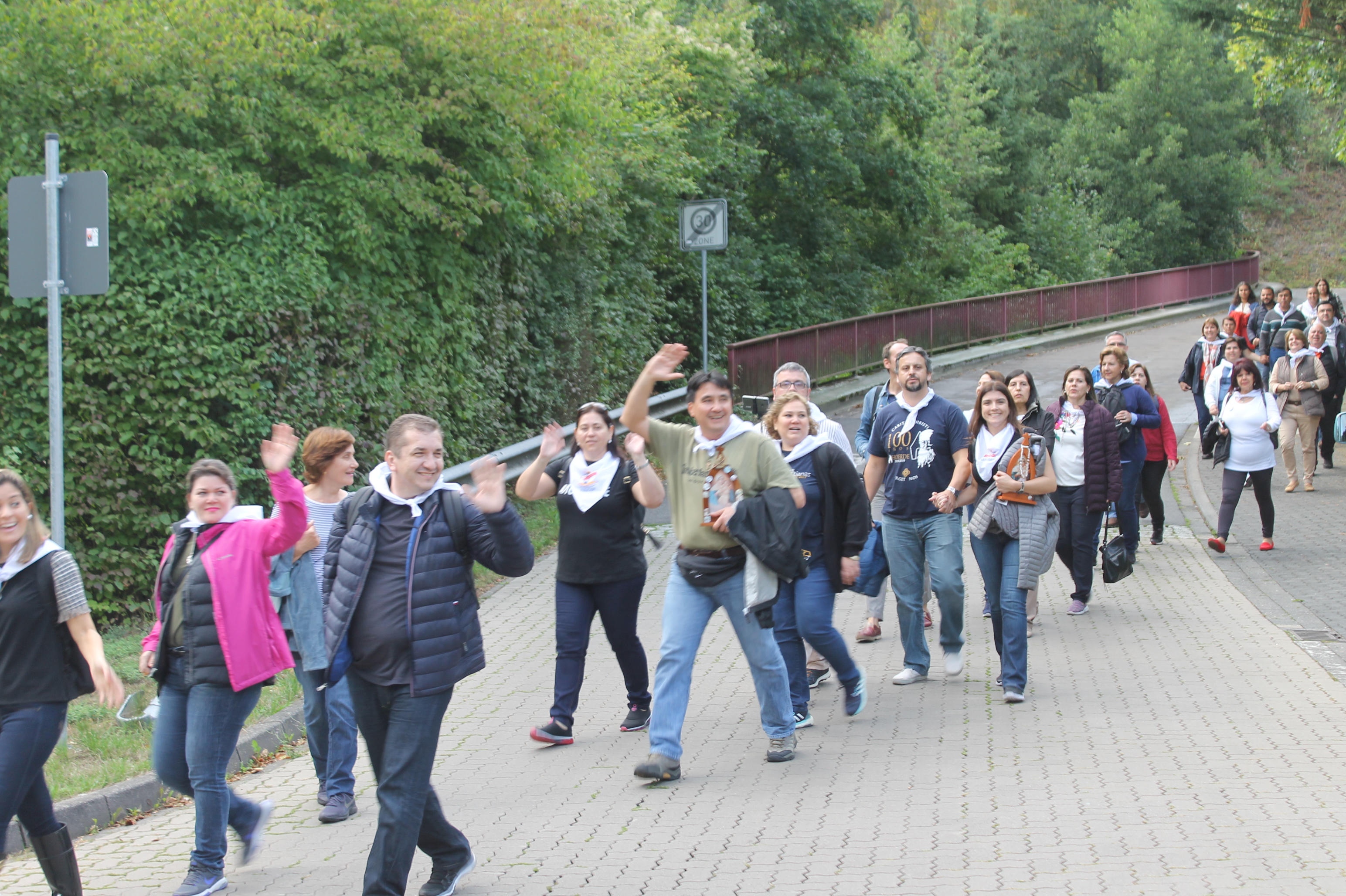