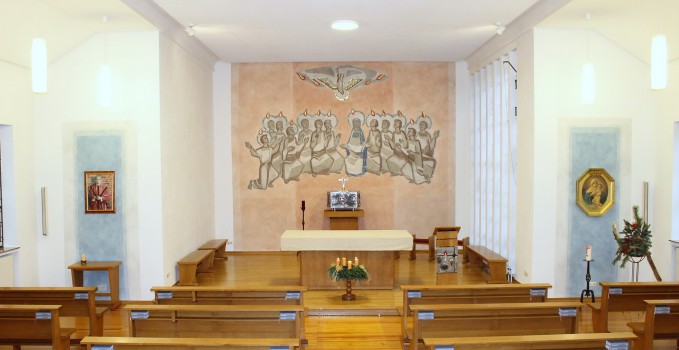 “The LORD will be your light forever,” (Isaiah 60:19) – impressions of a visit to Marienau House chapel

“Nations shall walk by your light, kings by the radiance of your dawning … the LORD will be your light forever, your God will be your glory” (Isaiah 60). One of the most beautiful Advent texts from the Old Testament involuntarily comes to mind when you open the heavy, beautiful wooden door of the House Marienau chapel. It is still the same chapel, the chapel where Father Kentenich celebrated Holy Mass, a place of many precious memories and encounters, of prayer and praise of God… But where is this dark room with the charm of the fifties? It disappeared. And instead you find a light-filled place, a room that seems wider and brighter than ever, with warm white light and bright soft yellows, blues and reds.

“The room has something special…” As María Jesús Fernandez, the Chilean artist who designed God-Father Church in Argentina or the House Regina chapel in Schoenstatt, saw the Marienau chapel, she saw a potential that many had never seen. And began. 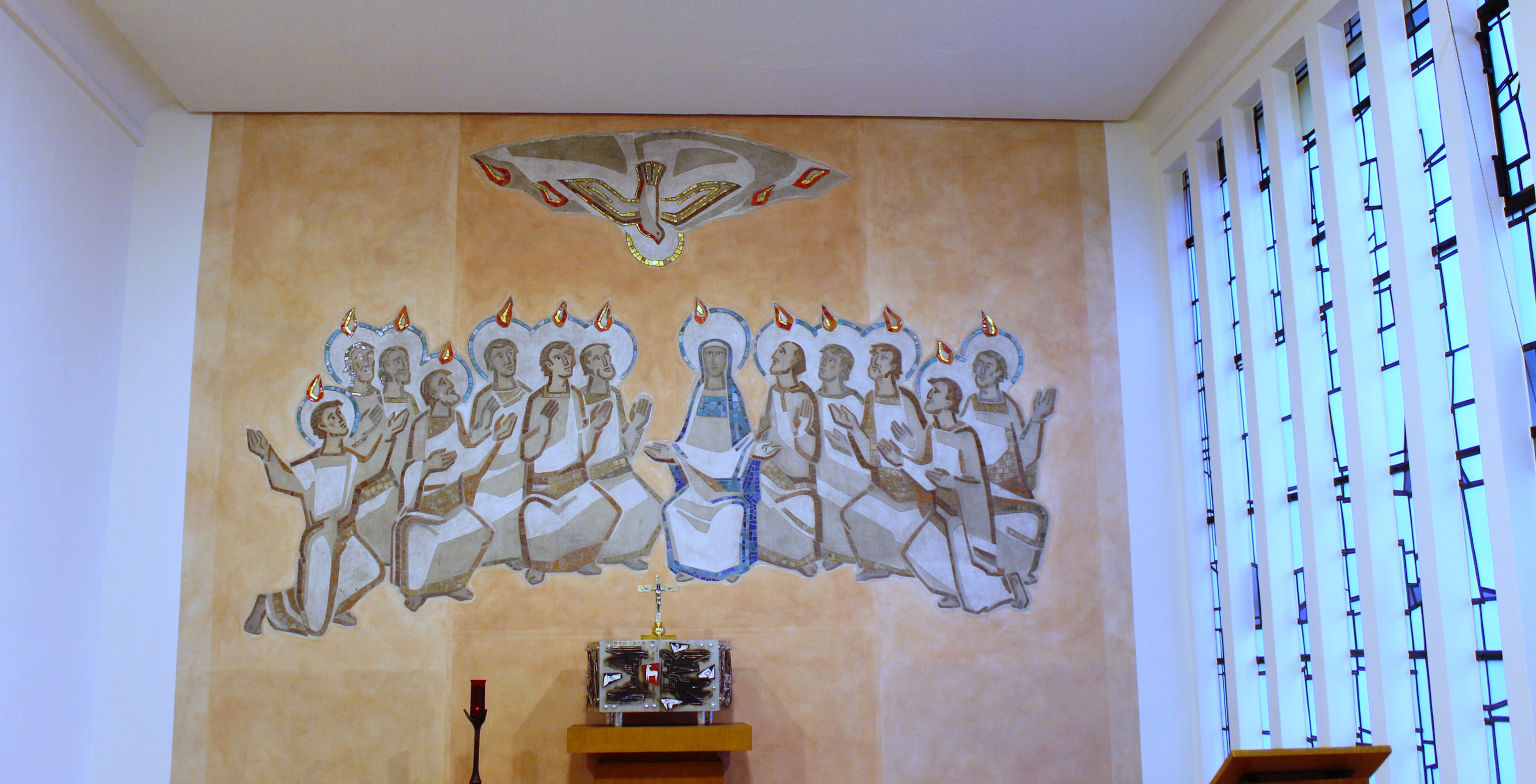 After the stained windows were professionally cleaned, more light now spills into the chapel. The mosaic in the choir has been cleaned as well, is now sitting on a warm, red background that adds depth and beauty. Right and left of the altar space bright, differing blue colors give a wonderful effect to the images of the Mother Thrice Admirable of Schoenstatt and of Karl Leisner.

When Holy Mass is celebrated, an additional light is added that underlines the festivity and turns every entry of the priests to the altar into a remembrance of the Easter Vigil …

And then a light falls on top of the altar, the center of the Eucharistic celebration. The artist has insisted on it. A message that harkens back to the magnificent Gothic cathedrals with which the people built an image of heaven. The Gothic cathedral is shaped to receive the main light from above, causing a mysterious fullness of light that makes for a transfiguration of the whole space, which seems to glow itself. Something like this, lets you experience the newly designed chapel of Marienau.

“The altar on which our Father had celebrated is unchanged,” said Rector M. Zillekens. A successful blend of remembrance, preservation and renewal, a masterpiece of style, art and simplicity. 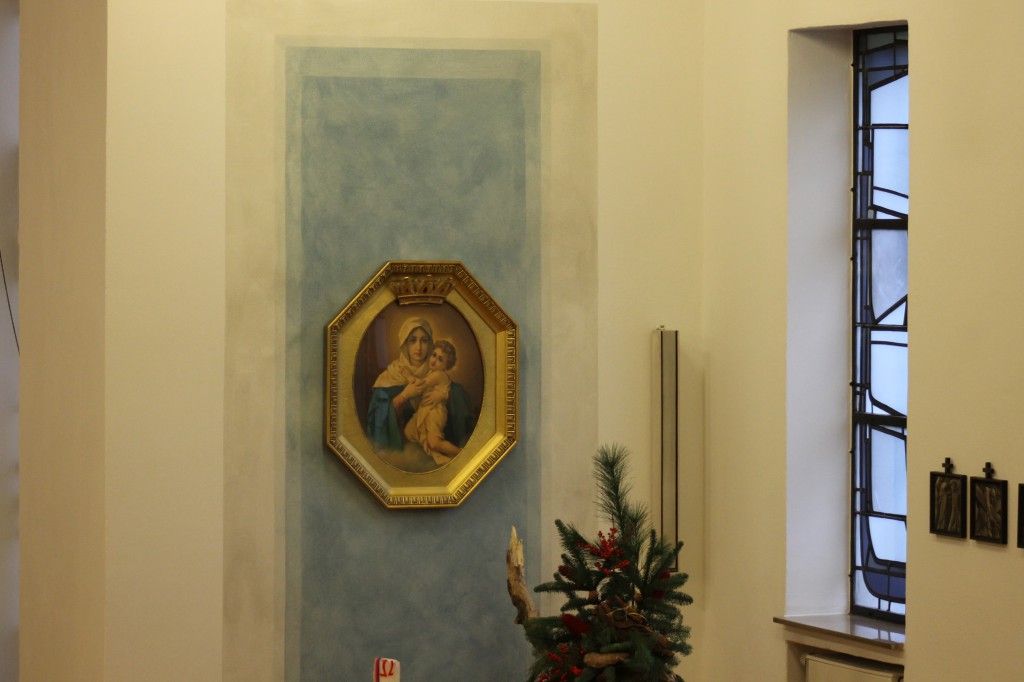 Before, it hungbeside the door of the chapel, painted black and somehow too big and almost threatening. María Jesús Fernandez removed the black coat of paint, carefully restored the cross, and has given it a place in the back of the chapel on the small gallery, directly in view of the priest celebrating mass.
This area of ​​the chapel is not quite ready yet, but you can already deduce that this will be a place of meditation not only in Lent … 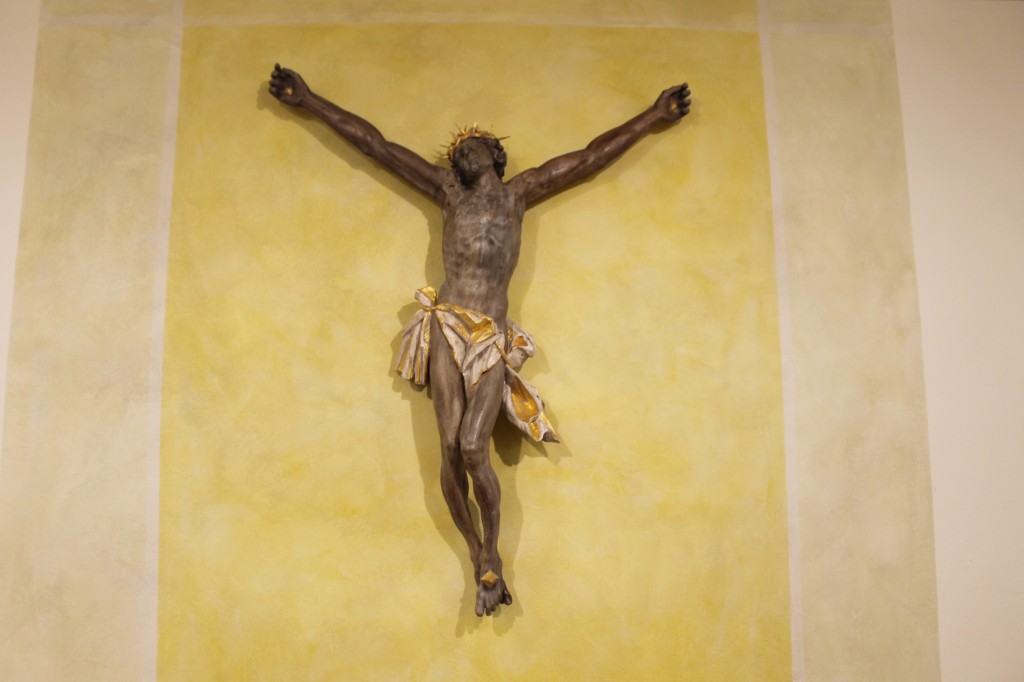 Those who come to Schoenstatt during this Christmas, or some other time even later, should plan a visit to this chapel, because it is an invitation to pray and wonder. And now even more than before, it is also an invitation to have an encounter with Father Kentenich and that Pentecost culture of many languages and audacious decisions in the bright light of faith and this reaching out to which he invites his Schoenstatt.