The Holy Door opened at Tupãrenda

Describing everything experienced that morning during the opening of the holy door at Tupãrenda is difficult to put into words. As they began to open the door, I heard a woman say: “I’ve got goose bumps.”

The doors of mercy were opened wide –around 10,000– from one end of the earth to the other

On Sunday morning, 13 December, Pope Francis opened his cathedral, the Basilica of St. John Lateran’s Holy Door. It is the third jubilee door Francis has opened wide after the Bangui Cathedral in the Central African Republic, on 29 November, and St. Peter’s, on 8 December.

Through this symbolic gesture, the Church has fully emerged into the Extraordinary Holy Year proclaimed from 8 December 2015 to 20 November 2016, and it invites us to “discover God’s presence and his tenderness as a Father.”

Francis wants this ecclesial event not only to be celebrated in Rome. For this reason, on the third Sunday of Advent, also called Gaudete Sunday, or Sunday of joy, the Doors of Mercy were opened in all the world’s cathedrals, and in other churches chosen by each local bishop. In total, we could be speaking of some 10,000 from one end of the earth to the other. Among them, there are several Schoenstatt Shrines: the Original Shrine, and several shrines in Argentina, Brazil, Paraguay, as well as the María de la Santísma Trinidad [Mary of the Most Holy Trinity] Church in Tupãrenda, Paraguay. 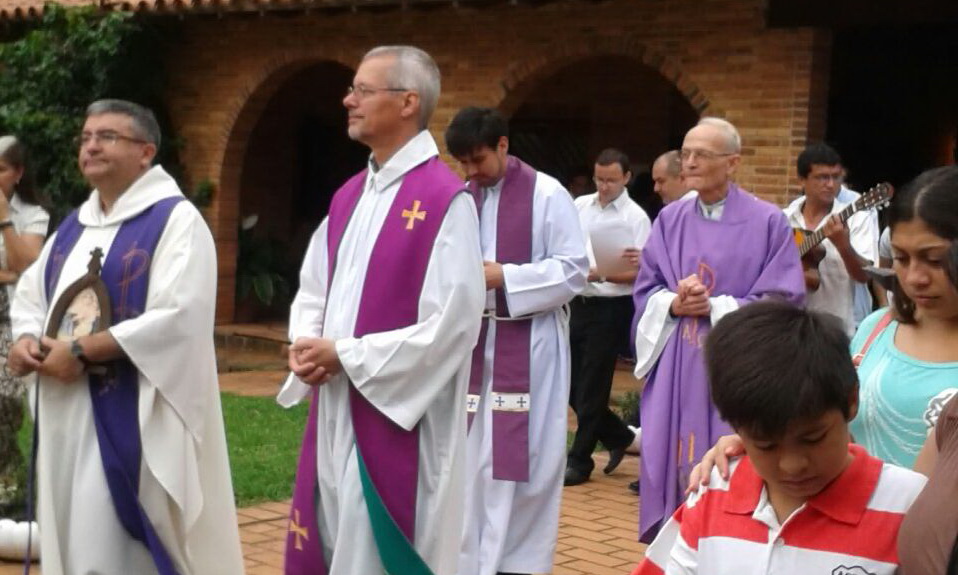 The Holy Year of Mercy began

On 13 December, the Holy Year of Mercy began in Tupãrenda (just as in many Schoenstatt Shrines!). It began with a beautiful pilgrimage from the Pilgrims’ House to María de la Santísma Trinidad Church. The pilgrimage was enlivened by songs and through the sound of the church bells, which publicly rang for the first time to call all the faithful and pilgrims.

Once we were at the atrium of the María de la Santísima Trinidad Church, Frs. Antonio Cosp (who celebrated the Mass), Pedro Kühlcke, Bernardo Parra and Oscar Saldívar opened the door of Mercy at Tupãrenda. 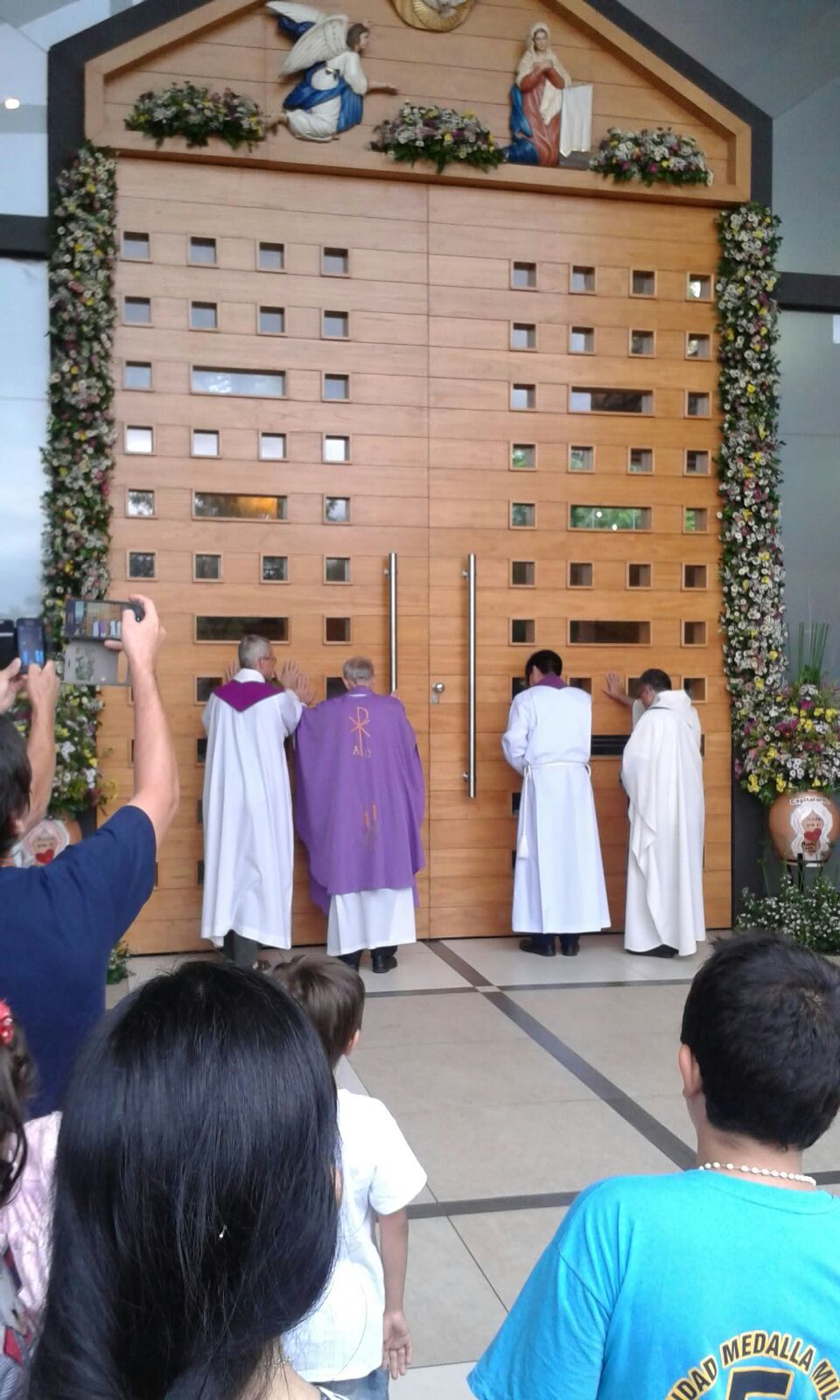 Many people crossed that holy door with joy, devotion and piety. It was impressive to see “God’s pilgrim people.” Then the beautiful choir, the Tupãrenda Chorus, enhanced the celebration of the Mass by singing the Jubilee Hymn in Spanish and repeating the chorus, “Merciful like the Father.”

Fr. Oscar Saldivar preached, and he did so by referring to the gestures that we had just carried out: “To be pilgrims of mercy.” He explained what it means to go on pilgrimage, and at the same time, he invited everyone to go on pilgrimage, to go out from the enclosure that we carry within us, in our heart.

The weariness of the heart

“We also know every pilgrimage requires effort,” he said. “Mercy is also a goal to reach and one that requires commitment and sacrifice.” It can happen that the temptation of “weariness of heart” can appear on the road of mercy: sometimes we tire of asking for forgiveness or forgiving; sometimes we tire of starting over; sometimes we tire of loving, trusting again and helping. When this weariness appears on our road, it would do us good to listen in our heart to the words that John the Baptist addresses to us today: “…but he who is mightier than I is coming… (Luke 3:16).” Jesus whose mercy and love is mightier than our weariness and sins.”

After the Mass, everyone went on pilgrimage to the Shrine, where they felt sheltered in the Mother and Queen’s maternal heart.

To live a heartfelt moment

“I would have liked to take more photos,” Mima Cardona commented, “but it was too distracting, and I wanted to live this heartfelt moment. It was an opportunity to meditate and to give everything to God and also to pray for our deceased loved ones.” 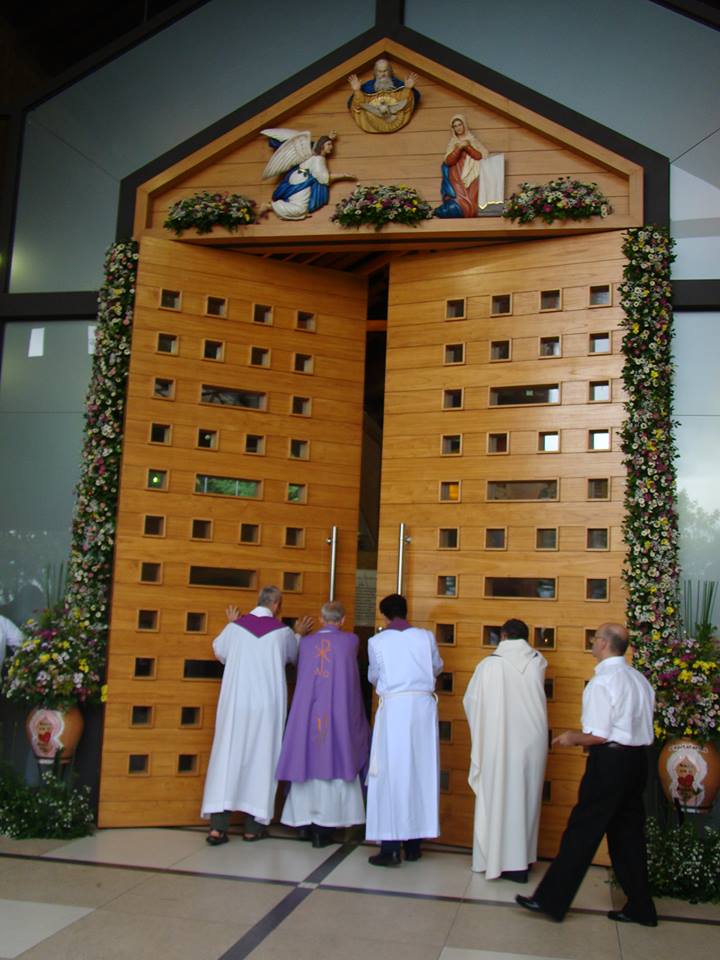