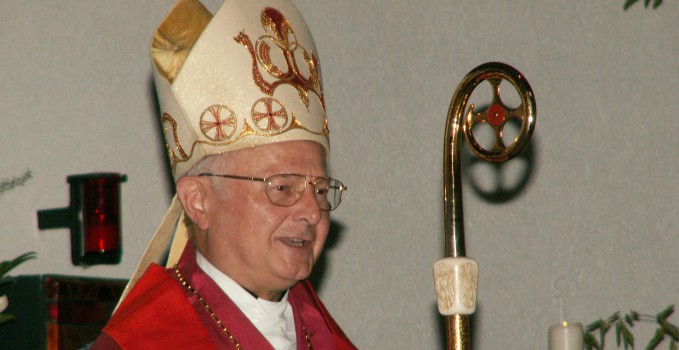 Mary, the Woman Setting Out: Archbishop Emeritus Zollitsch with the Freiburg Cathedral Choir in Schoenstatt

“Schoenstatt, Vallendar on the Rhine, which celebrated its centenary last year, is the centre of a worldwide spiritual movement. Its focal point is a little chapel in the valley where Mary is honoured as “Thrice Admirable Mother”. The picture of grace, which arrived in Schoenstatt from Freiburg a hundred years ago, is well known worldwide, as the members of the cathedral choir experienced last year when they visited South America”. These were the words of the invitation addressed to the members of the Freiburg Cathedral Choir and their friends announcing a pilgrimage. During the trip mentioned above the Cathedral Choir sang, among other venues, at the centenary celebrations of the Schoenstatt Movement in Buenos Aires in the Teatro Colón, the most famous theatre in the city – an experience that moved them and filled them with enthusiasm. Spiritually accompanied by Archbishop Emeritus Robert Zollitsch DD, the choir made a pilgrimage last weekend to Schoenstatt and Kevelaer.

The press release of Freiburg Cathedral Music – Cathedral School, Freiburg, on 1 October 2015, stated, “The hospitality in Haus Marienau and a welcome by Fr Egon M. Zillekens, Rector, made for a warm arrival at the centre of Schoenstatt. The witty hint: All important things here begin with K … determined the further course of the evening. The kitchen offered a happy supper, we took part in an evening service in the chapel (Kapelle), not without a small musical contribution, and in the snug (Klause) the evening came to an end, but not too quickly. Fr Zillekens came to us later in the snug to check if everything was in order, and then after some hesitation allowed himself to be moved to join us. He spoke impressively and in a very lively way about his life as a pastor.”

In his sermon in the Pilgrims’ Church in Schoenstatt, Archbishop Zollitsch described Mary as the “Woman setting Out”, a woman going out in the spirit of Evangelii Gaudium. “As mother she is not the distant observer and world-estranged icon of glory. As mother she is turned towards and devoted to each of her children with tender and burning love. As at Cana, she is the friend, as Pope Francis wrote, “who is ever concerned that wine is not lacking in our lives. She is the woman whose heart was pierced by a sword and who understands all our pain.” (EG 286) She reaches out her hand towards us and invites us to take her hand, so that led by her and under her protection we may walk the pilgrim path of our faith, and also reach the goal God has promised us, and where she awaits us, in order to take her children into her arms.”

This, according to Zollitsch, has been the experience of pilgrims who have come to Schoenstatt for over a hundred years. “That is a special characteristic of the place of pilgrimage at Schoenstatt. Mary is not only our great example and comforting and understanding mother. She is, as Pope Francis never ceases to stress, the missionary, the active woman, who also sets out today and acts – for the Church and each individual person.”

Mary, the Woman Setting Out

The first thing Mary did after she heard that she was to become the Mother of the Son of God, was – as we heard in the Gospel – to set out. She set out on the road over the mountains to her cousin Elizabeth, in order to bring the Redeemer to the people even before he was born.