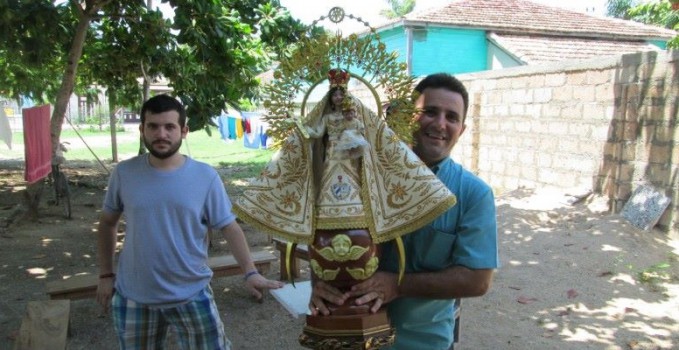 Our first impression of Cuba was literally, a blast of hot air on our faces that almost knocked us to floor! When we arrived, besides getting lost in the small Havana airport, twenty-three Spanish girls (and some Cubans) singing the Franz Reinisch Hymn quite loudly welcomed us; it was a triumphant entrance (not bad, we can’t complain). Then we bid farewell to the missionaries from Spain, with crying, tears, come back soon, we will not forget you, etc. etc. etc. by the Cubans and the Chileans (we are still crying for them).

In the parish of Santa Cruz del Sur

The trip to Santa Cruz from Havana was a very “Cuban” experience. It was an epic, ten-hour trip on a bus with seats, which if we thought they were bad, showed how little we knew about other buses. But anyway, we ate some very delicious things, we traveled a lot, we slept in the heat, and we arrived at our little house in the parish of Santa Cruz del Sur at dawn.

We stayed with Fr. Bladimir of the Federation of Schoenstatt Diocesan Priests, his mother, Maria, who is like our mother here, some seminarians, who come and go with two dogs, Shakira, the fierce one and Napoleon, her son, who is a silly yet nice dog. 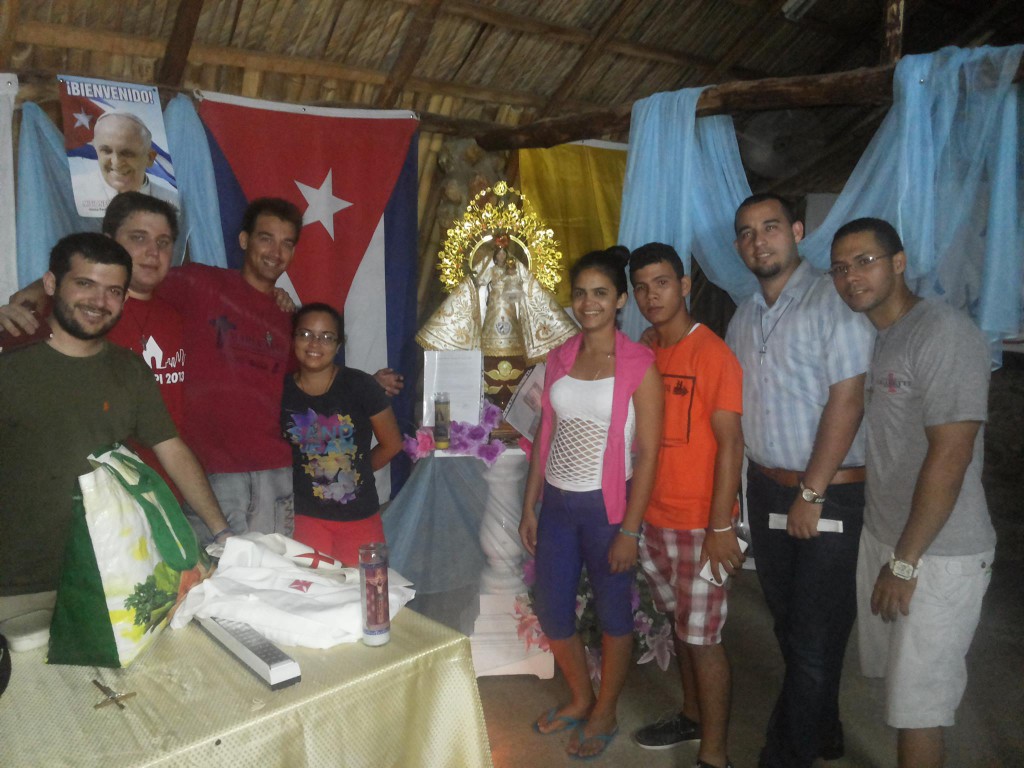 Prayer of Heavenwards with the parish’s Schoenstatt youth

During the first week, we had a forced landing with the novena for the Virgen de la Caridad del Cobre [Virgin of Charity from El Cobre], who’s feast day is 8 September, along with the beautiful and revitalizing Lauds at 6:30 a.m. of which we became “fanatics”. We also traveled through Santa Cruz in a horse drawn cart, with the Virgin and the tremendous baggage we carried including music and everything, and the people loved it! What was clear to us is that if you go to Cobre you have to bring us a Virgen de Caridad (and we do not want flowers or a holy card). We participated in the Eucharist with the Blessed Mother in all the town’s neighborhoods, in the homes of the faithful, and we noticed that the Cubans are extremely devoted to the Virgen de la Caridad, the Patroness of the country. At the end of every Holy Mass, we prayed night prayer with the Schoenstatt youths from Santa Cruz, which they had prepared and other youths joined us. We prayed from Heavenwards like never before. There was one book for every three people and they knew it better than us; it was very impressive, when you think that Schoenstatt has been here less than a year. 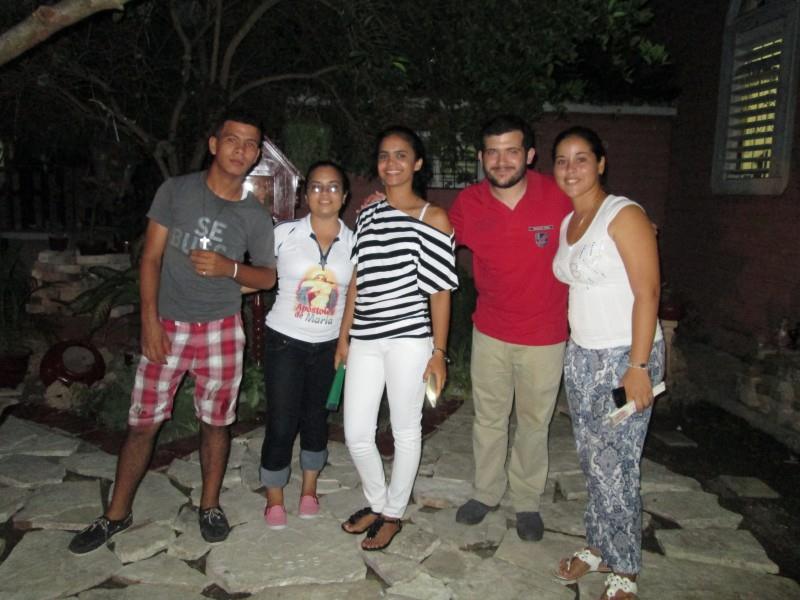 On the eve of the Blessed Mother’s feast day, we had to prepare a “vigil”. Yanitza and Juan Miguel (Charlie) animated the vigil with games, a treasure hunt in the church, dance, trivia, and a surprise band. It ended with everyone singing “Manañitas” [a birthday song] to the Virgen de la Caridad and new songs with the band. The following day, on the feast of the Immaculate Conception, forty-three people were baptized, Holy Mass, and a procession through the streets of Santa Cruz, which turned out very well.

Preparation for the vigil awaiting the Pope

Then there were a couple of days to rest up, but we were surprised with the notice that the parish youths had to prepare the youth vigil for the entire Camagüey province, awaiting the Pope’s visit to Holguín. It was a great surprise for all the youths, who were very excited and committed to the task. We worked very hard, painting T-shirts, the posters, banners, and we rehearsed some beautiful choregraphy that we had a hard time learning (having left our dancing talent in Chile…) among other things. 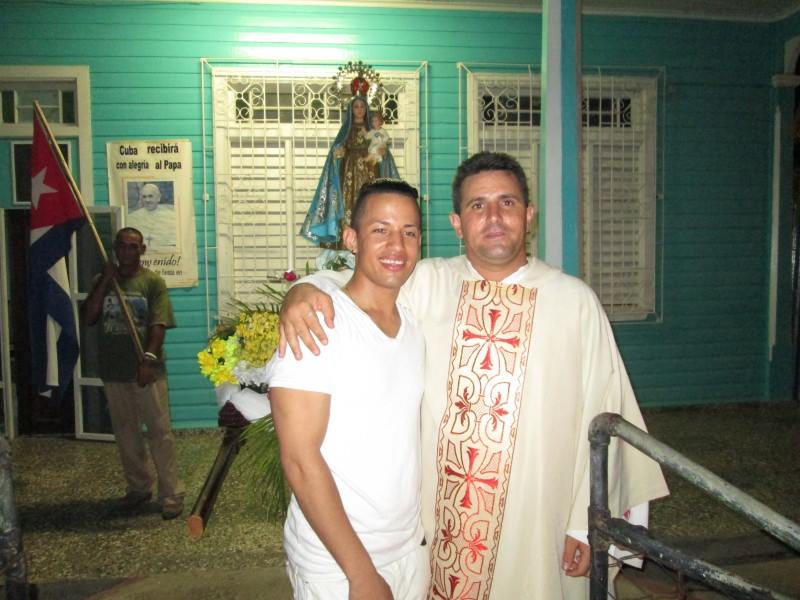 Youths, children and adults want to know more about the Movement

The last days were marked by the Chilean earthquake, and around the 18th, we celebrated very affectionately with Chilean wine and some sopaipillas [fried pumpkin dough] that we made, which were acceptable. We also celebrated our first Covenant Mass on September 18th that was very beautiful, well attended and lively (it was also very different).

The visit of the Spanish girls encouraged many people to approach Schoenstatt and the faith, by which we have been overtaken, since there is much interest in the parish: youths, children and adults want to know more about the Movement. The first group of allies, then the little girl Apostles, the Crusaders, and also the Mothers’ Apostolic League and the Madrugadores [Daybreakers] were established.

Welcome gala for the Spanish girls

Mission Cuba is a project of the Boys’ Youth from the Shrine of Campanario, Chile. At Fr. Bladimir’s invitation, there is a second team of Schoenstatt youths at Camagüey, the city where Fr. Bladimir is working with Schoenstatt groups. They will be at Schoenstatt’s service in Cuba for a few months. Approximately twenty-five girls, who belong to the Girls’ Youth from Spain, were also in Camagüey for a few weeks. Schoenstatt was brought to Cuba ten to fifteen years ago by the first generation of Mission Cuba. 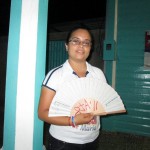 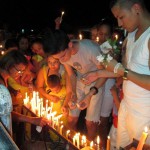 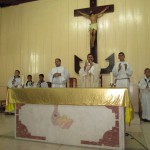 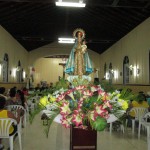