The Joy of the Gospel Tag 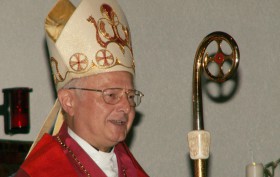 Mary, the Woman Setting Out: Archbishop Emeritus Zollitsch with the Freiburg Cathedral Choir in Schoenstatt

ORIGINAL SHRINE/GERMANY from Maria Fischer • “Schoenstatt, Vallendar on the Rhine, which celebrated its centenary last year, is the centre of a worldwide spiritual movement. Its focal point is a little chapel in the valley where Mary is honoured as “Thrice Admirable Mother”. The picture of grace, which arrived in Schoenstatt from Freiburg a hundred years ago, is well known worldwide, as the members of the cathedral choir experienced last year when they visited South America”. These were the words of the invitation addressed to the members of the FreiburgRead More