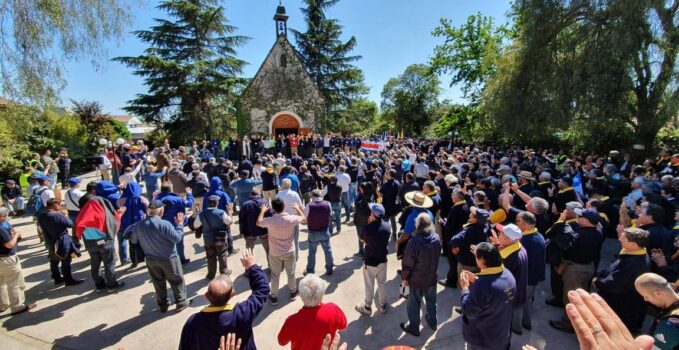 Thirty years of Madrugadores – a new way to be a church

What an extraordinary experience! Half a thousand men kneel at the feet of the Blessed Sacrament, in silence, without mobile phones, without noise, without discomfort, without protests, without nervous laughter. Had I had a better ear, I would only have heard 580 hearts beat faster in this personal encounter with our mother and her son. The Holy Spirit blew over the Madrugadores and filled them with new life, enthusiasm and group spirit. It is not a local event, but an American embrace. Eighty communities from all parts of Chile, from Arica to Coyhaique and from six countries: Argentina, Bolivia, Colombia, Costa Rica, Puerto Rico and Mexico, all together more than 580 participants under the motto: “Let your light shine before the people”. Flags, banners, uniforms (some colorful, others formal) give the picturesque touch to a meeting that commemorates and celebrates the 30th anniversary of the foundation of the Madrugadores. — 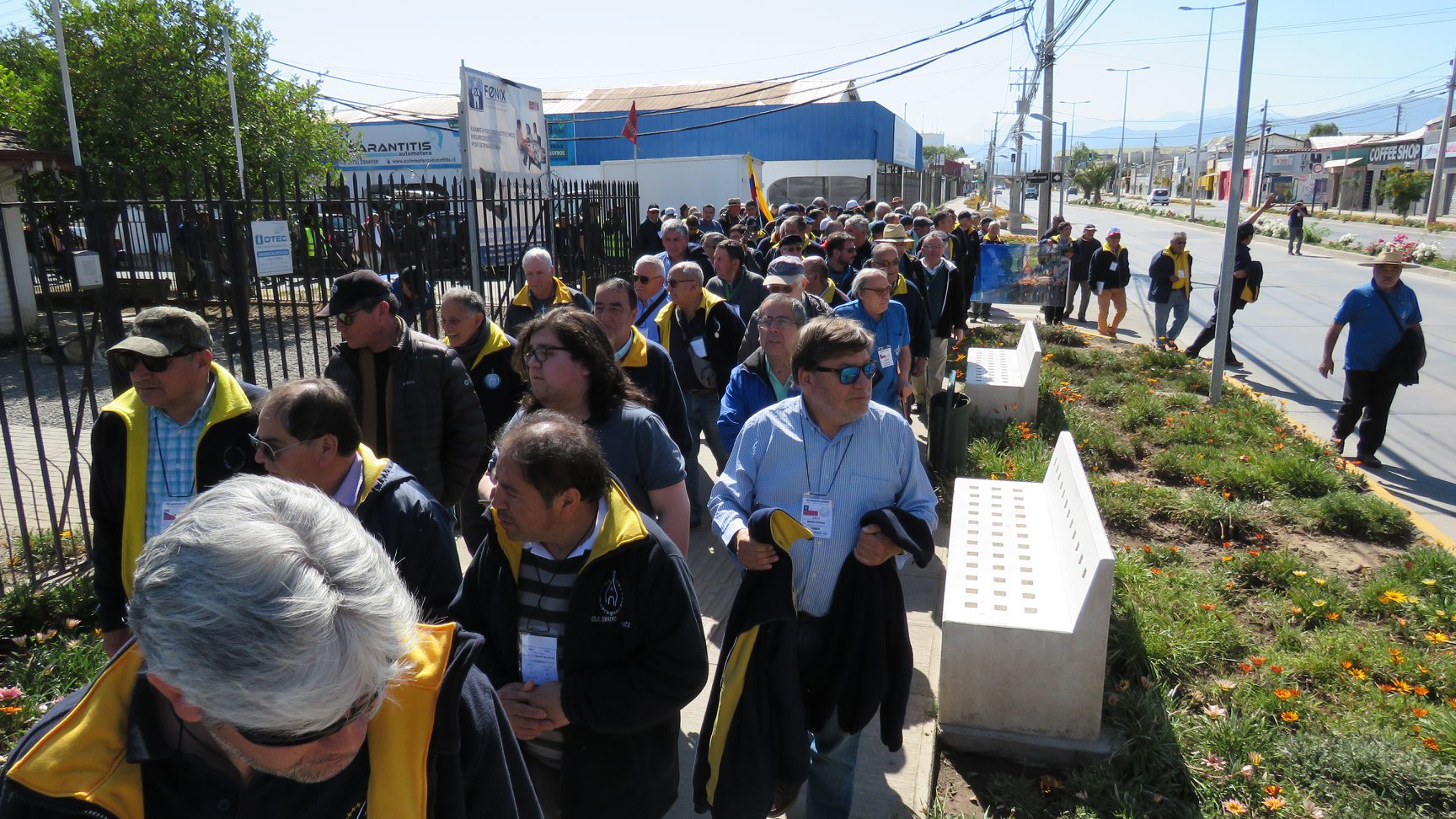 By car, bus, metro and plane from all over Chile and other countries

Some arrived by car, others by bus or subway. They were present on Friday at noon well prepared with plans and instructions and were received around the table, as is the case with this large family of brothers, as they are.

From here we want to pay special tribute to the Madrugadores from abroad who, despite the fact that many of them asked that they have not to travel according to their own confession, decided to do so in the confidence that God wanted them to. The contribution of all of them is always overwhelming with enthusiasm and contagious joy: Pura vida, pure life! as the Costa Ricans say. 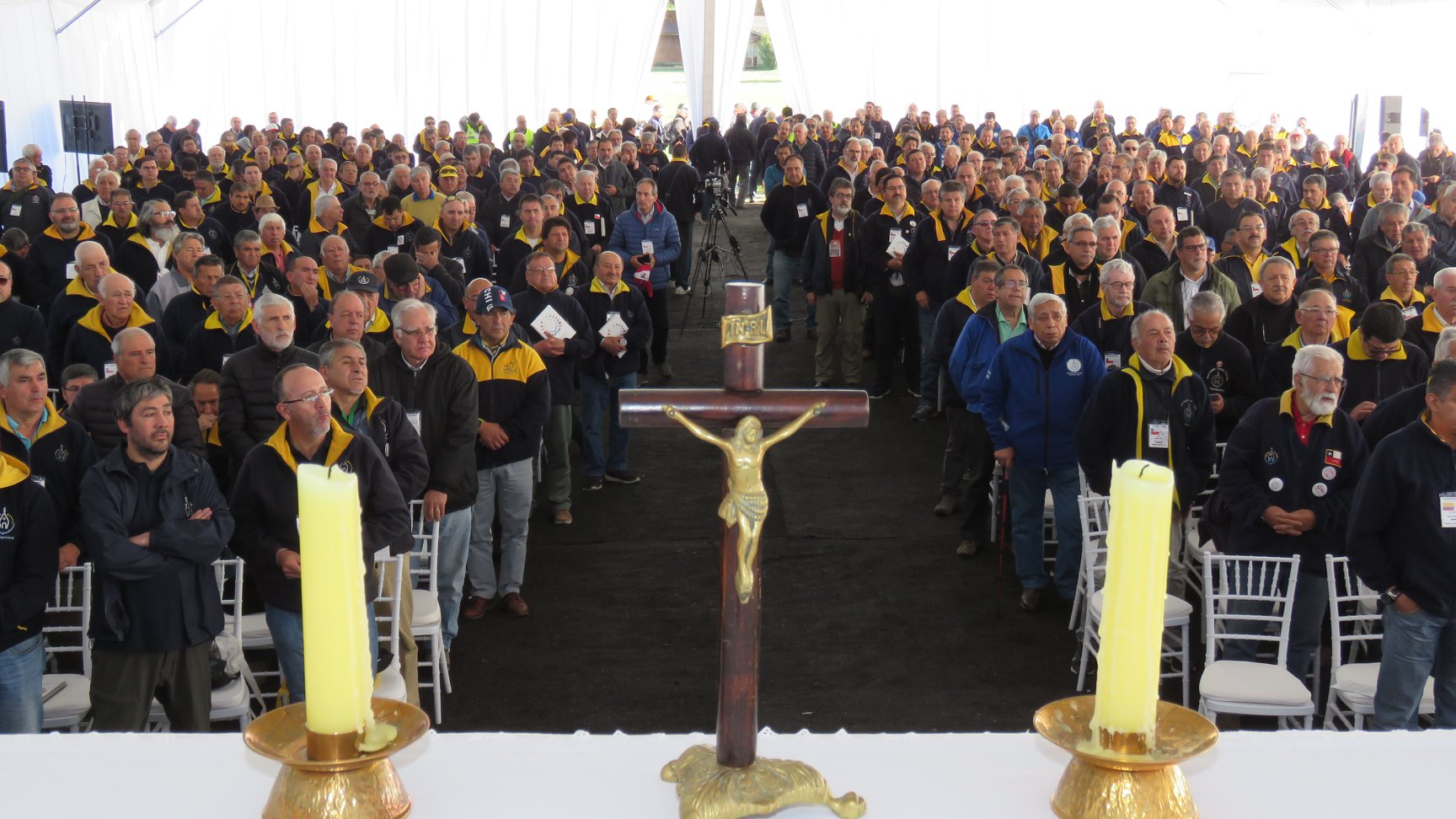 Be agents of change for society

The official activities began with an early morning Mass on Saturday led by Bishop Fernando Ramos, Apostolic Administrator and Bishop of Rancagua, who underlined in his message the great sign of hope for the Church that this current of life represents; that in spite of the difficult moments that Chile, its Church and other organizations are going through, the conviction of the Madrugadores, their fidelity and their decision to serve, gather us again and again in so many holy places to go out into the world to be witnesses of God’s love and agents of change in society. 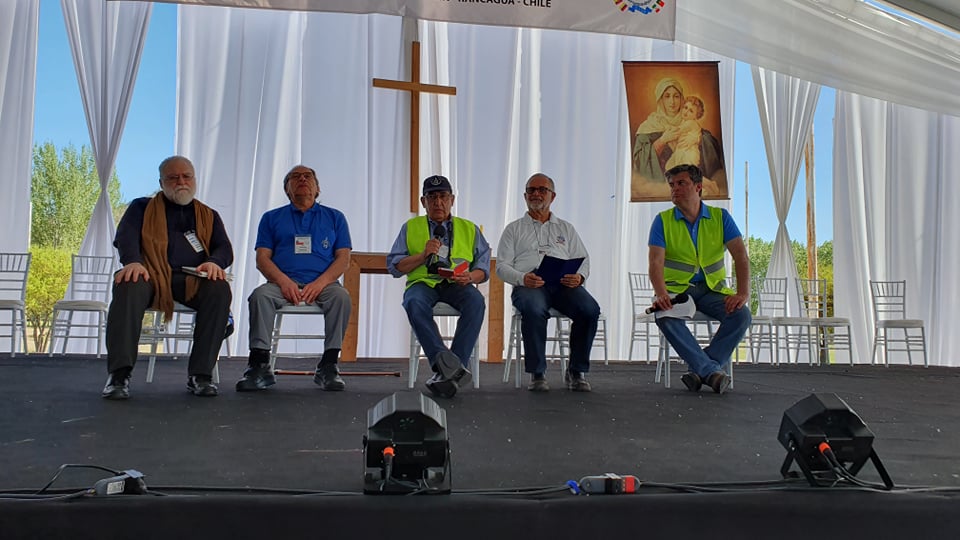 A new Church, faithful, profound, determined, diverse but united, the heart of society.

After the rich breakfast Octavio Galarce talked to us about his vision of Madrugadores based on their history. The change that takes place every ten years is obvious.

How from the simple meetings in the Shrine to the prayer in the early morning – the time was chosen not to disturb anyone – the current and community of the Madrugadores with more than 140 communities in Chile and another 150 communities in America and Europe has become. How the Schoenstatt Shrine of Rancagua, the place of origin, parishes, wayside shrines and other places of grace were conquered and became today the good of our Church.

What will the next 10 years bring? I personally believe that this kind of living faith will be the light at the end of the tunnel. It represents the new way of being a faithful, deep, determined, diverse but united Church, the heart of society. It will be the way in which our Lord can reach all kinds of families and realities. As Octavio has indicated, this is what the two weeks between two Madrugadas are for: to conquer the world. 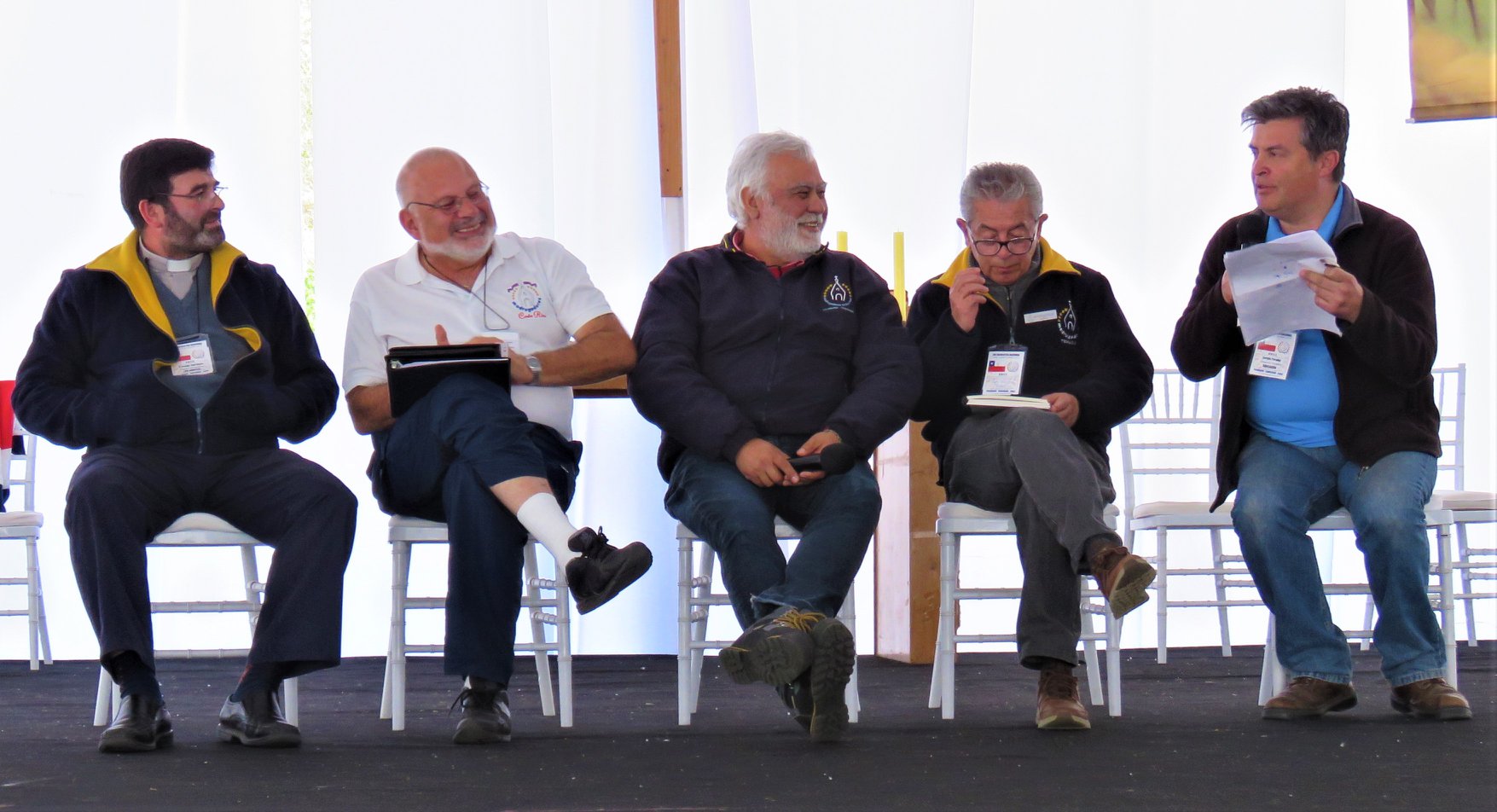 There were also two discussion forums based on testimonies of the experiences of the Madrugadores: the first was about what the Madrugada gave me; participants were Erwin Sánchez from the parish of San Juan Bautista in Temuco; Fr. Tomás Carrasco, pastor of the parish of the Holy Family of Los Angeles; Guillermo Plaza from La Serena-Coquimbo; and Carlos Alfaro, coordinator of the communities of Costa Rica.

After each discussion forum with brilliant presentations, there was a round for reflection; in total there were 72 groups of 8 Madrugadores each, in which what had been heard and the impressions it had left on each was broken down into the reality of the individual. With an exchange that brought experiences, interests and concerns to the fore. It was very interesting and formative to meet people from so many different backgrounds and experiences, to share their feelings about the issues raised – often much deeper than one might expect – and to see how each opinion or suggestion was welcomed with the utmost respect. 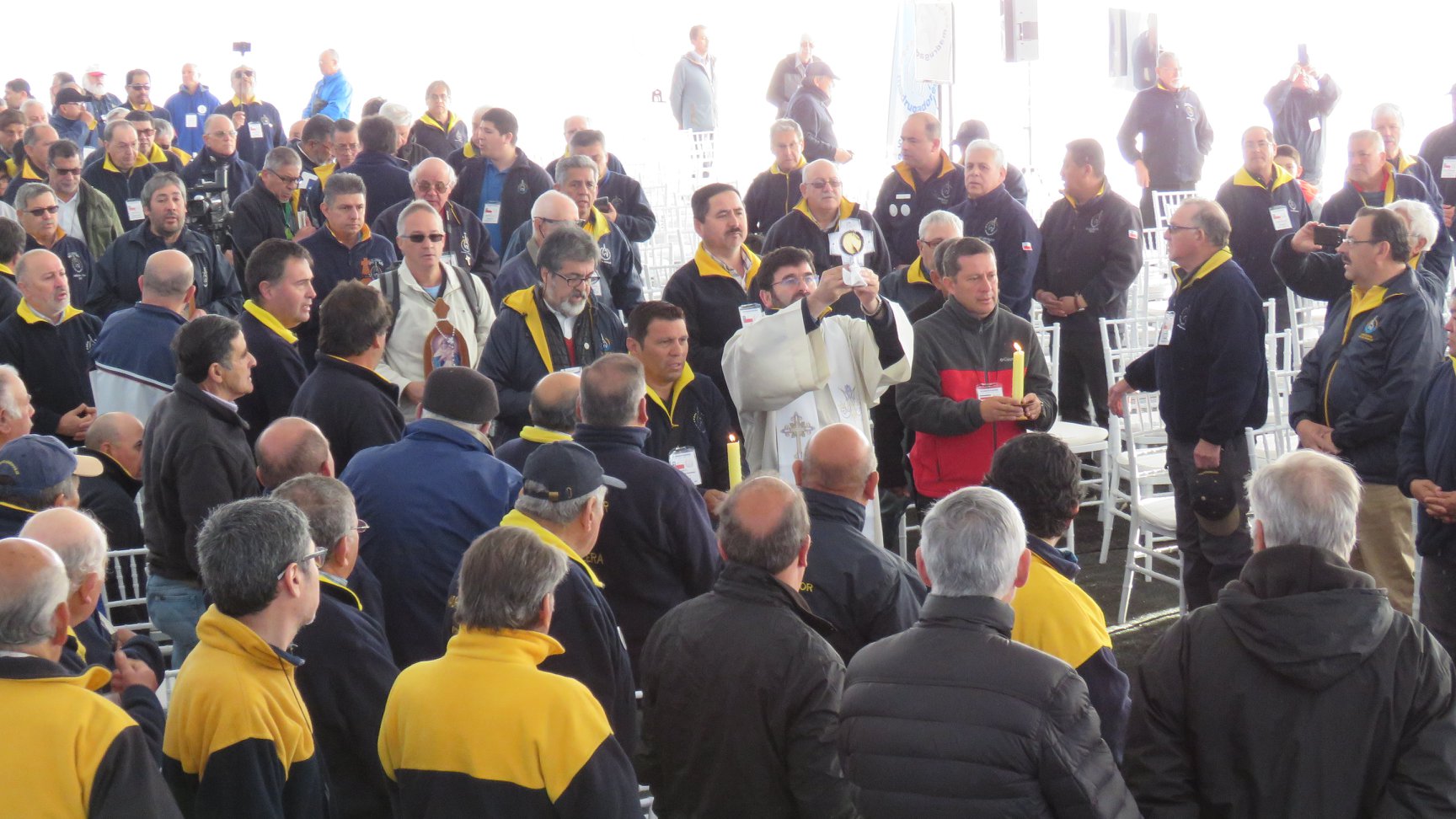 At the same time, from the beginning of Saturday Mass until Sunday morning prayer, a chapel was kept open for adoration of the Blessed Sacrament. For 24 hours each community stood before our Lord without interruption, for at least one hour, and laid its heart in His hands, with devotion and remembrance. With silence, rosary, songs, readings and even tears, God wanted to be personally close to each one of us. A great time of grace that undoubtedly changed the lives of those who experienced it.

And then the Star Parade on Saturday night. Saxophones, trumpets, guitars, choirs, drums, etc. were on stage. Some with nostalgic songs, others with songs of praise and still others simply with pure joy in joy. Different accents and charisms luckily manifested themselves for all of us who enjoyed so much grace and art performance.

Morning prayer at sunrise. With the adoration of the whole community and the warm words of Fr. Tomás Carrasco, a climate of great devotion was created. Little by little we opened our souls to praise our Lord and to recognize him in the events of our lives and history. 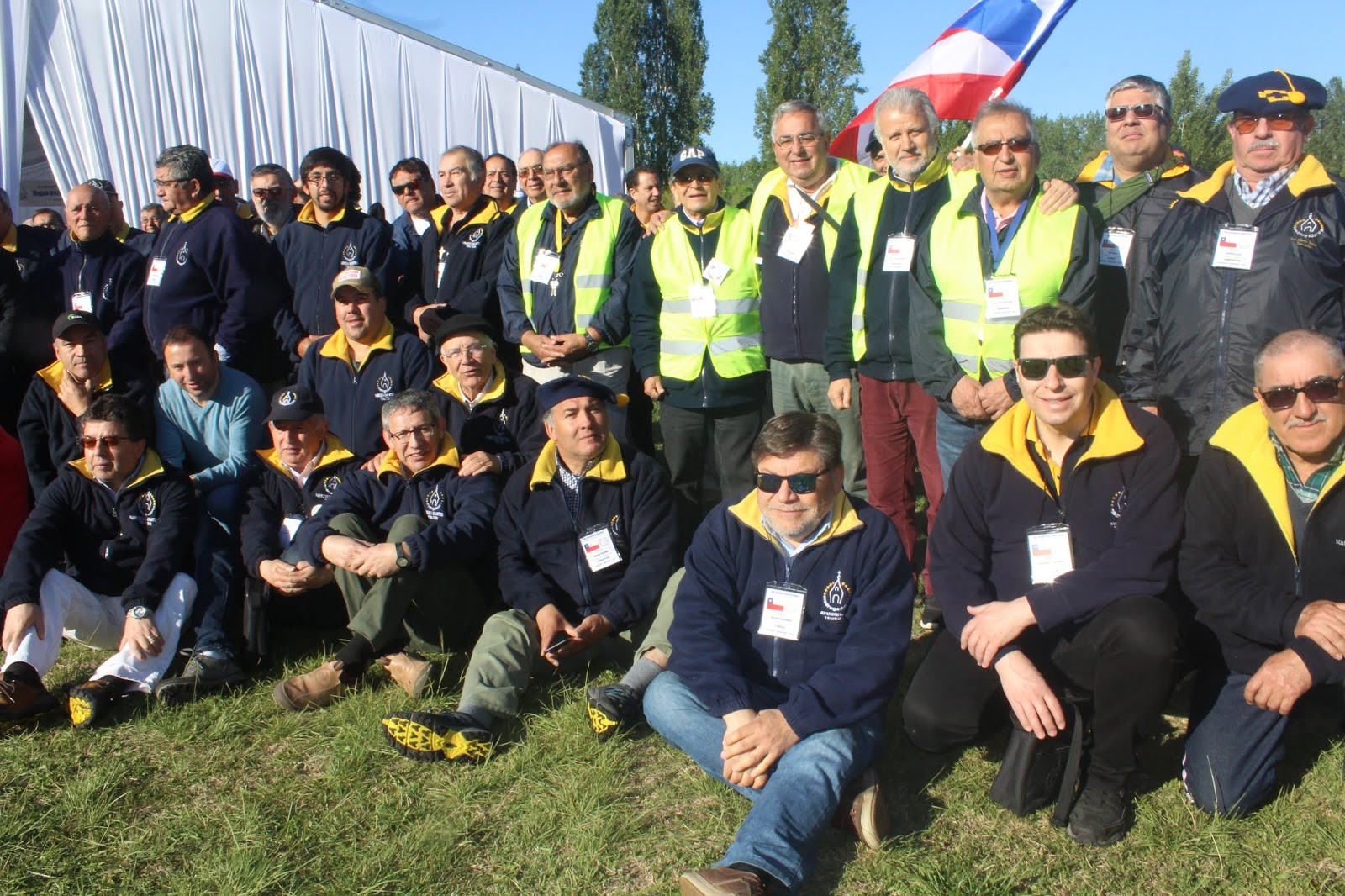 Pilgrimage to the place of origin

Then it was time to go on pilgrimage to the sanctuary of Rancagua, where it all began. We left Picarquin in 12 buses to get to know the site of the foundation. Father Carlos Cox led the celebration and was able to interweave what we felt in this encounter with what we experienced in the last 30 years in the shadow of the Shrine. It was moving and overwhelming. Once again, the flags and the songs were flying in the room. A great embrace of peace sealed this encounter. The community of Rancagua welcomed us with a fraternal breakfast to strengthen and savor this moment.

Back in Picarquín we celebrated a moving Mass with Father Juan Pablo Rovegno, the leader of the Movement. At the beginning he paid tribute to our women, represented by Patricia Collado, Octavio’s wife, to whom he presented a picture of the Virgin of La Candelaria thanking them for their unconditional accompaniment and support. A fine gesture on his part for those who make our life current possible and support us when our own strength falters. 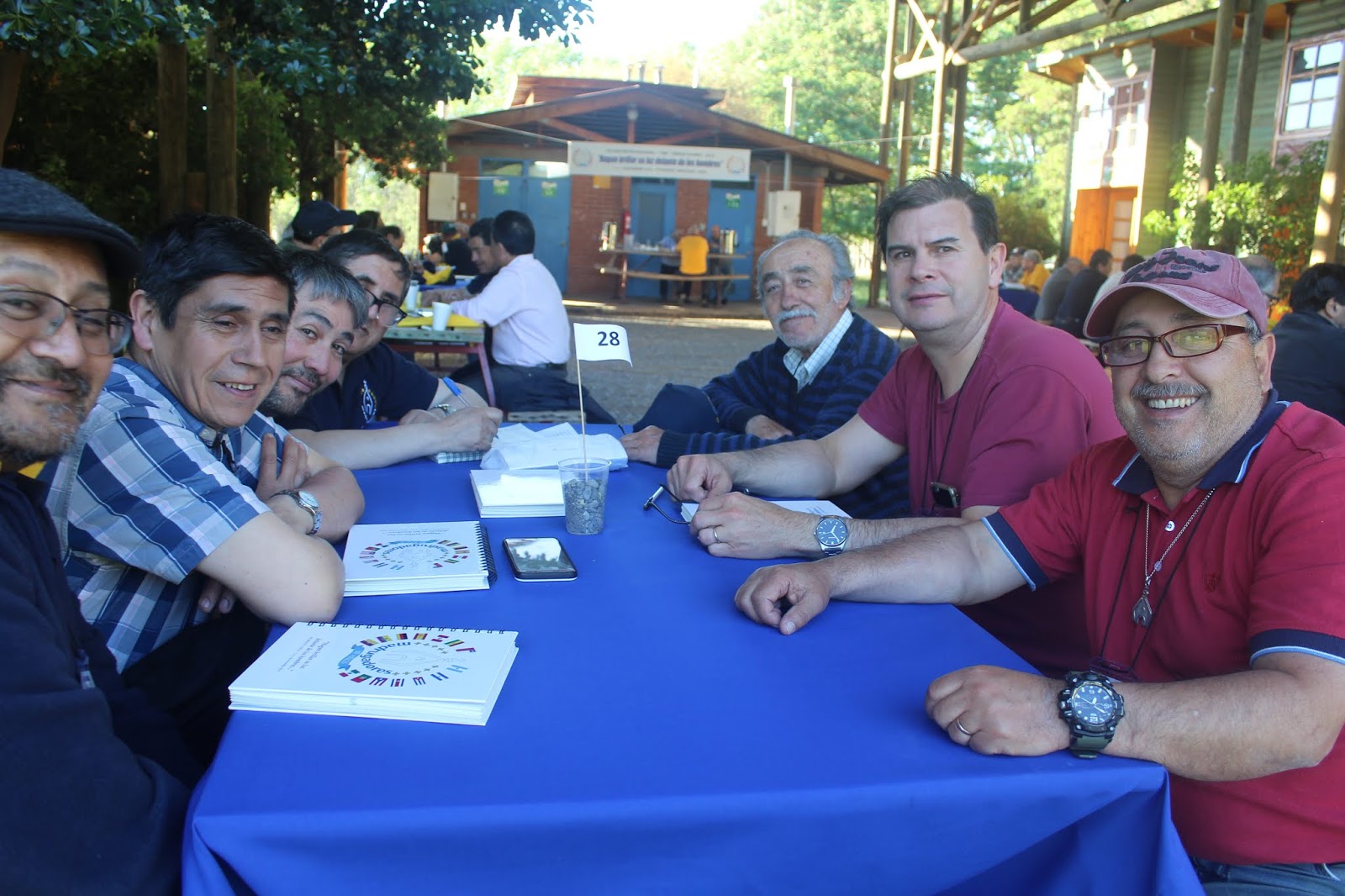 Transversal to all the activities of encounter, the music. The songs of the Choir of the Madrugadores from Puerto Montt not only accompanied every moment, but were also an admirable demonstration of talent and commitment. The musical quality of this group was excellent. If it’s true that singing is prayed twice, then it was certainly triple!

Not to mention the huge organization of the meeting. Everything was very well planned and prepared, from the previous communication to the smallest detail. The location was very well chosen. Time flew by as the spirit blew, without pressure from a too fixed agenda, but without inertia. Coffee was available everywhere and at any time, sometimes even with cookies, a nice gesture of the house. The food is also worth mentioning. Good, varied and abundant, well served.

Chile has woken up

They say the world has changed, Chile has woken up. In fact, in these three days we have seen that the differences of country, origin, profession or political inclination do not matter, but only what is most transcendent. If there is an awakening, I hope that it will be like what we have experienced, or as one of our songs says: “We, who were strangers, are brothers in Mary”. Because the most important thing is man and his reality and not just his own; because instead of hardening and destroying the heart, we all risk softening it and building a more fraternal, more communitarian country, a community that is practically a happy copy of Eden, a community of Mary. Hence Adsum, “Here I am, Lord”. 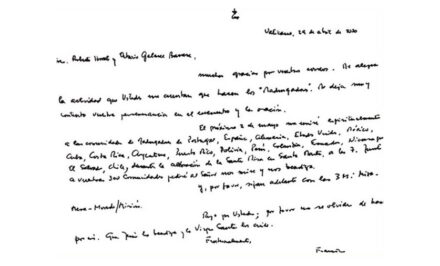 We Madrugadores have received a letter from Pope Francis! 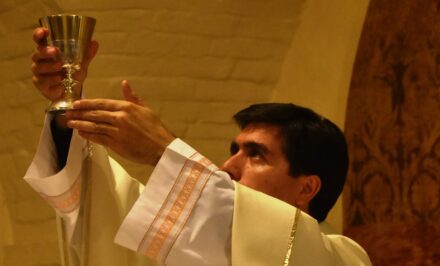 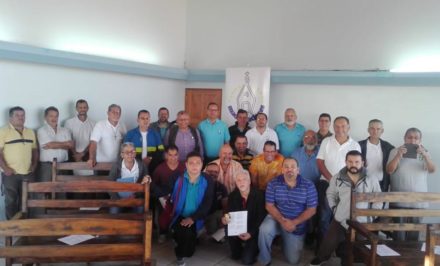 Twenty-one communities of Madrugadores in Costa Rica and counting!