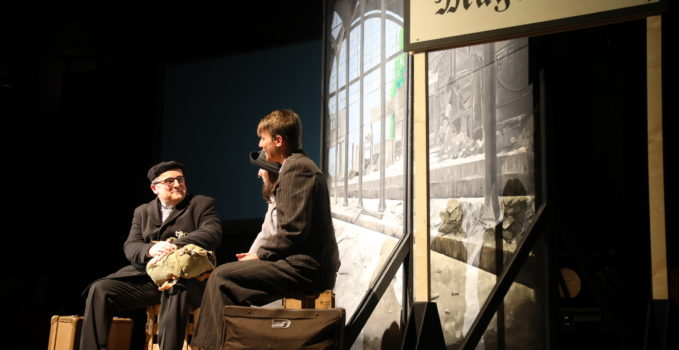 Uprightness Comes at a Cost

It is the story of a martyr that gets under your skin. Not just because of the varied and skilful music. But also and precisely because of the leading character, the Pallottine Father, Franz Reinisch. It is the story of the only priest who refused to take the oath of allegiance to Hitler during the Nazi period, and who was executed as a result. This is the subject of a musical “Dangerous”, but Wilfried Roehrig, lyricist, composer and producer.

On Saturday evening, 14 April, the premier took place in the Max Littmann Hall in Bad Kissingen, about one-and-a-half kilometres from the barracks where Reinisch refused to take the oath. More than seven hundred people were present. They were so caught up in the moment that they gave the final song and its encore a standing ovation, and the applause continued for a long time afterwards.

With very few props – some walls, wine cases that served as seating, walls or prison plank beds, and a central video screen – a large number of settings were created for two parallel levels of narrative. The framework for the action was the true incident of the secret transfer of Reinisch’s ashes from the Soviet occupation zone to Schoenstatt, the place that left a decisive mark on Reinisch’s spirituality. Fr Schwan, Reinisch’s confrere, met a young couple in Magdeburg who wanted to travel to the West, and engaged in a conversation with them. The couple wanted to know who exactly this Reinisch was for whom Schwan was risking his life by smuggling an urn with his ashes into the West without the necessary papers,. While they endured adversity, such as a raid by Russian soldiers, and secretly climbing into the coal tender of the locomotive travelling in the direction of freedom, the priest told the couple Reinisch’s story. 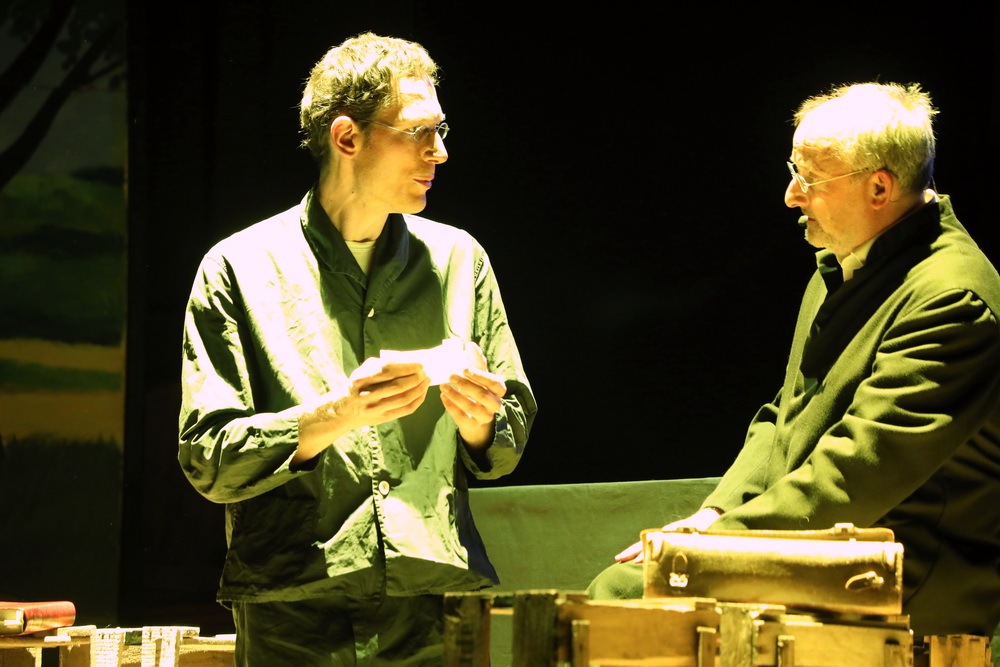 Mathias Gall played this role convincingly both vocally and as an actor. The forty people on stage and behind scenes staged a professional production. It was easy to forget that they were “only” ambitious amateur actors, dancers and singers. The instrumental parts, creatively arranged by Hans-Werner Scharnowski, had been recorded by famous artists from the German Christian Rock Music scene.

The real strength of the Reinisch musical showed in the twenty-three songs that underpinned the stage action. Sort of as an “introduction” Roehrig opened with the song “On the Rollercoaster” sung off-stage by Amin Jahn Sayed, with keywords like “demagogues”  and “renouncers without spine”, as well as “collective hyesteria”,relating it clearly to current “fake news” and certain brownish people supposedly saving the West.

What would I have done in Reinisch’s place?

The stark and uncontrived depiction of the facets of Reinisch, the person, was particularly attractive. As the young high-school graduate he danced for hours with his girl friend, Ludovika Linhard, brilliantly played by Carolin Ankenbauer. When Franz realised that he loved God more than Ludovika, he staked everything and became a priest, eventually joining the Pallottine Fathers. He quickly unmasked the Nazi ideology as God-less and destructive. The dancers staggered eerily like zombies across the stage; one song later the dancing individuals became a group of masked “clones” listening for the commands of the Fuhrer. Between the lines the question floats: What would the audience do in Reinisch’s place?

There are emotionally haunting scenes in which the priest explained before the Reich Court Martial his motives for refusing the oath to Hitler, or while he struggled in his prison cell to reach a decision in conscience. In the musical Franz Reinisch is above all attractive and authentic because he is not depicted as a super-hero, but as a questioner, a believer, who despite his weaknesses followed his path even to the guillotine. His source of strength was his relationship with God. Nevertheless he experienced the depths of fear and despair. “There is no freedom, love, uprightness without a cost”, Fr Schwan explains at the end of the journey. His final song: “What are we going to do with his ashes?” is more a mandate than a question. 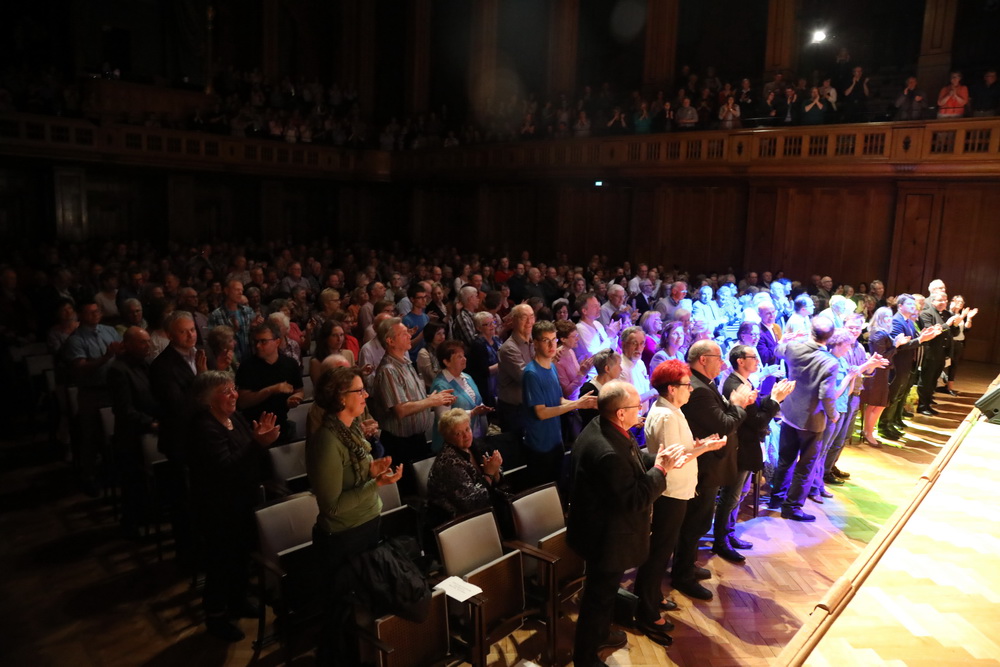 His message is for today

The regional parliamentary president, Barbara Stamm, as patroness, had offered the audience a very similar suggestion before the performance: “It will do us good to allow ourselves to be touched by Franz Reinisch’s message at a time when we are called upon to profess our faith in democracy, to protect people’s dignity and to stand up for values.”

A CD of the musical, along with its full score, has been published and can be obtained from www.rigma-shop.de. 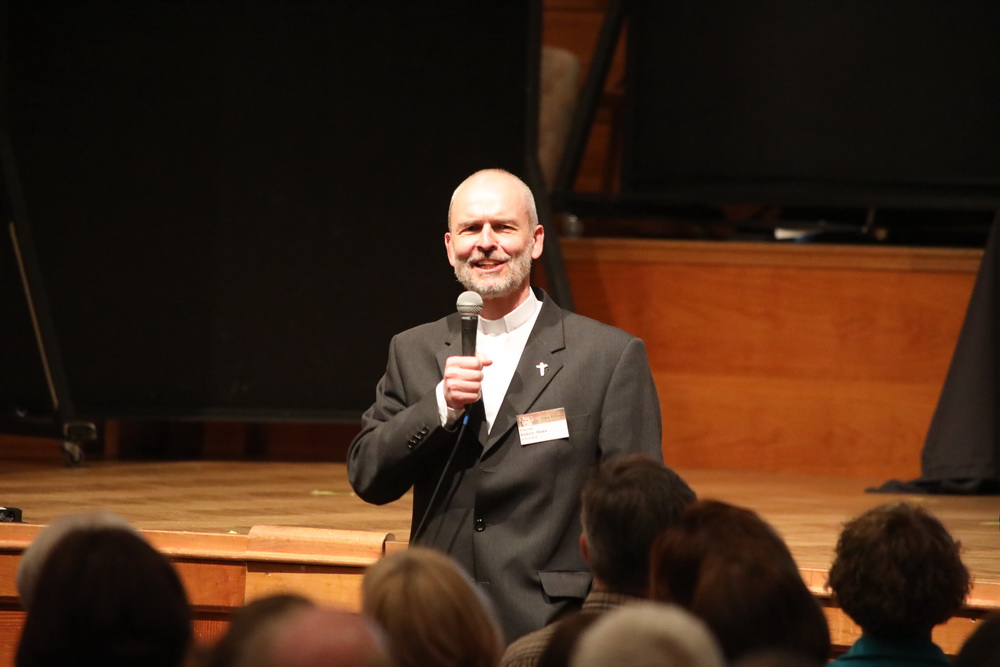 Franz Reinisch was born on 1 February 1903 in Feldkirch-Altenstadt, Austria. He grew up in Innsbruck. In 1922 he began to study law there. In 1923 he moved to Kiel in order to read medical jurisprudence. In July he returned home having decided to become a priest. He entered the seminary in Brixen in 1925, and on 29 June 1928 he was ordained to the priesthood in Innsbruck. That same year he entered the Pallottine Society in Untermerzbach in the Hassberge Hills. In 1930 he made his first profession and was appointed lecturer in philosophy. In 1933 he moved to Friedberg near Augsburg where became responsible for youth work from the Mother House of the Pallottine Province in Southern Germany. Through the periodical for priests, Sal Terrae, he made his first acquaintance with Schoenstatt. In 1934 he was spiritual director in Salzburg, but in 1935 he was transferred to Constance. There he fell ill with a kidney infection and was transferred to Hohenrechberg. In 1937 he was again transferred to Salzburg. In 1938 his community sent him to Schoenstatt. From there he worked throughout Germany conducting retreats, recollection days and conferences for the Schoenstatt Movement. In 1940 the Gestapo issued a gagging order. He received his call-up papers for the army and was ordered to report for duty on 14 April 1942. He deliberately arrived a day late. On 7 July 1942 he was condemned to death by the Reich Court Martial and was guillotined on 21 August 1942 in Brandenburg. His cause of beatification was opened in 2013.