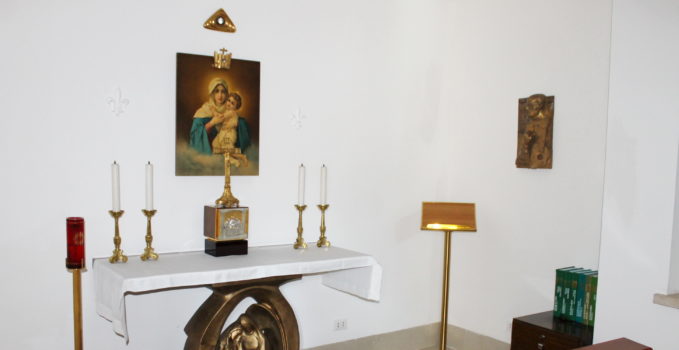 In Search of Karl Leisner – In Belmonte and Elsewhere “But that’s the same plaque we have in our shrine”, Fr Rolando Gibert Montes de Oca Valero, a member of the Priests’ Federation in Cuba and at present studying communication science in Rome, remarked at the end of the first meeting of the Pastoral Commission of Belmonte when the members of the Commission entered the newly completed chapel in the Casa dell’Alleanza. “In our shrine?” one of his Brazilian confreres asked him. “It is in our shrine on Mount Moriah in Schoenstatt.” “We have exactly the same plaque in our shrine at the Marienau in Schoenstatt.”

Well, he hasn’t yet been canonised, but he is the first Schoenstatter to be beatified. The two young Diocesan priests were both right. Together with three Sisters of Mary from Brazil, a Schoenstatt Father from Argentina, and the Rector, also from Brazil, they were praying in the Karl Leisner Chapel at the end of their discussions. Copies of the bronze plaque of Karl Leisner by Johannes Raphael Potzler can be found in the Canaan Patris Shrine of the Priests’ Federation, in the shrine on Mount Moriah, in the house chapel of Archbishop Emeritus Dr Robert Zollitsch in Freiburg, in the House of Encounter belonging to the Schoenstatt Centre in Mannheim-Gartenstadt, in the Schoenstatt shrine in Freiburg Merzhausen, in the Schoenstatt shrine in Stuttgart-Freiberg, in the Karl Leisner Community Centre in Flandrischen Strasse 11 in Kleve (Karl Leisner’s family home), in the shrine in Muenster-Gievenbeck, and also in the International Schoenstatt Centre in Belmonte, Rome.

Two weeks before this, Christa Bockkholt of the international Karl Leisner Circle complied a summary of all the memorials connected with devotion to Karl Leisner.

She wrote to the email address she found on the web page of the International Schoenstatt Centre in Belmonte, Rome: “At present I am compiling information for the internet page of the International Karl Leisner Circle (IKLK) about the various ways Blessed Karl Leisner is honoured. Contributions on this subject will gradually appear on the home page of the IKLK. Among the signs of devotion is the Karl Leisner plaque by Johannes Potzler. The first casting of this plaque was made for the Uniti Patri Course [of the Schoenstatt Fathers] and hangs in the shrine of the Schoenstatt priests on Berg Moriah in Simmern.” She went on to mention the places listed above where this sculpture can be found and which she had visited in order to take photos and gather information. “The sixth casting of this plaque was intended for the International Schoenstatt Centre in Belmonte, Rome. Since I cannot see when I will travel to Rome one day, I would like to know whether and where the plaque has been placed in your Centre, and perhaps who donated it. I am most grateful for every information. If you could email me a photo of it that I can publish, and even one of your Centre, I would be most grateful. …”

Fr Marcelo Cervi, the Rector, immediately made enquiries which not only located this plaque, … but also a number of other treasures we had lost sight of during the long time of construction and the many changes of staff in Belmonte. In the end this led to furnishing the chapel dedicated to Karl Leisner in the Casa del’Alleanza. Now that three rooms in the Domus Pater Kentenich have been dedicated to three outstanding Schoenstatt personalities  – Franz Reinisch, Gertraud von Bullion and Joao Pozzobon – this chapel offers a place to a young priest who lived the covenant of love deeply and with great joy in order to lead many, especially youth, to an encounter with Christ, his great passion. 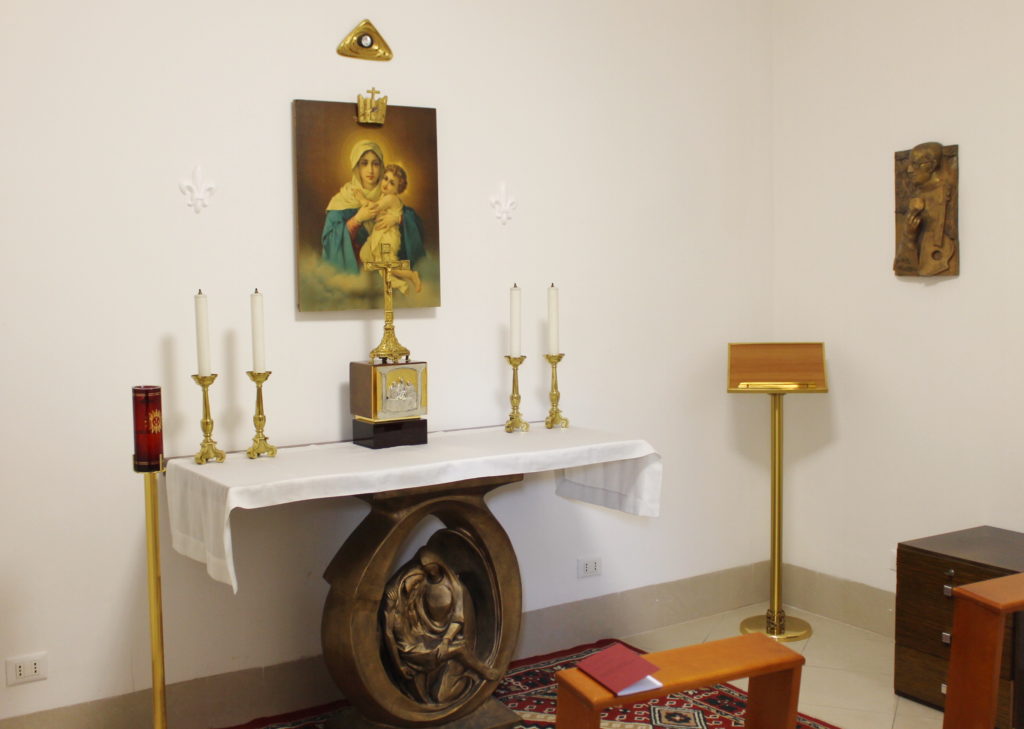 Since 21 February the following has been available on the web page of the International Karl Leisner Circle:

In the meantime an oratory, as a Karl Leisner chapel, has been furnished in a house next-door. The relief can be found on the right hand side inside the chapel. This is the sixth casting of the bronze relief donated by the Uniti Patris Course of Schoenstatt Fathers for the shrine of the Schoenstatt priests on Mount Moriah, Simmern, and it has been there since April 1997.

The sculpture shows the upper body of Karl Leisner and the inscription “VICTOR IN VINCULIS”, Karl’s birth year 1915 and death in 1945, along with the symbols of barbed wire, guitar and the Eucharist, and an empty page with Karl Leisner’s signature sybolising his Blank Cheque.

The Schoenstatt group in Dachau concentration camp led by Heinz Dresbach, and later Hermann Richarz, to which Karl Leisner belonged, began searching for its group ideal during Lent in 1944. It decided in favour of Robert Pruszkowski’s suggestion “Victor in vinculis (Mariae)”. The search for the ideal was strongly inspired by the spirituality of Marian Instrumentality about which Fr Joseph Kentenich SAC had dictated a study in Spring 1944. It concerns attachment to Mary in the sense of being her instrument, and of being part of a network. Mary symbolises the Triune God.

In the Dachau Concentration Camp Fr Markarius Spitzig OSB carved a bishop’s crosier with the coat of arms of Bishop Gabriel Piguet and the inscription Victor in Vinculis.

The barbed wire stands for the five-and-a-half years Karl Leisner was a prisoner, and his suffering on account of pulmonary TB, of which he died on 12 August 1945.

The guitar may surprise people, but it indicates the joyful nature and positive thinking and actions of Karl Leisner. He not only aroused the enthusiasm of the youth with his guitar, but also his fellow prisoners in the concentration camp. On 9 March 1941 he asked for his guitar to be sent to the concentration camp. He later acknowledged the arrival of the guitar and said that it made him and his comrades happy. On 18 October 1941 he wrote to his family, “This evening we played the guitar and sang. Hey ho!”

In the December 1997 issue of the Schoenstatt periodical “basis” Fr Georg Egle wrote about the Host: “It is impossible to miss the host on the relief, which Karl Leisner is holding in his right hand. It speaks of his love for Christ, his youthful passion and priestly self-surrender to Jesus Christ. As a deacon, Karl risked his life to bring Holy Communion to the sick prisoners. He is the only prisoner who was ordained to the priesthood in a Nazi concentration camp. He celebrated his first and only Holy Mass there.”

Fr Egle wrote about his Blank Cheque: “On the left is a sheet of paper signed by Karl Leisner. Together with the members of his group of theology students at Muenster in 1939 Karl freely placed his life at the service of the Blessed Mother to do with it what she willed. He lived this willingness in prison and the concentration camp.”

It is probable that the Schoenstatters among the deacons, of whom Karl was one, prayed this consecration prayer after their ordination to the diaconate:

Dear Mother Thrice Admirable of Schoenstatt, the 1939 Muenster Course thanks you for its calling to the priesthood and the Federation. In gratitude we give you power and authority over us; do with us what you will and how you will. Send us from the altar into everyday life and let us live according to the law: Sacerdotem oportet offerre.

Karl Leisner was particularly attached to the Pope, the supreme pontiff in Rome. His respect for this office, and for Pius XI and later Pius XII, is reflected in his diary. He got to know Rome in 1936 during a pilgrimage from 22 May to 8 June with his fellow students, Josef Koeckemann and Max Terhorst. The climax of this journey was their private audience with Pope Pius XI. His death on 10 February 1939, and the election of his successor, Eugenio Pacelli as Pope Pius XII, moved him very deeply.

Karl Leisner was in Rome … in the city of the Holy Father. He is in Rome. So are we. 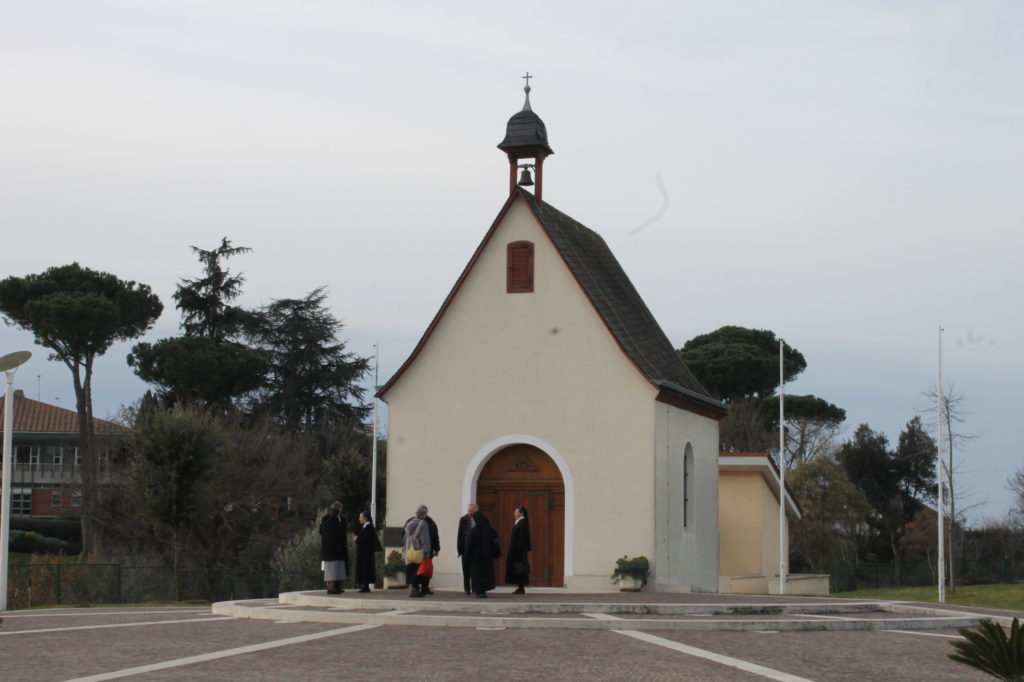