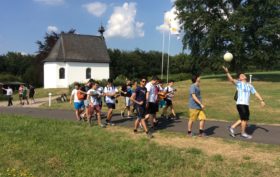 ORIGINAL SHRINE, Ruben Elizondo • It has been six days[1] since we officially started the International School of Leaders 2018 that started 10 July. Twenty Schoenstatt college-age young men comprise the school: four from Mexico, Chile, and Argentina, and two from the United States, Costa Rica, Brazil, and Spain. — The goal and mission of the International School of Leaders is for us to deepen our formation in Schoenstatt with a strong emphasis on how to be leaders for the Movement, the Church, and the world. Learning about everyday sanctityRead More 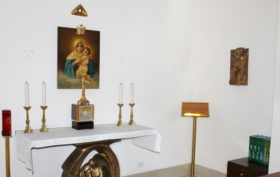 In Search of Karl Leisner – In Belmonte and Elsewhere

GERMANY/ ROME BELMONTE, Maria Fischer • “But that’s the same plaque we have in our shrine”, Fr Rolando Gibert Montes de Oca Valero, a member of the Priests’ Federation in Cuba and at present studying communication science in Rome, remarked at the end of the first meeting of the Pastoral Commission of Belmonte when the members of the Commission entered the newly completed chapel in the Casa dell’Alleanza. “In our shrine?” one of his Brazilian confreres asked him. “It is in our shrine on Mount Moriah in Schoenstatt.” “We haveRead More