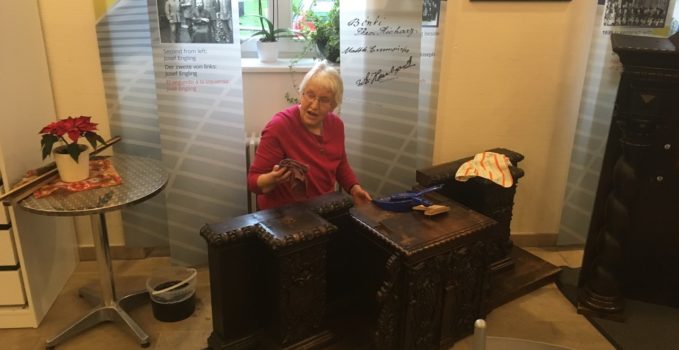 My Testimony of the Refurbishment of the Original Shrine

The renovation and refurbishments of the Original Shrine has been long in the planning. Ten years ago Agathe Hug, a busy gynaecologist, felt the need to “visit” the Original Shrine via her computer, as is possible at other places of grace and pilgrimage, and so was born the idea to have a webcam in the Original Shrine. Since then she and her family have brought schoenstatt-tv into existence.

At first it was controversial, but the various jubilees and other celebrations have proved its worth, and it is now a fixture in the Schoenstatt scene, even going overseas to broadcast important events. The initial webcam was short lived, because the shrine is in a deep valley and it is very difficult to broadcast live from it. For a long time the connection has been via smartphones! Meanwhile a cable connection has reached the sacristy opposite the shrine and all that remained was to connect the shrine to the sacristy. Easier said than done.

I had to good fortune to be visiting Agathe Hug and her niece over Christmas, and got the start of the renovation work. On 9 January immediately after the 8 a.m. Mass on in the Original Shrine willing hands appeared from all directions to begin the work of emptying the shrine. The pews were taken to the schoenstatt-tv studio in the Covenant House to be refurbished by a Brother of Mary and the altar table was taken to the workshop of the Brothers of Mary. The various symbols were fetched by the communities that had donated them and taken to be spruced up. For the light frame around the MTA picture this has meant a big repair job as well, which was done by the Goldsmiths of the Brothers of Mary nearby. They also refurbished the tabernacle. The MTA picture was taken to a professional art restorer in Koblenz. I had the privilege of sitting next to the picture and ensuring its safety on the way. However, my main contribution was “house sitting” to receive deliveries and heat up the lunch for the workers. This freed the younger members of the team for more active service. This was ongoing, because as the work progressed, the more problems were discovered and had to be addressed, and more equipment had to be ordered.

One of the first major works once the shrine was empty was to dig a trench for the cables that join the shrine to the sacristy. I was amazed by the size and complexity of these cables, as I am sure you will be as well. A trench was also dug round the shrine so that cables could be laid to a point near the Heroes’ Graves so that outside events could more easily be filmed and broadcast, and so that microphones could also be set up there.

Major re-wiring was also undertaken in the attic of the shrine. The workers found that there were already cables everywhere, but had no idea what they were for, so that was the first operation. Then the new cables were laid for better lighting and loudspeaker systems. I, for one, found that my hearing aids could not pick up the quiet voice of the celebrants at Mass or their sermons. It is also necessary for the webcam to be able to pick up what is said and sung at celebrations when required. The hanging lights had to be removed, because they got in the way of the webcam and could burn the lens, “killing” the webcam.  In addition, some of the lights need to be dimmable.  The rewiring meant that the walls had to be opened so that the cables could be joined to the mains, etc. Here the workers uncovered cables from previous operations that seemed to come from nowhere and go nowhere. It made life difficult! Place had also to be created for the many cables joining the shrine and sacristy. A major consideration was not to change the interior of the shrine in any visible way. 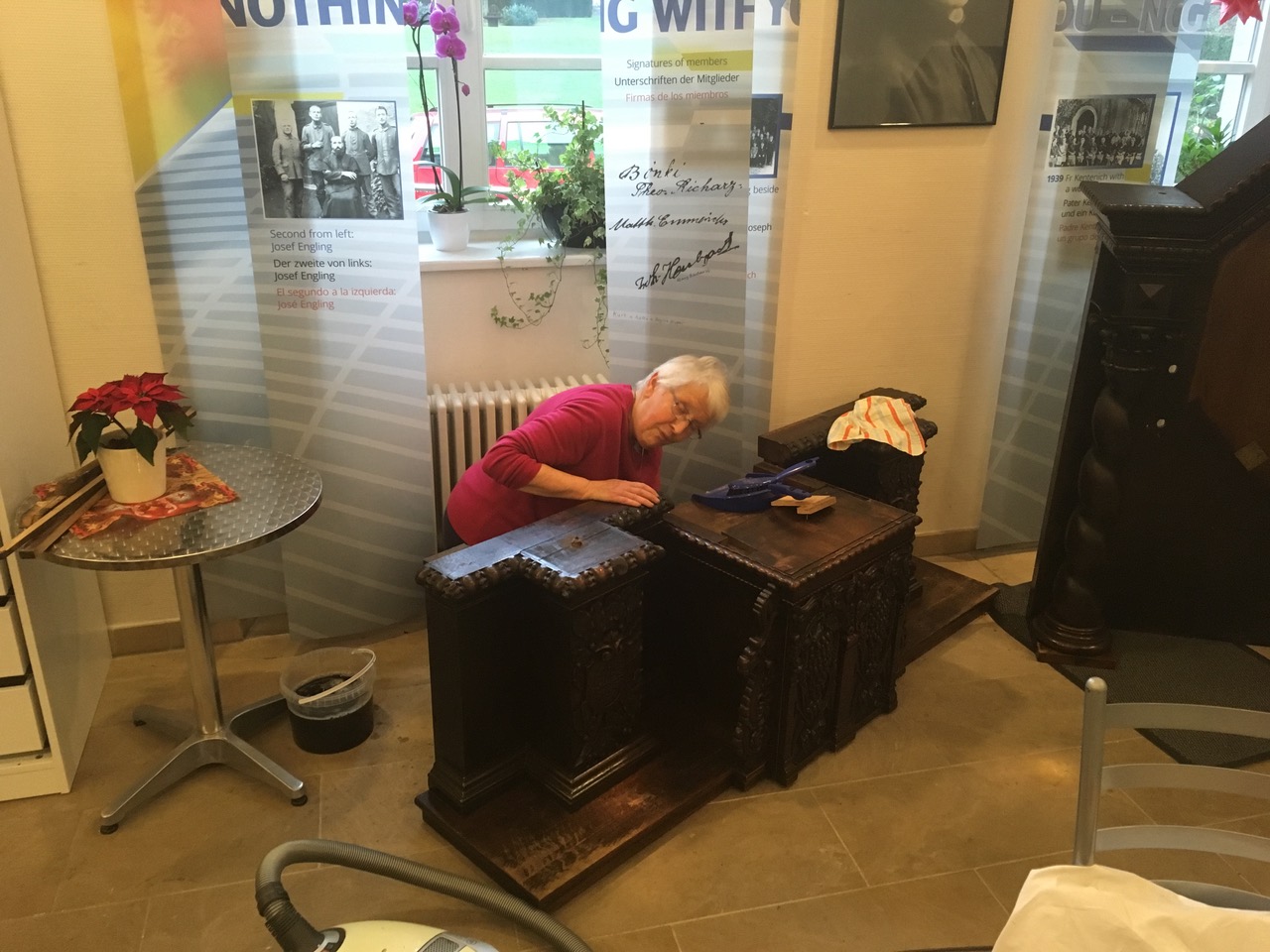 One Saturday I was asked if I would like to clean the altar – the carved, baroque altar – which was in pieces in the sacristy. Damp dusting was called for, and in no time my hands, the cloth and the water had turned black from decades of candle smoke. The polishing and refurbishment would take place afterwards. I prayed for all who were in any way connected in the covenant of love. Behind the place where the picture fits in there are many names, and I added mine with the intention of including anyone who has touched my life in the covenant.

No work was done on Sunday, when the workers had a well-earned rest, although there were never-ending discussions of the next steps that had to be taken and how to solve the problems that had arisen. One problem that was looming was a drop in the temperature, because if it got too cold, it would be impossible to close the trench properly. Unfortunately this has happened, and that work will delay the completion of the project. However, as the photos reveal, the shrine is now back to its former glory.

It is an open question when we will be able to visit the Original Shrine via the internet. (We have long been able to visit it from outside.) So please keep logging in (at Schoenstatt TV).  The team has worked incredibly hard to get everything so far, and I am sure we will want to thank them with our prayers. Most of the work has been done on a voluntary basis to keep costs down as far as possible, but there is still a major financial “hole” that needs to be filled. All that technology is very expensive. For those who feel they want to make a contribution to our Mother’s financial capital, here are the details. Even the “widow’s mite” is more than welcome. It is a sign of our love and gratitude. 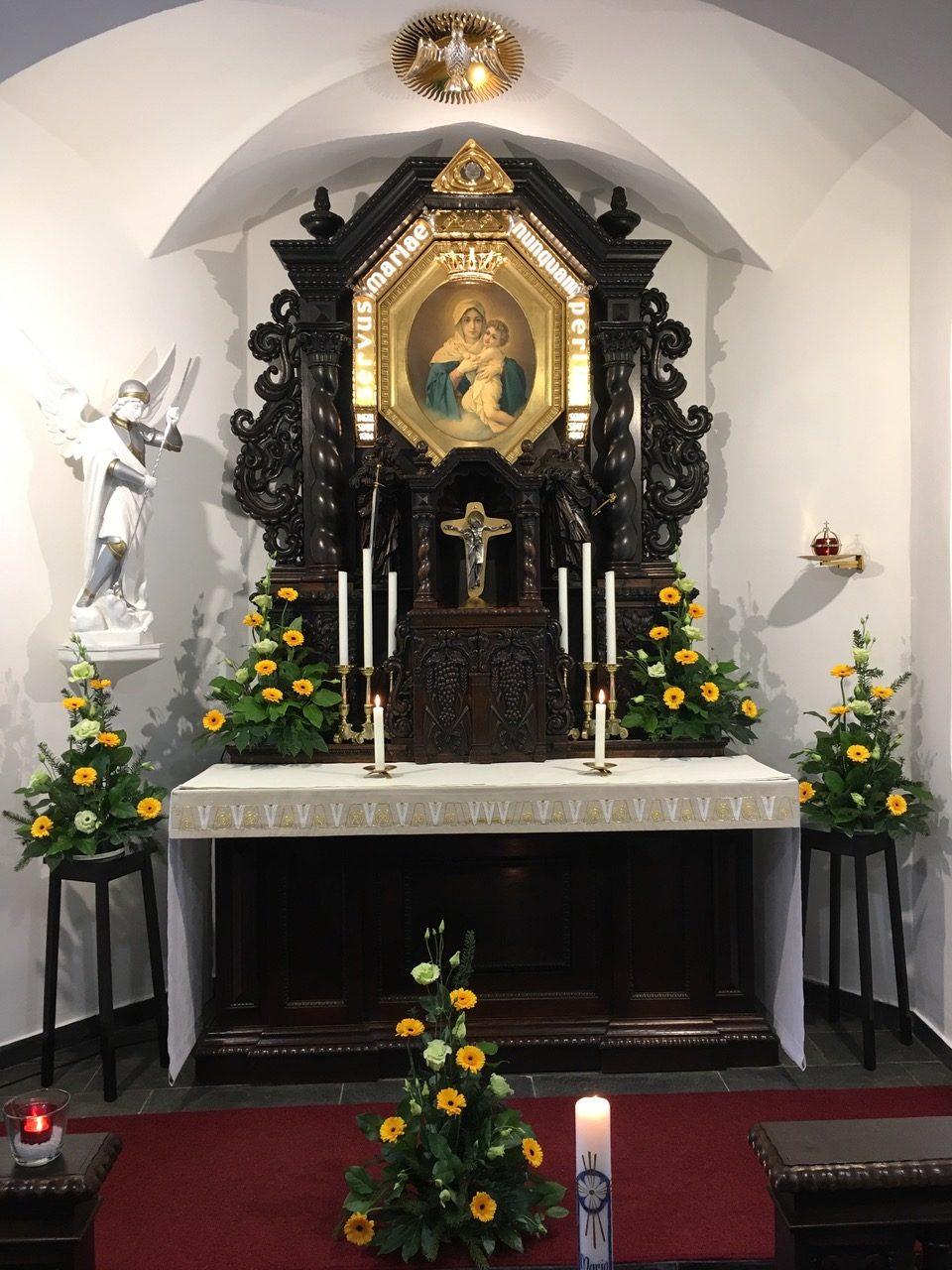