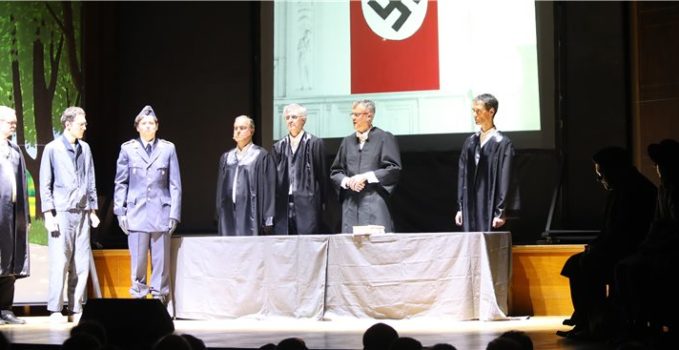 “As a Christian and Austrian I can never swear the oath of loyalty to a man like Hitler.”

“As a Christian and Austrian I can never swear the oath of loyalty to a man like Hitler.” Fr Reinisch remained true to his conviction, but he paid for it with his life. The decision in conscience and development of this priest, who was guillotined in 1942 at the age of 39, are the subject of this musical, which will be performed on Sunday, 16 June at 5 p.m. in the Congress Centre in Erfurt. “Dangerous: Franz Reinisch. Musical about an Upright Man.” Erfurt is the seventh and last stop on a tour that has taken the caste and band through Austria and Germany. The patron of the Erfurt production is the representative of the Federal Government for the new federal states, State Secretary Christian Hirte. —

The musical is the initiative of the Schoenstatt Movement, one of the ecclesial communities that was founded in the 20th century as part of the Pallottine Society. Franz Reinisch, who came from Feldkirch, Austria, also belonged to this religious community. From 1938 he worked on behalf of the Schoenstatt Movement in the pastorate for men. The talented priest appealed in particular to the youth. Since, however, he made it clear in what he said that the Christian faith could never be reconciled with the Nazi ideology, he rapidly came to the notice of the Gestapo, and in 1940 he was forbidden to preach or speak in public.

The musical also relates the framework to the events at Easter 1946. Franz Reinisch had been executed four years before in Brandenburg on account of undermining army morale, because, after he was conscripted to the army, he refused to take the oath of loyalty to Adolf Hitler. A confrere attempted to bring the urn with his ashes into the West across the interzonal borders of the occupation. His aim was to bury Franz’s mortal remains in Vallendar at the place of foundation of the Schoenstatt Movement. The musical is based on historical facts. During the train journey in 1946 the priest talked to a young man. In the musical this is portrayed as a couple to whom he relates the exciting history of Franz Reinisch – his turbulent youth, his search for his calling, his protest against the Nazi dictatorship and its hangers-on, and finally his conflict with the authorities that came to a head in his death. Franz Reinisch was a man who stood to his conscience and his faith in God until the end.

Also a message in view of growing populism and nationalism

The composer and author of the musical “Dangerous” is Wilfried Röhrig, who has already published many Christian pop songs, light operas and musicals. What fascinated him in Franz Reinisch was that he was not a “pious high flyer”, or even “a super saint”, but “a person like you and me, with rough edges, with goals and expectations, but also weaknesses and limitations”. Röhrig was not interested in relating a story from the distant past. “The more deeply I entered into the history of his life, the more I realised that much of it had to do with me, with us, with our lives and our world today.”

Röhrig was thinking about questions such as “standing tall”, dealing with convictions and taking the consequences for them, or with the faith, politics and social developments. So they are serious topics that have to be fitted into the colourful world of a musical, with its chorus, solos and dance interludes. It wasn’t a problem for Wilfried Röhrig: Even in a musical “the whole of life has to appear on the stage”, he remarked.

Even dark periods, such as the history of the Third Reich, have their place in it. “They aren’t examined in an academic and objective way, but related through songs, music and dance to our world, to our times and their challenges”, Röhrig said. He was thinking of the current populism and nationalism that seem to be spreading everywhere today.

For the promoter, therefore, this musical combines both a challenge and entertainment.