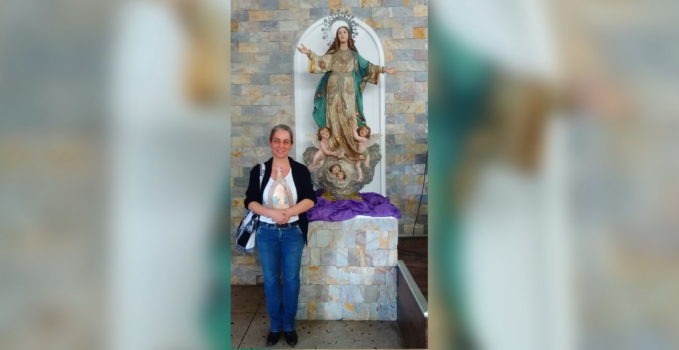 “Here in Venezuela, I have never seen anything about this picture and I would like to take her on mission” 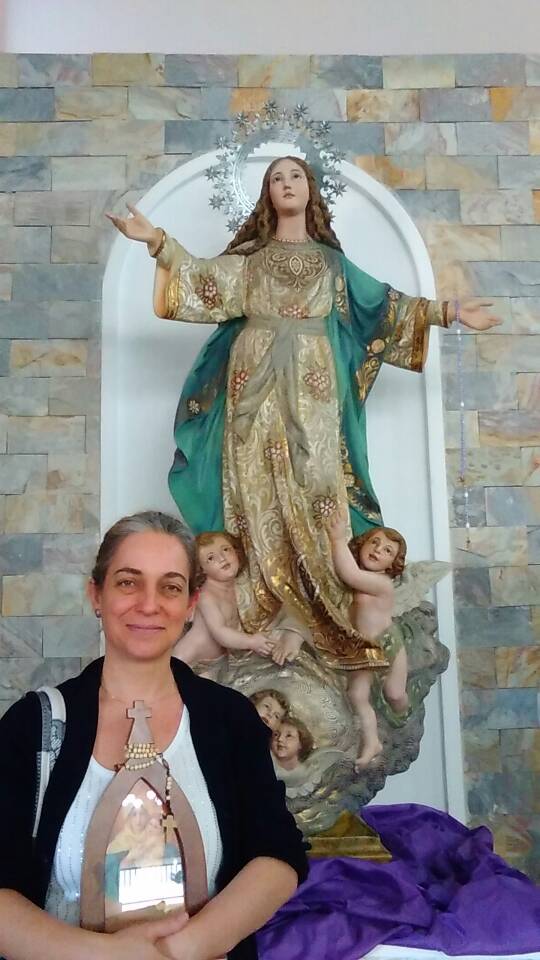 “Good day! My name is Xiomara; I live in Valencia, Venezuela.  I would like to know if there is a Pilgrim Mother in this city, or if it is possible to have one. I have known about this title for several years. Some friends from Spain introduced her to me through a Whatsapp prayer group, and since then I have identified myself with her. Recently a sister-in-law gave me a medal brought from Argentina, but here in Venezuela I have never seen this picture of the Blessed Mother. Thank you.” —

Venezuela, Spain, Argentina, Whatsapp, schoenstatt.org, a 16-year-old boy and his testimony: all of this so she can go where she wants to go, in this case Valencia, Venezuela. The Blessed Mother, the restless Schoenstatt Pilgrim Mother, seems to know how to use all forms of social media to take her son to the people.

If she wants to come to Valencia, she will arrive

It all began on the 9 January 2018, when Xiomara Moro wrote this comment in the article “The restless Blessed Mother is already on pilgrimage through homes in Barquisimeto” an article by Daniel Rodríguez, a 16-year-old from Barquisimeto, Venezuela, that was published on schoenstatt.org in November 2017.

Once again, the strength of “connecting Schoenstatters” was set in motion: “It is good that we can communicate through our website! The truth is that we do not have concrete information about where the Pilgrim Mother is in Venezuela, but – if you want to be a missionary and take her to the people who need her, we are here to help in every way, just like we did with Daniel, with Concepción, and with Deacon Alberto Badaracco in their cities. There is a generous person in Argentina who has assumed the task of sending a Pilgrim Mother along with preparation materials, and she gives a helping hand with everything…”

This request was forwarded to that generous person in Argentina by the name of Mercedes MacDonough, a missionary of the Rosary Campaign of the Pilgrim Mother, who in the midst of vacation season, prepared everything, sent a Pilgrim Mother to Valencia, and on the same day, sent a second one to Barquisimeto. On 23 February, Xiomara related with enormous joy: “Thanks to God, the Blessed Mother and you, I already have received the Pilgrim Mother, which was assigned to me, in my hands! She is beautiful! I feel immensely blessed! I am going to read all the material that accompanied her, and I will organize whatever is necessary so she can begin her mission!”

She began her pilgrimage 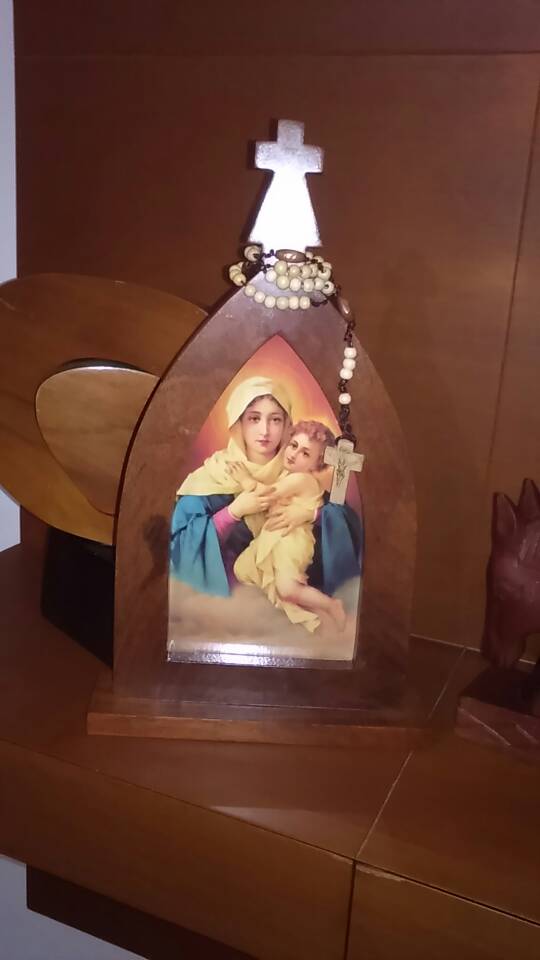 On 27 February, Xiomara wrote: “I want to say that it is wonderful to have the Pilgrim Mother with us. Sunday I took her to my parish, where it was blessed once again by the vicar. Soon I will introduce her to my pastor, since he is on a trip at this time.

Everyone who saw the Pilgrim Mother fell in love with her. Some already know her; others do not. On Monday, we had a visit to my children’s school. We pray the Rosary every night in our home.

I want to take her punctually to visit several places before taking her to other families, and among other activities, we organized a Rosary with family and friends, so that she can be known and honored.”

An air of internationality, an air of graces of beginnings, an air of Campaign pioneers, an air of those years when the first Pilgrim Mothers were sent to Latin American countries, and then to all the world.  There is an echo of what Joao Pozzobon wrote precisely on 27 February 1983, when he learned about the first pilgrimage of Argentineans to Santa Maria, to receive the first twenty-five International Pilgrim Mothers:

Welcome, Father Esteban, Senora Anne and all the pilgrims bringing us the news, the divine inspiration to unite with the original source of the great Holy Rosary Campaign. With this openness we hope to become more pleasing to God. This openness will enable us to receive a great treasure – the treasure being the Mother of God. The Pilgrim pictures from the families are being blessed here in the Tabor Shrine, and in accordance with the inspiration, they are to be sent to each Shrine, from Shrine to Shrine, as dictated by the inspiration of the Holy Spirit…

This Pilgrim Mother and the pilgrims from Buenos Aires represent a triumph of the great crown for Father Kentenich’s centenary. In the crown of the original Pilgrim Mother there is a symbol that unites us in one golden gem. This pilgrimage is worth its weight in gold for the thousands of souls that it may attract to receive the gift of the power of the Holy Spirit. Where Mary is, there the powerful influence of the Holy Spirit is to be found.

Where Mary is, there the powerful influence of the Holy Spirit is to be found…” 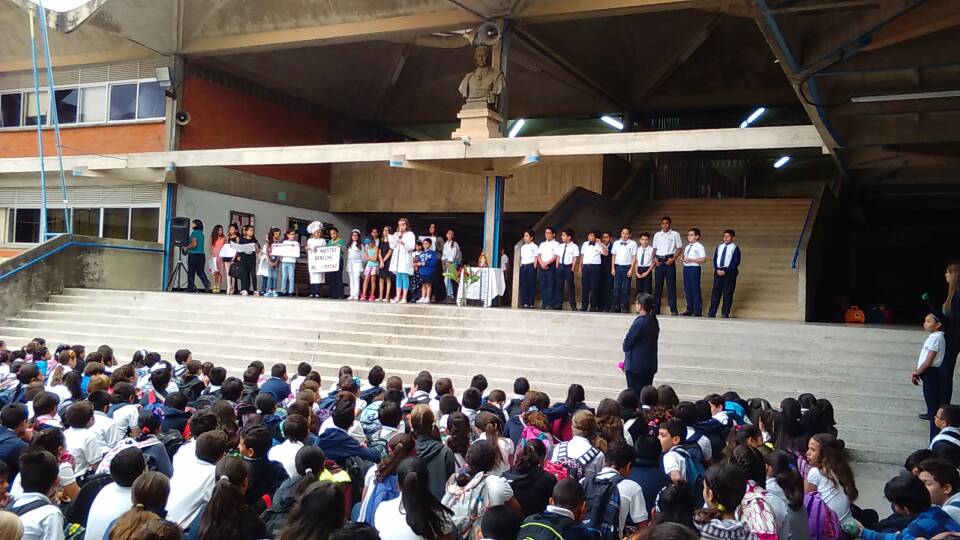 A great time at the school

On Monday, 5 March, the Pilgrim Mother was taken to Xiomara’s children’s school. She received a welcome worthy of a Queen:
“A summary about Fr. Kentenich, the founding of the Movement, the Rosary Campaign, and the Servant of God, Joao Pozzobon was presented. The children prayed a Hail Mary, and they sang to her. Everything was very beautiful.

The Coordinator asked me to take her again next week, and for me to say something to deepen the message of the mission, to pray a mystery of the Rosary, and to sing to her.”

When Xiomara went to retrieve the Pilgrim Mother, it was related to her “that the children and other people prayed very much to her. They prayed for a teacher who is ill, and she has been on leave for a while with a lung tumor.”

The Pilgrim Mother has definitely arrived in Valencia. What will happen next is in her hands.