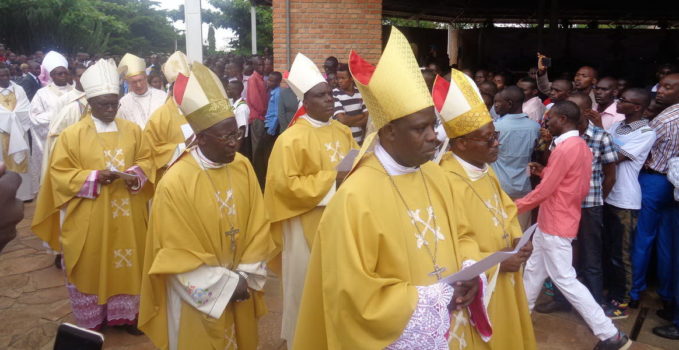 “Let us give thanks for this Year of Divine Mercy, help us to be merciful to one another like the Heavenly Father” was the main theme around which millions of faithful, along with all the Burundian bishops and the Apostolic Nuncio officially celebrated the closing of the Jubilee Year of Mercy and the Feast of Christ the King, on Sunday, 29 November 2016, at Mount Sion Gikungu.

Mount Sion Gikungu, a Schoenstatt Shrine, was elaborately decorated. To welcome the pilgrims, a banner displaying the theme of the day was placed over the entrance door beneath the arch of triumph. The patio only accommodated the vehicles of prominent people. Banners, flags, flowers and a wreath around the altar transformed the church into a real palace for the King of Kings.  There was a civil protection truck standing by to help if needed. There were three tents to welcome the faithful over at Holy Trinity Church, which filled up quickly. 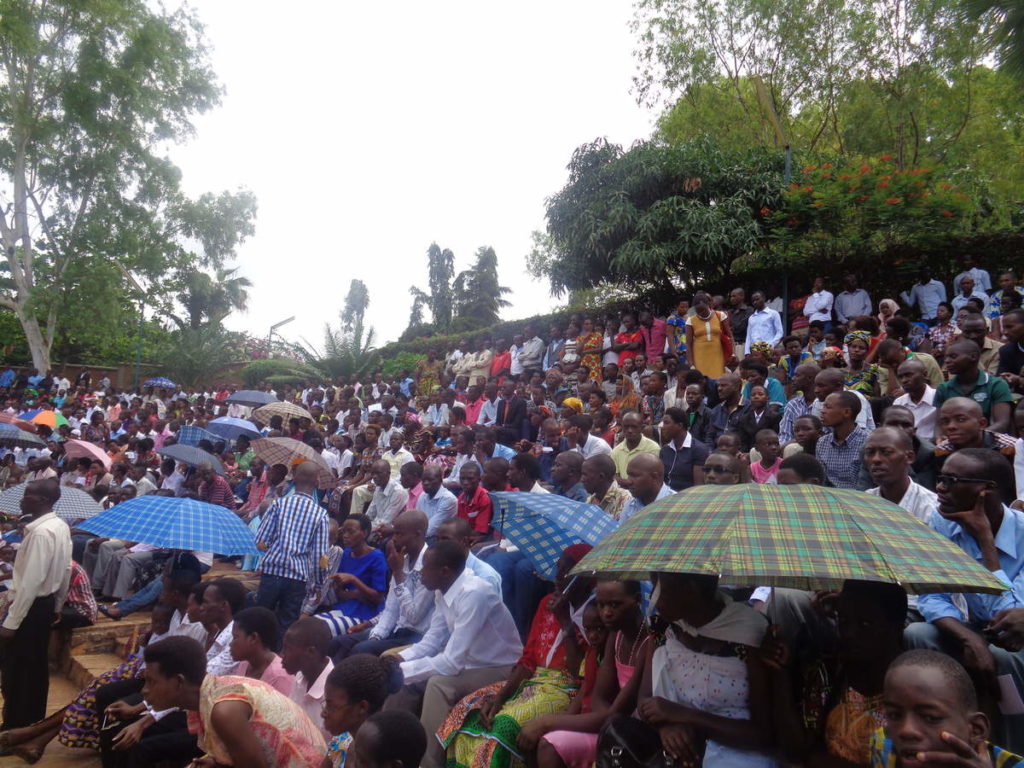 Some pilgrims arrived very early around 8:00 in the morning. They came from different places from allover the country. The number of pilgrims continued to increase more and more. Some arrived with family, others came as a group, and others sang songs of thanksgiving. Delegates from the different dioceses were among those arriving, each one had invited a score of people. The pilgrims were welcomed into this atmosphere of joy with well-selected lively songs.

The Doxology was recited at 9:00. The faithful, who were on the steps, openly greeted the Merciful God. Religious from the different congregations that came in groups for this celebration surrounded the church. Their prayers showed that this year bore much fruit in the life of the faithful.

Bishop Désiré Nibizi’s commentary was primarily an exhortation thanking God for his infinite mercy. He stressed, “By giving thanks, we are merciful in our time.” Alternating teachings and invocations to the Blessed Mother, Bishop Désiré repeated the verse: “Merciful like the Father,” (Lk.6:36) many times. He did the same for his will to see the works of mercy carried out and perpetuated, imitating, according to him, God the Father who has loved us infinitively by sending us his Son. During these rituals, the faithful continued to access the Sacrament of Reconciliation. There were at least thirteen confessors, available at Holy Trinity Church’s western façade. 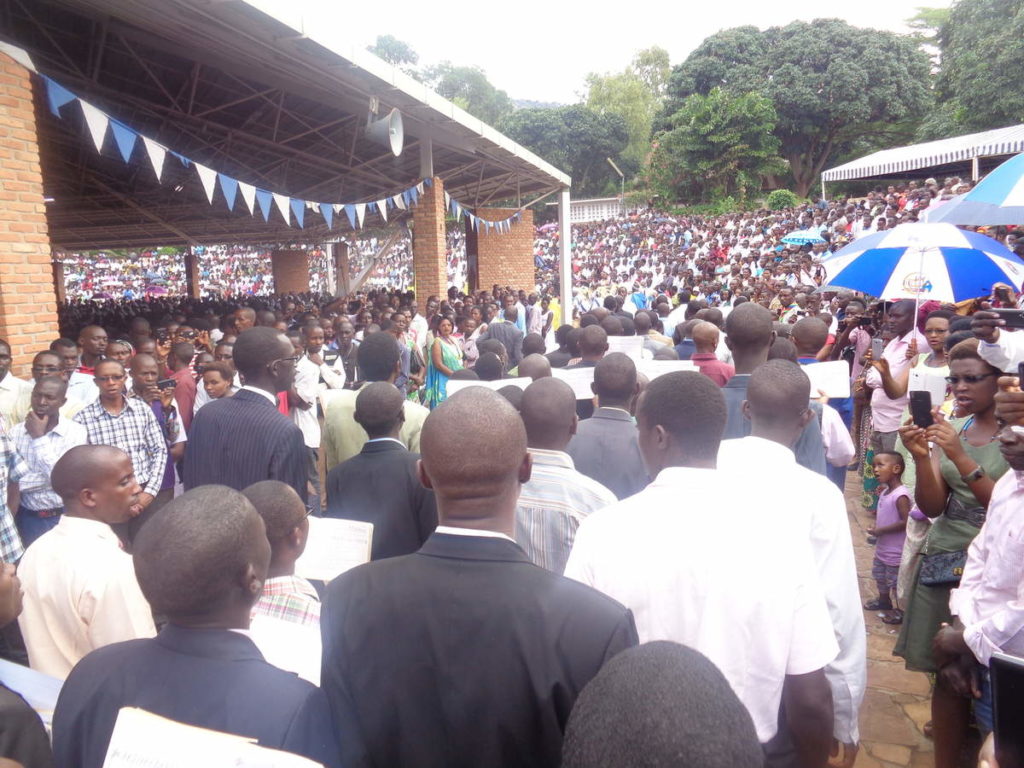 The Holy Mass began at exactly 10:00 a.m. The celebration began with a procession from the sacristy.  Within the procession, there were ten flags representing the different countries, drums of the Chiro Movement, the choir from the St. Cure de Ars Major Seminary of Bujumbura, 105 priests, a deacon, ten bishops including the Apostolic Nuncio of Burundi. Following the rhythm of the entrance hymn, the procession advanced toward the church surrounded by 15,000 faithful that applauded. Two choirs enlivened the liturgy: St. Martin’s Choir of Mount Sion Marian Shrine and the choir from the Bujumbura Major Seminary. There were also outstanding personalities in the assembly: the President of the National Assembly, the Vice-president of the Senate, the Bishop of the Anglican Diocese of Bujumbura, and representatives from the Orthodox Church of Burundi.

At the beginning of the celebration, after the Sign of the Cross and the greeting, the choir from Itabu, St. Benoit of Bugwana of the Diocese from Muyinga sang the Hymn of Mercy. Then on behalf of the Schoenstatt Fathers, Fr. Yves Irakoze welcomed the bishops and those who had come for the celebration. “I am grateful to the Conference of Bishops for choosing the Marian Shrine of Gikungu as the place to celebrate this very important date for the entire Burundian Church. Welcome to the Shrine of the Queen, Mother of Christ, King of the Universe,” he added. 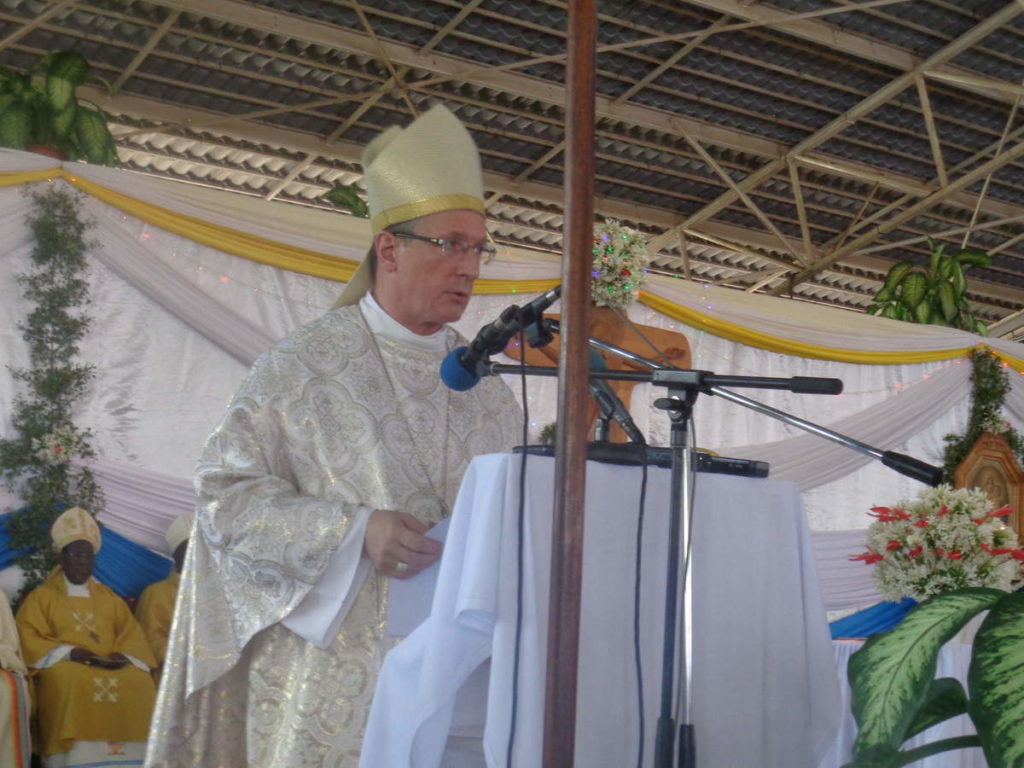 The Nuncio’s speech: Year of Mercy, a time of inner growth

The Apostolic Nuncio of Burundi, Bishop Sauski Vocheri greeted all the participants at the Holy Mass, including those who followed it from a distance (the sick, prisoners…) via Radio María Burundi and the Burundian National Radio Television. Among the expressions of gratitude, CECAB (Conference of Catholic Bishops of Burundi) that has acknowledged solidarity with the Bishop of Rome, he especially thanked the Schoenstatt Fathers for their welcome and the apostolate, which they carry out within the Church.

He said, “It has been a year since I participated in the opening of this Jubilee in the Marian Shrine of Mugera. Today I am happy of be among you, as the Pope’s representative, despite it being the closing. During this year, our Church and each one of us have received many graces, it is for this and in this spirit that we are here today, to express gratitude.  This year helped us to grow interiorly and to turn our gaze to the Merciful Jesus, to become merciful like the Father. The year that we are closing was a time to practice the Works of Mercy, more than ever. This time offered inner renewal derived from the sacrament of Reconciliation. As pilgrims on earth, we always need mercy, for which we should practice corporal and spiritual works of mercy in our time.”

In conclusion, Bishop Sauski Vocheri asked that Christ the King guide, protect and help everyone to live mercy throughout all their lives and that the light of eternal love grant them peace.

After this speech, Archbishop Evariste Ngoyagoye of Bujumbura went to the altar to celebrate the Eucharist. He invited everyone to acknowledge and to confess his or her own weaknesses. Then a religious, a politician, a family (husband, wife and son), and everyone asked forgiveness for their own weaknesses as they recited the Kyrie.

Homily: Christ manifested his kingship on the cross, does this surprise you?

The Archbishop of Bujumbura’s homily was centered on the Feast of Christ the King and the texts of the day (2 Sam. 5:1-3; Col. 1:12-20, Lk. 23:35-43). After greeting all the faithful, he recalled that the Bishops of Burundi united with Pope Francis when he closed the Door of Mercy at St. Peter’s Basilica in Rome. The same Door closed on Sunday, 13 November 2016, in many Churches around the world, among them, the Schoenstatt Mount Sion Gikungo Shrine.

He said, “Today we should express gratitude since we have certainly received many graces. The echo we received from the parishes is encouraging. Some could say, now we begin to understand and you close the Door! God’s Mercy never closes! It will continue in another way,” he assured.

“The Feast of Christ the King closes the liturgical year. We begin the season of Advent on Sunday, 27 November 2016. During this time, the Church reminds us where we are going. Will we end in the tomb or is there another destination? There is certainly one. Let us follow the Scriptures,” Bishop Ngoyage urged.

He congratulated the members of Catholic Action, who keep Christ as their King, and they fervently serve him. He especially encouraged the Chiro Movement that has no other leader than Christ King of the Universe. He urged them to continue to move forward and to reap fruits.

Archbishop Ngoyagoye concluded his homily expressing gratitude to everyone who participated in the celebration, above all the religious who came in groups. Special thanks to the Schoenstatt Fathers for their welcome and their apostolate. He concluded promising that we would continue to experience God’s mercy in other ways, accepting the cross, which is a sign and symbol of Divine Mercy. 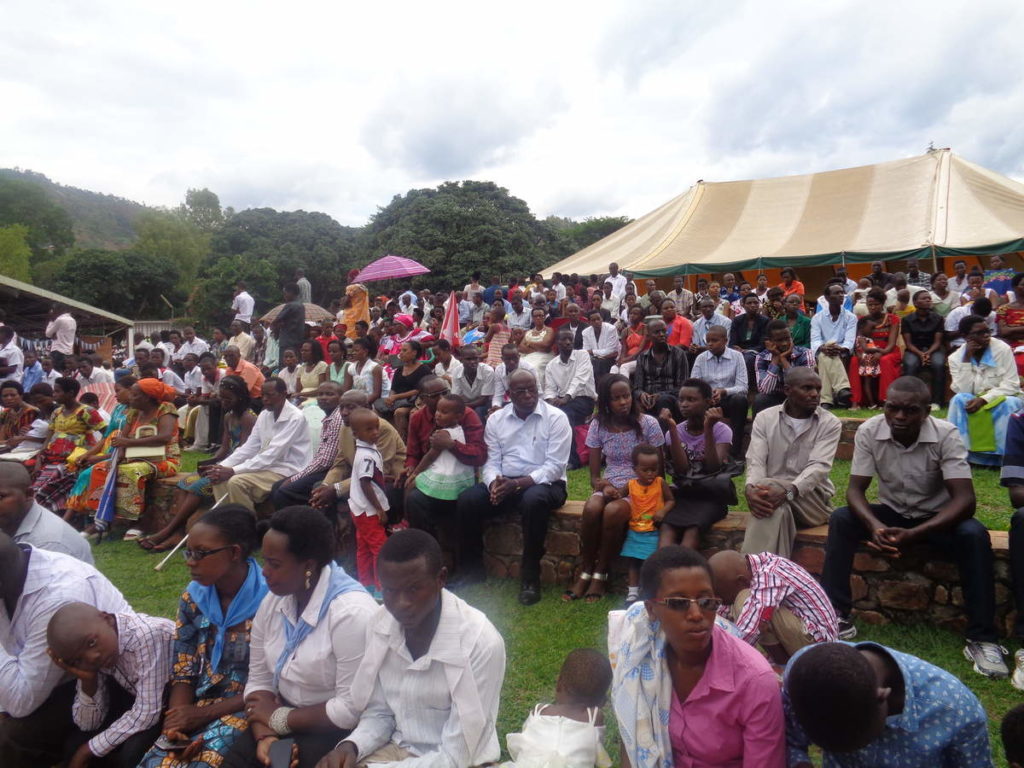