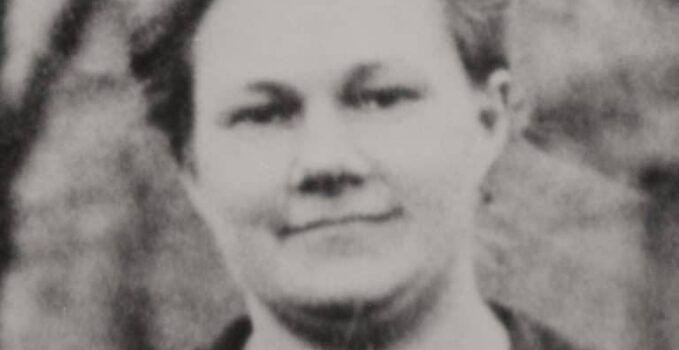 “Commemoration of a teacher” is the title of an article in the Saarbrücker Zeitung, which deals with the decision of the Heusweiler local council to name three streets in a new residential area. “Heusweiler local council reminds us with its decision of two old cadastral names and with “Charlotte-Holubars-Pathway” of a teacher who became victim of the Nazi dictatorship”, so the subtitle. A teacher, a Schoenstatter, a woman who did not let herself be intimidated by the Nazis and paid for it with her life, namely in the Ravensbrück Concentration Camp on November 9, 1944.—

Born and raised in Silesia, Charlotte Holubars worked as a primary school teacher in Heusweiler near Saarbrücken from 1906. She was a deeply religious, committed woman who loved her profession; and like so many others, after Hitler’s “seizure of power” in 1933, she believed that she could also work for her ideals in the NS Women’s Association and the NS Teachers’ Association.

It takes a while, but she recognizes more and more the real attitude of the Nazi regime, and then she is consistent: She leaves the NS-Frauenbund and the NS-Lehrerbund. Many women in Heusweiler followed her example.

And when the former Catholic school is converted into a Nazi school, she retires in 1937 at the age of 53 – formally for health reasons due to some operations – from the civil service. 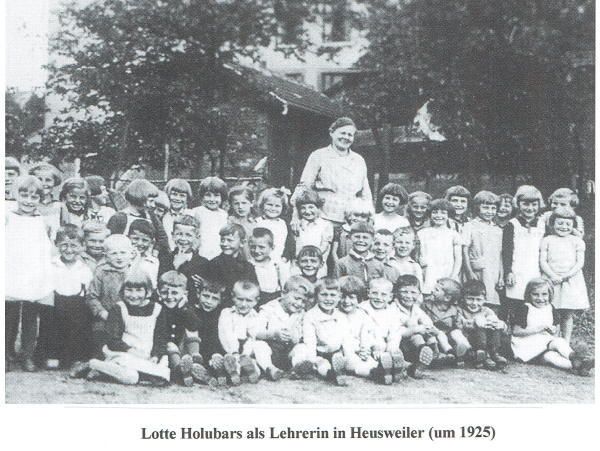 “Lotte Holubars openly opposed the school plans of the National Socialists and devoted herself with great commitment to Christian education in schools. As a member of the Secular Institute ‘Women of Schoenstatt’, she organized a rich group life in Heusweiler and tried to transmit basic Christian values to the young girls,” said Albert Weber, a local historian from Heusweiler, who intensively studied the life of Charlotte Holubars. When a new primary and secondary school was built in Heusweiler in the early sixties in place of the old elementary school in Schulstrasse, it was given the name “Charlotte Holubars School”. Today the building houses another educational institution and the name was changed. But Charlotte Holubars was not forgotten in Heusweiler. On May 8, 2002 a stele with her name and the inscription “”Blessed are you if you are persecuted for my sake…” was erected. The then Superior General of the Institute of the Women of Schoenstatt, Dr. Inge Birk, who was present at this celebration, reported in an article dated May 14, 2002: “After the blessing, the Mass continued in the parish church next door. Instead of a sermon, Mrs. Heimes, a former student of Lotte Holubars from Heusweiler (…) gave an impressive testimony for the two women. Mrs. Heimes, co-initiator of the memorial stone, reported in moving words about her personal encounters and experiences with Lotte Holubars and emphasized the great formative power and warmth with which Lotte Holubars succeeded in giving many people a home and immunizing them against the National Socialists. 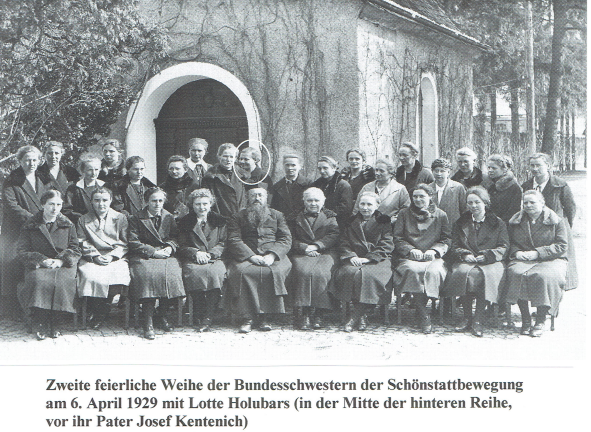 Also ready to give up her life

She had already got to know Schoenstatt in the twenties. During a visit to Frankenstein in her native Silesia, she met the founder of the Schoenstatt Movement, Father Joseph Kentenich, with the Pallottines there. “She must have been deeply impressed by his personality and his words. Because already during the next summer vacation, she went to Schoenstatt for a conference that Father Kentenich held”, said Kaethi Lukas in a biography from 2019, 75 years after her death. Lotte became more and more involved in the still young Movement.  “I want to embody genuine Marian women’s spirit myself and teach it to others,” is written in her consecration prayer from 1929.

When she left the teaching profession in 1937, she moved to Vallendar/Schoenstatt and worked there for the new Secular Institute of the Women of Schoenstatt. “We feel weak, but we are ready! Ready even when we no longer understand God’s guidance? Hail, O Queen, we are ready to give our lives. We greet you”, she prayed when the persecution of Schoenstatt by the Nazis was already very threatening and palpable.

“When she returned to Vallendar in the autumn of 1942 from one of her many trips, the Gestapo searched her apartment and found copies of Father Kentenich’s letters from the Dachau concentration camp. Thereupon she was imprisoned in the Carmelite prison in Koblenz. In the trial that followed, the sentence was three years imprisonment. She did not serve her sentence, however, but was deported from Koblenz to the women’s concentration camp Ravensbrueck. The conditions there are very hard on her. However, according to eyewitness reports, her Christian attitude remained unbroken. Charlotte Holubars died in Ravensbrueck on November 9, 1944”, according to the website “Koblenz Memorial”, a virtual memorial for the victims of National Socialism in Koblenz and the northern Rhineland-Palatinate.

What makes this woman interesting today? 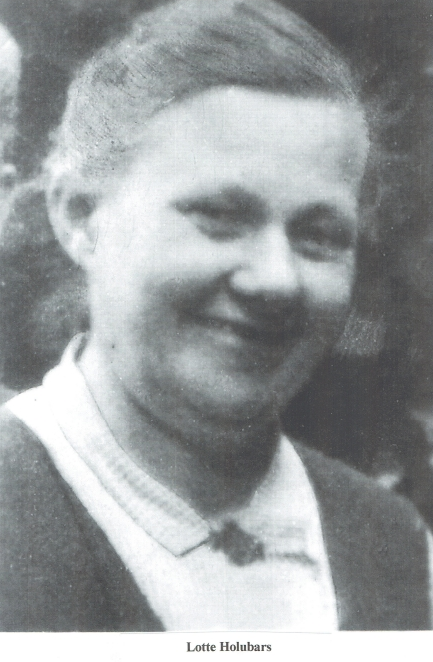 The celebrations of the 75th anniversary of the end of the Second World War and thus of the end of National Socialism have fallen victim to the pandemic like so many other things. However, everyone who opposed National Socialism, everyone who resisted the pressure of a dictatorship – a political dictatorship, a dictatorship at work, in the expression of opinion, in freedom of faith, conviction and the shaping of life – is important.

The prisoners spoke after her departure from the prison in Koblenz of the “holy teacher” who had been with them, when she was imprisoned for several months before being transported to the concentration camp. “She was one of those strong, feminine souls that I have encountered very rarely in my prison pastoral care, perhaps only once in her life. (…) When the question about the future was asked of me, the same calm, self-evident answer was: ‘As God wills it, he directs everything right. From the many conversations I had with her, I could see – without her saying it directly – that all of her thoughts and aspirations were for Schoenstatt and for his Work, that she bore all her sacrifices and her loneliness as a sacrifice, that she offered the Lord for Schoenstatt so that it would remain, and especially for the spiritual ‘motor’ of the Work, Father Kentenich, that he would return to Schoenstatt from bondage.

Charlotte Holubars was “a woman with a defined personal ideal and a clear pedagogical and apostolic vocation,” said Ms. de Soto from the Institute of Women in Schoenstatt. “Elegant, feminine, passionate and efficient.  Attentive to the needs of others, especially the most disadvantaged.”

And: “Lotte had great leadership qualities and did not shy away from taking responsibility on all fronts. She was a courageous, principled woman who was not discouraged by the mainstream, but always looked for ways to carry out her apostolic work.”

Using material generously donated by the Institute Our Lady of Schoenstatt. 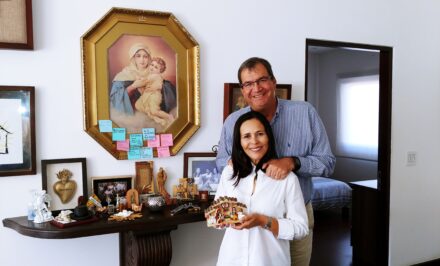