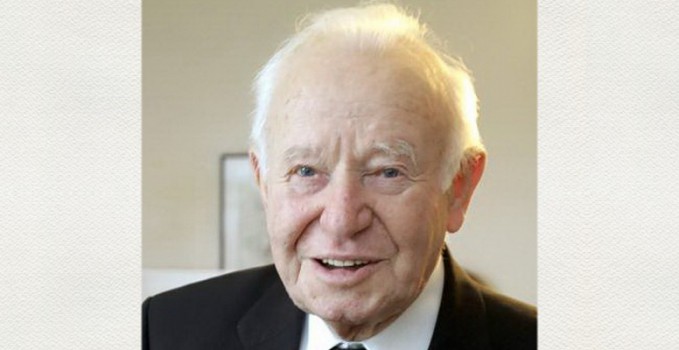 “That’s him!” The article that appeared in the Rheinische Post newspaper was as zestful and mischievous as Fr Theo Hoffacker, a member of the Schoenstatt Priests’ Federation, on his 90th birthday. “Heart and soul a priest”, Heinz Kühnen wrote, and that is what Fr Hoffacker is.

“The man keeps himself fit: cycling and swimming are simply part of life. In the past he went with his twin brother to sail in the Adriatic, and until a few years ago he regularly went skiing in Switzerland. Tennis is also a thing of the past – “there are no partners left in my age group!” Fr Hoffacker remarked. “He has just celebrated the 65th anniversary of his ordination, and on 1 January he turns 90 years young.”

Ten years ago Stefanie Frank, a student journalist, wrote her impressions of Fr Hoffacker. “Whoever sees and hears him will never think that Fr Hoffacker is 80 years young. He is very agile and fit, and talks about his experiences with great enthusiasm, which immediately passes over to his listeners. He manages to grip his audience with his tales, and from time to time uses expressions that only the youth know. That’s Fr Hoffacker.”

On the occasion of his 90th birthday, we are publishing extracts from the article by Stefanie Frank, which was written during a camp of the Schoenstatt Young Men. That was ten years ago, but still applies today! 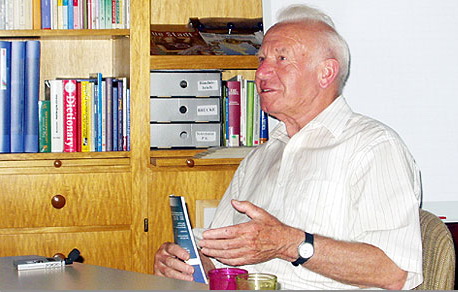 As the youth chaplain in Duisburg in 1951, Theo Hoffacker, as he himself said, took the first tentative steps with running a camp, although not with quite so many participants. In the second year he teamed up with his twin brother, Norbert, and they camped on what is today the “Pilgrims’ Arena” with 150 young men. From then on they went camping every year and Fr Hoffacker was always there. He can no longer remember how many he accompanied. “I normally do my bookkeeping, but not of my misdeeds”, he said. There must have been many such camps during which he repeatedly experienced exciting things, which he gladly remembers. For example, the 1951 camp had a tiny camp chapel, one of the boys played the accordion, another the violin. Sitting around the campfire they sang typical campfire songs. “One day, some dear Sisters admonished me. We should not continue to sing such terrible songs, they said, because the Sisters felt unable to have Adoration hearing our songs. After that we sang American songs and the Sisters said no more.”

Another Sister in all her glory from the Sonnenau (Girls’ Centre) surprised Fr Hoffacker in 1958 at the campsite and asked to speak to the leader. He was in shorts and announced that he was the leader and chaplain. The Sister reacted with shock, “What are you? Are you the chaplain?”

Such things happen in the course of 56 years running camps, and a lot more besides.

Shortly before the “dedication of the knights” on the last day of the camp a boy jumped from the camp tower. Hoffacker, who was already fully vested near the shrine, observed the helicopter flying just above him, and was informed shortly afterwards about the accident by one of the boys, who was “in effect a dispatch rider”. After the injured boy had been taken away, the other boys joined him in great excitement. “The brother of the injured boy came to me and said he wasn’t baptised, but his brother was, so would he be allowed to join in praying for him?” He went on, “That’s the way of things. The elemental interplay of nature and grace can only be experienced in this way. That is the school of the nation. Still young, still up-to-the-minute.”

The parish priest and his charges

Of course a parish priest is also interested in what has happened to his former charges in the course of the years. Many have started service within the Church. Such experiences left their mark on them. “It isn’t possible to listen to fifteen talks without them having some effect.” His former charges love to recall those times. This year’s participants have already announced that they will be joining Fr Hoffacker next time. He advised them to find someone younger for next year, but they replied, “No, you must come again next year. There is no one younger than you.”

Other charges have become Schoenstatt Fathers who have worked in his parish, like Fr Penners, who “turned out OK” Hoffacker laughed.

Hoffacker’s memories of his first visit to Schoenstatt

He has a very close connection to Schoenstatt. He visited it for the first time in October 1942, at the time when the Nazis had already deported many to concentration camps, among them Fr Kentenich. Hoffacker knew about it and was interested to learn more.

In 1944 he returned to Schoenstatt and climbed up into the choir loft in the pilgrims’ church, and behind the organ a priest told him more about Schoenstatt. The priest, who was able to put things very clearly, managed to convince Hoffacker, “Whoever is against the Nazis is tops. We need such people.”

His decision to become a priest was greatly influenced by Schoenstatt. Besides his first experiences, he was particularly enthusiastic about one thing. On 21 July 1944 he visited Schoenstatt during his leave. At the time he was in a parachute regiment in the German air force, and met up with a soldier from his division. The soldier opened a book with a photo of his mother and a picture of the Blessed Mother; he pointed to his mother and said, “She’s dead!” Then he turned to the picture of the Blessed Mother and said, “She’s still there!” For Hoffacker it was a decisive experience. “This wonderful man! If he can trust God in such a way that he can say: I still have a Mother if I have the Blessed Mother, I will take her with me as well.” So she accompanied him all the time while he was flying through the shelling in the Ardennes. He had a field flask in the back of his seat, and later he was able to count thirteen bullet holes in it, yet he remained unharmed. He said, “Servus Mariae nunquam peribit”, which means that a child of Mary will never perish. “If I hadn’t had her, I would never have got out of many situations. Honestly!”

These experiences strengthened his desire to become a priest.

The first time was in the Retreat House (today Covenant House) in May 1946. Fr Kentenich spoke personally to each of the young men there. It turned out that Fr Kentenich knew Hoffacker’s aunt who was a Schoenstatt Sister. “He immediately knew her name. Wow! I thought, that is a man who can remember things like that!”

When he was 36 and the youngest priest in the Munster Diocese, his bishop advised him to get the help of a Schoenstatt Sister. When he met Fr Kentenich, he slipped a note with his name and request into his hand. He again remembered him. “He placed the slip of paper into his coat pocket and greeted the next one. I found it a bit strange and thought to myself that it would take a trip round the moon.” But about eight weeks later a Schoenstatt Sister turned up to start work in his parish. “That’s how you could trust him! It speaks volumes.”

Before he set off to return to Xanten, he offered to visit a camp again, or “to drop by during one of his bicycle tours”, as he called his outings, during which he could travel 200 km in three days. He wanted to experience “the magic” once more. With he smile he added, “But you’ve got to really pedal. I was on the way recently with a group of young women who asked afterwards if this could take me along with them again. I always passed them when we climbed a slope. The decided among themselves to do it.”

With these words he took his leave, and we can be sure that next time he will have many new tales to tell. 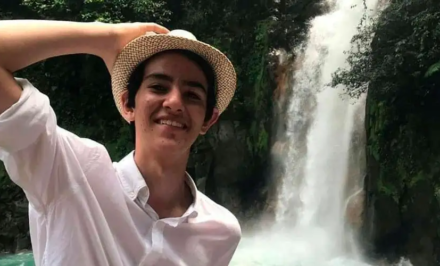