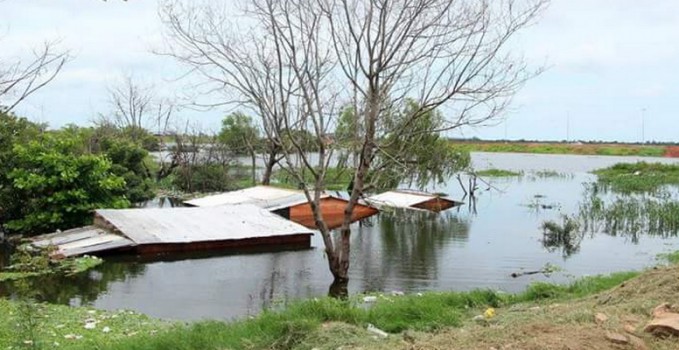 Dequení in solidarity with flooding victims

In the midst of fundraising to collect funds and to conquer scholarships in solidarity so that thousands of children from families with limited resources can attend school in 2016, Dequení is in solidarity with all the families affected by rising Paraguayan and Paraná’s rivers and their tributaries.  Among the displaced, there are families accompanied constantly by the Foundation projects, in the communities of Villeta and Arroyos y Esteros.

Dequení is working with community leaders and SEN’s (National Emergency Services) contacts, the cities and governments to assist the families affected with their basic needs, especially the protection for children and their health.

In the case of Villeta, the affected families were moved to their relative’s homes.  At Arroyos y Esteros, families live bordering the Manduvirá River in one of the areas most affected by this situation.

The roofs and walls of the community centers in Caaguazú and Ypané were also affected by the recent strong storms.  Activities were suspended even in the children’s vacation colonies, which they were hoping to start at this time. 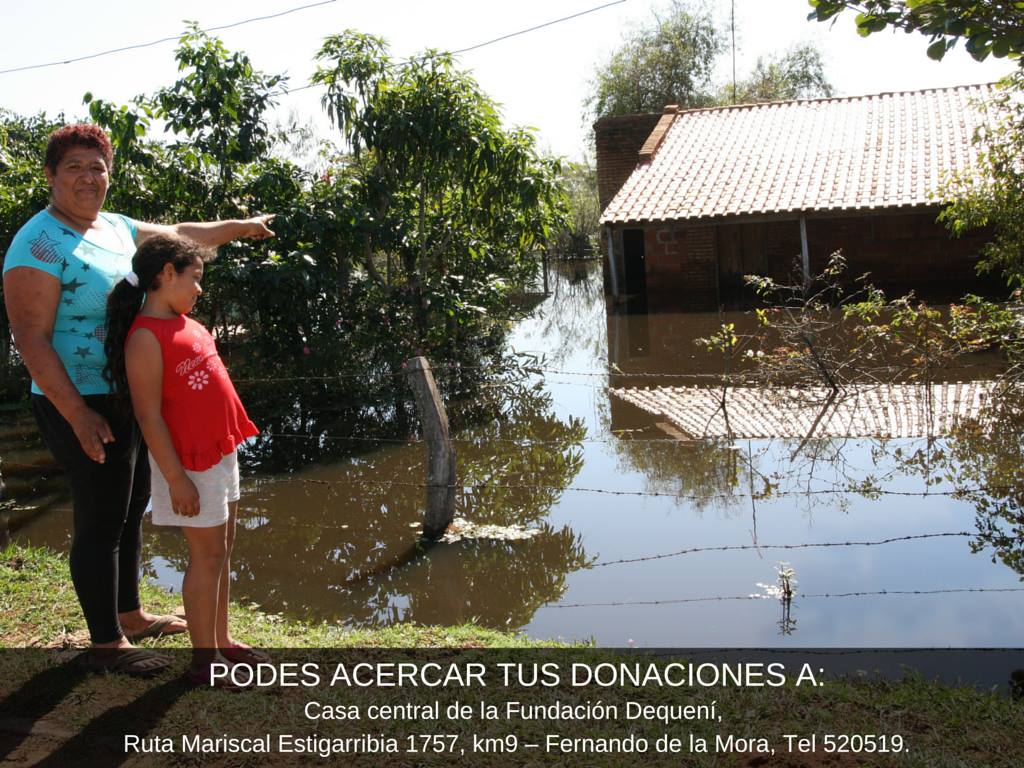 During the month of December before the floods, Dequení carried out different closing of the year events in each one of its projects.  The Foundation gathered communities, where it is present in Ypané, J. Augusto Saldívar, Luque, Fernando de la Mora, Villeta, Caacupé, Arroyos y Esteros, Caaguazú and Ciudad del Este.

The boys and girls, who are always Dequení’s reason for being, displayed their talents during these exciting events.  The community centers were filled with families, children, youths and adults, and those from rural areas had to walk several kilometers in order to attend.  The committee mothers, dressed in their best clothes, were the hostesses.  The walls of the centers were filled with color, posters, drawings and the children’s handicrafts.

Every celebration had it unique moment; the boys and girls attended in clown, rabbit, and rock star costumes… They paraded and acted while their excited parents clapped, laughed and took photos.  After his presentation, José Miguel (4) said he had enjoyed it very much.  Mariza Rivarola, a mother from Villeta, proudly affirmed, “Everything is possible when we unite.”

We do it for the children

“We have worked so that the boys and girls, families and communities have greater opportunities to grow and to develop.  We are happy to share these moments as a community,” affirmed Gloria Arrúa, manager of the Foundation’s social area, during one of the gatherings.

During the year, twenty-one projects in ten areas were implemented. The Foundation strengthened the work in education, health, nutrition and community organization.  7,671 boys, girls and teens were protected; 3,745 families were accompanied.  At the centers, 1,101 boys and girls ages 0 to 5 participated in pre-K and schools.

The Foundation’s results were sustained by seventeen parents’ committees and twenty-two boys’, girls’, and teens’ committees, dedication in caring out their projects.

“We offer it to the Blessed Mother as capital of grace”

“We learned a lot, and we got over the embarrassment of speaking in public through the training that we were given this year at the school.  Before, I did not want to speak in public, now I cannot believe that I can speak to the mayoral candidates of Cordillera,” shared Ángeles Cowan, a 4th Grade student, about her beautiful experience this year.

Finally the Dequení workers’ team also carried out their annual closing on 17 December with Holy Mass at the Main House; Fr. Pedro Kühlcke, spiritual director of the foundation, celebrated.  On this occasion, Andreza Ortigoza, the executive director of Dequení, recalled the Foundation’s benefactors, who offer much goodwill that makes Dequení possible, and all the work offered as capital of grace.  “We offer 2015’s accomplishments, the support of so many people and businesses in solidarity to the Blessed Mother on this day.  Thanks to everyone.” 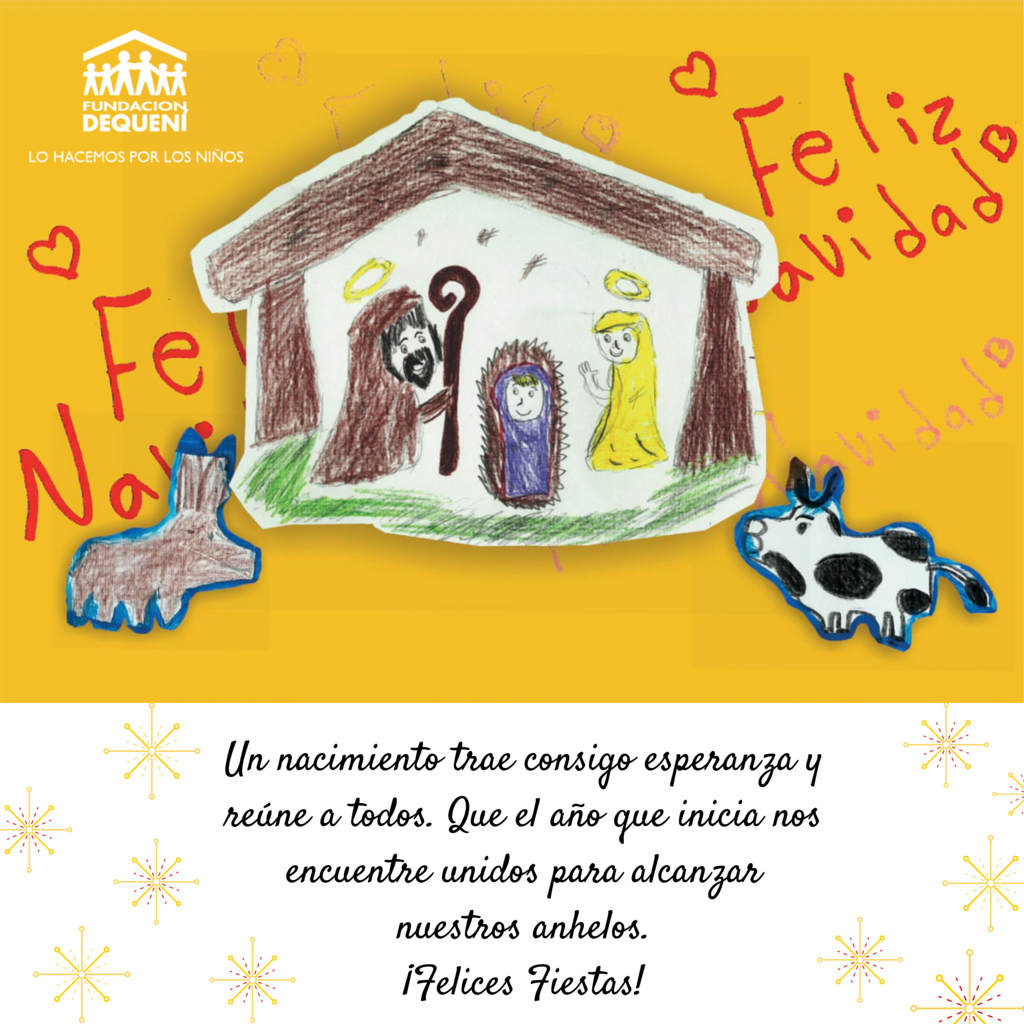 A birth brings hope and it unites everyone.

May this New Year find us united, so we can reach our desires.

Dequeni needs everyone’s solidarity.  Donations can be made: