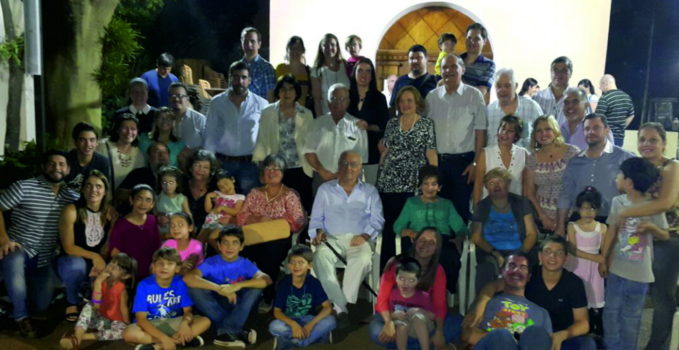 The Tayi Group is here today, forty years after being called.

We want to express thanks for choosing us to be a part of our nation’s Schoenstatt Family and for being a part of the first generation.

Looking at the present and seeing how the Movement has grown in broadness and fruitfulness, we can affirm with humility and joy that the motto guiding us at that time and everything that was offered was not in vain: “Mary descend in Tupãrendá through your giving of self.” 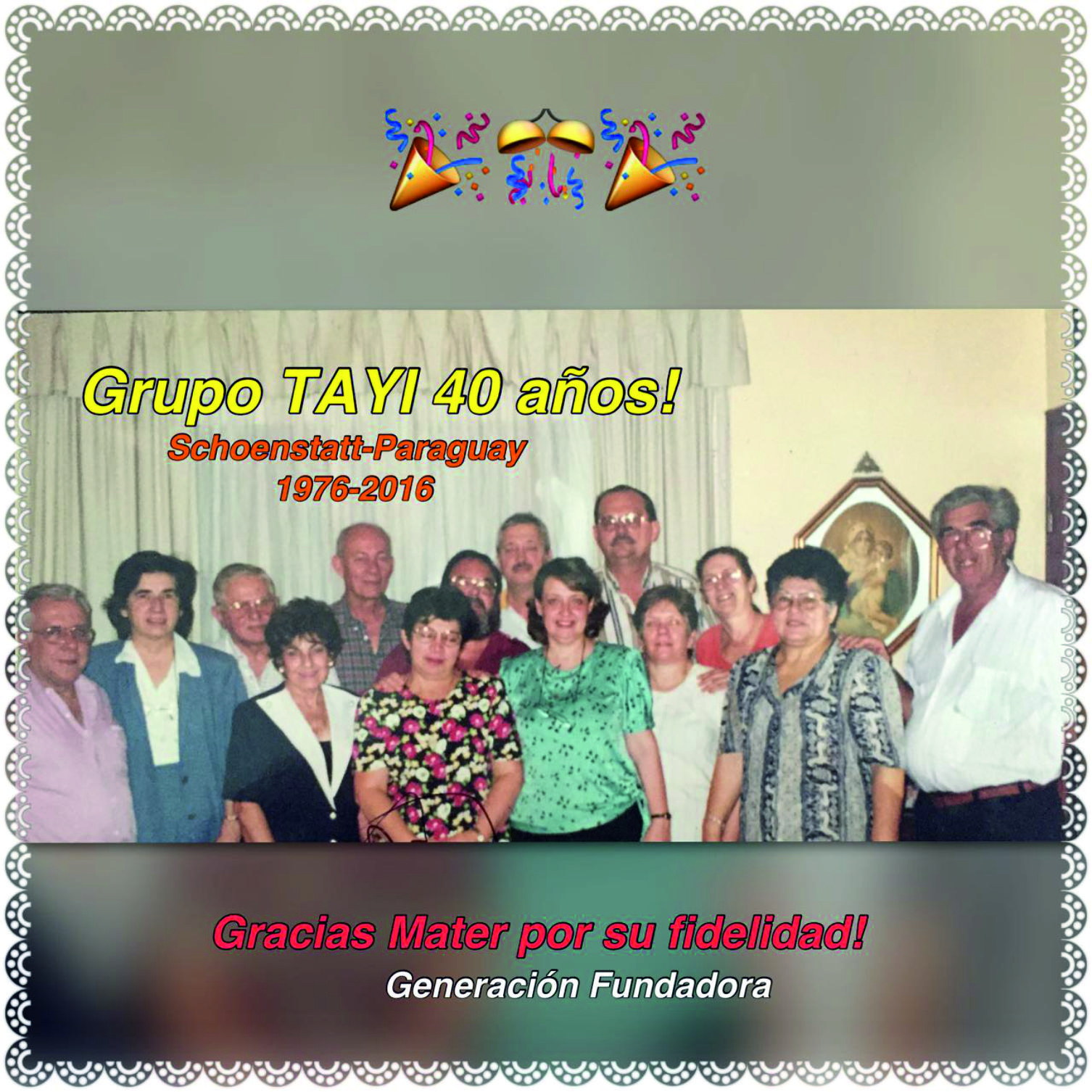 That Tayi grew and spread its seed…

Today we pray for this new and young generation in the Movement, so that they may live the “Nothing without You, Nothing without us” with mission consciousness and that they make our beloved Paraguay, the Nation of God – heart of America– a reality, a little more each day.

On this day, we must express gratitude to our first Adviser: Fr. Antonio Cosp, Fr. Nicolás Schwizer, Bishop Claudio Giménez and Sr. M. Andrea, and to our beloved group leaders Magdi and Nonino, who taught us to take the first steps on this road as Schoenstatters.

Like on the first day, we say today and forever: We agree on this, we remain loyal!

Semblance of the Tayi Group of the Apostolic League of Families

The first Gathering of the Schoenstatt Movement Family Branch in Paraguay was held in 1976. Three groups were born from this gathering: Renacer, Tayi, and Pequena Grey. Moreover the entire “Tayi” group has remained loyal since that initial gathering.

The eight couples loyal to Schoenstatt, who lived that first founding time with radical, sacrificial giving of self and with the fire and strength of the founders are:

For the inculcation of Schoenstatt in Paraguay

As a group, we chose the name “Tayi;” it is a Guarani word that means “Lapacho” in Spanish [a type of South American tree]. We chose this name because with it we wanted to express our mission as a founding group:

It was a concrete way that Schoenstatt would be instilled in our nation.

Just as the lapacho sinks its roots in the soil, we desired that Schoenstatt would flourish in our nation. We wanted to be like tayi tree that has deep roots with firm, hard, and strong wood. If the roots sprout and take root in the soil, then, in the future, their leafy and beautiful branches will shelter many people and give their beautiful flowers and fruits as an expression of life and plenitude.

We are filled with pride to see the Schoenstatt Movement in Paraguay today, and we can say with certainty that the MTA accepted our giving of self and the commitment of those faithful eight couples. Just like the tayi, Schoenstatt has put down profound roots in our Paraguayan soil. The motto during the years of conquest of the grounds and of the Tupãrendá Shrine was a great stimulus and impetus for each one of these couples and for the small Schoenstatt Family of that time:

“Mary, descend to Tupãrendá through our giving of self.”

Everyone giving everything for Schoenstatt

At that time, we were part of the Movement’s leadership tasks. We made Tayi grow with specific works: one of the members who had an iron works, made the bell and the bell tower of the Shrine of Tupãrendá, another was Tupãrendá’s administrator, another helped in the economic part, another on the mission team, others were in charge of the group etc, etc. Each one was giving everything for Schoenstatt.

When they had already bought the Tupãrendá grounds, the group donated 100 little Tayi trees, which we planted in special places throughout the large grounds, with Fr. Antonio’s help and support. This was an adventure and sacrifice, since at that time the majority of the grounds were rugged landscape. There was only water in one place, and we had to carry buckets with water to water each little tree. Today we are excited when we see several of them flourishing. These trees are a great sign for the group, and undoubtedly are an expression of the fruits of joyful and loyal sacrificial giving of self.

On this jubilee day, we also want to remember and express gratitude for the lives of four group brothers/sisters who have already departed to the Father’s house. They are: Estela and Manolo Muñoz and José Fernández and Rosa de Ortiz.

The schoenstatt.org team is proud to have a “tayi” in the group, the great tayi, Kikito Vázquez, translator of Portuguese to Spanish. 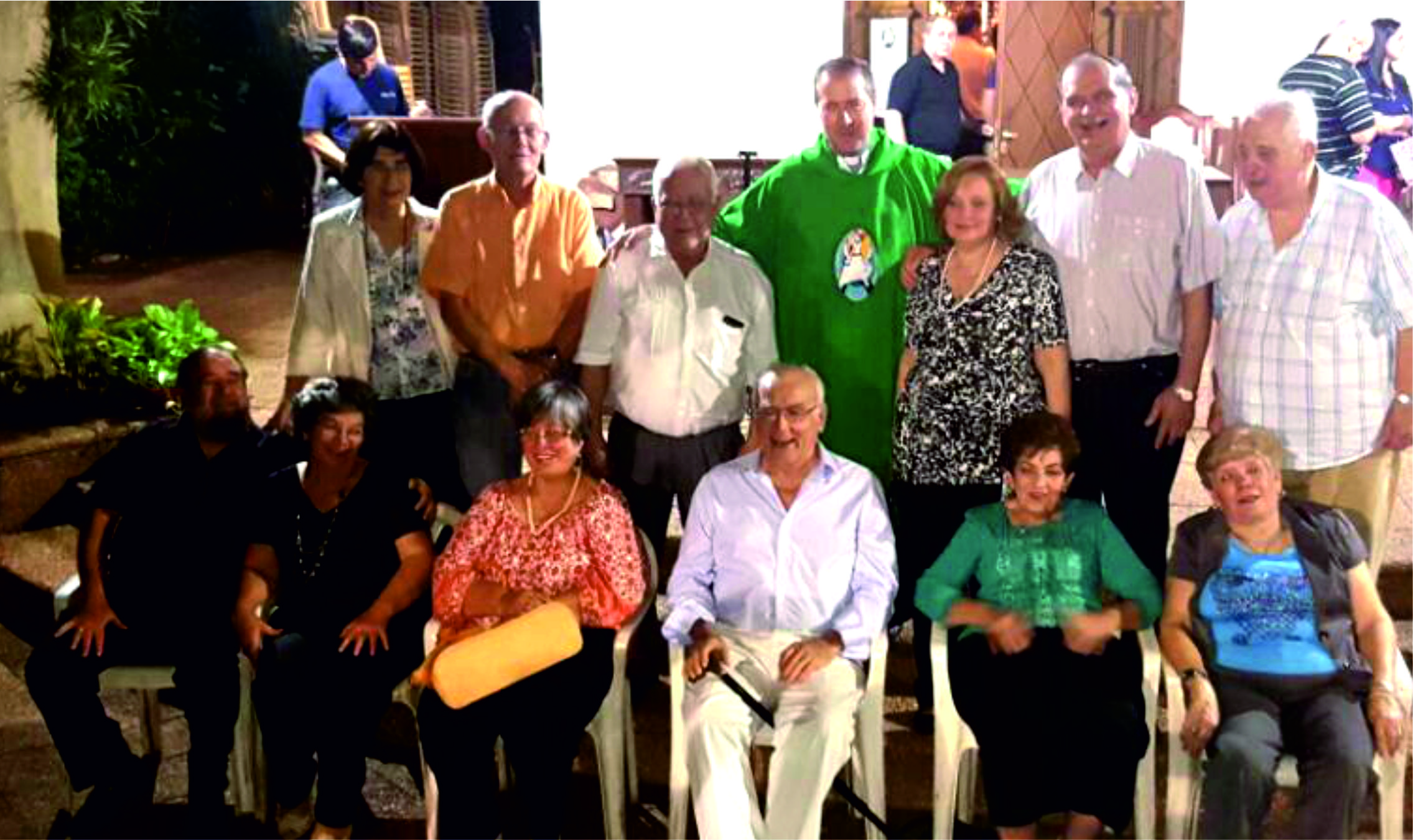