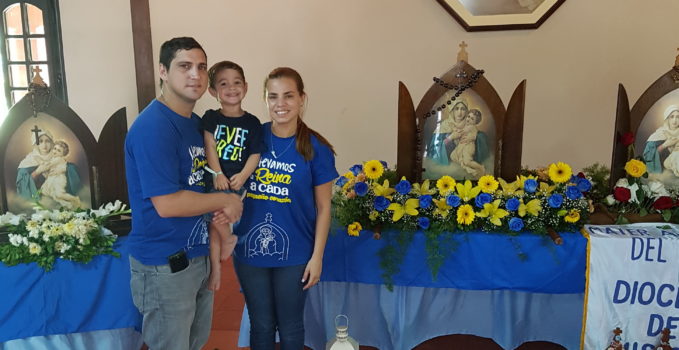 No coincidences with the MTA… just a Mother’s love

From my childhood, I was in charge of the Pilgrim Mother that my mother was given. I was 8 years old, and I would take her on mission like some super special task my grandmother had entrusted to me. When I grew up, I got away, without knowing why, but I know that my Pilgrim Mother continues to mission today with a family that is charge of this beautiful task.

She was asking me to return to her

One day I understood that with a tug on the ears, the MTA was asking me for contributions to the Capital of Grace. My son’s birth on such a special date was a sign, and throughout my life, I will say, “My son was born on Our Lady of Schoenstatt’s day. I understood that she not only wanted this for us, but that with such an important event, she was asking that I return to her. That I return to the Tupãrendá Shrine, to that place that I traveled through as a little girl. I knew every corner of that piece of heaven. Her picture was my childhood for me, her picture was my home for me, and it was my family. I saw her in my house, I saw her at my grandmother’s house, and those of my aunts. I grew up with her always attentive and strong gaze. How could I leave her and how could I move away, if she was only preparing a beautiful road for me? Like a good heavenly Mother, she thought about everything, and she made me return, but not alone but accompanied instead by my family, my husband and my son.

We gave ourselves completely to her requests and everything that had to do with the Movement. We decided as a family to always say, “Yes” to her calls, and this year we had the first experience of the most beautiful love of all.

A dream, a trip and the close company of the Blessed Mother

When I met my husband eight years ago, his life story always touched me, because his mother lives in the United States, she left when he was only 14-years-old, and he met his father when he was 18. Step-by-step, my mother-in-law followed the entire evolution of our relationship, our wedding, and the birth of my son thanks to today’s technology. She followed Bruno’s progress and learning; she did not miss anything. My mother-in-law left for the United States sixteen years ago and ever since I met my husband, we had dreamed about traveling to see her and her 10-year-old daughter; the sister that my husband did not know because she born in the United States.

The opportunity for this trip emerged when my brother-in-law (my youngest sister’s husband) found a relatively affordable promotion for us. The bad thing about the promotion was that it expired that day at 12:00 p.m., and we could not have the money in such a short time. I do not know what happened to my brother-in-law (surely, she touched his heart) who said, “I will buy the tickets for you and you can repay me later.” That was how it was; we took a risk, and we bought the tickets without having a North American visa. From that moment, we gave her this trip, and we prayed with our heart in hand that she would help us obtain the visa. An image I will never forget was that of my husband kneeling and praying in the Asunción Santuario Joven, for a long time (he had knee surgery three months before), so I knew what a great effort it was for him.

We were afraid because despite such a long time, my mother-in-law still did not have documents for citizenship; the risk was great. The day of our interview, a Schoenstatt aunt told me not to go alone, to go accompanied by the Blessed Mother, to give everything to her, that if she wanted, this trip would happen. I took a holy card in my purse, and we entered. It is difficult to explain, because we were touched to see that things were predisposed like only a heavenly mother can do for her children. We had divine help that could only come from her.

An embrace of 16 years of saved love

Since then everything was exciting until the day arrived in which my mother-in-law and my husband embraced again after 16 long years. Our entire family, friends and our Schoenstatt Family experienced this encounter expectantly. Of course, it was not just any vacation trip; it was 16 years of saved love, of saved kisses, of embraces not given. It was 16 years of tears shed and of always saying, “Someday we will embrace again.”

It was what she wanted. We promised to go to a Schoenstatt Shrine in the USA, we went to the Shrine located on Staten Island, New York, and we felt what those who already had the privilege of visiting another shrine always say. She was waiting for us with open arms, and like every demanding mother, she made us go on pilgrimage, but it was not easy to find her. However, she was there, beautiful, waiting for us. My husband gave himself entirely to her; it was an image that will always remain in my heart and mind. He was kneeling, crying, expressing gratitude to his heavenly Mother for making it possible for him to embrace his earthly mother once again.