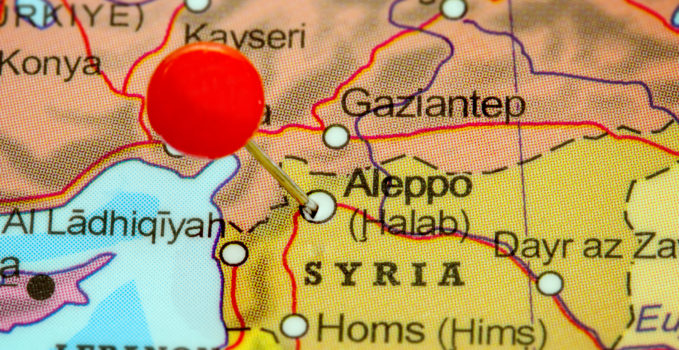 The Blessed Mother is in Syria and Iraq. She will work miracles.

An update on Aleppo and Sister Maria Guadalupe’s story

On our site for some months now, we have tried to keep the attention and the interest alive on the events taking place in Syria and Iraq, as much as possible. The war, as we all know, does not appear at all to be diminishing and unarmed people cannot do anything else but flee – again, where?  – or live in hardship amid the ruins of cities razed to the ground. However the media around the world seems not to pay any attention at all. Only a few of the big news agencies continue to transmit news about what is happening, but with difficulty.

Recently we published the news of a prayer initiative in Germany and the moving story of two Pilgrim MTAs in Aleppo, sent there via an Argentine nun, Sr. Maria Guadalupe de Rodrigo, a missionary of the Incarnate Word.

Today Aid to the Church in Need (ACN), a Pontifical Foundation – that brings projects supporting Christian populations in places where they are persecuted to fruition – has issued this press release, which is shown below, in which Sr. Guadalupe talking.

We are happy that, at least through this press release, we are able to follow the events that somehow bind us to Aleppo, where images of our Blessed Mother are.

She will work miracles in a desert, in a place of death and destruction for excellence in the Bible, and help people find salvation. Mary, steadfast and faithful, will cause Jesus to be born again this Christmas and be the hope for all those who now do not see any way out, and will return to live again in the beloved land of the Middle East. 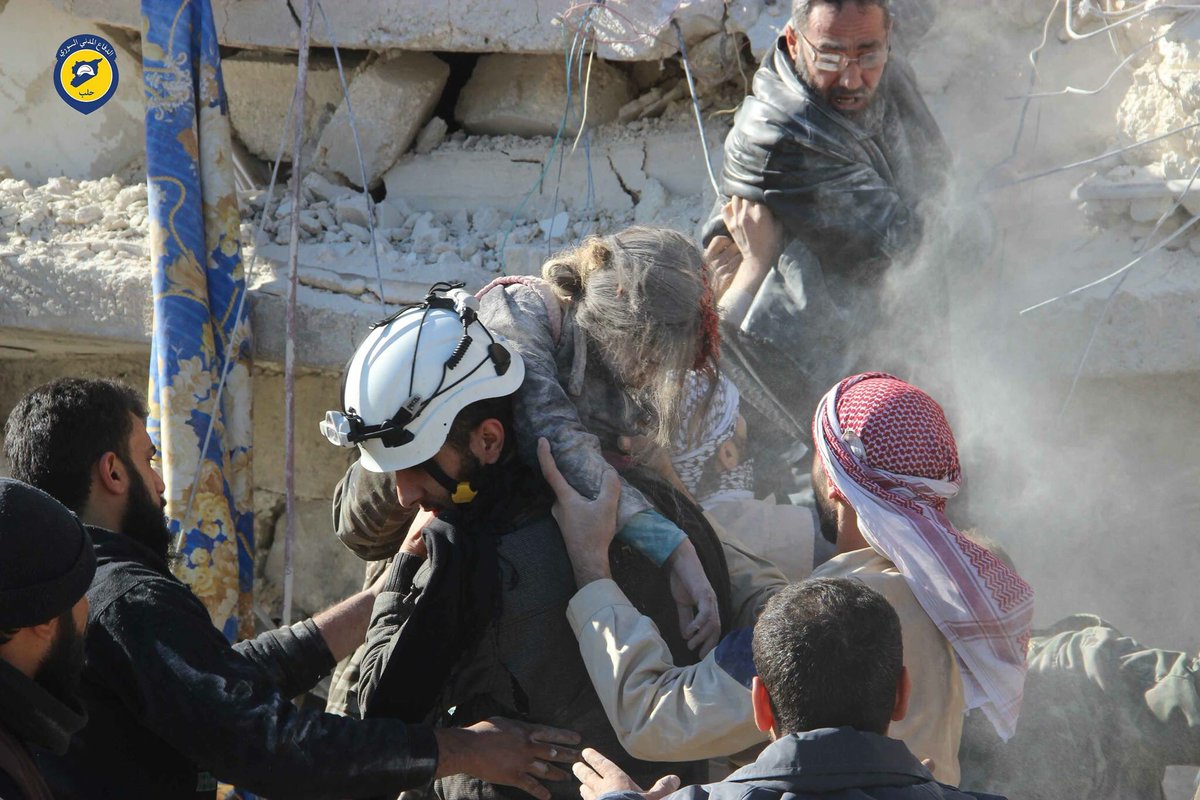 Sister Maria Guadalupe de Rodrigo at ACN-Italy: “For Aleppo there are no Christians in name only, but Christian-witnesses, that is potential martyrs.” 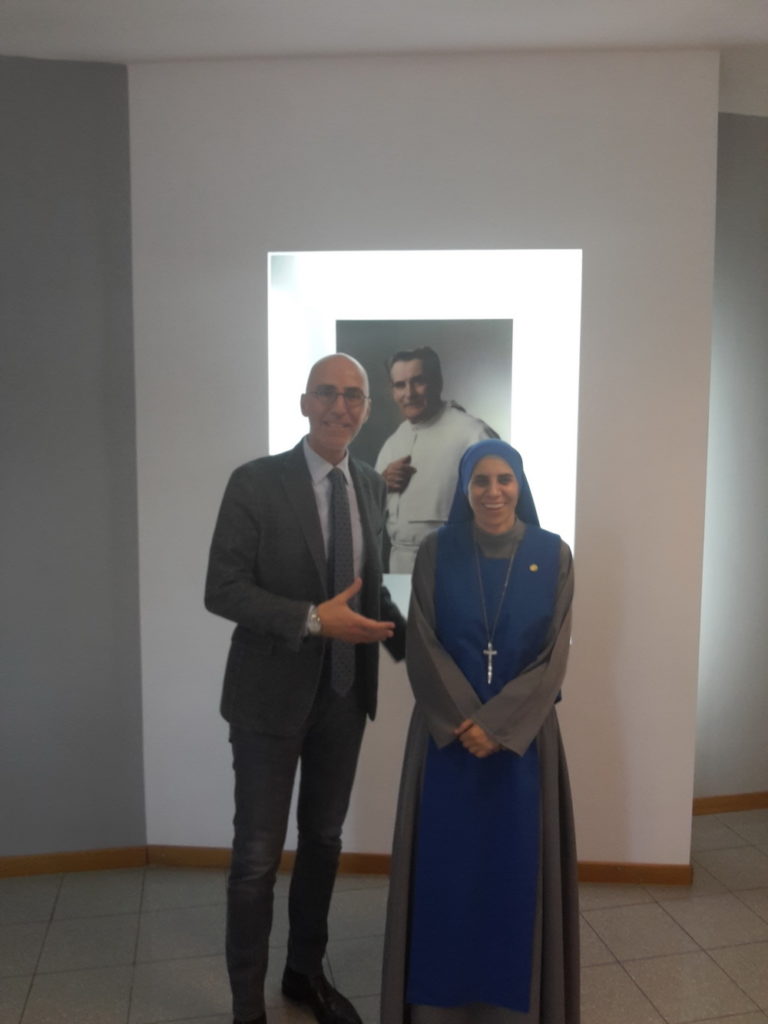 “In Aleppo the persecution against Christians is there and it’s obvious.” These are the words of Sister Maria Guadalupe de Rodrigo, an Argentinean Missionary of the Institute of the Incarnate Word (IVE), who met with Alessandro Monteduro, Director of ACN-Italy, in the Rome office of the Papal Foundation this morning. “I was in Aleppo for a rest, and when the war broke out I realized that God wanted me there for a new mission,” the religious Sister began, who described a Christian community very different from those often lukewarm ones, which one encounters in Europe. “For Aleppo there are no Christians in name only, but Christian-witnesses, that is potential martyrs. Mothers ask the monks to tattoo the sign of the cross on the arms of their children and prepare them for the possibility of martyrdom. Young people are prepared, and they say that terrorists can take their lives, but not Heaven.”

Sister Maria Guadalupe reveals dangerous comprehension deficits, typical of European societies, saying that, “The Middle East cannot be assessed by Western standards, both with regard to policy, and as to the religious sphere.”  The ongoing conflict is peremptory: “It is not a civil war but an invasion of terrorists, persecution protagonists, above all against Christians.” The scenarios described by the Sister bring to mind the darkest pages of the twentieth century: “The persecution is open,” she insists, and “the truth it’s against minorities is also demonstrated by the fact that the forced conversion to Islam is being imposed on Christians who are abducted. The so-called rebels,” she points out, “are actually jihadist terrorists.”

“We can’t talk just about Aleppo East, because “in Aleppo West’s Christian districts, the population experiences what people call the “rain,” that is, rockets in massive quantities, a rain that intensifies during Christian holidays. In the city”– she continues – “only 25,000 Christians were living. The whole city is groaning from the embargo: It is no coincidence that local bishops have called for their removal, because it harms the population.” Her testimony is also a tough examination for European consciousness: “The Syrian refugees are disappointed by Europe. They thought they were “family,” in Christian Europe, and instead they found a closed continent, secularized. Added to this many are suffering from mistreatment by Islamic refugees,” while stating,  “such abuse comes from different Muslim nationalities rather than Syrian refugees, because with the Muslims in Syria, there have never been coexistence problems.” These Syrian refugees do not want to be refugees, on the contrary, “[they] want to return to Syria.” Sister Guadalupe has finally launched an appeal to the Italian Catholics: “Do not abandon us. Syrian Christians need first of all your prayers, to prepare for martyrdom, and then the financial aid. They teach us how to live as true Christians,” she concluded.

Aid to the Church in Need is an international Catholic charity under the guidance of the Holy Father. For more than half a century, we have been serving the persecuted and suffering Church around the world.

Each year, Aid to the Church in Need supports more than 5,000 projects in 145 countries across the globe.