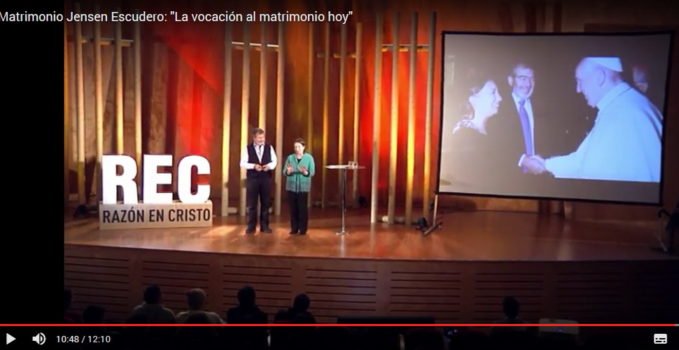 “The covenant of love and fidelity lived by the Holy Family of Nazareth illuminates the principle which gives shape to every family.” – Pilar and Luis Jensen in REC

Did you know that in Amoris Laetitia, the Pope speaks of the family from the aspect of the Covenant of Love?  If you do not, it is worth reading – or watch the testimony of Pilar and Luis Jensen in the video on REC, Razón en Cristo.

Two married people in the setting of an REC event were invited to give their testimony.  Stemming from their experience of thirty-five years of marriage, Pilar and Luis narrate on the vocation and mission of their marriage.

Due to their long experience in marriage preparation and in working with couples in crisis, they have been invited to participate in various ecclesiastical assemblies like the General Conference of the Latin American Episcopate in Aparecida, which took place in 2007.  In 2014, they were invited by Pope Francis to participate as auditors for the Synod on the Family, being one of fourteen marriages from the entire world present at the event.

Human love as a vocation from God

They began their testimony, relating the moment in which they met at the beach – both belonged to the Schoenstatt Youth – and of their marriage on the same day they completed their studies – yes, on the same day.

What they transmit is a simple and strong message: Human love as a vocation from God.  It is what they transmit when they prepare couples for marriage, and at this moment, that is what reaches their youthful audiences.  God is the one who calls, chooses, and accompanies this adventure of love.  They speak of the magical moment of falling in love, that moment that changes life in order to then discover and understand one another’s vocation with each other and for each other –a vocation that transforms itself into a mission.

They explain from here options arise, and they require decisions that not only involve boyfriend/girlfriend or the spouses, but their children and many other people.  Pilar says it clearly: “Lucho’s professional mission meant and means a demand of enormous time management flexibility, mobility, changing of plans.  Only if this is assumed as an integral and affirmed part of the marriage life and not as an attack on the same, can one live happily for thirty-five years and much more.”

They conclude narrating an encounter with Pope Francis, in June and in Rome, and their gratitude to him for Amoris Laetitia whose message is summed up masterfully:  Family is not a problem, it is a tremendous gift.  They encourage the reading of Amoris Laetitia, to read it many times and deeply, ending with the quote we mentioned at the beginning of this article:

“The covenant of love and fidelity lived by the Holy Family of Nazareth illuminates the principle which gives shape to every family, and enables it better to face the vicissitudes of life and history. On this basis, every family, despite its weaknesses, can become a light in the darkness of the world.” (Amoris Laetitia 66)

“Great REC and Vicente’s testimony, brilliant.  I have needed time for the emotions to rest some.  It is impressive how the Lord makes salvation history with small decisions and concrete acts in daily life.  The mission of these youths in Cuba is a salvation event for many, also for them.  I am a witness.  Schoenstatt has an invaluable gift for Cuba, we only have to show it… and Cuba has her place and mission within the Schoenstatt Family.  Providence will reveal the how and the times” – comment from Fr. Rolando Montes after seeing the video via schoenstatt.org, REC video with Vicente Jaramillo’s testimony, a Chilean youth who went as missionary to Cuba.

REC and schoenstatt.org in covenant: a proposal raised to those in charge of REC after publishing the first video offered by REC on schoenstatt.org.  Covenant in solidarity – or better said, to collaborate without competing, to mutually help oneself, to do something so that the mission of another can be fulfilled. Moreover so that together we can take the Good News to the digital world, in the joy of the Gospel – an accepted proposal.

“We do not have in mind something specific or legal nor anything like that, but to converse as we are able, to help each other mutually with the ultimate aim of being able to take the message of Christ to many more people.  That they help us to publicize Schoenstatters’ talks is already a big help, and we are most grateful.  In the next few days, we will be uploading some news from Schoenstatters that we are sure you will be interested in.

On the other hand, we are always open to carrying out events +REC (outside the UC and DUOC), in conjunction with other institutions or groups where we help them in the organization of the group, in case they are interested in organizing a group.

Testimonies of powerful faith that could inspire other people

We are also always open to receive ideas from powerful speakers who have a testimony of powerful faith, which could inspire other people to live faith and the message of the love of Christ.  There are many stories and testimonies of faith which are unknown to the world and which could be worked through to help build a precise and inspiring message.  Those unknown stories are the ones that we are constantly looking for, and therefore we are open to ideas.  The wider the web presence, we will be able to find more people, and we will be able to reach more people.  For now, those are the ideas that come to mind in our covenant,” is the answer of those responsible.  Evangelizing synergy.

Kiki Tagle, schoenstatt.org’s oldest collaborator, relates a special story: “I have been absent for a few days because my computer was not working.  They fixed it today, and I immediately saw the wonderful and touching “News.”  My joy was great when I saw REC in Chile.  It is the work of my grandson, Guillermo Tagle, who is presently the Director of Ministry at Catholic University.  He started it about three years ago.  Today I learned that another grandson, Miguel, in his second year at the University, is his secretary.  I am so proud of how apostolic my grandsons are.”  With reason, Kiki.  With “Razón en Cristo.”

With Christ and a talk at the same time

REC (acronym for Razón en Cristo [Reason in Christ]) is a project that seeks to transmit Christian values by means of brief talks available on the Internet.  Its dissemination is carried out by means of social media, thus seeking a new form of evangelization with the aim of changing consciousness and impacting society in a positive way.  This initiative emerged in 2014 and forms part of the Ministry of the Pontifical Catholic University of Chile in conjunction with the Ministry of DUOC UC.

These talks are recorded on different REC and +REC (outside UC and DUOC) events organized during the year and then downloaded to the REC website (www.rec.cl) for mass-production and taken to thousands of people.

With Christ and a talk at the same time, we want to build a more human society, more integrated and more committed.