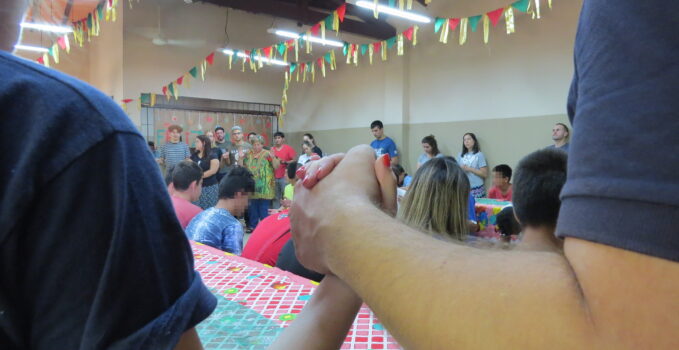 If December is a month of parties, farewells and other festivities…. unfortunately, sometimes we forget the deeper and original meaning of this feast.  And on the other hand, we also forget those who have no idea of what Christmas is.  It is the sixth year for those of us who make up the jail ministry “Mary’s visitation.”  We do remember the meaning of this feast and we remember, and we take care of those who many have forgotten.— 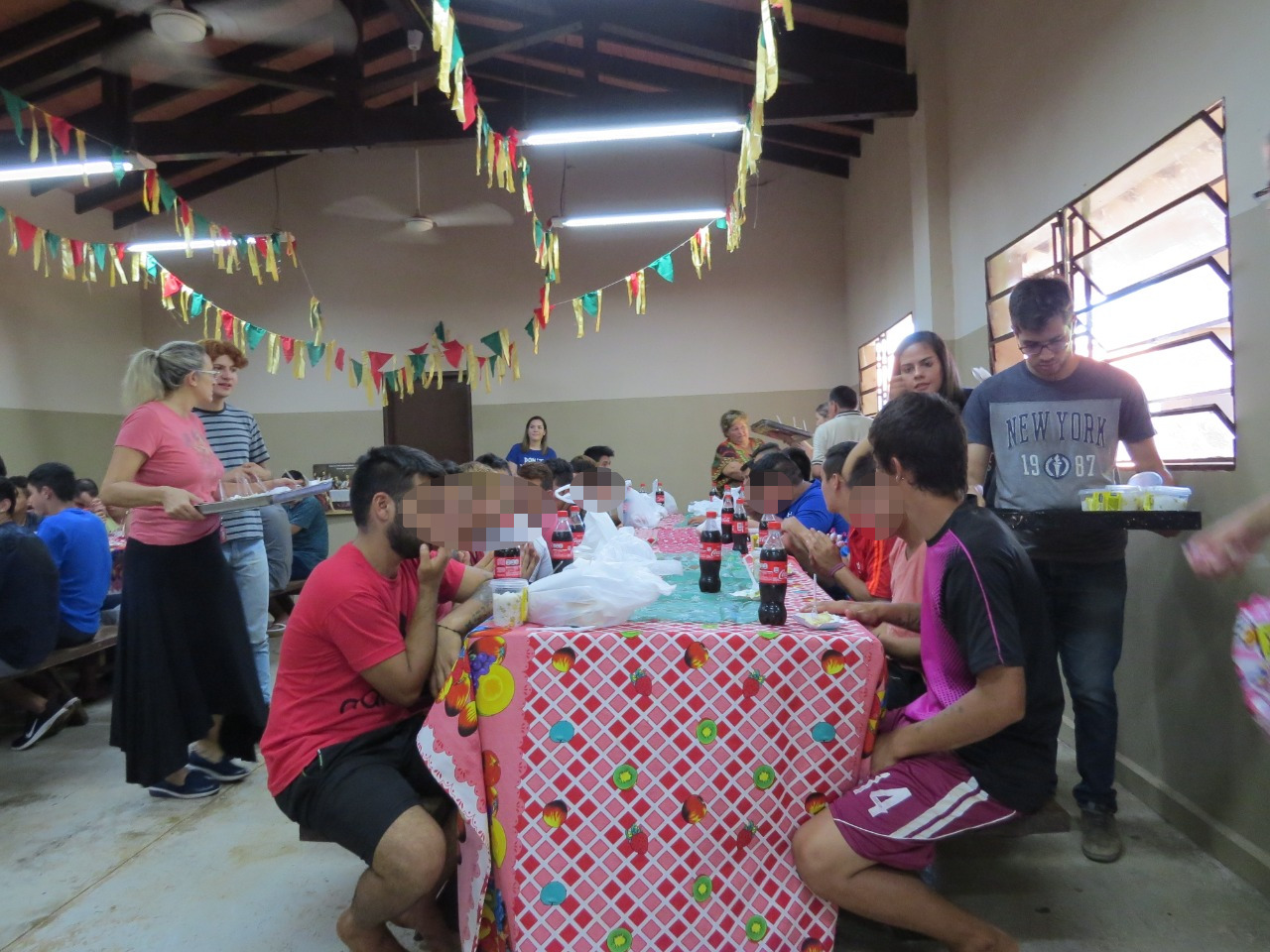 “They are going to come to see us, precisely at Christmas!”

Along with Fr. Pedro, each one of us, at the beginning of December, begins our campaign “Christmas Dinner in Solidarity,” which is nothing more than gathering donations in order to take a plate of food, some dessert and a fizzy drink along with some little gift for the youths and adolescents detained in the educational centers of Itaugua and La Esperanza on Christmas Eve.

For several Saturdays, we ask the boys and girls to pray for all those who have been collaborating for this dinner and we remind them that on the 24th and 25th, we will be with them.  Of course, never lacking is the incredulous “new” one who says to his companions softly in Guaraní: “They are going to come to see us, precisely at Christmas!”

Since the beginning of the campaign, every year we feel the blessing of God and the protective hand of Mary in each donation, in the preparations and in the heartening words of many generous souls who have given their “yes” to this campaign.

All the collaborators together

The previous days had already been very touching.  And on the day, already since the morning, Blessed Mother had prepared some gifts for us. 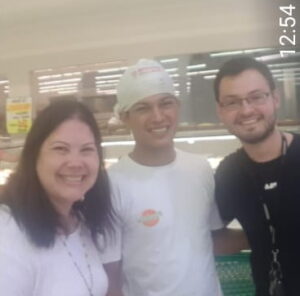 When we went to the supermarket looking for the bread for the dinner, we met Sergio working in the bakery – two years ago we met him at the Education Center of Itaugua.  When he was finally able to exit freely, he decided to change his life and he entered the post-jail program at “House Mother of Tuparenda.”  He completed the program there and today he is working with dignity.  It was a beautiful gift knowing that the bread for the dinner was made by someone who had been one of them, one who knew what it meant to spend Christmas in a detainment center.

Next time in House Mother of Tuparenda

Already in Itaugua, the festivity was almost ready, decorations, music, food…. all of this taking place before the curious eyes of the boys and girls who were anxious to know what we had prepared for them.

We received each group with singing, applause and many hugs.  They were the guests of honor that day!  As they entered the dining room, some had faces of astonishment, others had faces of immense happiness, but all were ready to enjoy what was for them a true banquet.

For a while, I sat with Pepito and between tears and hugs he tells me, “Here I am again, auntie, but no more, that is enough, I don’t want this kind of life anymore!”  We’ve lost count of how many Christmases he has spent here, but as to the question of where will I see him next time, he answers that it will be in House, Mother of Tuparenda:  “I have already made a deal with Father Pedro.” 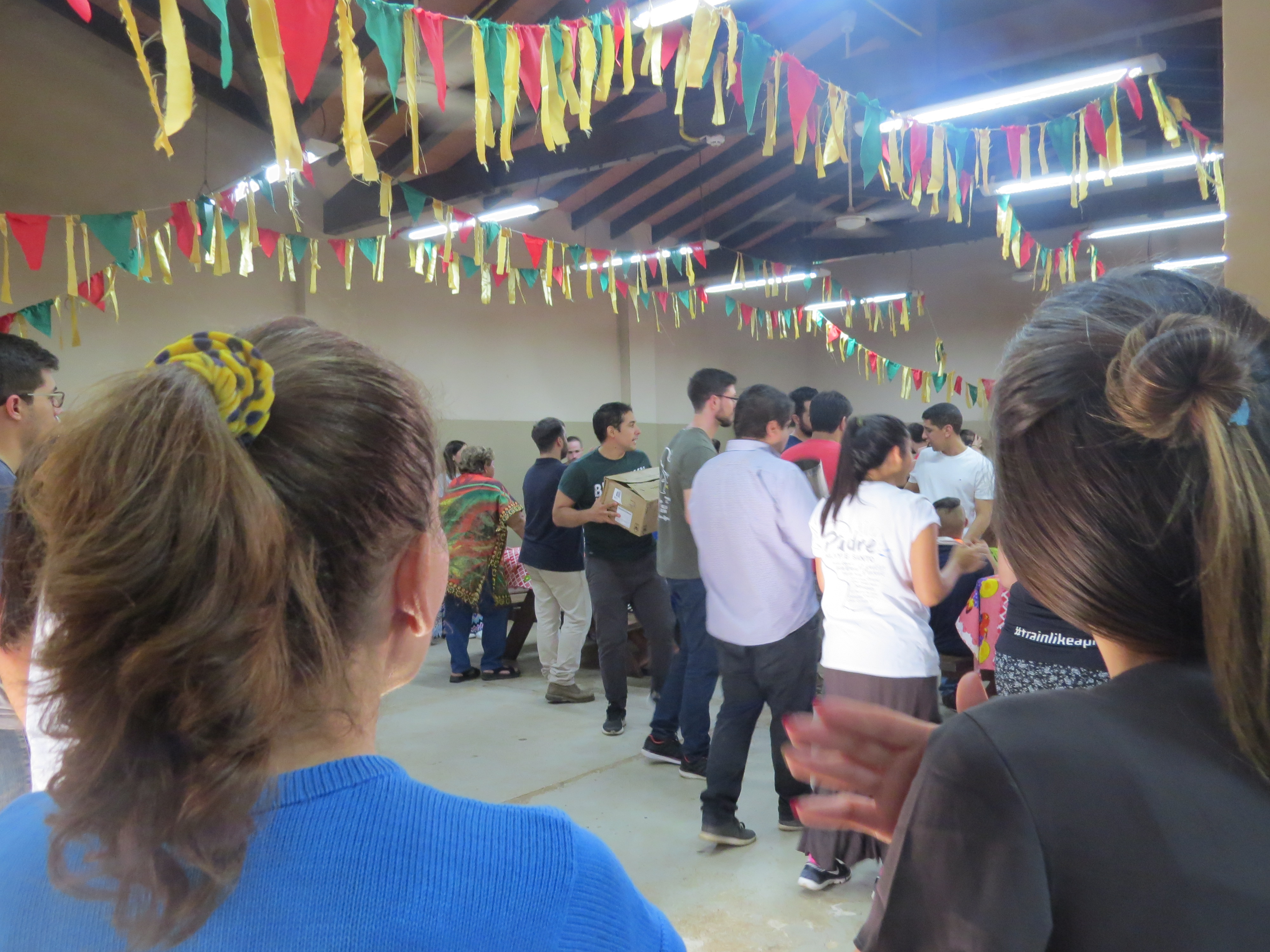 We saw many walls of pride collapse when faced with the power of a hug, an embrace.  Some who always appeared hard, domineering, “hard-headed” as we say over here, succumbed to the love of Jesus and Mary who were in each detail, in each song, in each hug.

Many of them had never seen a table with a tablecloth, never seen a Christmas dinner, they spent their Christmas Eves in the street or if they were at home, perhaps the only things abundant were alcohol and drugs.

A Christmas message via radio

The educators could not be exempt from this festivity.  At a given moment, I approached one of them and  asked him if all of them who had a radio (that is how they communicate among  themselves), those who are within the establishment and those who take care of the outside  area, have the same channel.  When he told me they did, I asked if it were possible for Fr. Pedro to say a few words to all of them via the radio.  With the positive response at hand and without losing any more time, I asked Father if it would not be inconvenient for him to give a message via radio.  I thought it was a good idea.  We could not leave them outside of the festivity, they who take care of the young men.  And thus, was the culminating point, in a very special way, Fr. Pedro thanked all the educators and outside guards and he gave them the blessing.  Without them, without their willingness, the little we do would not be possible, besides, if they are ok, the young men will be ok. 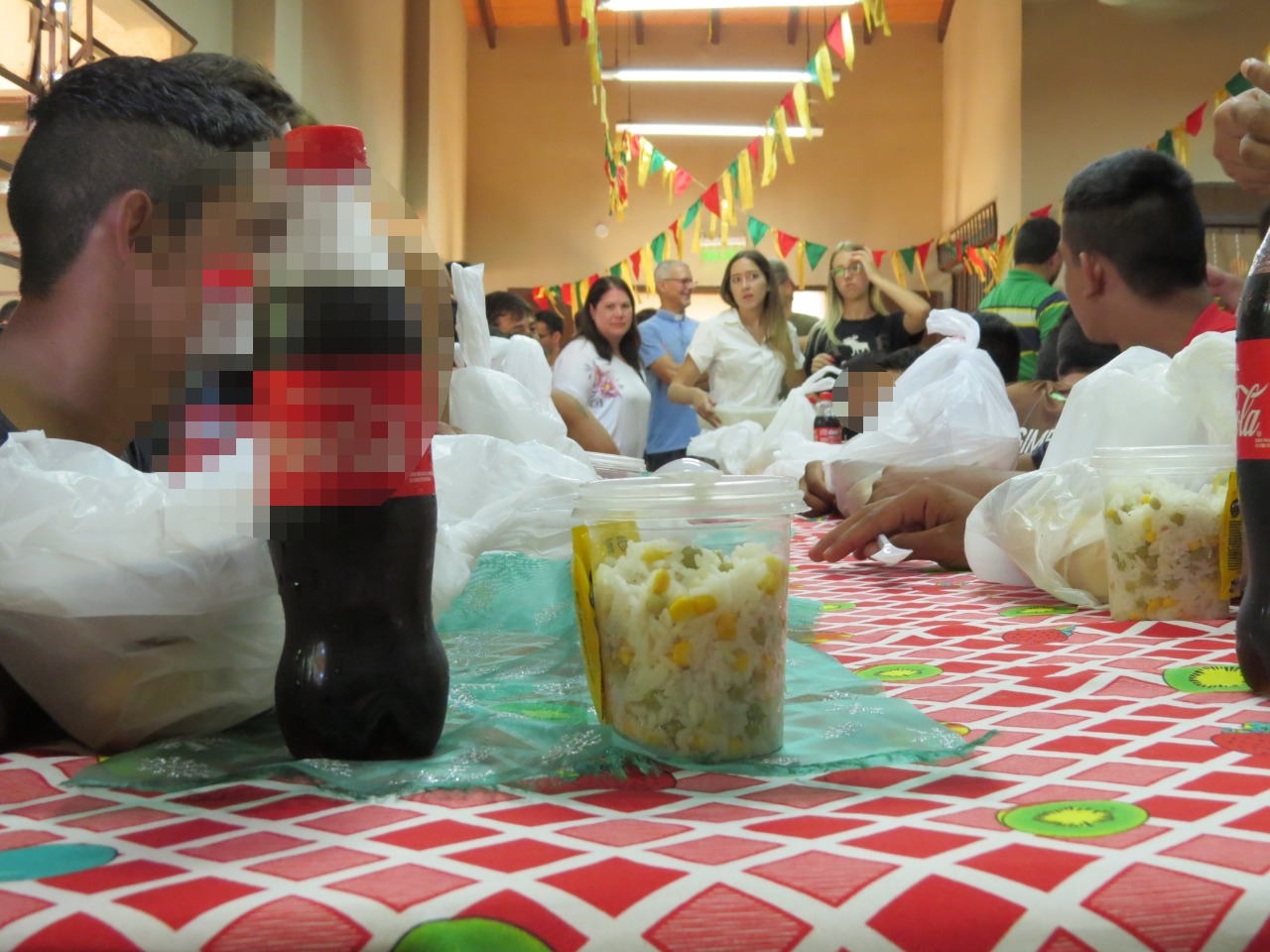 We lived the true Christmas

We all ended the day more than happy, we prayed, we sang, we gave thanks for so many blessings, that even though they are not so tangible, they are many.  To know that we can offer a day of so much happiness, of so much mercy and love with so little, really fills our hearts.  Today we are only casting some seeds into the wind.  God knows where they may land, but we have the certainty this His time is perfect, and the fruitfulness will arrive sooner than later.

What we experienced on December 24th and 25th, is nothing more than the true presence of the Child Jesus, Emmanuel, the God with us, more present than ever in a place which many have forgotten.

Jesus is born and makes Himself present there, in the simple but sincere prayer, in the long and silent embraces, in the joy of singing, sharing laughing and crying.  It may seem like little, but for those who have nothing, it is a lot. 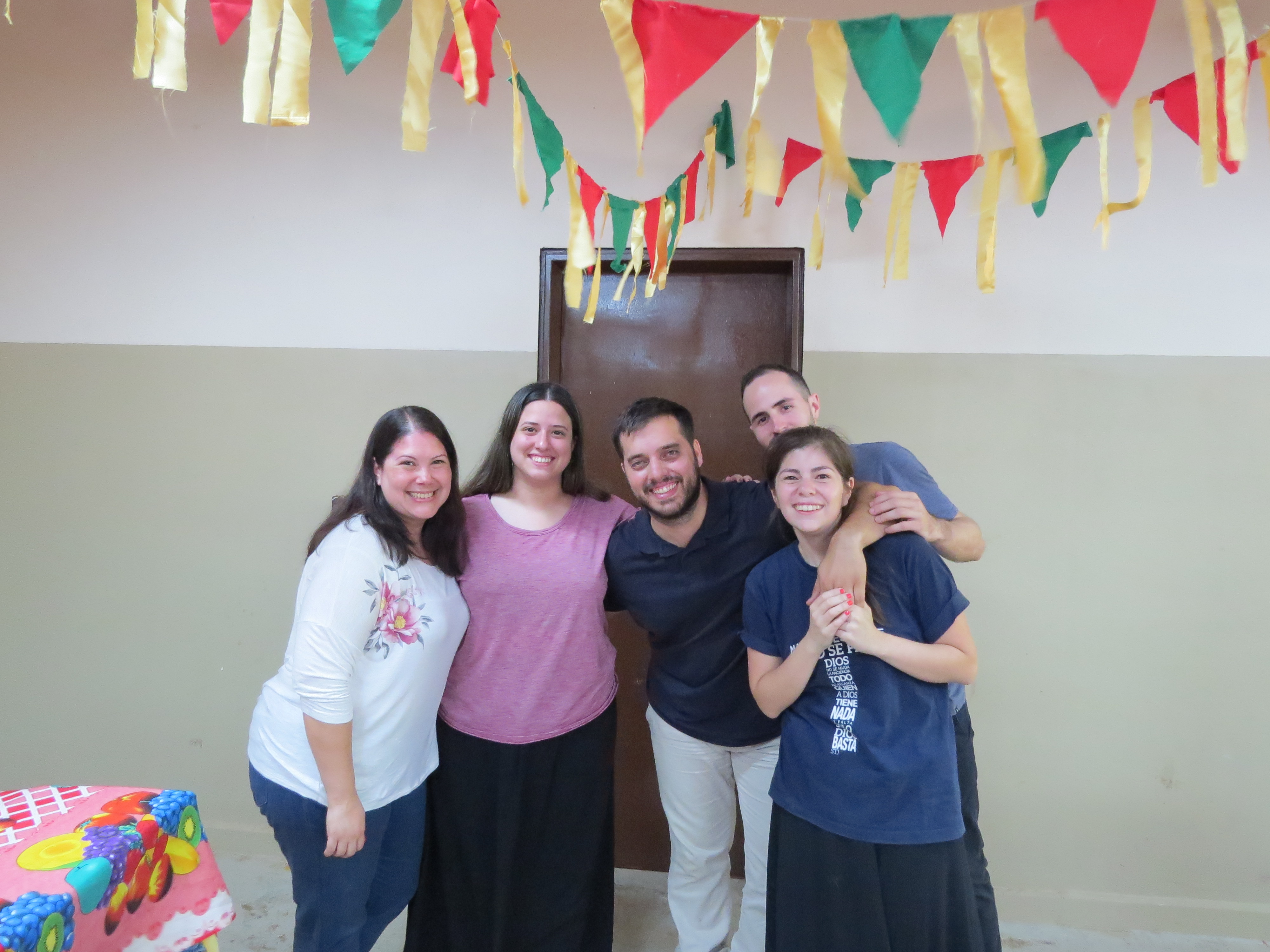 Cristy Santa Cruz,  author, with some of the collaborators

Do you want to be a part of this mission?  Would you like to donate a Saturday snack?