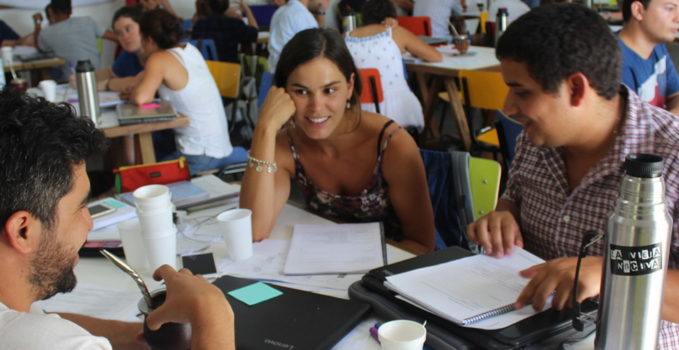 Studying the probability that Uruguay will win the World Soccer Cup? Creating a political consulting firm? At first glance, these do not seem like Schoenstatt projects, but they will be some of the subjects that are very pertinent to Uruguayan culture, which will allow Project Based Learning (PBL) in Providencia Center in Montevideo’s educational programs. What is it? What benefit will it have? How is this related to Fr. Joseph Kentenich’s pedagogy? —

Providencia Educational Center is a lay project of the Schoenstatt Movement from Montevideo, that “wants to deepen educational work being carried out by seeking methodologies that facilitate learning,” Luis Arocha, general director of Providencia, commented.

In the middle of 2017, teachers participated in three workshops to learn about LBP methodology; Dr. of Education, Rosina Pérez Aguirre, presented them. “Basically, it is about the young child developing core skills and abilities that will accompany them throughout life, and that will allow them to continue to be learners, in any context, and in every instance,” Patricia Orlando, coordinator of the Children’s Club, commented.

This year Rosina Pérez Aguirre and her team, who will also be following the implementation of the projects throughout the year, carried out deeper training.

Here 14 years of school are not only obvious; they must be motivated

“We have many classes with children that are not very motivated to continue studying. Within our milieu, the demand for finishing fourteen years of schooling is not obvious. It is important for us to work in such a way that will interest and motivate our students,” Luis added.

At school and in the Children’s Club, facilitators of the Catholic University implemented ten projects followed by other projects that coordinators of every program will accompany.

“In the majority of the projects, the teachers will meet to craft and to design them, articulating the content of the different assignments. Rosina Pérez Aguirre and the team of facilitators left happy because they noted that we have a very creative team,” Luis Arocha commented.

In preparation for this work methodology, consulting with the work of specialists such as John Larmer, who expressed: “The teachers should plan a project focused on the knowledge of importance and relevant concepts. In the same way, the content should reflect what the teacher considers is essential to know about the subject. And the students should find the content meaningful for their own lives as well as their interests.”   (Essential Elements for Learning–John Larmer–Buck Institute for Education, 2014).

Some examples of projects created by our educators

In school, the third-grade math teachers crafted a project based on the Soccer World Cup. In the project, the students have to support and demonstrate which team has the greatest possibility of winning the World Cup. To arrive to this conclusion, they have to study, for example, the factors that make a winning team, to study the history of the World Cups, i.e., which teams won, and in what context, and analyzing Russia as a country, weather factors, among other things. During the process, the teachers will accompany the investigation and they will work on certain related content. “This is a project that we crafted jointly with Sabrina, the other third grade math teacher,” Fiorella Aldabalde, Mathematics professor, explained. “The main subject that we will work on is probability. The students will investigate the mathematical probability that a team will win the championship, but we will also study what other factors influence this result.”

“A political consulting firm for the elections”

Another project example, which in this case will be implemented by the Children’s Club, refers to participation. “They have to create a political consulting firm and within the framework of the election of delegates, and through surveys, they will try to make the opinions of the electorate and the proposals of the candidates known and analyzed,” Luis explained.

They will prepare a report with the opinions of the electorate that will be presented to the candidates for delegates so that they can craft their political platform: and at the same time, analyze for the electorate the different proposals the candidates for delegates have. “In the final product, they have to present graphics, statistics, and probabilities. They will work on the concept of participation and methodology of investigation,” Luis added.

Providence seeks to deepen on the path toward an education in which the students generate meaningful learning and can enjoy their educational experience.

We already learned something from this method of new ideas for the twenty-first century, haven’t we? Let us recall that great teacher, Jesus, who sent his disciples that liked being close to him so much, listening to him and enjoying his classes, to carry out a project. He sent them two by two, to preach, to visit, to heal, to make their experiences in the world real. They returned tired and with many lessons that were learned forever.

There was also Joseph Kentenich, who a little more than 100 years ago, sent his students that liked being close to him, listening to him and enjoying his classes, to carry out a project. First he sent them to Koblenz, Germany, to speak about the commitment to Jesus, and then into the trenches of World War I, not only to survive, but to announce, preach with their lives, to visit, to heal, to make the experience of the Covenant of Love in the world real, and to be at the service of man and their fellowmen that suffered. They returned tired but with many lessons that were learned forever.

We know it. That is how we learn. But sometimes we forget, how as a Church, as a Movement. Schoenstatt reaching out is not a trip with words: covenant culture is not just smiling at another Schoenstatter.

Thank you, Providencia for reminding us how to learn with projects at this moment in history.

Learn with Schoenstatt projects?  Here there some so you can choose your favorite: