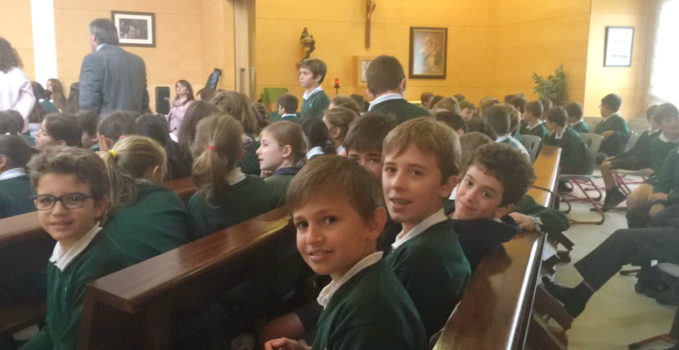 October 18, 2016 – Tenth Anniversary of the Mount Tabor School in Madrid

With a festive Mass, on 18 October 2016, the tenth anniversary of the Mount Tabor School in Madrid was celebrated.  This is an educational  center created by families for the family.  It offers education to students from 2 to 18 years of age.  It is inspired by the pedagogy of Father Joseph Kentenich and develops a different form of education.

Father Juan Barbudo presided at the Mass and concelebrating were: Fr. Jaime Vivancos, Fr. Carlos Padilla, Fr. José María García, the community of the Schoenstatt Fathers, and Fr. Diogo Barata, Superior of the Schoenstatt Fathers in Spain.  Fr. D. Pablo Salvatierra, pastor of the parish where the school is located, was also present.  The entire board of directors, several city leaders from Pozuelo de Alarcón, the board of trustees, the previous directors and assistant directors and Sr. Mónica María representing the Schoenstatt Sisters of Mary, shared this moment with many people that for many years have formed part of the great Mount Tabor family.

On this day, the School received two great gifts: one is a prominent picture of the front of the Shrine, along with the Blessed Trinity and the Blessed Mother.  It is a symbol of the Covenant of Love, which Father Kentenich sealed with the Blessed Mother on October 18, 1914, and the community of the Schoenstatt Fathers donated it to the School.  The other is an olive tree located in the central patio and which symbolizes the life generated in the School.  It is at the place where, at the end of the course of studies, we will place the sculpture of the Holy Family that will be striven for with contributions to the Treasury of Grace during the year.

At the end of the Mass, the Board of Directors handed out the Alvaro Ussía awards for Values, Efforts and Academic Achievements.  In conclusion, all sang a great Happy Birthday, blew out the candles on the cake and sang the school’s alma mater hymn with great enthusiasm and power. 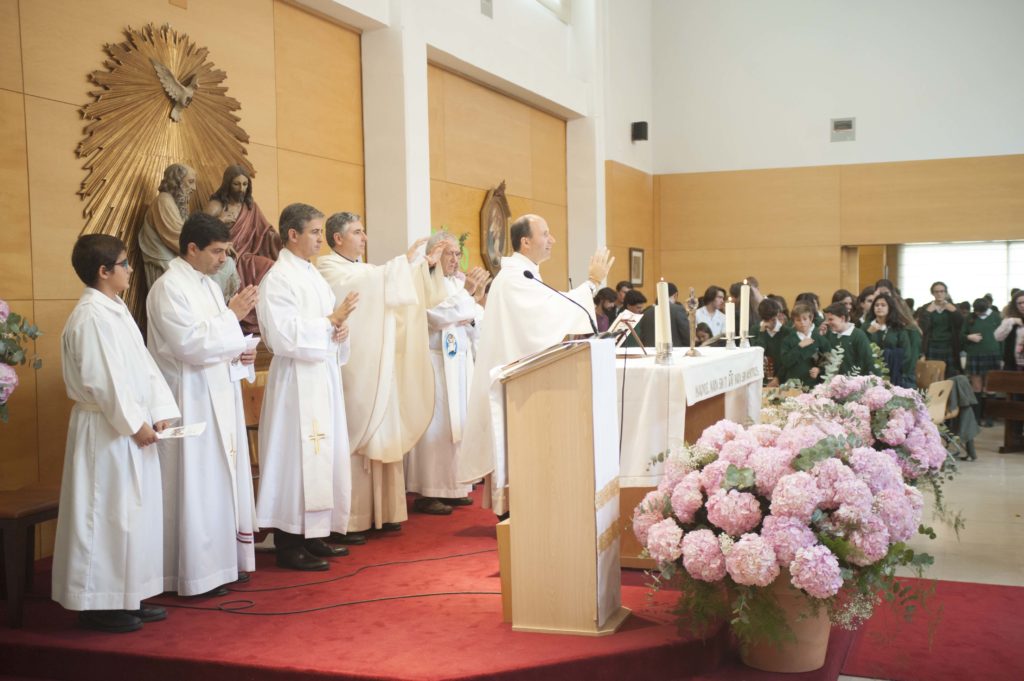 Carlos Sainz de los Terreros, one of the founders of the project, on the occasion of the anniversary, relates the journey traveled

Today, 18 October 2016, is the 10th anniversary of the inauguration of Mount Tabor Schoenstatt School in Madrid.  It is a proper date for looking back and remembering how this project and the most important moments developed, even to clarify the happy truth into which it has grown to almost 1,000 boys and girls, 700 families, 500 former students, and almost 100 hundred people working at the School are only a part of the profound impact that the School has had and will have on the Schoenstatt Movement of Madrid and in society in general.  It is not possible to make an exhaustive relationship of all the people who have unselfishly collaborated on the project, so in advance I apologize if I leave anyone out.  You are all in our heart and you are, or have been, crucial so that our School, which belongs to everyone, becomes what it is today and what it represents for many people. 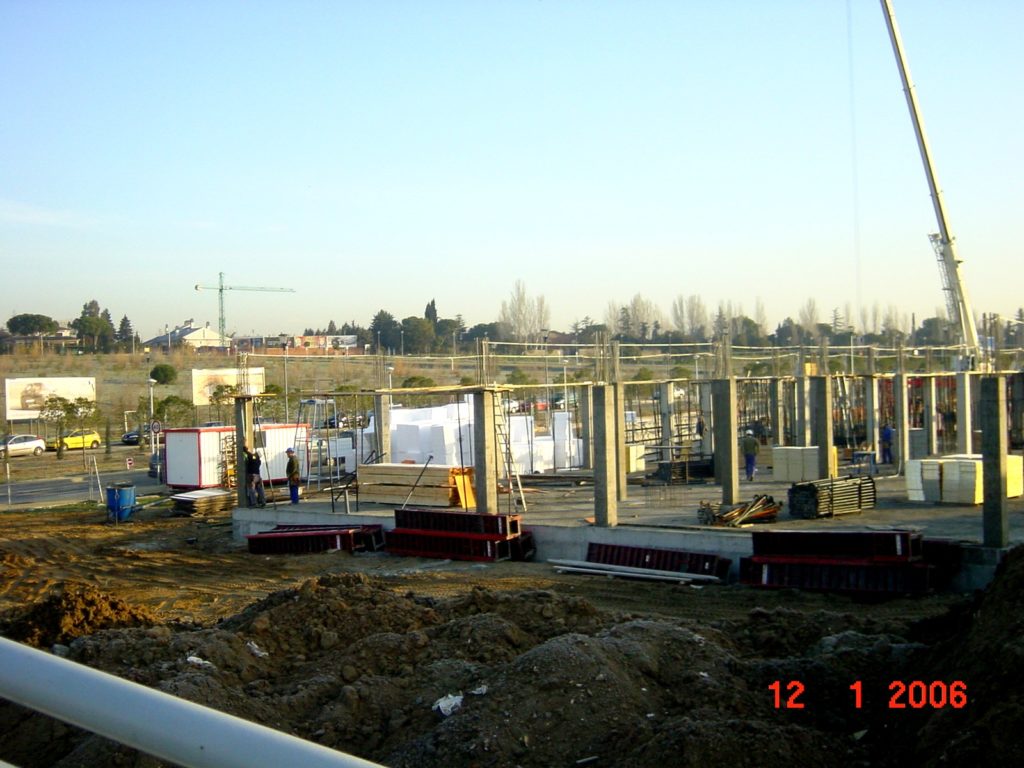 Mount Tabor School emerged from the combined impulse of the Schoenstatt Fathers and the families of the Family Federation, constituted into the MTA Civic Association along with other families from the Family League and the Family Institute.  I remember the day clearly, 18 October 2001, when, along with Ambrosio and Fr. Patricio, we traveled to Valdepeñas to sign the constitution of the Newest Times Foundation in the law office of Alvaro Obando.  We were motivated by the illusion of making known and extending, as wide as possible in Spanish society, the message and the pedagogy of our Father and Founder, but we were not very clear on how to do it.  Regardless, we were professionals in our own right, but ignorant of these proceedings.

We counted on the help of Blessed Mother and we placed our project into her hands, trusting that she would guide us along the way.  It was the beginning of a period of five years of ideas, attempts, successes and failures and, definitely, of search and consolidation of the final project.  I still feel the nostalgia of those Board of Trustees’ working breakfasts, to which another Carlos (Cremades) had joined in our “office,” which was nothing more than another cafeteria nearby at the house of the Fathers in Serrano, before leaving for our respective jobs.  On those occasions, we would discuss the most varied initiatives, not all accurate, but God wanted would happily culminate on that first day of class in the School on September of 2006, when the first students entered the Mount Tabor-Schoenstatt School, still smelling of fresh paint. 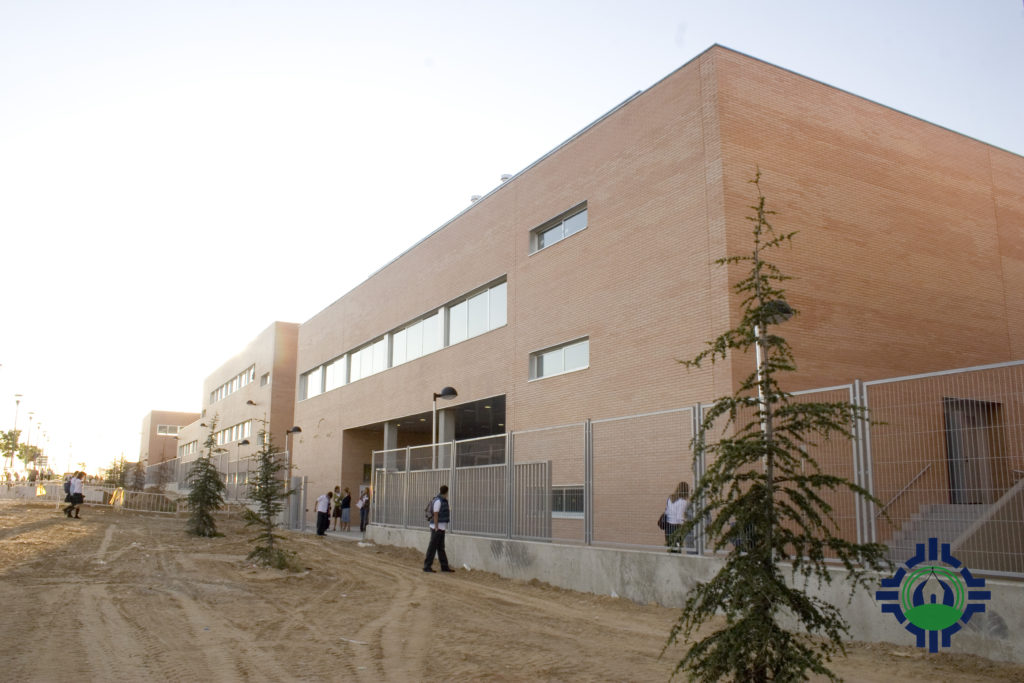 It is Mary’s project

Without wanting to be exhaustive with the steps taken and the difficulties which came forth along the way, one thing we had clear from the beginning:  it was a project of our Mother’s and we were her instruments for carrying it out successfully.  We are witnesses to her interventions during the years, which can only be explained from a firm conviction in Divine Providence.

I mention some important milestones:

Without forgetting the intervening and political persecutions in the months prior to the opening which, in spite of their hardness and tenacity or precisely because of them, had the positive effect of making it known and making very clear our educational proposal as a concerted Catholic school.  I have no doubt that it contributed in attracting many families to the School.

Also deep in our memory is the kiosk in which Bárbara, Sonsoles, Marta, Mónica, Ana…..were able to transmit their passion and “sell” to 600 families an entire school in which at that time it was only a lot with two cranes.  And many other moments which cannot be mentioned here and which served to demonstrate to us that, without a patroness like the one we have in Heaven, we would have remained only halfway on the journey. 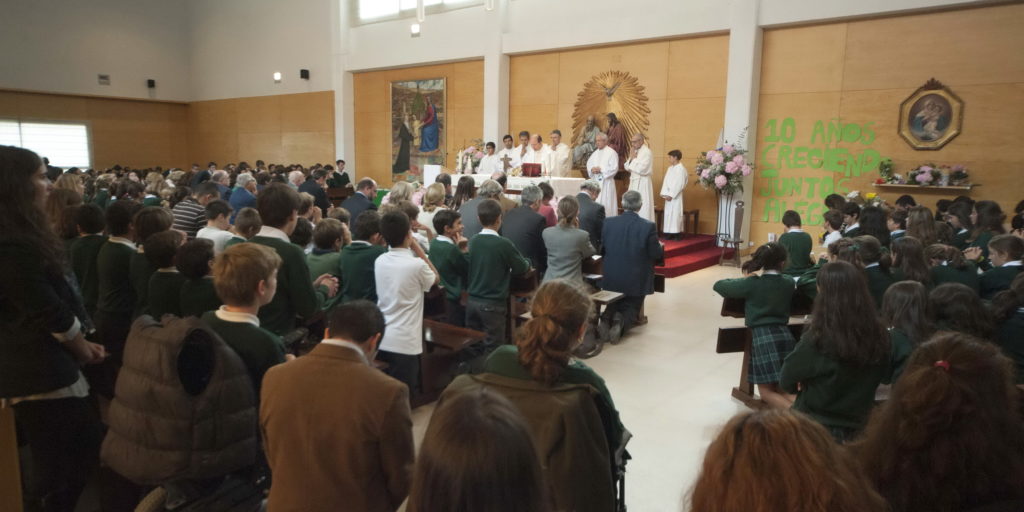 Moments we will never forget

We always felt the support of the Schoenstatt Fathers and the Movement in general, and we also learned valuable lessons from those who were opposed.  But only from a Providential conviction can one understand that we have arrived at this anniversary, with a consolidated school, fully operational, demanded by the parents and in which the charism and pedagogy of Father Kentenich is reflected in the daily education.  Nevertheless we are aware that this last act is a process of growth and continuous learning of which we will never feel totally satisfied.

Only after two years after beginning, the reaction of the school as a whole when facing the murder of a student, Alvaro Ussía, was an example of integrity, forgiveness and Christian attitude when facing pain.  And within the deep concern we felt, it made us feel very proud of our students, parents and teachers.

Finally, after eight years from the initial beginning, we were able to crown the Blessed Mother as Queen of the School on the 31 May 2014, through a process of striving during a complete course of study in which students, parents, school personnel and the board of trustees participated.  We are certain that we can count on her to continue protecting her work. 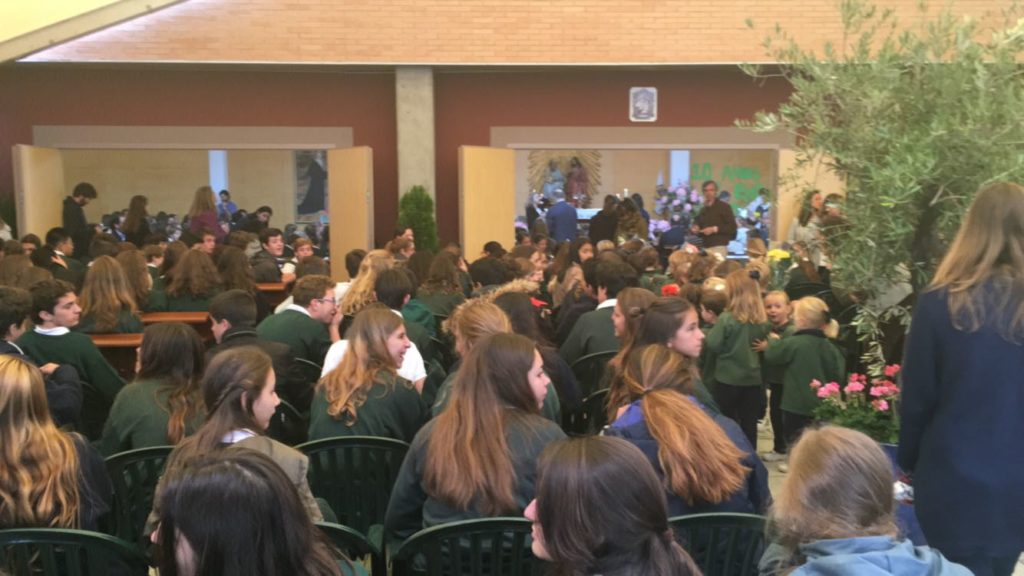 Speaking for some time with Sonsoles about our life, of what was important and what was not, of work, children etc.–we agreed that our family and the school were, without a doubt, our two missions to which it has been worthwhile to dedicate our best efforts , although the results of both remain, like all, in the hands of God.

I do not want to end here without leaving proof of our thanksgiving to all the school’s personnel, to many collaborators from the beginning and others who are no longer at the institution, who with their enthusiasm, professionalism and dedication have made possible the splendid reality of what Mount Tabor School is today.  Also to the people who believed in the project when it was little less than a dream, generously contributing their time, money or whatever type of help they gave to advance and overcome the obstacles along the way.  Especially, to all the families who entrusted to us what was most precious to them: the education of their children, the only and true objective of our school, and to whom we expect to never defraud.