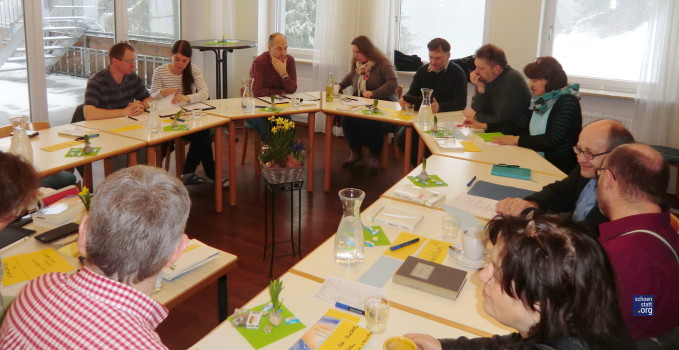 Around the Table: (more than) a Conference Method according to Kentenich

The mission statement of the IKAF (International Kentenich Academy for Leaders) states, among other things, “Genuine love of God, which should burn within us, gives us a new vision, a new understanding …”

This “new understanding” shone out in a special way during the IKAF weekend at the beginning of March in Memholz, Germany. Based on very different actual situations we could clearly feel that as a team – in the plenary sessions – we could strengthen and enrich each other through the charisms and experiences of each individual participant. In the method of working, which has become typical of the IKAF, we could experience that throughout the weekend we were centering on God in everyday life. This way of working has been copied from Fr Kentenich’s style, and is called “around the table”. We could also say that it is the communication style Fr Kentenich developed as a model exactly a hundred years ago in the MTA magazine, but applied as a conference method. Mutual inspirations from actual life working for the ideal of organic business management in our present time.

One participant related an experience, an observation, a story, and together we looked for and found God’s voice in it. … 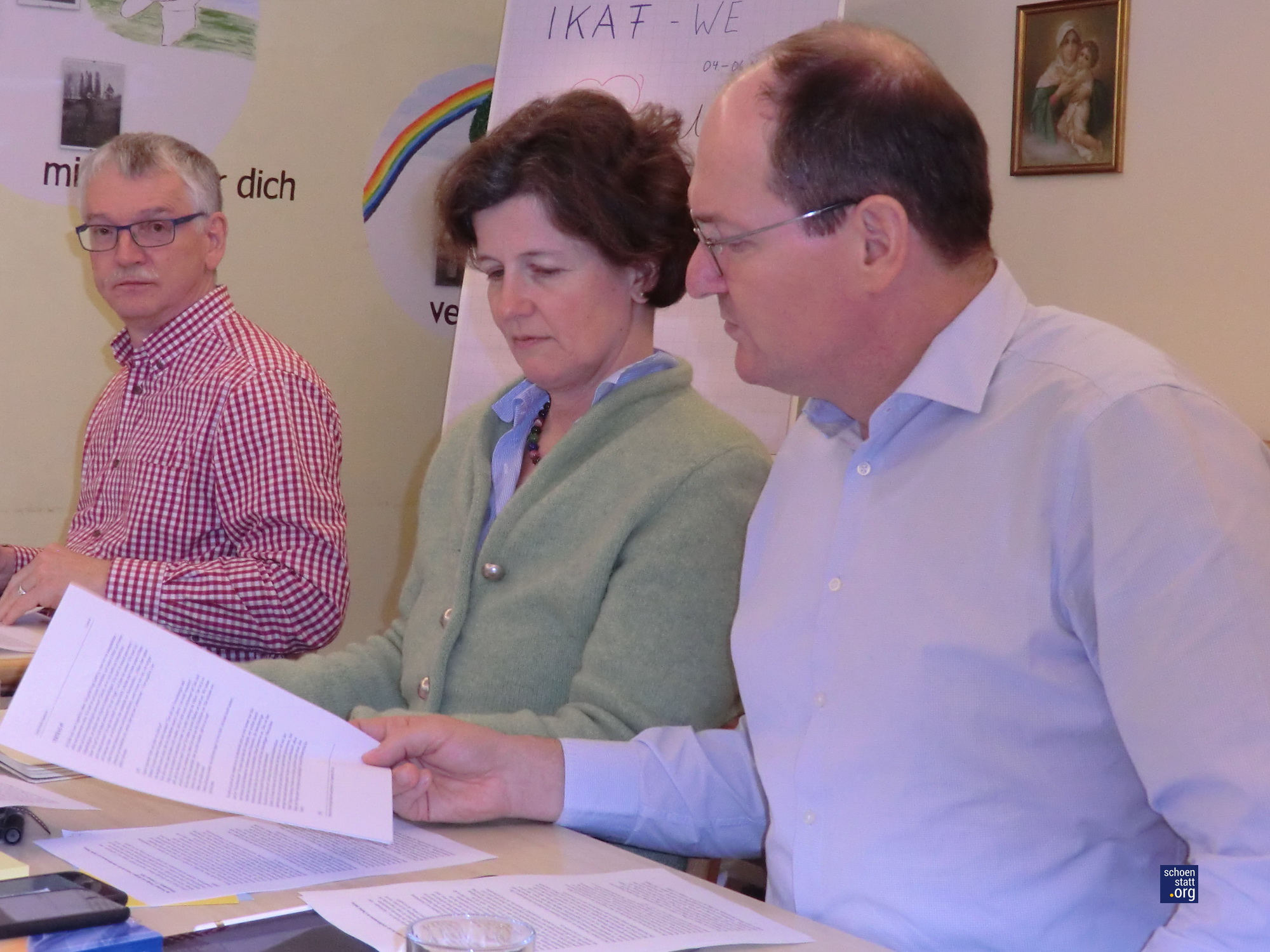 The most important thing is ‘social’

A preparatory team met to work out a motto. To start with there is a time for coffee and snacks – arrival, exchange, anything new? A positive climate is created. The actual work only begins three-quarters of an hour later, but then in a good atmosphere. The observation was that the work was more concentrated, more intense, better and quicker than at other times, and this was traced back to the good climate that was created to start with. Also those who arrived a bit late, because they had been held up in heavy traffic, were able to “arrive” and join in – being late didn’t matter. Sr Carol, who had worked a great deal with Fr Kentenich, said that he had once told her, “The most important thing is social”. 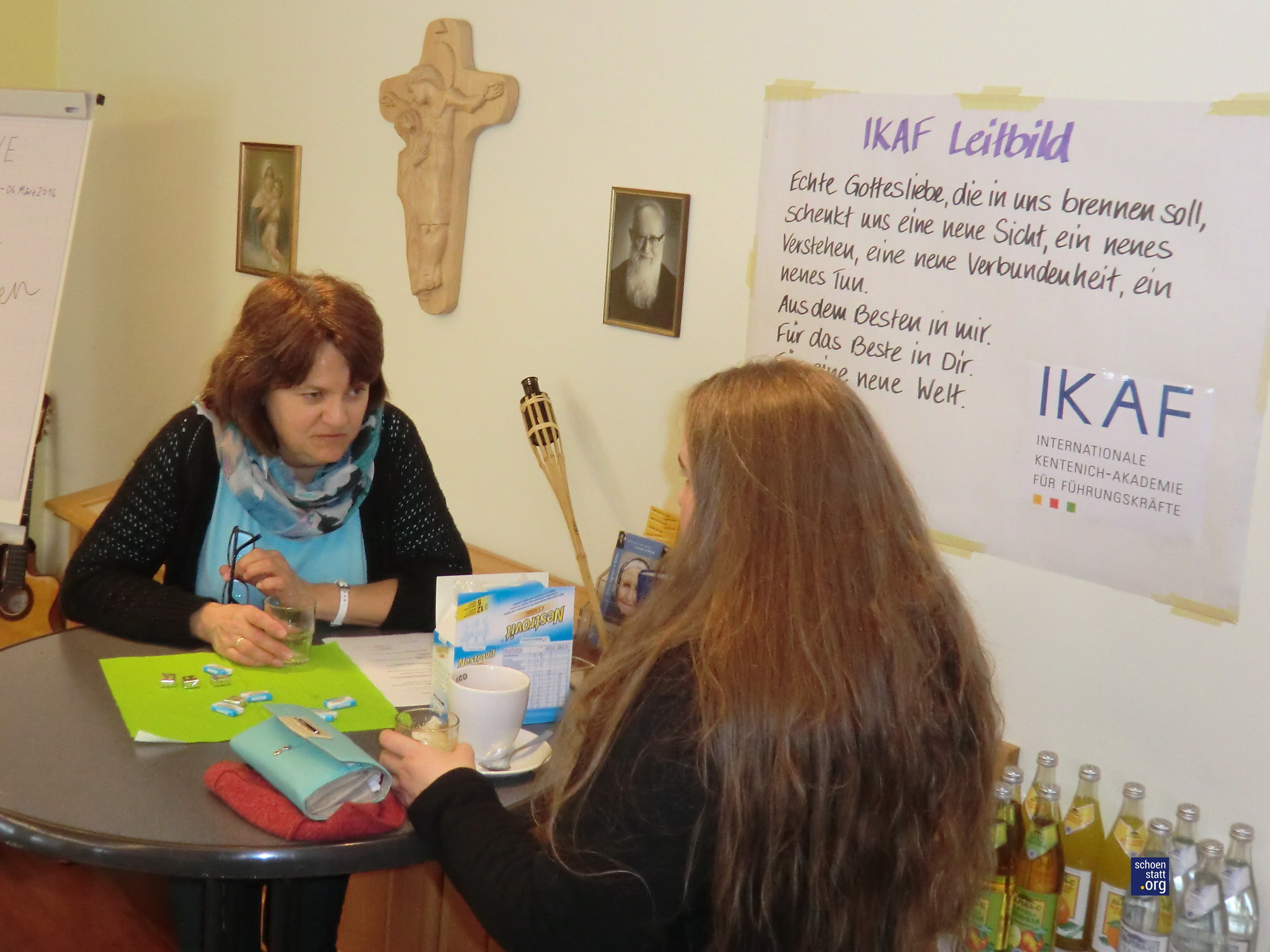 Conversations during the breaks are also working time

At the end of a workshop in a business, each member was asked to write down what they had liked the most, and what they would take along with them. One member elbowed his neighbour and said, “The breaks were the best!” Breaks when they were simply together without having to work and without pressure, but with joy. Many still continued to work on the subject, but in a more relaxed atmosphere. A whole range of subjects was handled in this way.

Through this relaxed gathering much more was awakened, also with regard to content, as well as in creating a climate. The insight: that conversations during breaks could also be valuable working time. So don’t always separate breaks in a mechanistic way from working time. However, it is not easy to explain the value of conversations during breaks, or the value of the social milieu, rationally. You need to experience the effect of being “social”.

A young man attended a core team meeting. To start with, the gathering was relaxed, and it was noticeable that the man was constantly looking at his watch – if not always his wristwatch, but at least his inner “clock”. Then he remarked, “Actually we should be working; when do we start?” Only later, when he had cottoned onto this way of working, he realised on his own that the group had already been working, and had been very productive, but joyful.

One participant took along from the weekend that he wanted to put a bar table in his office or the passage in order to be able to conduct working meetings in another atmosphere. Other ideas were: Chocolates as “nourishment for the nerves” on the table, a small table decoration to create a good atmosphere, biscuits at the start, we tell each other about the successes of the past week, etc.

You can’t command people to relax, but we can create the climate in which they can do so. Time for a break is valuable time. 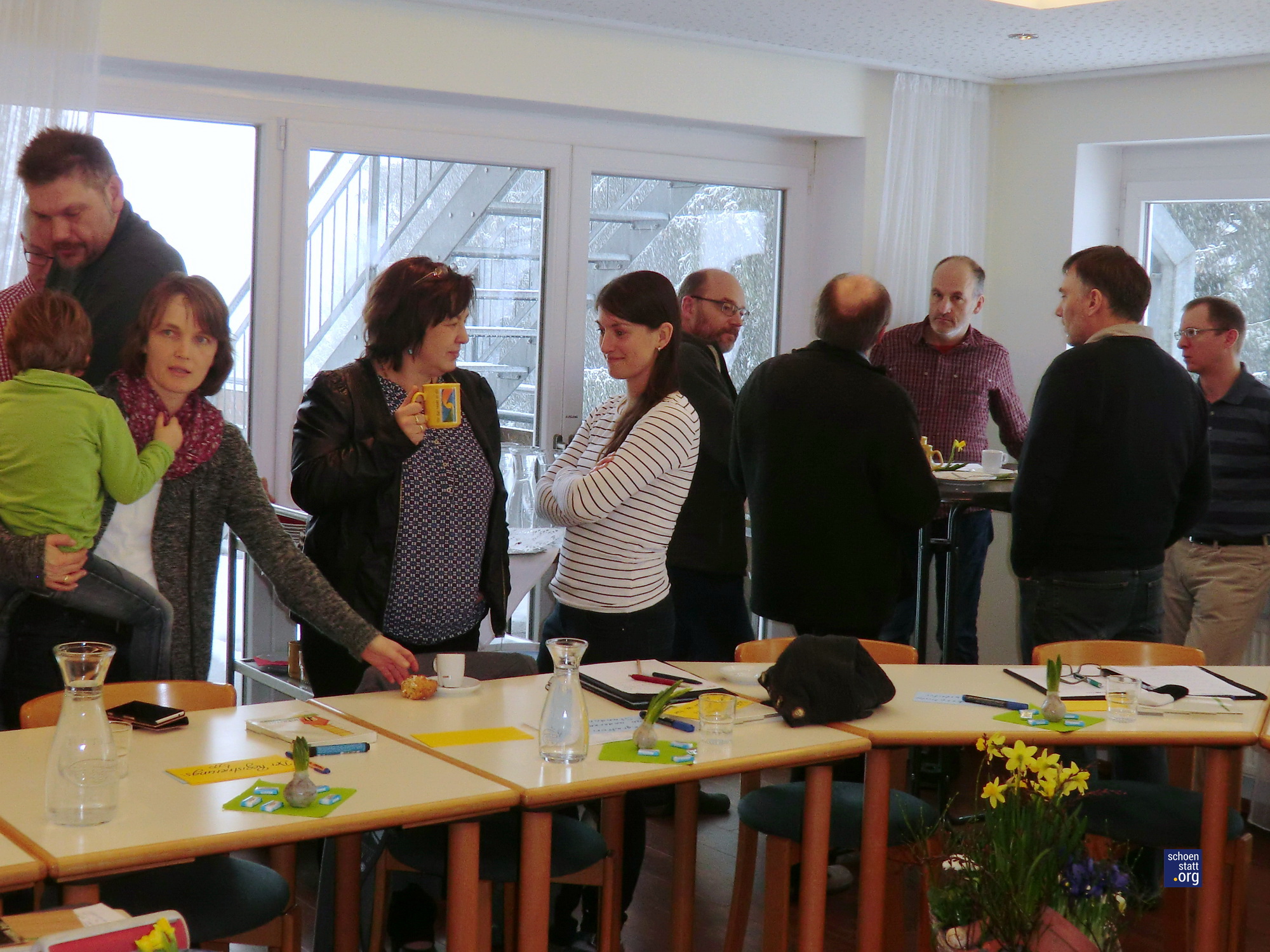 Success with the DIS method 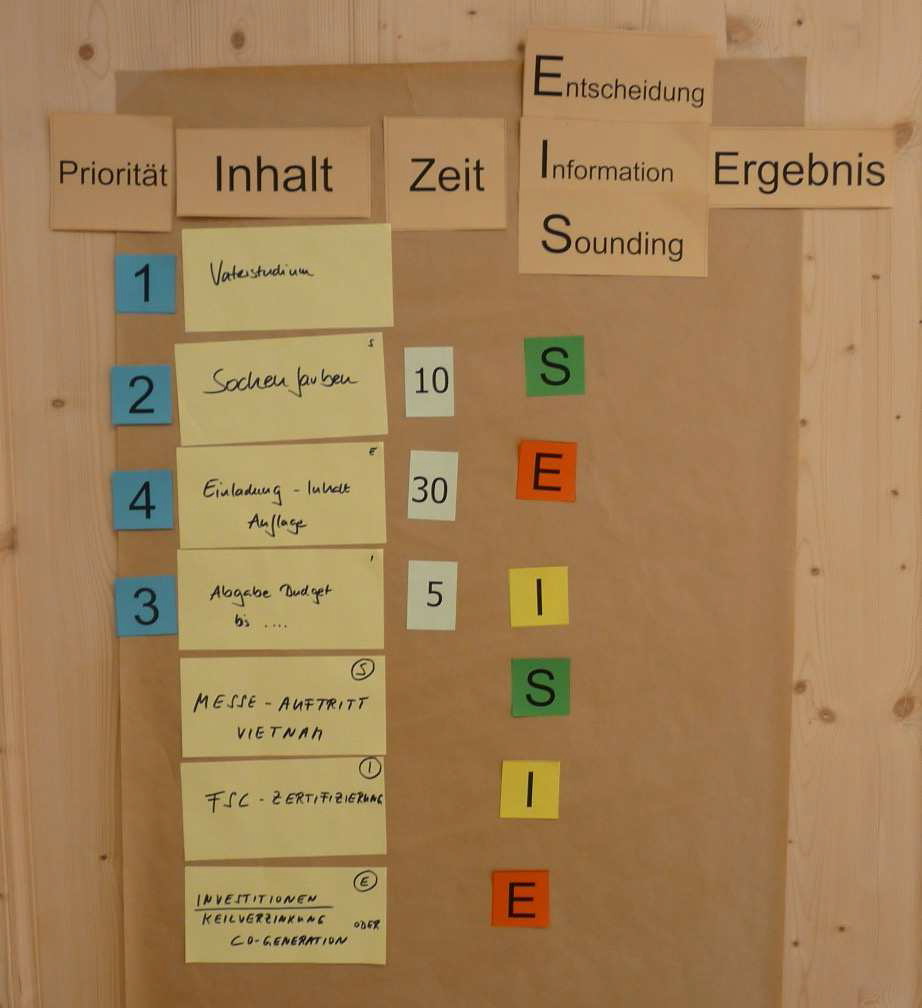 A colleague had to organise a meeting for about ten participants. It was planned to take two days and he had begun to draw up an agenda. His boss suggested that he try for once to use the DIB method (D=Decision, I=Information, S=Sounding: To start with each participants writes the point he wants discussed on a card and pins it on the board according to the DIB method. In this way the whole agenda for the meeting is drawn up. Further information will gladly be provided by the developers of this method.) After some hesitation the colleague agreed to dare it. In preparation for the meeting he simply sent the participants the subject, along with two or three relevant questions, so that they could already think about it.

At the beginning of the meeting all the points that were to be dealt with were written on the cards. Each participant was fully involved, because he could contribute “his” point. There were matters that were current and needed clarification, or decision or simply more information. When the colleagues returned to their offices they were completely satisfied. There had been limited time used in preparation, they had worked intensively, and the minutes and all the “to do’s” were already written up. No homework! “I’ll do that again, it was a stroke of genius!” was the answer to the question as to how things had gone.

We must have another “around the table” gathering

Leadership means enabling colleagues to work together. So it is strong on the level of facilitation, and works a great deal with the competence of the staff.

Just as Pope Francis said at the Synod last October to the Cardinals: Say whatever you like …, because I am present and without my saying anything, everything is safe. Because I hear it, and because I am present, it is protected. That is the main role of a leader. He has to enable very different people and experiences, and completely contradictory positions, to come together. 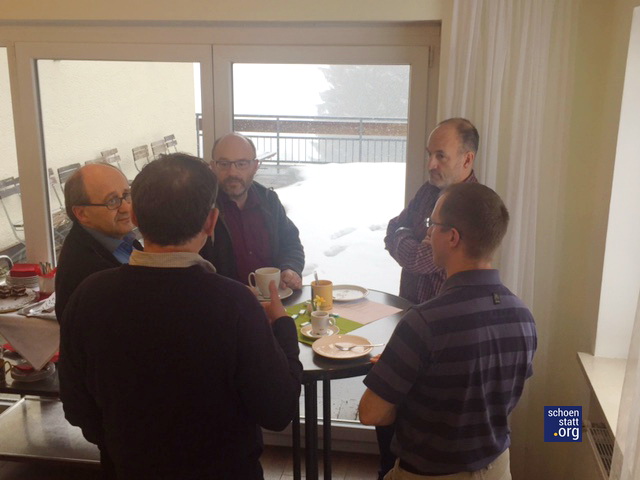 Integration of sections of a business

Last summer a company was restructured. Two areas were combined. The person responsible for the one area was given a new team. The problem was that all occupied the same site, except for one colleague who worked about two hours away. It was extremely difficult to integrate this colleague and there weren’t many operational points of contact. It felt as though he was still working for another company.

After a long discussion they hit upon the idea that each company has hereditary factors. What had happened?

The other area had been taken over seven years previously through an acquisition, but the businesses continued to be managed separately. While in their own company the culture was marked by the structure of a large concern, the company that had been taken over was a large family business. Even seven years after the acquisition the family culture was still strong, and was marked by short decision-making processes and a flexible approach. Each member of staff talked to everyone else even in different sections of the business. This didn’t fit in will with the structure of the large concern.

The decision was taken to combine the areas, and there were various ideas of how to support this: Working together on projects, inviting one another to Christmas parties, colleagues working for one week every month on the other site. No supervisory visits, but working together. This would help them to get to know each other better, and in the evening the could go out together and they could get to know, understand and value the culture of the other business. What could they learn from one another? During an acquisition it is possible to hurt people, and it can hang like a veil for years over colleagues and the whole business. These “hurts” had first to heal.

In his Victoria Patris talks in September 1967 Fr Kentenich said, “Let me pause here for a moment. The great question is: “How can I react to my weaknesses, my faults and sins, to my crippled state?” It doesn’t matter whether I am physically crippled, or whether I am ethically or religiously crippled. How can I respond?

(Fourthly): Don’t settle down! So don’t say, for example: That’s how things are, I can’t do anything else, let it be!

We want to win the victory over the Father’s kindness; through confessing and admitting our smallness we want to draw down the merciful love of God the Father in an unexampled way upon ourselves. That’s what matters. That is the masterstroke of our lives.

Now, in the midst of human life! Tackle it with both hands and fists! In my life! Centre on the God of everyday life.”

That is an extract from the texts that were read at the IKAF meeting in the first week of March in Memholz. Another text was taken from an Address of Pope Francis during his apostolic journey to Mexico. We dived into the subject of divine mercy, or rather, it was a first tentative attempt after we had dived into the subject, how do mercy and the economy, mercy and business fit together? A question that at first simply amazed us all … 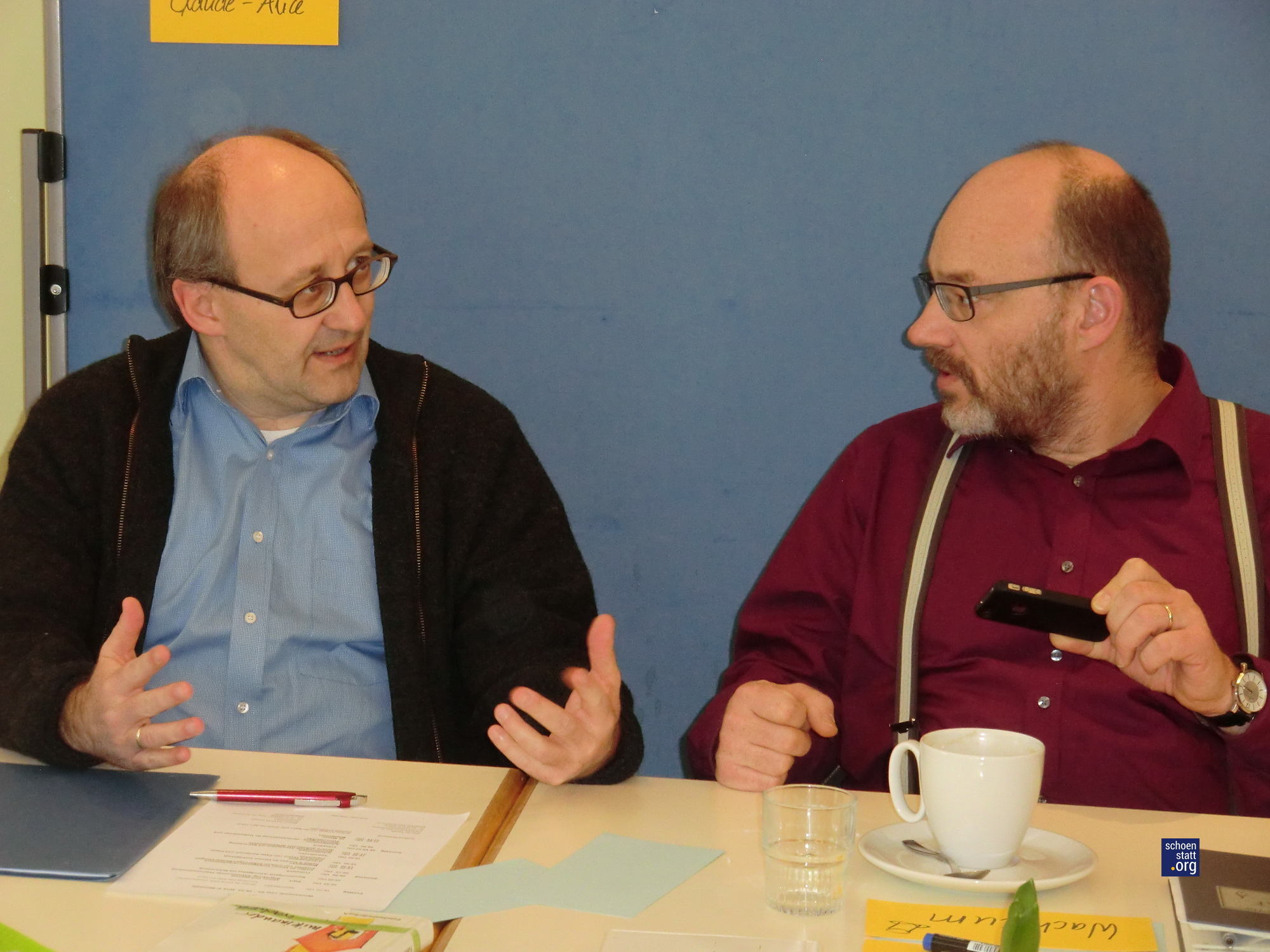