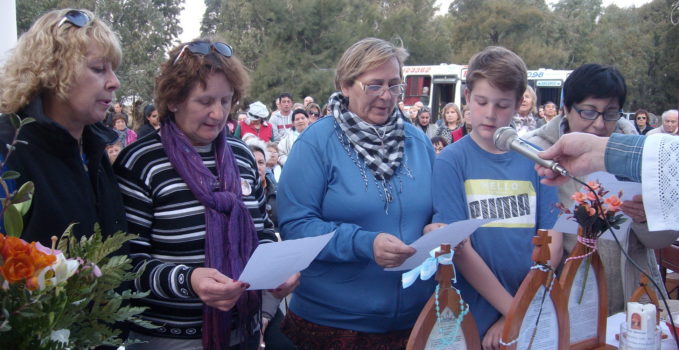 The Blessed Mother surprises us on every pilgrimage

Missionaries and pilgrims from the Archdiocese of Bahía Blanca joyfully went on pilgrimage to Mother of the People Shrine in Paso Mayor to celebrate the 66th Anniversary of the Schoenstatt Rosary Campaign.  Very early more than 700 people arrived by bus, vans, and cars.  Everyone arrived with the desire to give the Blessed Mother their bit of capital of grace with petitions, offerings and giving of self, achieved during the year.  The Blessed Mother knows that those who come do not come alone, but they bring their family, friends, neighbors and those whom they mission.

Among the pilgrims, those who traveled 220 kilometers (165.2 miles) by bus from Rio Colorado, Provincia de Río Negro stand out. There were children, missionaries, pilgrims, and three Canossian Sisters, the majority of who were visiting the Shrine for the first time.  They descended from the bus at the first entrance gate, and they walked almost a mile to pass through the Holy Gate and arrive at the Shrine.  They belonged to the neighboring Viedma Diocese, but they feel very united to Mother of the People Shrine, where many blessed Pilgrim Mothers have departed from, and in Río Colorado, they receive the Blessed Mother’s graces. 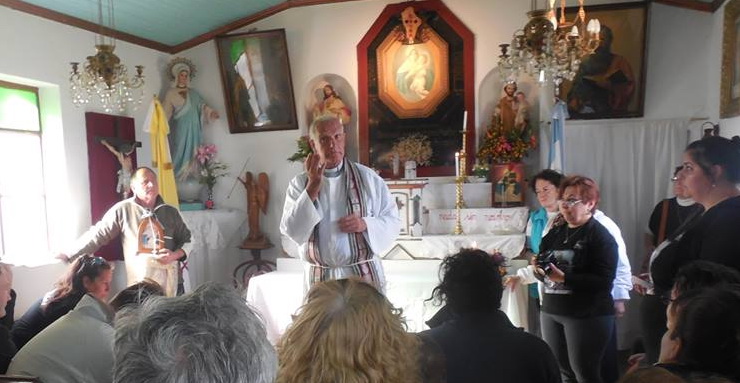 It was a beautiful Sunday in Father’s Hall. Missionary, Beatriz Piton, recounted the Shrine’s history, from Fr. Joseph Kentenich’s arrival in 1952, at Fr. Franz Maibach’s invitation. During this trip, Fr. Kentenich blessed the Shrine and enthroned the picture of the Blessed Mother he had especially brought from Germany, as he had promised the German settlers from Volga, who resided here.

Back in 1952, Mr. Luis Bartel had welcomed the Father and Founder in a beautiful procession of equestrians who escorted him to the Shrine, and providentially, he attended this year’s celebration. He too recounted about that historic day and the emotions experienced.  Mrs. Marta showed a small frame that held her father, Pablo Schubelbein’s, First Communion Scroll, which he received in the little chapel (now the Shrine) on 7 November 1927.

Mónica Ale referred to the Schoenstatt Rosary Campaign mission that Deacon Joao Luiz Pozzobon left us.  She emphasized the love and loyalty that he had for the Blessed Mother and the Shrine, how he took care that families, schools, and institutions received a picture of the Blessed Mother, and how this innovative way of Mary’s taking Jesus to her children expanded throughout the world.

“I sealed the Covenant of Love. I owe her what I am and what I have”

In the afternoon in a procession, they prayed four mysteries of the Rosary, passing through Joao Wayside Shrine’s Holy Gate and  the Shrine.  Frs. Daniel Jany, pastor of the Shrine, Juan D’Amico, Adviser of the Campaign, and Adrián Martínez, Schoenstatt Diocesan Priest, imparted the Sacrament of Reconciliation to those who requested it.  “The grace that I noticed most was seeing those who returned to the Sacrament of Reconciliation,” Ayelé Valle, from Rio Colorado related.  “To see young ladies who had not confessed for many years, another one since her First Communion, and they were happy they could receive Communion during the Mass. They loved everything, they are already inviting those who could not come, and they tell them they found great peace at this place of grace.”

At 4:00 p.m., Fr. Daniel was in charge of the Covenants of Love sealed in the Shrine. Three missionaries and three couples emotionally made their exchange of hearts with the Blessed Mother. Their families and friends who filled the Shrine accompanied them. 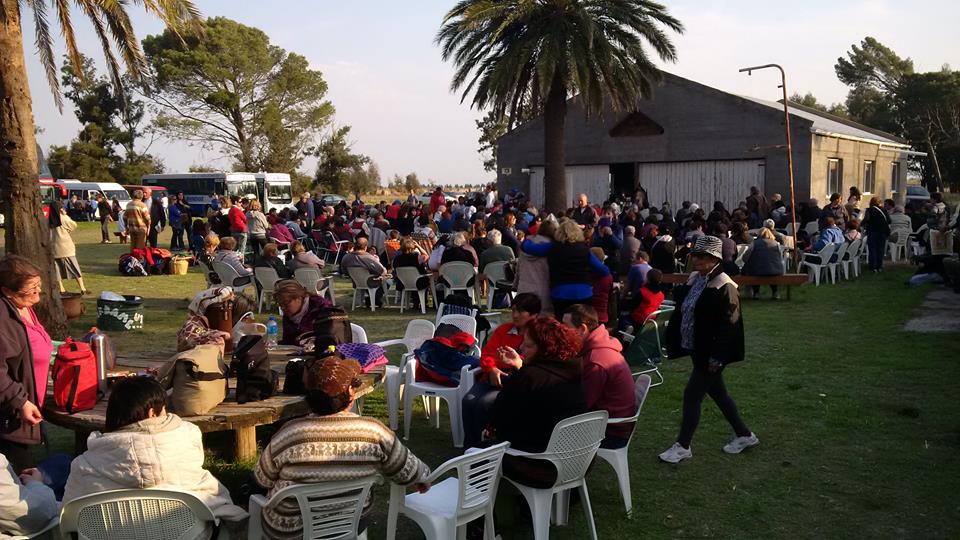 Throughout the day, the Mother of the People Shrine Family encountered brothers and sisters from the different places of the diocese.  The children played freely on this sunny land, and they shared lunch, mates (herbal tea), and cake at the buffet. Some took Shrine souvenirs, a picture of the Blessed Mother or the new and interesting books, medals and holy cards that the bookstore offers every year.

Fr. Mauro Barnabita, the parish priest from San Roque, visited the Blessed Mother in Bahía Blanca, and he was surprised by the Shrine life and that he knew many of the people. Truly it was a day of celebration for the family.  Ayelé also shared that “for me, it was an unforgettable gathering. It was gratifying for my soul to bring so many people to the Blessed Mother and to see how Providence worked in them.  My heart overflows with love for her, and now I want to prepare myself to seal my Covenant of Love. Thank you very much for making us feel at home.  The Schoenstatt Movement is truly a great Family. That is how it feels.”

Fr. Juan D’Amico celebrated Holy Mass under a clear sky among palm trees and singing birds. He read a paragraph from Evangelii Gaudium, where Pope Francis referred to the responsibility of the missionaries.  At the end of the celebration, they commissioned new Pilgrim Mothers to four missionaries and to a little missionary from Rio Colorado.

“She was present here among us, listening to and protecting us like a mother does with her children.”

Upon visiting the Paso Mayor Shrine on Sunday the 11th, Belén Erraquin from Coronel Dorrego had an experience that was closely linked to her family history.  We share her testimony:

“In 1990, when I was just 19 years old, I asked myself once and again, why my mother was going through this cruel illness, going in and out of surgery many times for three consecutive months.  She suffered great pain, and surely she knew that science could not help. She would find strength everyday to smile, express her gratitude, and pray for others.

It was only clear to me that in that picture of the Schoenstatt MTA, or as she called her –our Mother, she found strength and perhaps much more to face the illness that took her life. I remember her going through the hospital hall on a stretcher embracing the picture and writing that beautiful letter she wrote to her.

On 11 September 2016, I believe that I could understand and experience a little of what she felt.  Until then, when I looked at the picture it only generated peace, and for some reason it touched my heart. It also inspired tenderness in me to meet Edda and Pocho, the people who put this picture into my mother’s hands.

On this Sunday, the 11th, we decided to accompany Osvaldo, who is in poor health and who felt the need to go the Paso Mayor Shrine.

I cannot describe it, because I do not know, what they experienced, but I did perceive joy and peace in everyone when they arrived at this place.  Especially, after experiencing that peace and joy that I am talking about, while I looked at this very meaningful picture for me, I asked the Blessed Mother to be present and to fill each one of us with her grace, and that each one would find what they came to seek.

Suddenly an emotion that is hard to describe overcame me, I had the conviction that she was there present among us, listening to us, and protecting us like a mother does with her children, to the point that when I had to leave, I felt that I did not want to move from there.

Then, I got into the car saying to myself, this feeling is my mother’s legacy.  I hope that Osvaldo and everyone present experienced it. THANK YOU, MY MOTHER!

She is the Great Missionary.  From here, she will also work the great miracle of inner transformation.”