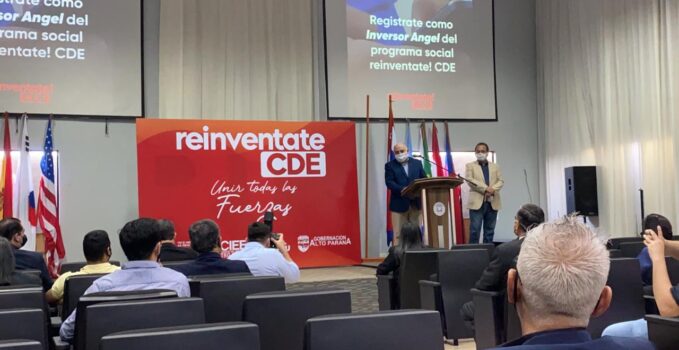 Posted On 2020-08-03 In Covenant Solidarity in Times of Coronavirus, Projects, Schoenstatt - Reaching out, works of mercy

“It was great. Many doors are opening for us,” says Juan Vicente Ramírez, just after the launch of the ¡Reinvéntate! Ciudad del Este, this Friday, July 24, 2020. ¡Reinvéntate! CdE is a social program for regional entrepreneurs, created and articulated from the support center of CIEES of Ciudad del Este, a non-profit organization that seeks economic reactivation after the crisis caused by the mandatory quarantine due to COVID-19. —

“Actually, the project called ¡Reinvéntate! CdE was born in CIEES”, affirms Juan Vicente Ramirez, a member of the Schoenstatt Family Work and CIEES (International Community of Schoenstatt Businesses and Executives), the soul and motor of several initiatives during the quarantine that has seriously affected Ciudad del Este and all the border region of Alto Paraná. “The CIEES of Ciudad del Este has created a support center for entrepreneurs and this support center, that is CIEES, brought together the Ministry of Industry and Commerce, the department’s government, the universities and the Social Program of Itaipu Binacional (the largest hydroelectric power plant in the Southern and Western hemispheres). We already have 60 mentors from the private sector and are looking to develop up to 1,000 projects in a very ambitious and intensive program that later on we want it to boost new companies and new jobs throughout the region.  This is the ¡Reinvéntate! CdE project, which was born in our CIEES group in Ciudad del Este, and it really is something spectacular, magnificent, where everyone is collaborating, all kinds of civil associations, chambers of commerce, entrepreneurs…  You can see the enthusiasm and the emotion. And, rightly so.

The International Community of Schoenstatt Entrepreneurs and Executives (CIEES) of Ciudad del Este, Alto Paraná, understanding the present context that cannot wait for a pandemic to simply end or for the government to create all the conditions, is facing a program for entrepreneurs through the support center of the CIEES, called “Reinvent yourself! CdE”.

Economists say that 2020 is a tactical year, and in a tactical approach, as opposed to a strategic approach, action must be swift and the results are expected almost immediately. This is what we need today in the face of the serious economic crisis that is afflicting us. 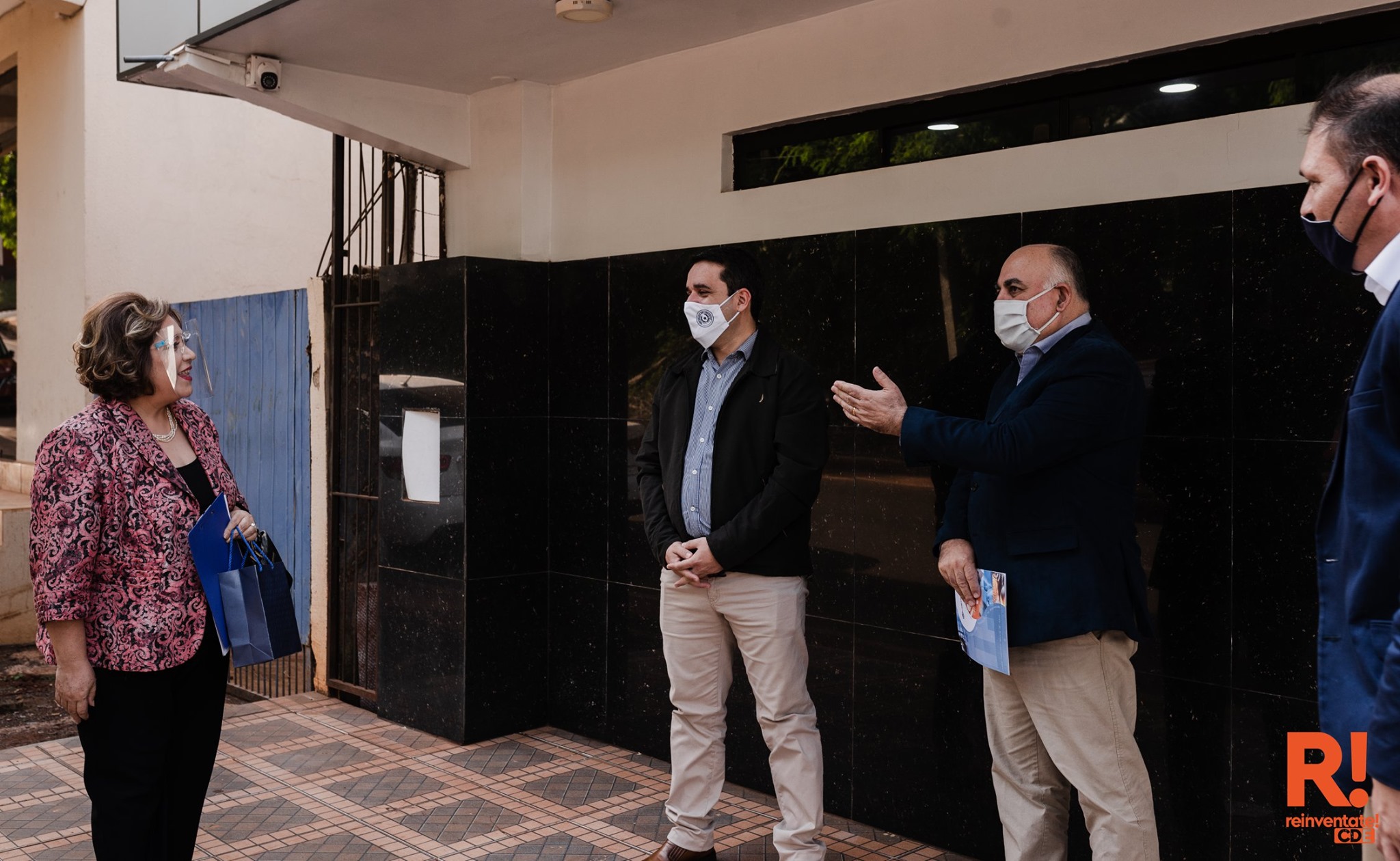 And that’s how the ¡Reinvéntate! CdE program emerged 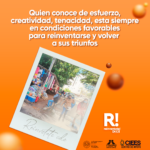 And that’s how the ¡Reinvéntate!CdE program emerged, in the middle of a pandemic, in record time we have managed to develop a necessary platform, which involves people and technology at the same time.

The idea is that the support center can be used for the emergence of entrepreneurs, whose strategy is intended to contribute to the economic reactivation of the Upper Paraná area, strongly hit by the COVID-19 crisis, especially Ciudad del Este (CDE), which basically depended on border trade, which came to a complete halt with the closure of the bridge linking Ciudad del Este to the city of Foz do Iguaçu in Brazil.

“From our organization, the International Community of Schoenstatt Businessmen and Executives – CIEES, we have set ourselves a well defined objective”, explains Juan Vicente Ramirez:

“To offer support and opportunities for personal growth in the world of work to those people who have lost their employees or who today are dependent on underemployment, or to those micro-entrepreneurs who had to close their businesses, or who perhaps need to revitalize them in some way. We think that the best way would be to direct this assistance through the creation of a Community Support Center for entrepreneurs.

Since the challenge is so big, since we estimate that about 75,000 people were affected in our region, we decided to join forces, as our slogan expresses, fortunately from the beginning we had an excellent reception from the Ministry of Industry and Commerce, Itaipu and our departmental government, thus making these institutions our pillars for the development of the program.

We knew that we had to involve all civil associations to be able to carry on ¡Reinvéntate! CdE, and that is how today we have the support of the main organizations of the private sector in the city. 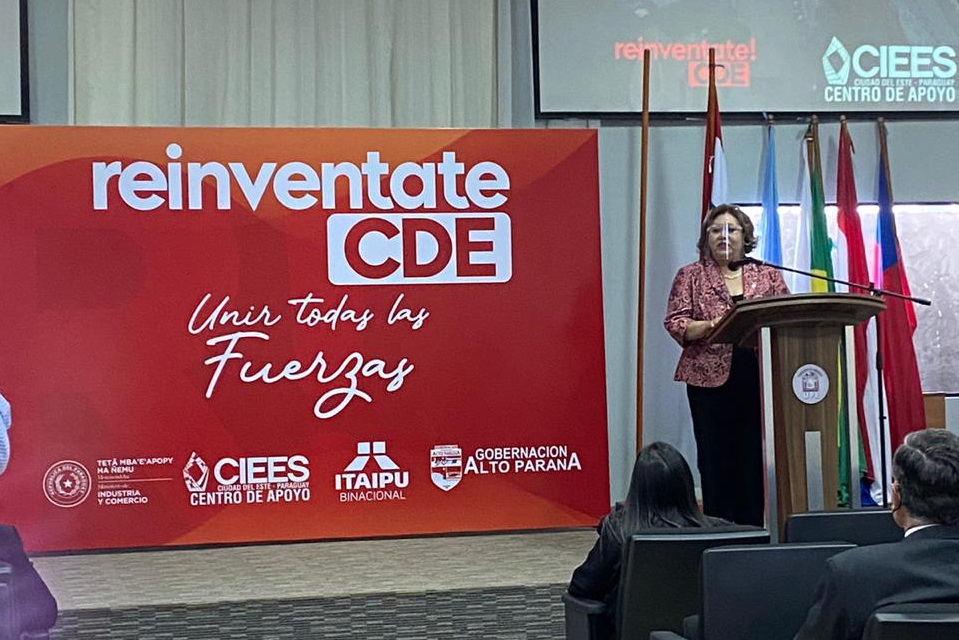 The great allies: mentors of great human quality and professionalism 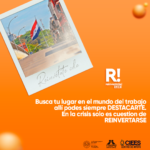 Our great allies are the mentors, people of great human quality and professionalism who will give their time and share their experiences and knowledge to assist the projects of the entrepreneurs.

Entrepreneurs will benefit from this free and open program aimed primarily at the entire regional population, which includes the four cities that make up our metropolitan region.

We will spend 100 intensive days at the CIEES Support Center, designing, shaping and fine-tuning hundreds of projects, which we hope will be successful in the commercial market.

We will help you in apparently basic things, but fundamental for an entrepreneur, such as training in financial areas, accounting, business plans, product design and their respective certifications, patents and qualifications needed to market new products. We seek to smooth out the curve of difficulty entrepreneurs face when formalizing their ideas; it is precisely this curve of difficulty that puts obstacles and demands on the first processes of setting up a new company, and that is when entrepreneurs finally give up their ideas and end up in some drawer for oblivion.

Together with the Ministry of Industry and Trade we will be giving them a personalized accompaniment to these steps and each mentor will apply his or her knowledge and experience there to accelerate the process. 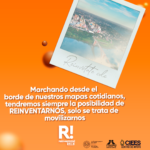 Something very important is that, in the final stage, we will seek to provide access or facilities to obtain the economic resources necessary to bring the projects to reality. These projects will become part of a gallery of approved projects and the idea is to have entrepreneurs who are graduates of the program who will be presenting their projects as investment opportunities. We know that the market is currently changing and that there are many entrepreneurs who are also looking to reinvent themselves and new ways of investing, looking for new business areas and opportunities.

Thus we will constitute the third element of investors, angel investors, local investors and other locations that will be analyzing these new projects and potentialities.

We will give the CIEES certification seal to the projects, as well as the legal framework to protect their innovative ideas through confidentiality and security contracts for both parties for the Entrepreneur and the Investor.

It is a project of good causes that I am sure will benefit many people who today need support to move forward, to realize their personal ideals in the world of work.

Finally, ¡Reinvéntate! CdE is a social community project, and the tool is at the disposal of the parties adhering to the program to continue building a better country, by joining forces. 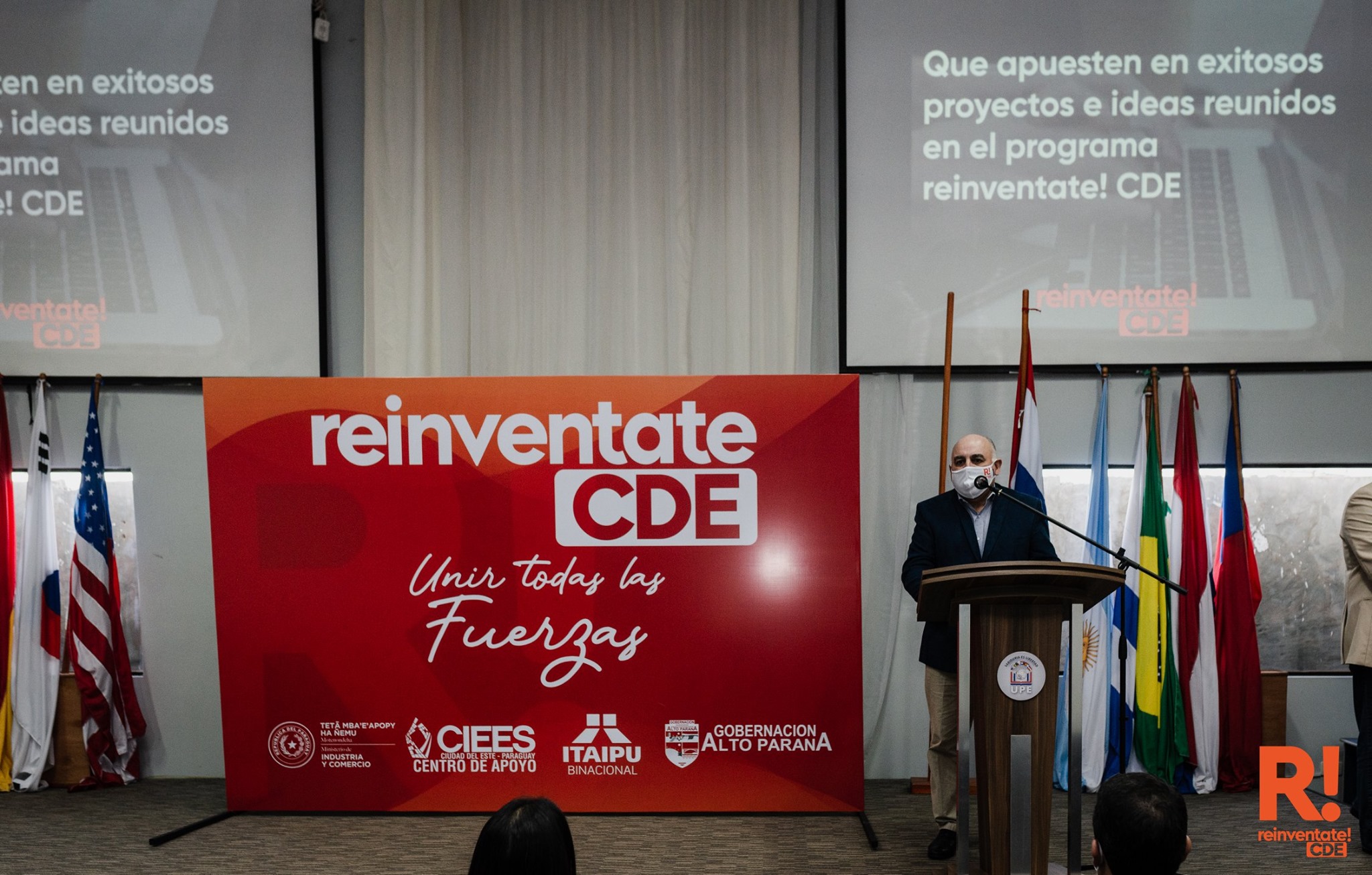 To realize their personal ideals in the world of work

“The foundation is Schoenstatt content, it is our mission,” comments Juan Vicente Ramirez. Schoenstatt inside. “Our motto is: to unite all forces, which is an expression cradled by Fr. Joseph Kentenich. “We go out to meet, to meet the need of the people who have lost their jobs, or have been harmed by the effects of the pandemic on the economy. We want these people to have the opportunity to take some decent money home, to be providers for their families, and also to realize their ideals and dreams, their Personal Ideals in the world of work, and that is what the program contains”.

On Wednesday July 22nd they presented the project to the CIEES group in Asunción in a videoconference. Next week, Juan Vicente Ramírez wants to request an audience to present the project at the international CIEES: “We also want this pilot plan to be contagious, and that it be done in other CIEES groups”. 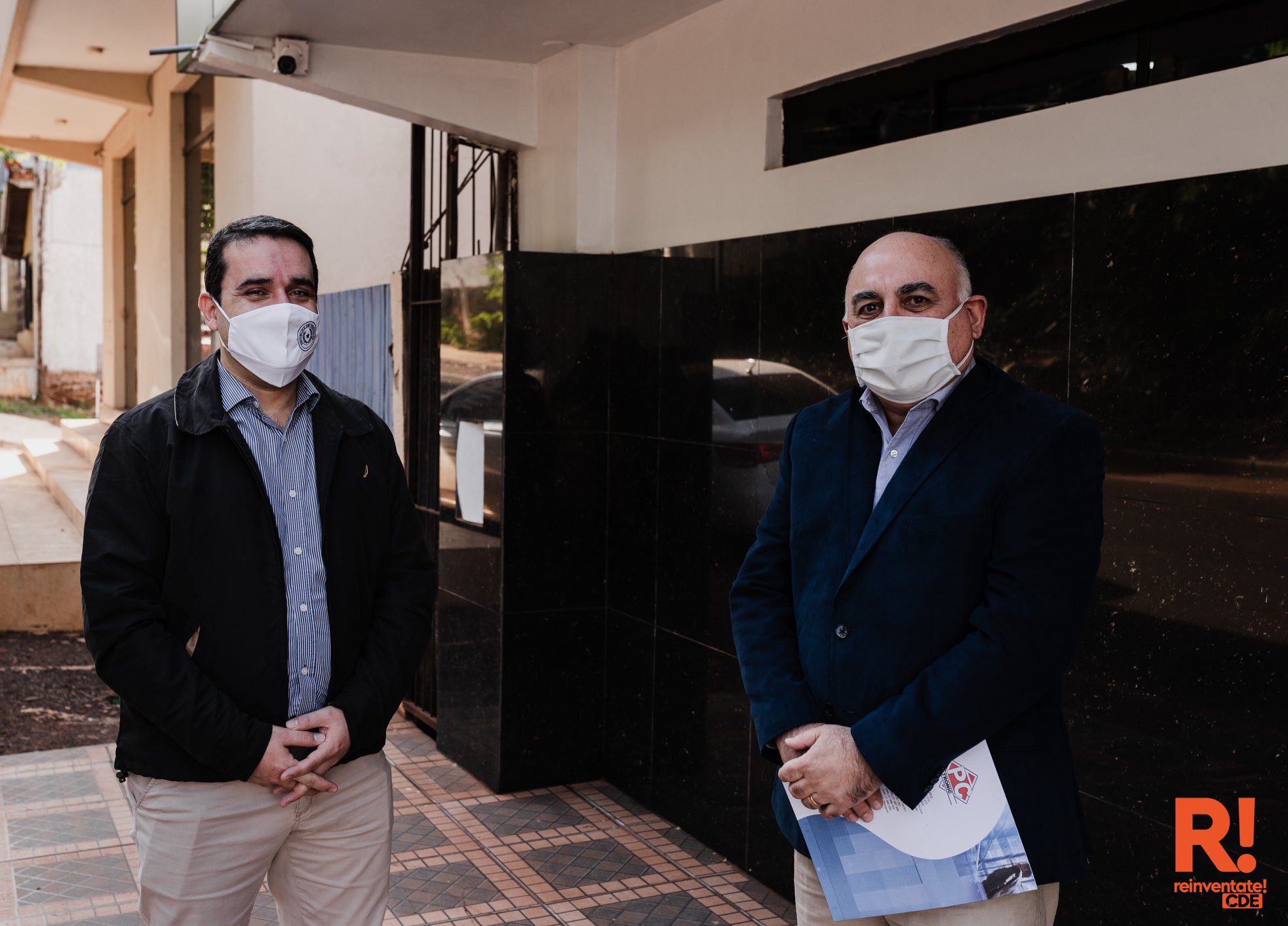 “We had meetings almost every day, we had meetings by Zoom, adding people, motivating them to participate. We explained to them entirely what the project is, presented the digital platform that is already on the Internet and which they can access and see how they can be part of this project. It is a tool that we provide to other associations and chambers. We do not want to be the owners; we want to put ourselves at the service of the people. In this way, we facilitate and encourage entrepreneurs to really make these ideas come true, these dreams they have inside, and that they cannot make concrete without the help of mentors, from the private and public sector, which will greatly facilitate the certification of companies, the formalization of the companies. Because we want to do everything within the formality and compliance with the laws, we do not want to create companies that do not pay taxes, that work in secret, we want to do everything in the light of truth and legality”.

It is a covenant. A covenant between mentors, entrepreneurs, investors, between people, institutions, it is a covenant of solidarity at the service of an entire region. A covenant that shows the contours of a post-pandemic world that will not be the same, that will be more human, more creative, more social.

“Now I am going to Mass, to my parish, to express my gratitude for the many blessings I have received,” Juan Ramírez tells me this Friday, July 24th.

Blessings received for a whole region, “thanks to the businessmen whose noble ideals lead them to contribute solutions, guiding the projects and ideas of the entrepreneurs, since they are experts in ‘Uniting all forces‘ (Joseph Kentenich)”.

More information (in Spanish) at: reinventatecde.com 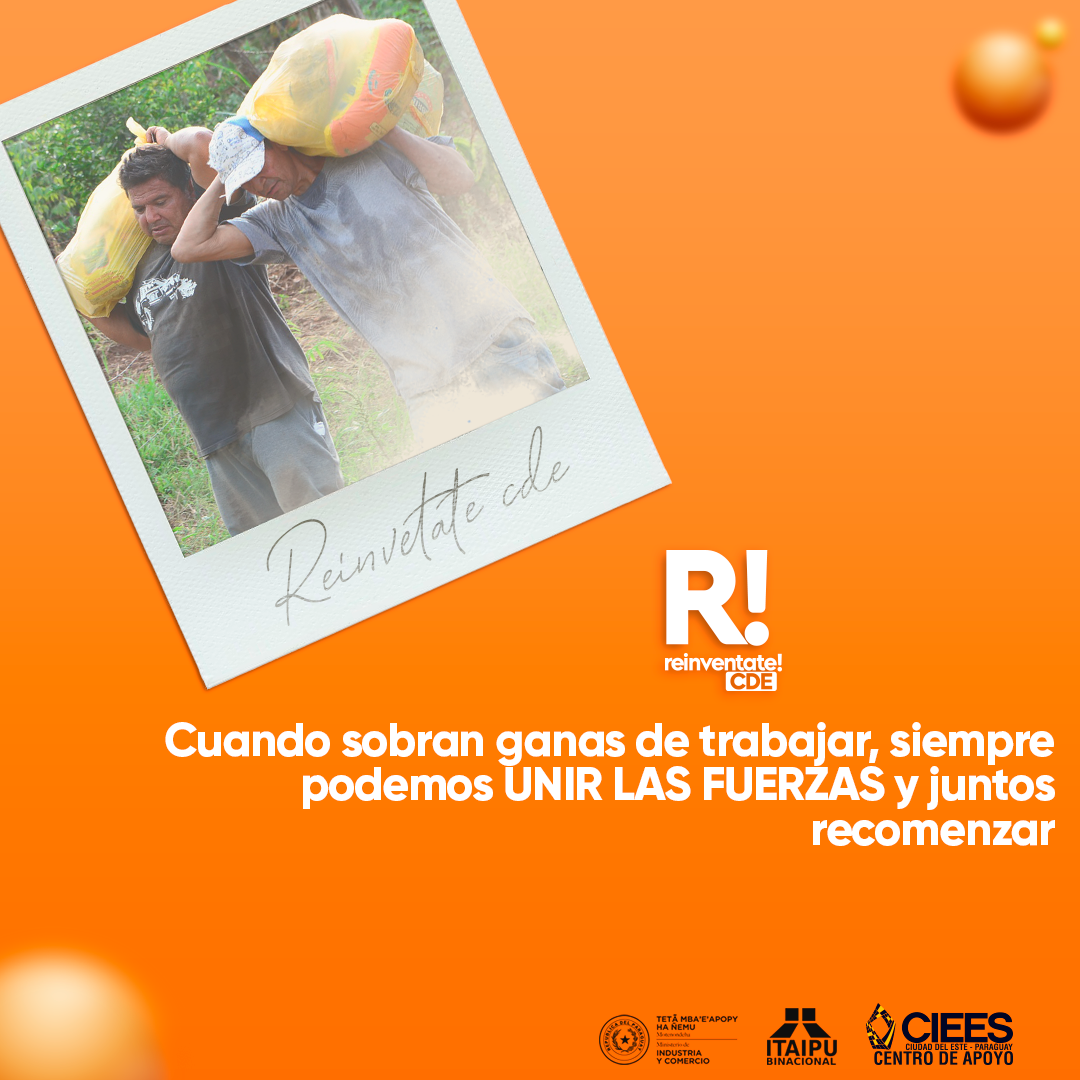