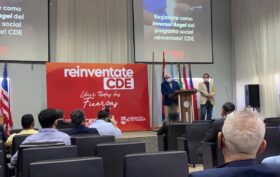 Posted On 03.08.2020In Covenant Solidarity in Times of Coronavirus, Projects, Schoenstatt - Reaching out, works of mercy

PARAGUAY, CIEES, Maria Fischer • “It was great. Many doors are opening for us,” says Juan Vicente Ramírez, just after the launch of the ¡Reinvéntate! Ciudad del Este, this Friday, July 24, 2020. ¡Reinvéntate! CdE is a social program for regional entrepreneurs, created and articulated from the support center of CIEES of Ciudad del Este, a non-profit organization that seeks economic reactivation after the crisis caused by the mandatory quarantine due to COVID-19. —   “Actually, the project called ¡Reinvéntate! CdE was born in CIEES”, affirms Juan Vicente Ramirez, aRead More