My Dachau becomes a Shrine

In October 2019 it will be 75 years since Father Kentenich founded Schoenstatt International in the Dachau concentration camp. An outwardly inconspicuous event, in a place that stands for an extent of human cruelty that goes beyond all imagination: Dachau, the concentration camp near Munich. —

And perhaps even beyond that

After the beginning of the Second World War, people from occupied territories in Europe were also imprisoned in Dachau concentration camp. It developed into a nucleus for new concentration camps, a place where the Nazi regime imprisoned, suppressed and murdered political opponents.  Of the total of at least 200,000 Dachau inmates, about 41,500 died. In addition, the SS frequently deported prisoners to extermination camps.

Father Kentenich was arrested in 1941 and taken to Dachau concentration camp for four years. There he began to spread Schoenstatt among his fellow prisoners, including Italians, Poles, Czechs and other nationalities. In 1944, he founded Schoenstatt International together with them.

The reading of this foundation requires the attention to the circumstances and the signs of the times under which it originated. He met priests from different European countries in his fellow prisoners. In this event, did God perhaps show him a way to add an international dimension and more dynamism to the work he began?

On October 18, 1944, In the pouring rain, Father Kentenich took a decisive step forward in the middle of the concentration camp: “…Until now it was a limited ministry. Now it goes beyond this scope and becomes international, the last step of the development, as it was already indicated in the First Founding Document: for our house, for the whole province and perhaps even beyond that…” 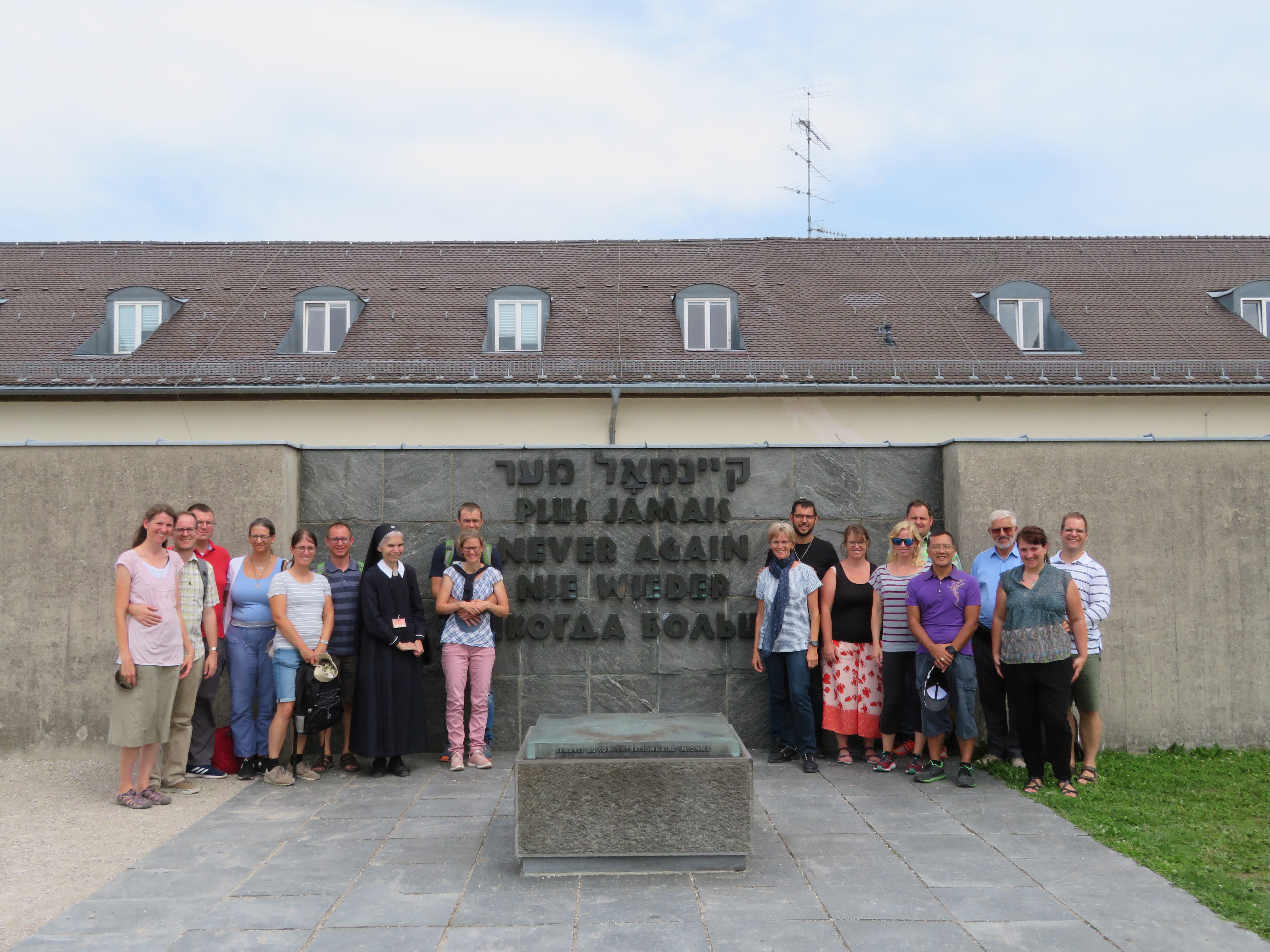 Why we go to Dachau

Since 1965, the Dachau concentration camp memorial site has been located on the site and is visited by around 800,000 people annually.

Among them were many Schoenstatters. They visited this place because the founder of the Movement, Father Joseph Kentenich, and many other Schoenstatters were imprisoned there. They go there because decisive steps were taken to found the Movement, precious literature was created, and the Covenant of Love passed the test of its suitability for daily use in the trenches of World War I, as it had done decades before. Because here it touched and transformed the extreme periphery. Because Mary walked in the hearts of her allies across the dirty streets of Dachau and through the stinking barracks, and touched human misery.

Some visit Dachau because they believe, know and feel that this place, with all its unimaginable horror, was and is a shrine. And because they know that this is not only something for the history of Schoenstatt, but an impulse, a challenge for now, for today, for every situation in which justice and dignity and freedom are trampled underfoot, from harbours closed to rescue ships in the Mediterranean and overcrowded youth prisons in Paraguay to the starving and beaten people in Venezuela.

“This year, some Schoenstatt groups from different countries have already visited or are planning to visit the concentration camp memorial,” said Sister M. Elinor Grimm. The Schoenstatt Sisters of Mary as well as Ilse Kessler from the Institute of the Women of Schoenstatt have the license as guides for the memorial sites and are authorized and willing to give guided tours with a Schoenstatt focus and to accompany Schoenstatt groups there. In non-German speaking groups, however, there must be someone who can translate.

A leaflet in several languages (German, English, Spanish, Portuguese) is available to all groups, and if someone is into “Shrine stamps”, then there is a Dachau Shrine stamp in the monastery shop near the Carmel chapel.

“In the vicinity of the Hoerde conference, more Schoenstatters from different countries came to Dachau, for example on August 14th the Mothers’ Federation from Texas and another mixed group from Brazil. Fr. Kessler Ilse, Institute Women of Schoenstatt, and I were on the road at the same time,” said Sister M. Elinor.

“A few days ago, Schoenstatt Mothers came from Croatia. This spring, for the first time, a group of pilgrims also came from France to visit the Max Mannheimer Haus, the youth hostel. I was able to accompany visitors from the Family Federation from the Czech Republic and Switzerland through the memorial. And don’t forget – in the heat of the day, the “Schoenstatt time” – young women from South America in the vocation program of the Sisters of Mary – made its way through Dachau, the same day in the afternoon it was the International Leadership School of the Schoenstatt Boys’ Youth. The heat was very bad for us, but it also gave us an idea of what it meant for the weakened prisoners.”

“Our course, the 3rd course Family Federation Switzerland, was very impressed by the visit to the Dachau concentration camp memorial on August 6, 2019. Some were there many years ago, but this time it was more intensive,” said Gabi Kiser. “Something really impressed us: In all the suffering, harassment and degradation, Father Kentenich remained a ‘man’ and preserved his dignity, for example by holding on to ‘you’, even when he was bullied. It touched and moved us all very much. Looking back, one man said: ‘I am still very touched by the visit to the memorial and very grateful that I was able to have this experience. Two things will remain in my memory: the realization that Father Kentenich, as an instrument of the Blessed Mother, could work unshakably even under the most disgusting circumstances, as they prevailed in Dachau Concentration Camp. Secondly, I now understand a little better why freedom is so important for him and why he was able to master the cruel everyday life in the concentration camp with inner freedom.'”.

A married couple confesses: “We were very touched by the visit to the Dachau concentration camp memorial site. Although we had already learned a lot about the place and the circumstances at that time, the personal visit were very valuable for us…Getting close to Father Kentenich’s life on the spot was a great gift for us. On the other hand, we were sobered by how people manage to be so cruel to others – and even more, how quickly we are prepared to close our eyes to the misery of others when it is uncomfortable – even today!”

“I often encourage visitors – most of them are students – at the memorial to consider whether and what we can do so that ‘never again’ becomes reality,” says Sr. M. Elinor. And here we are again at the beginning of this article.

And if it happens somewhere already?

And then be able to say: My Dachau becomes a shrine.