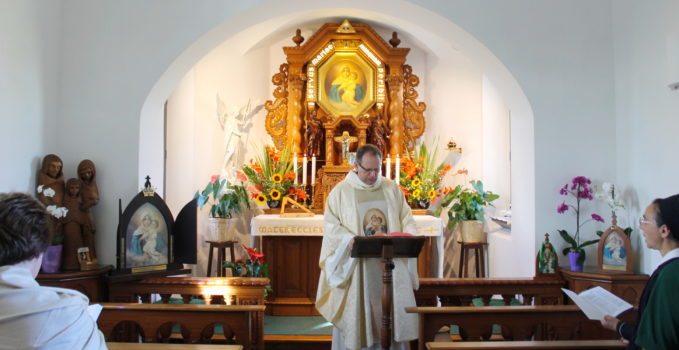 João Pozzobon: the grace to understand the origins and to be a pioneer of Schoenstatt reaching out

Wednesday, 7 September, Brazil’s Independence Day, a national holiday. Very early on that sunny day (not to mention the suffocating heat), it was also celebrated at the Shrine of all of us in Belmonte. For one hour, it became the Shrine of all Brazil. Fr. Marcelo Adriano Cervi, the future rector of the Shrine of Belmonte, Terezinha and Nivaldo Abram from Curitiba with their son who lives in Germany, and two Sisters of Mary from Brazil, who work in the Italian Schoenstatt Movement, were present.

They celebrated the Mass together, with typical songs and with the Eucharistic Prayer proper of Brazil, written for a Eucharistic Congress in the country. This is a national celebration during difficult times for their nation, and just a few days before the Schoenstatt Rosary Campaign’s anniversary, initiated on 10 September 1950, in Santa Maria, Brazil.

There was a Pilgrim Mother decorated with ribbons in Brazil’s colors on the side cabinet of the Shrine. This Pilgrim Mother had been on pilgrimage in Brazil, and Mr. and Mrs. Abram had brought it along to decorate room #105, Brazil’s room, in the Fr. Kentenich House at Belmonte. That day, the presentation was symbolic; when the house is ready to welcome the pilgrims, it will be definitely placed in the room. 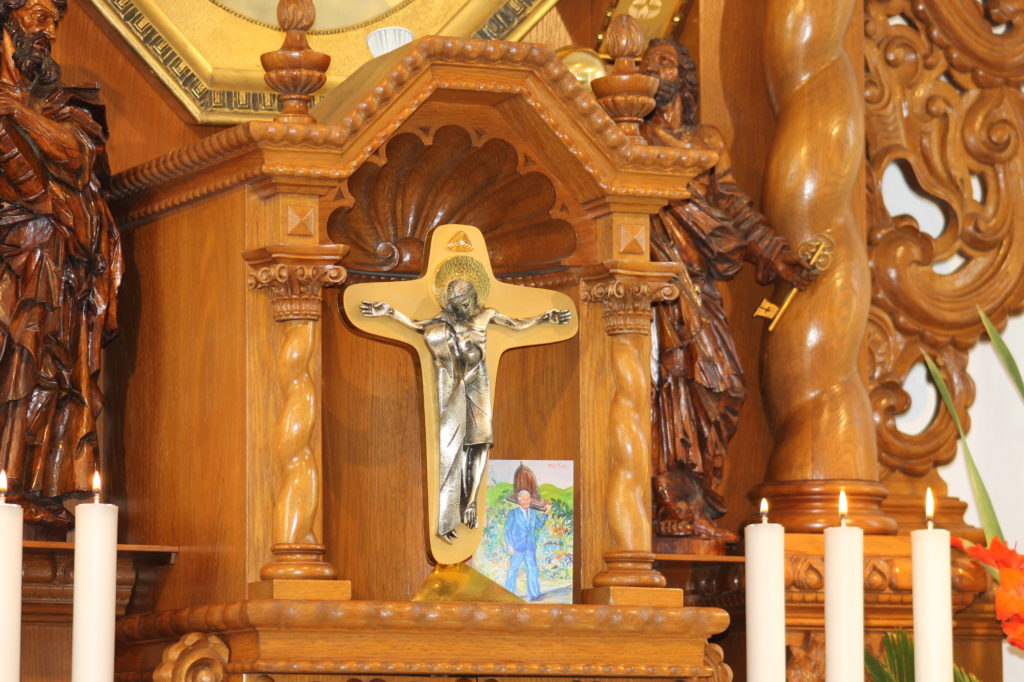 A model Schoenstatter for the second century

At the beginning of the Mass, Fr. Marcelo Cervi took the photo “João Pozzobon of Belmonte”, a photo of the painting created through the initiative of a group of missionaries from Argentina, who wanted to attach the Campaign to Belmonte. Fr. Marcelo placed it beside the Unity Cross in the Shrine.

He briefly explained that João possesses two important Schoenstatt graces in his person: the grace to “understand its origin” and the grace of reaching out (or the apostolate). With this, João becomes a model for Schoenstatt’s second century of the Covenant– a person who knows how to go to the ends of the earth, without forgetting the force that gives life and fruitfulness to all his work, the Covenant of Love Fr. Kentenich gave to us. And at the same time, he was a person who knew how to live deeply, from that Covenant of Love, without falling into the temptation of confusing the shrine with a sofa to remain there, taking it as a refuge of protection against the world…

All of this is in the painting depicting João Pozzobon, who went out joyfully with a firm step from the Belmonte Shrine to take the Schoenstatt message, to take Mary to the ends of the world, to the peripheries of society, and the Church.

The Mass ended with a hymn to Our Lady of Aparecida, the national patroness of Brazil. It could not be any other way, because a few days prior, a picture of Our Lady of Aparecida was installed in the gardens of the Pope’s house, and Francis stopped there for a few minutes before her for the blessing ceremony. “I am happy that Our Lady of Aparecida is in the gardens. In 2013, I had promised to return to Aparecida next year. I do not know if it will be possible, but at least now, she is here, much closer to me,” said the Pope, who invited Brazilian pilgrims who were present to sing to the Blessed Mother and to pray a Hail Mary. 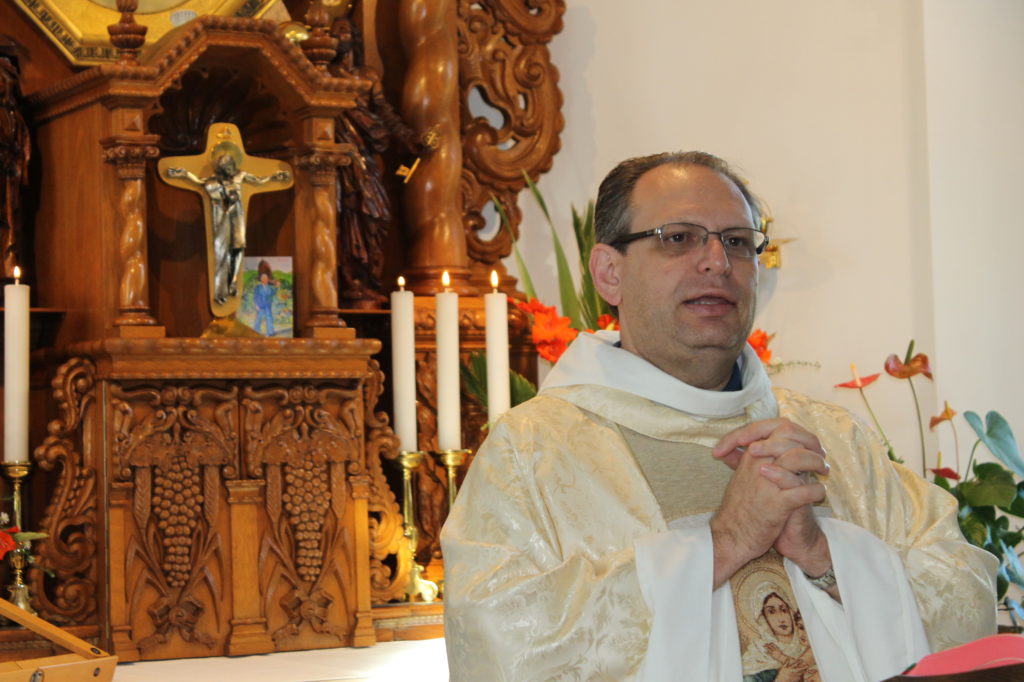 A pilgrimage to Room 105

All the people of Brazil, Pope Francis, Belmonte, and all the pilgrims who will one day stay in Brazil’s room were entrusted to Mary.

Passing through the João Pozzobon Hall, where the Novena booklet remains as a souvenir of the visit of the delegation from Argentina in June, everyone proceeded on pilgrimage to…the closed door of Brazil’s room. Nobody knew who closed it just on that day, but since grace passes through closed doors, they prayed and sang from the outside, and after a family breakfast, they left the Pilgrim Mother in the cabinet where symbols for the Argentinean room and the Pilgrim Mother for João Pozzobon Hall are already stored.

We do not know when the House will be ready for pilgrims –but the precious symbols of Schoenstatt’s enculturation from Australia, the Philippines, Argentina and Brazil – and soon from Switzerland are already here! 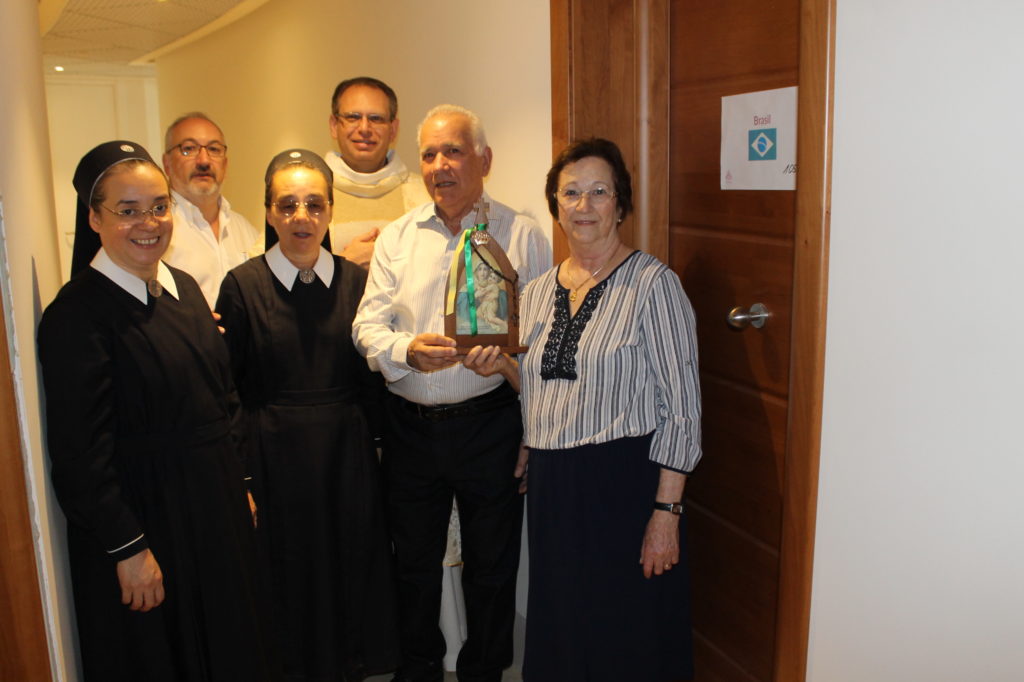 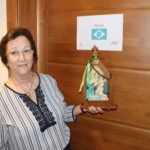 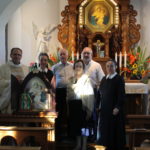 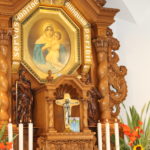 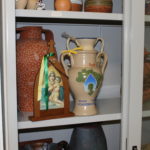 A room for each country