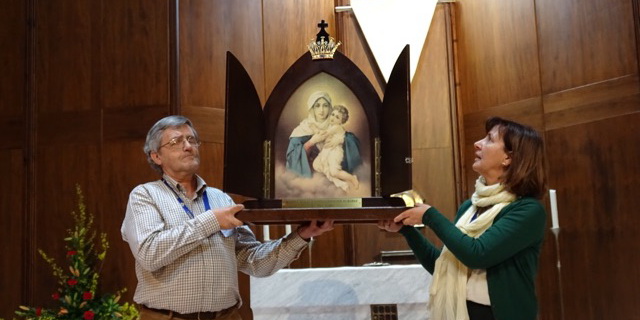 A European network passing on the faith

My attendance at the European Conference on the Pilgrim Mother Apostolate (= Schoenstatt Rosary Campaign), 16-18 March 2018,  in Schoenstatt was a last minute decision. I had been asked whether I could translate the keynote talks by Fr Walter and Sr Cacilda, who have been appointed to open a new international co-ordinating office for the Movement. Fr Walter is mainly based in Rome, and Sr Cacilda in Schoenstatt. Sr Marie Munz is the co-ordinator of the Pilgrim Mother in Germany and had the organisation of the conference in hand with her team. She invited me to attend the conference and Fr Bryan (Movement Director in England) agreed, so I went. — 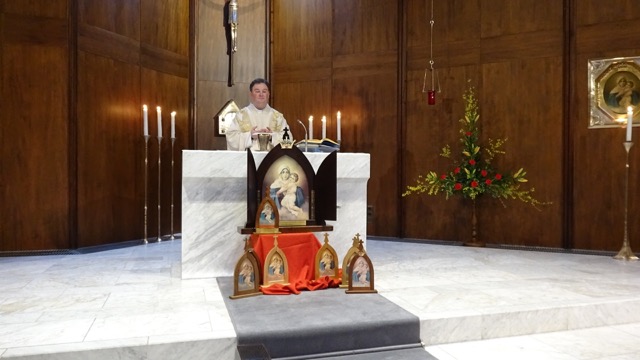 Seventeen countries were represented: Austria, Belgium, Croatia, Czech Republic, England, France, Germany, Italy, Luxemburg, Poland, Portugal, Rumania, Russia, Slovakia, Slovenia, Spain, Switzerland. Each participant was given a folder that also contained the names and countries of all present. I discovered that the people from Eastern Europe can speak good English.

What I soon realised was that for them all it was important that England was represented. I lost count of the number of times total strangers came up to me and said how happy someone from England was there. I was surprised and humbled. Unfortunately I had to miss the opening on Friday night, simply because it was too long and I needed my strength for the following day, and a number of the participants told me it had been too long for them. So I missed the introductions.

On Saturday morning we began with Mass in the house chapel in Marienland, a very joyful Mass in many languages. This was followed by a plentiful breakfast before we gathered in our room at 9.30 for Fr Walter’s talk entitled: Europe and the Voices of our Times. I will not try to summarise a very dense talk , but will highlight what struck me in particular. 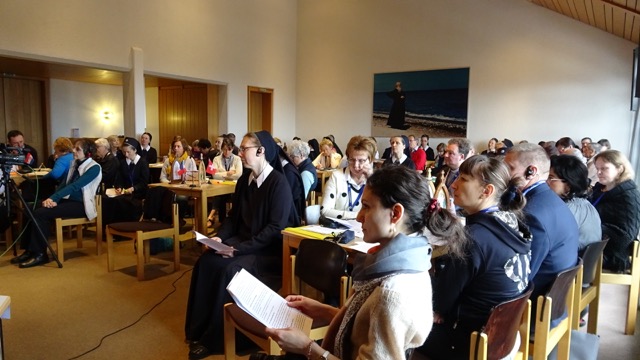 Europe, collapsing faith, and the rosary

Fr Kentenich said Schoenstatt had three great aims or objectives: the formation of the new person in the new community at the service of a universal apostolate; saving the original mission given to the West of passing on the faith to the whole world; building up and inspiring a federation of all apostolic communities in the Church.

The Pilgrim Mother apostolate serves the second objective: saving and passing on the faith through the time of collapse in which we find ourselves. Fr Kentenich foresaw that a turbulent time of disruption and collapse lay ahead, and among other upsurges of life in the Schoenstatt Movement, he confirmed that the Pilgrim Mother apostolate was capable of making a major contribution to pastoral practice. Why? The Rosary is a compendium of all we know about Jesus, and provides an access to him through his Mother. At the same time, through its connection with the shrine, the picture mediates the graces of the shrine: the grace of a home, of transformation and a mission. Joao Pozzobon experienced the transformation that came through the Pilgrim Mother’s visit, and this inspired him to keep going until the end of his life. As he said, if the people no longer come to the church, Mother and Son have to go to the people. There they repeat what they did in the home of Elizabeth and Zachariah: the mother began to prophesy, the father regained his speech and the child was sanctified even in the womb, as our founder put it so often. 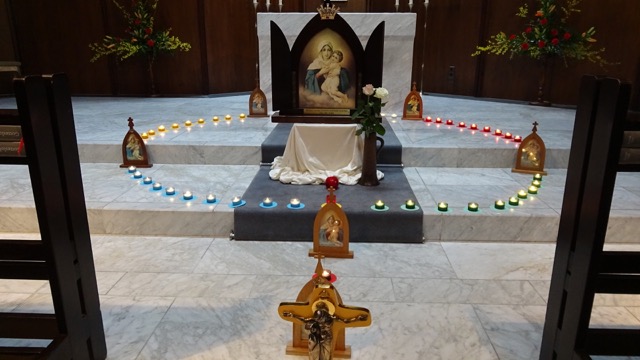 Illuminated Rosary, “imported” from the Schoenstatt Rosary Campaign in Argentina

In her talk Sr Cacilda told us, among many other things, what had happened in Brazil, where she comes from. For many years the Church experienced a collapse, with many of the faithful being attracted away to evangelical and Pentecostal churches and sects. Now, through the Pilgrim Mother, parish after parish is being revived and the people are returning. There are also many converts. Why? The Pilgrim Mother builds a network in which people again feel at home. They can also express their faith in their own way, spontaneously, enthusiastically, informally. Through the Rosary they discover greater depths of faith than they encounter elsewhere, and are gradually drawn back to the fullness of the faith.

During Sr Cacilda’s talk we broke for lunch, then at 2.30 p.m. we prayed the Rosary of Lights (=Illuminated Rosary, originally from the Schoenstatt Rosary Campaign in Argentina, inspired by Father Kentenich‘s talk in 1949 in Villa Ballester on praying and living the rosary) in the house chapel – the first time I experienced it. We then returned to our room for the rest of Sr Cacilda’s talk and discussion: What did we find important? It was interesting to see how the emphasis changed depending on country, but all were on fire to do more, to do better. The missionary zeal is heart-warming. 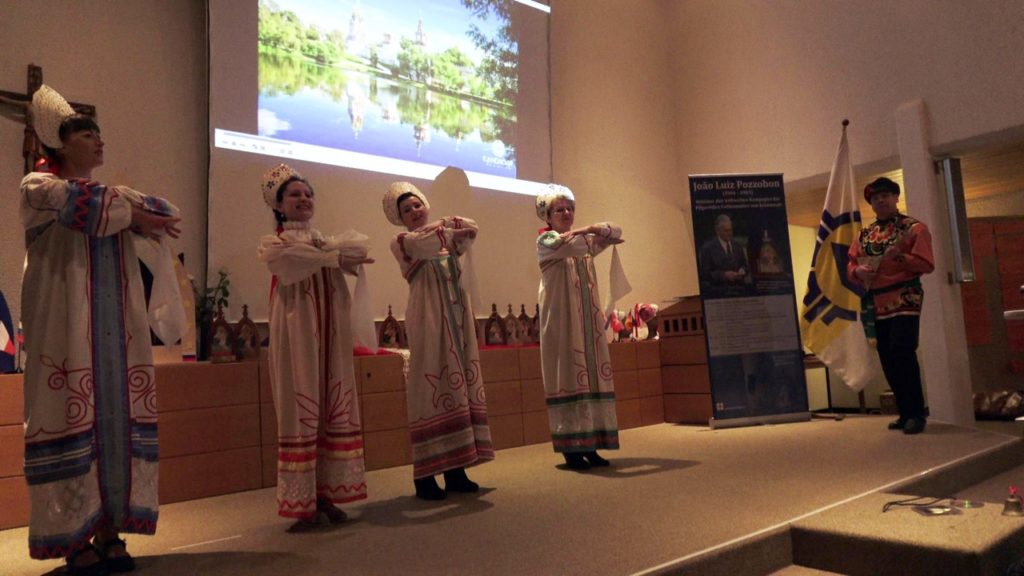 Cossack Dance and God save the Queen

Having worked so hard, we broke for a European Buffet supper. My goodness, how did they get all these goodies here? Outside the dining room there were long tables groaning under a collection of sweet and savoury delicacies, and in the dining room were all sorts of national specialties. It was difficult to make a choice from all the breads, meats and cheeses. Afterwards there was plenty left, but I heard that after our evening session, even most of that disappeared. Of course, there was nothing from the UK!

The evening was billed as a “Cultural Evening”. The Croatian group had it in hand, and each country was called upon to make a contribution. The Russians had spent ages practicing their Cossack dance, for which they had co-opted one of the Polish women. They also had one of the Russian dolls that fit into each other. Some of the acts brought the house down and it was lovely to see how people from different countries joined in. I didn’t expect to be called up, but England had to appear, and on the spur of the moment I could only think if singing “God save the Queen”. Everyone joined in, such was the spirit. In the end we created a chain of lights, which was placed before the pictures of our MTA and founder. 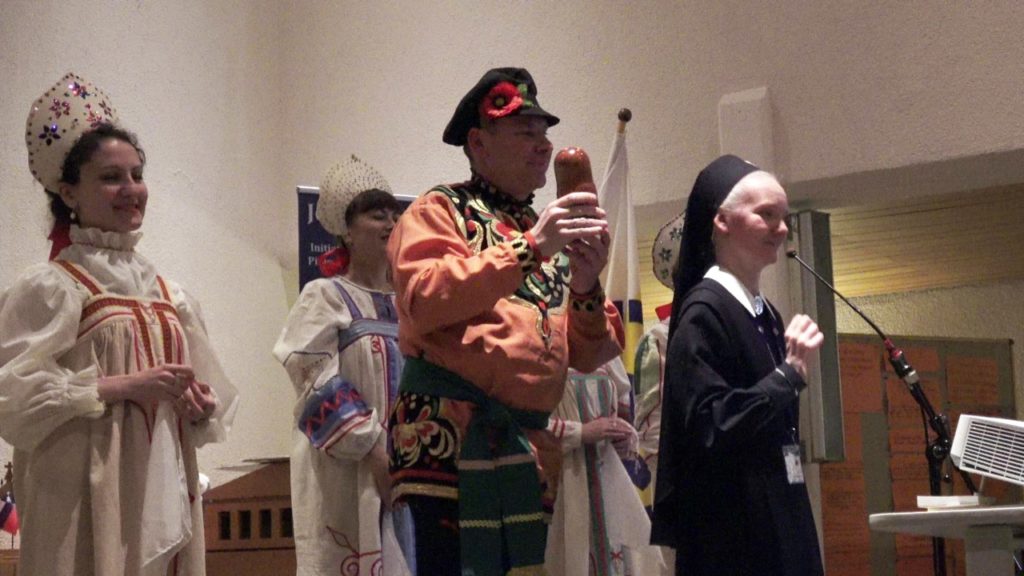 Commissioning in the Original Shrine

My friends had been filming the whole day, and also filmed the evening, so we all went home together. It was freezing (minus 5 Celsius) and almost 11 p.m. Fortunately many of the participants wanted to attend the Clothing ceremony of five novices of the Sisters on Sunday morning, so we were free till midday. After lunch we brainstormed in small groups as we looked into the future. The contributions were so good, but varied, that the organisers will have to sum them up later and give us the feedback.

At 3 p.m. we were packed into the Original Shrine for the closing commissioning and blessing. Each country received a small crown with the words: Nothing without you, MTA, to which each representative replied: Nothing without us! Each in our own language. We renewed the covenant of love and then each country said: She is the Great Missionary, she will work wonders! A saying of Vincent Pallotti that was taken up by Fr. Kentenich and Joao Pozzobon. The Pilgrim Mother WILL work wonders if we let her use us as her instruments.

We all gathered at the heroes’ graves next to the shrine for the group photograph, then we had to say goodbye. My friends remarked that you would never have guessed that a large group of strangers from very different countries had met for the first time only that weekend. They certainly separated as friends.